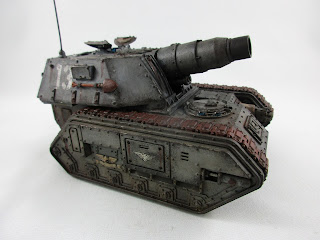 Legio-Con is approaching and Conscript Greg and I are putting on a couple of games for the masses. One is a Warhammer 40K game set in 813 M.41, early in the 17-year siege of Vraks, an Imperial armoury world that's essentially a weapons locker and staging area for the Imperial Guard. 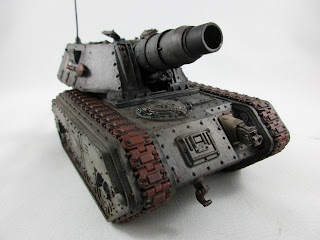 The Apostate Cardinal Xaphan marshalled hordes of fanatical Renegade followers on Vraks, including uncounted regiments of the Imperial Guard stationed there. Our game will depict part of the final battle for the Citadel on Vraks, with loyal Guardsmen defending to the last, hoping against hope for rescue from an airmobile elite Guard unit operating in the area. Those troops have a different objective, however: rescuing the Imperial Commander-Governor of Vraks and ensuring that the arming codes for the virus bombs remaining in the armoury don't fall into Renegade hands. 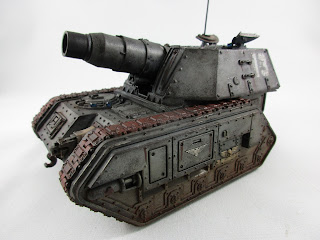 ANYWAY... Greg is bringing his Vostroyan Guardsmen and Elysian drop-troopers to form the Loyalist forces, and I'm supplying the Renegades, which has given me some impetus to finish a few outstanding projects for that army. Chief among these was the Forge World Armageddon-Pattern Medusa kit that I've had now for a couple years (!). 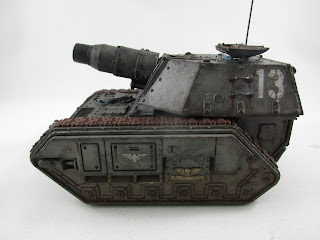 I have to say at the outset that this kit, WHICH I OBTAINED DIRECTLY FROM FORGE WORLD IN NOTTINGHAM, UK (lest there be any confusion on the point) was the absolute worst resin kit I've ever had to build. I love the design of the vehicle - it's very Wespe-like - but it was a pile of hot garbage to build. The parts weren't misshapen or warped, for the most part, but were just not well designed for assembly with the base plastic Chimera kit. 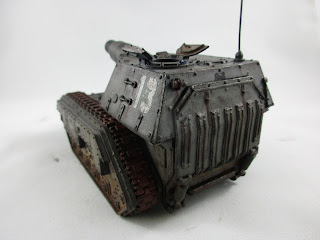 Add to this the fact that there were absolutely no instructions provided, and you have a recipe for hobby rage. 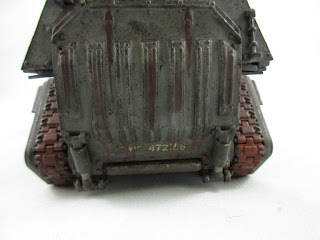 In any case, it's built now and I'm pretty pleased with how it turned out. 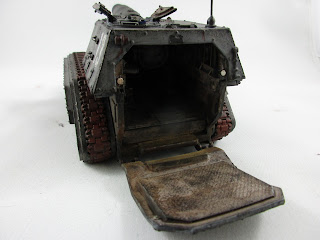 While I wouldn't bother scratch-building a vehicle interior myself, the kit included some nice, albeit ill-fitting, interior details for the Chimera hull (probably, in hindsight, this is where the kit designers started to go wrong). I painted these using Citadel Rakarth Flesh and Leadbelcher, copiously sponge chipped, then sealed with a wash of Agrax Earthshade. I also had to scratch-build new hinge pieces for the rear door (the kit parts were too misshapen to use) and fitted some tiny magnets to hold the door closed. 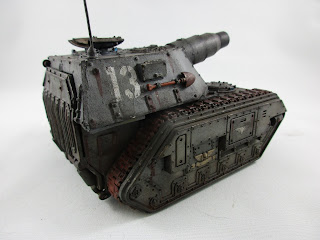 I think "menacing" is the word for this vehicle... 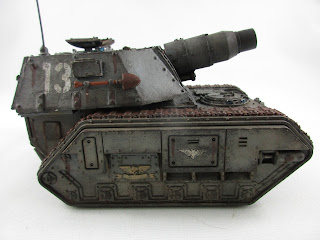 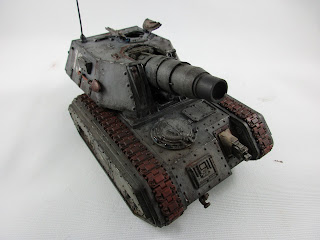 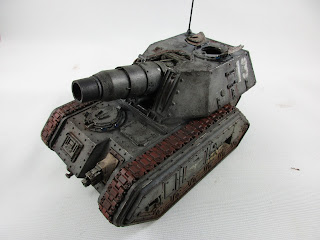 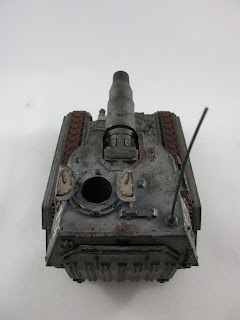 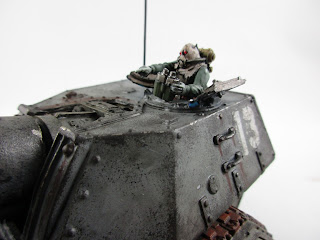 Since I built the kit with the top hatch open, I needed to fit a commander... this one is built from a Renegade torso with regular plastic Guard legs and arms. I painted his tunic field grey, similar to the rest of the force, but different from the Leman Russ commander who gets a full camo oversuit. My rationale follows the example of the German army in WW2, where the tankers wore special black or camo suits and the assault gun and self-propelled artillery crews wore field grey. 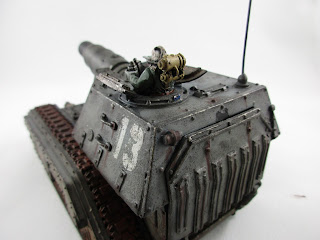 In stark contrast to assembly, painting the beast was straightforward and enjoyable. I basecoated with Mechanicus Standard Grey and drew it up to a mix of MSG and Celestra Grey. After applying decals (thanks Greg), I chipped the Hell out of the paint with a sponge, followed by a Nuln Oil wash to bring it back together. Some rust streaking with pigment mixed in solvent, and a final dusting of powders finished the job. Lenses were painted and glossed. 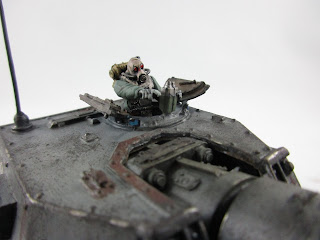 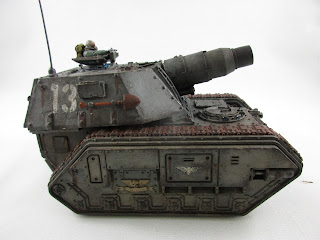 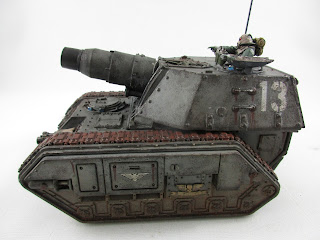 I'm really looking forward to the game with this vehicle. Yes, it will probably get destroyed on the first turn, but seeing it on the table will be cool. And while I would paint another one in a second, I hope never to build one again.
Posted by Dallas at 11:28 AM

Brilliant work Dallas - this looks awesome. Can't wait to see it flatten whole piles of troops (friend or foe) with pie plate blasts on the table.

Wow, that is an awesome looking vehicle. You did a brilliant job on it Dallas, especially with the challenge of dealing with the base kit.