Next in the painting queue was a maglev train from BP Laser. It's a cool, massive MDF kit, with about 5' of track, and the tender and 3 flatbed cars around 4' long. The photo below, from their website, shows what it looks like when assembled, without paint.

The kit is great; all the MDF parts are cut out cleanly and fit together well. BP Laser provides detailed assembly instructions as downloadable PDFs.  I was impressed by all the clear parts for the various windows; they are slightly beveled on the edges, so they can press fit very snugly into their locations without glue (after all the painting is done).

Below is a photo of the completed train, sitting on its rail near the edge of my urban table. 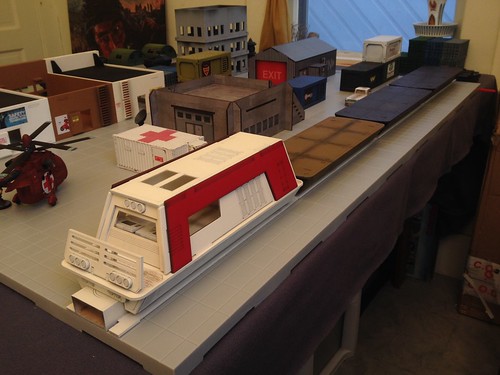 The tender is striking, with finely cut details. 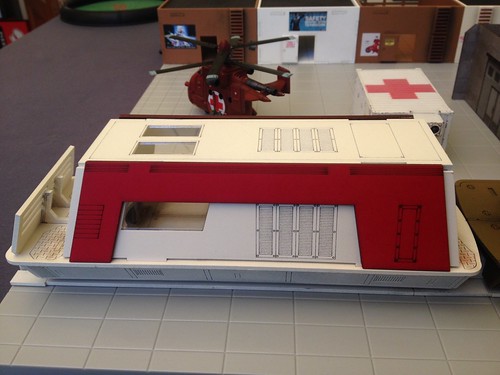 I painted and slightly weathered the three flatbed cars. I painted them in different colours. I figured that in the future the various evil corporations represented on my table would still have some of their own "rolling stock" (floating stock?), which would be connected together to form cargo trains. 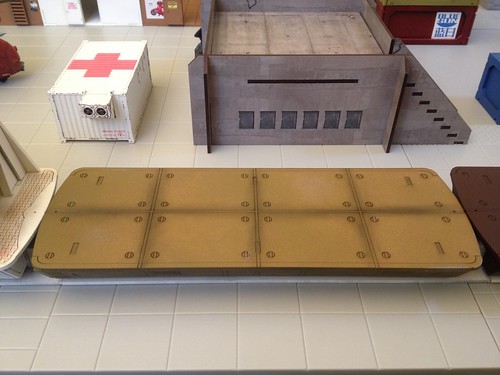 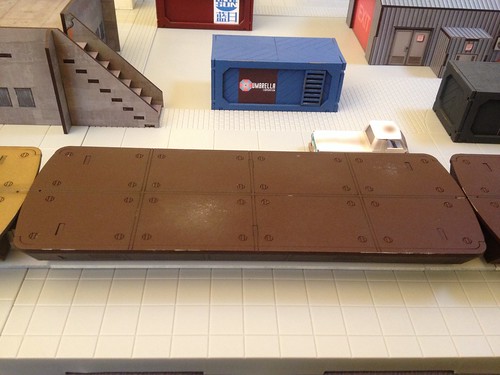 There are 5 laser cut plastic windows located around the front of the tender. After painting, I test fit them with their protective paper covering still on. I removed the paper, then, wearing nitrile gloves (to avoid finger prints), carefully press fit them into the openings. 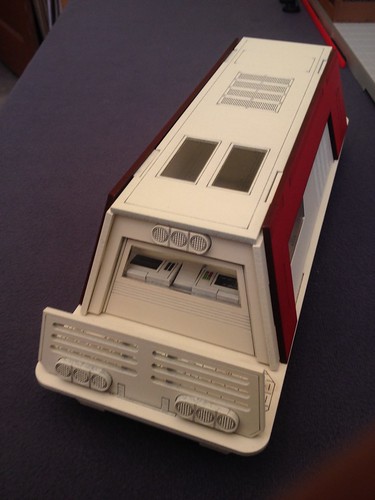 The roof comes off so you can have fights inside the tender. I left off some parts, like the tender's rear door, the drivers' seats, and the couplers, for easier for placement of figures. 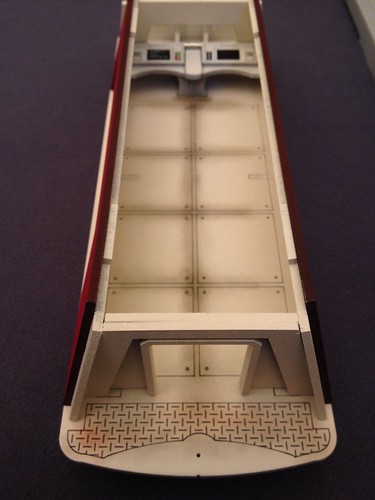 I freehand painted the control panel as if the left console was active. 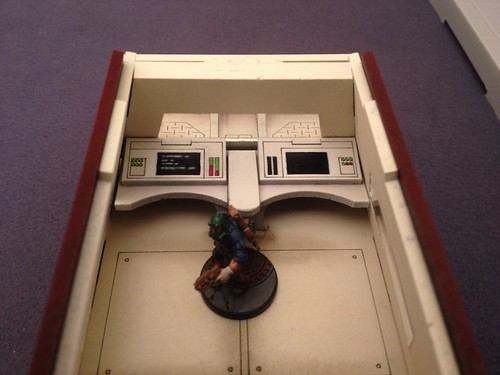 Also threw some light weathering around the base of the rail sections. 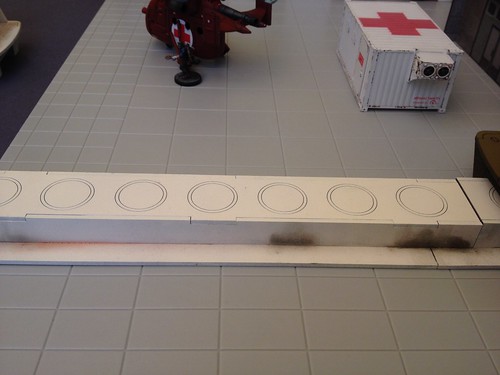 Here is a shot of the train loaded with cargo, with a 28mm Vanguard Samaritan standing on the nearest flatbed for scale. 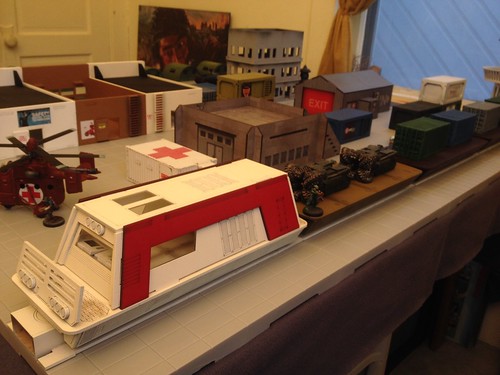 This model is a significant addition to my stock of near/future terrain. As with the other buildings and pieces, it will be useful for various sci-fi games.

I am now ready to run the next two scenarios in my ongoing Sedition Wars Outbreak Campaign. The first is a race to the train (using probably just the tender and two flatbeds), followed by a running gunfight on the full train itself!

Yesterday I received in the mail yet another addition to the pile of sci-fi gaming stuff. It's a 1/48 scale air ambulance from Dust Studios that I found on eBay. It's a funky design, created for their Dust Tactics miniatures game, This model is part of their "Premium Edition" line, so it comes fully painted and weathered.  To me, the "Weird War II" aesthetic makes the model usable for all kinds of sci-fi backgrounds. It could be used as an active gaming piece, as a scenario objective, or just as a neat bit of terrain for Sedition Wars, Infinity, 40K, Gunschwarm, etc. 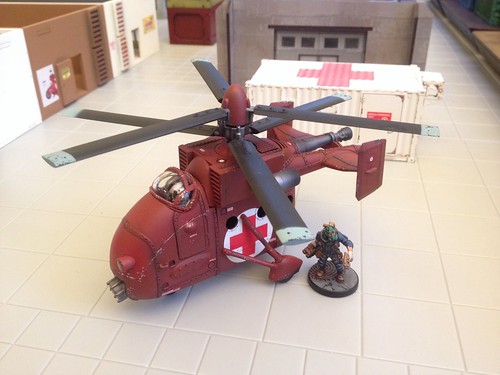 As much as I am not a fan of SW anymore, this is an awesome addition.. though mighty large as well it seems! Nice paint up on it.. really fits the style of it!

@MRLee, I hear you about SW. Heck, even Studio McVey is not putting a lot of effort into supporting the game.

The three things I like most about SW are:
1) the Tactics mechanic
2) the reflex mode mechanics (powerful, but more limited than ARO in Infinity)
3) nano-virus infection and evolution.

I would run Infinity, but the game (which I enjoy and have started playing) does not suit the beer and pretzels, "hey, maybe 2 or 4 or 8 guys want to play" nature of our Thursday night gatherings. I am open to other suggestions for sci-fi skirmish rules!

My comments in my previous response are win respect to SW as a game. The thing that got me to commit time and effort to this project are the beautifully sculpted figures!

The Vanguard, sculpted by Kev White, are amazing. They're also useful as generic, medium and light armoured sci fi troops. The Strain are suitable disgusting, especially the Revenants. Very Resident Evil to me.