Last night I hosted another scenario in my ongoing Sedition Wars Outbreak Campaign; Scenario 3, Terminal Station. This was also the debut of the maglev train I have previously described.


Vanguard Mission
Objective: Live long enough to get personnel on the incoming train

Strain Mission
Objective: Prevent the Vanguard from escaping on the Train. The Strain win if:

Conscripts Frederick and Kevin played the Strain. They set up 16 Revenants, 2 Stalkers, and 2 Quasimodos adjacent to 4 Strain strategic points on the table. Below, looking east, several corpse counters can also be seen, casualties of previous fighting against the Strain, and potential new recruits as re-animated Revenants. 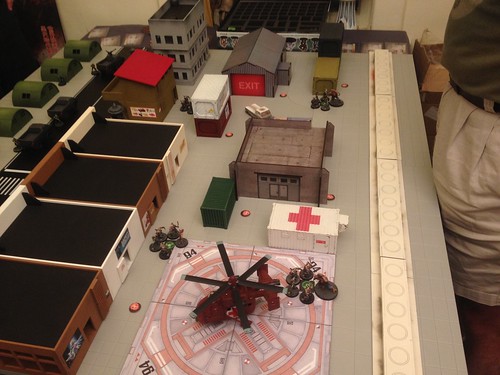 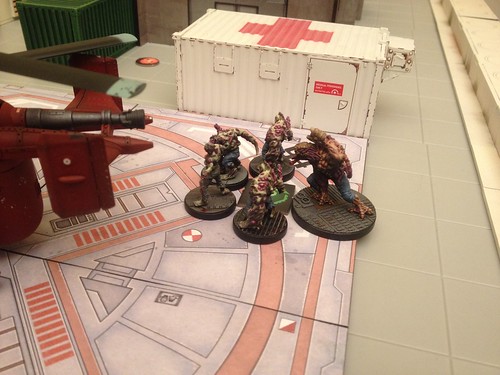 Duncan and Malcolm played the on-table Vanguard, 6 Samaritans led by a Grenadier. I allowed them to set up as far as the north side of the road. 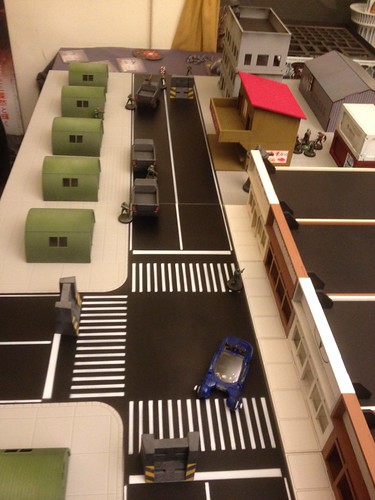 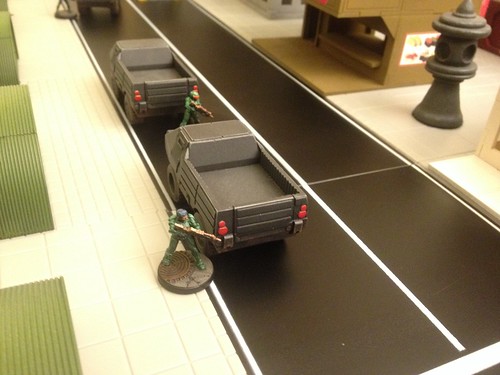 The Vanguard were first out of the gate, wounding or setting on fire some Strain using the indirect-firing grenade launcher, and wounding another Revenant with laser fire. 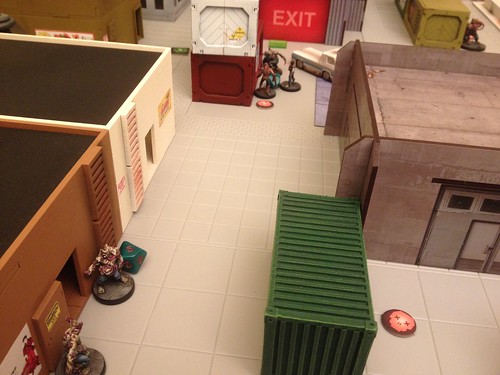 The Vanguard made a cautious advance, mostly on the western side of the table, with a couple providing cover by the strip mall to the east. 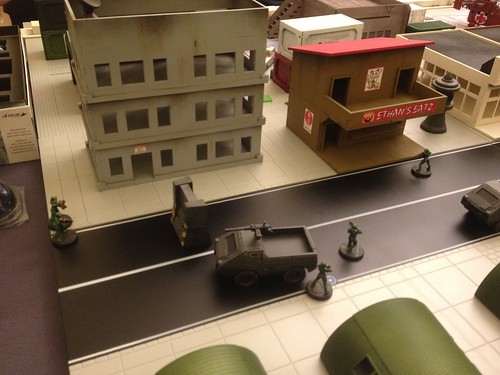 The Strain moved morth and hunkered down behind cargo containers and the bunker; the nano-virus clouds seen below were Revenant casualties of incendiary grenades and lasers. 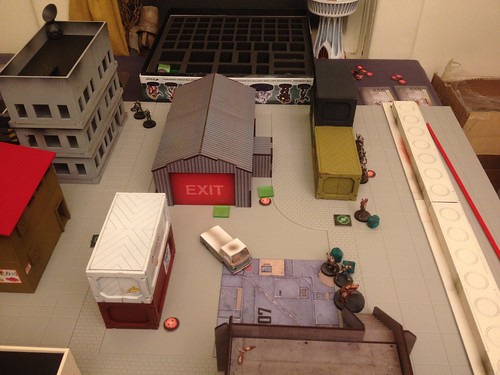 Frederick and Kevin cheerfully contemplate the rising casualty count of the Strain. With the necrocysts and corpses on the table, they could always create more! 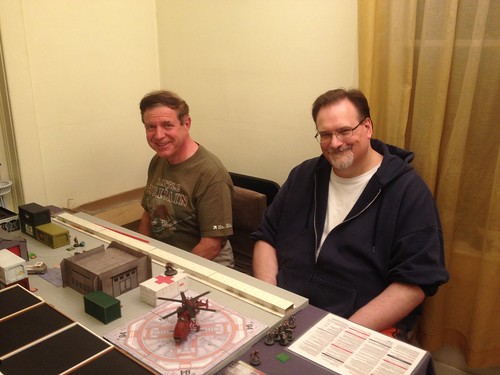 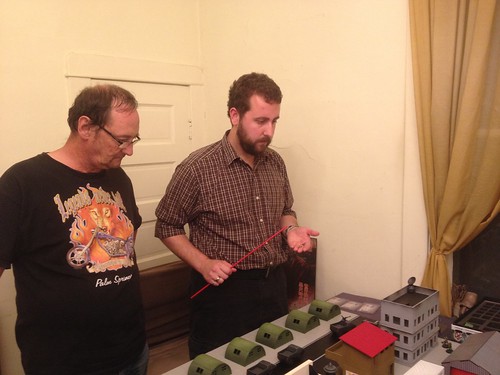 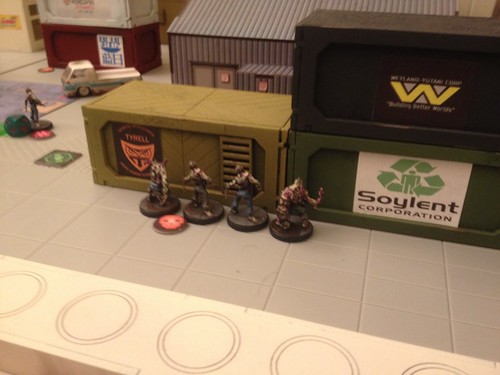 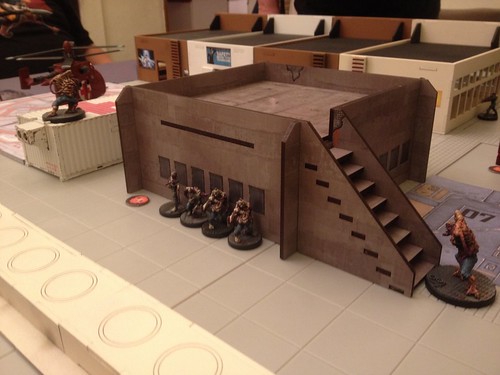 One of the Quasimodos adopted a protected firing position on top of the bunker, allowing him to shoot and melt away a Vanguard trooper! 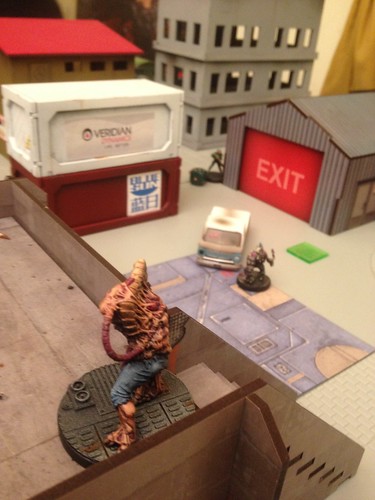 Another trooper bravely drew the Quasimodo's fire; this allowed her comrades to step forward and gun the Strain monster down! The unfortunate Vanguard succumbed to the corrosive acid of the Quasimodo's weapon. 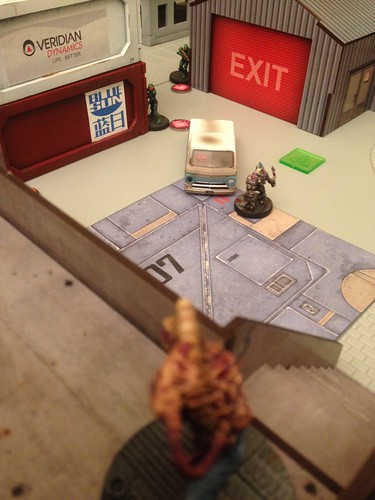 The other Quasimodo was in a good firing position, and shot  another hapless Samaritan; of 4 eventual Samaritan casualties, not one armor save was made against the corrosive effect of the Strain weaponry. 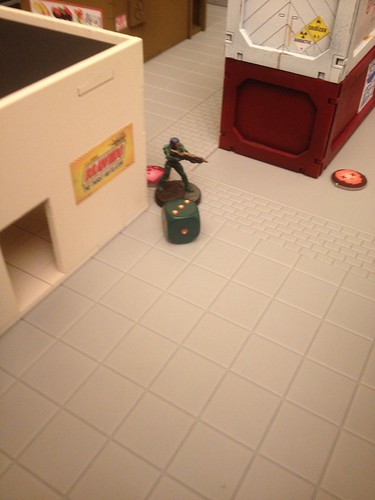 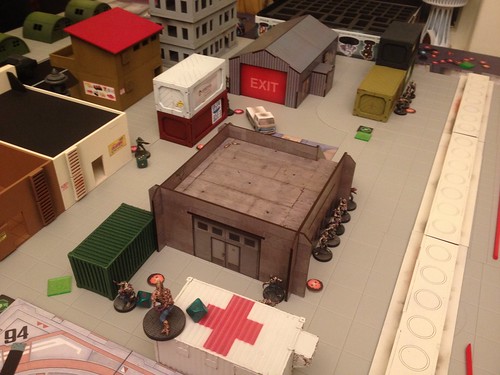 When the train arrived at the end of turn 4, the Vanguard players placed Operator Akosha Nama (run by Dallas) on a car of their choice. Akosha activated immediately, and was part of the Vanguard force from that point on. 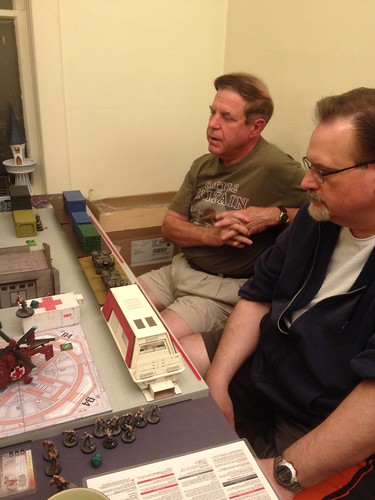 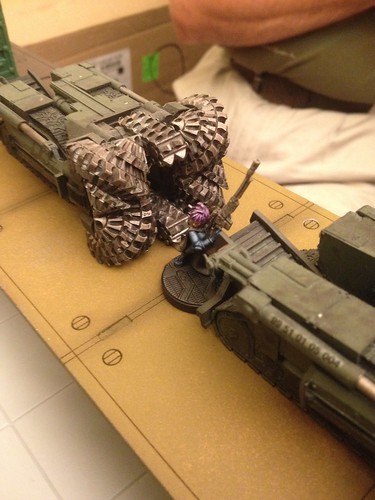 The surviving Vanguard Samaritans try and make up for lost time and advance on the train. 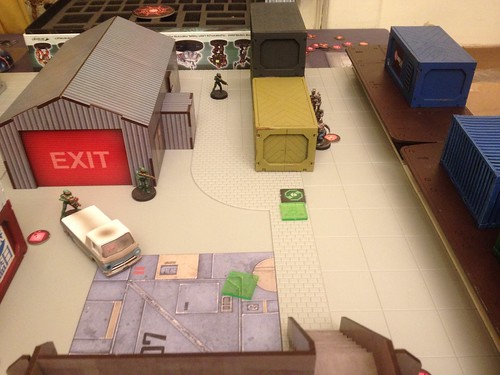 Two groups of Strain manage to get on the train, with only one casualty falling to Akosha's sniper rifle. 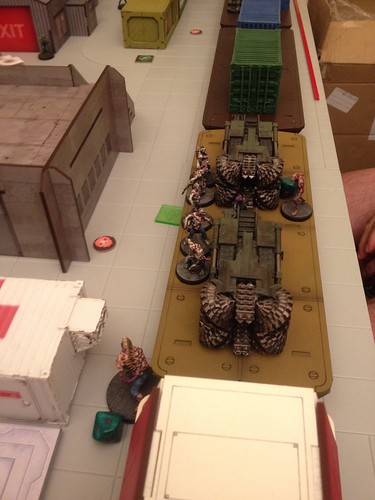 Too far to board the train, and resigned to trying to cause Strain casualties, the last Samaritans concentrate their fire on the group on the westernmost flatbed car, killing two and wounding one more (who was also set on fire). 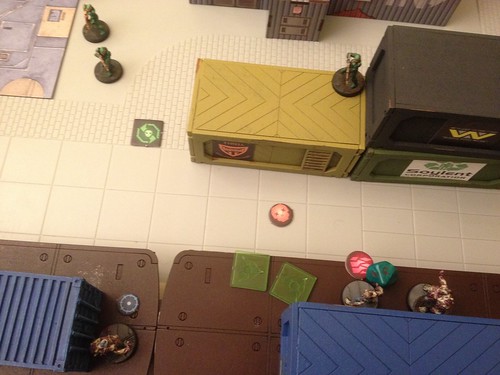 Dallas rolls hot, having Akosha kill a Stalker standing right behind her. 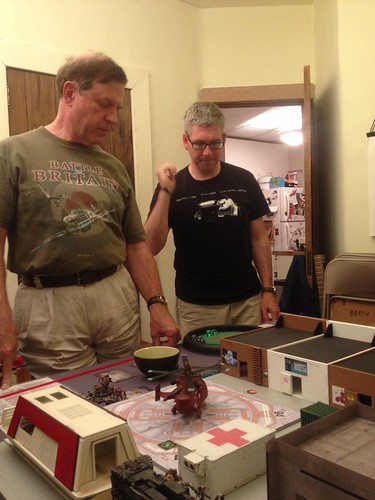 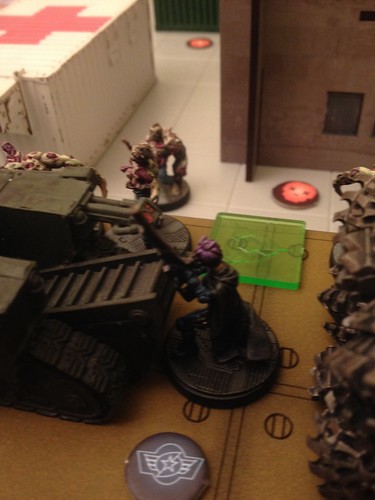 ...or wounded any Strain who got in her sights, until, bleeding out... 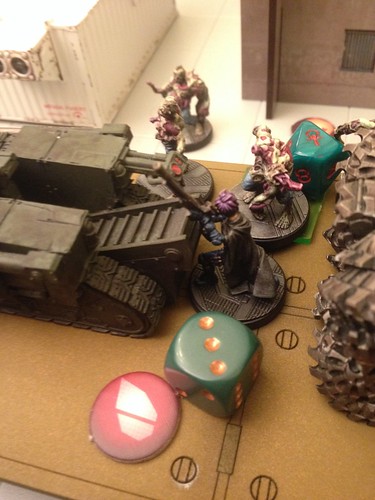 ...she finally succumbed to overwhelming numbers. 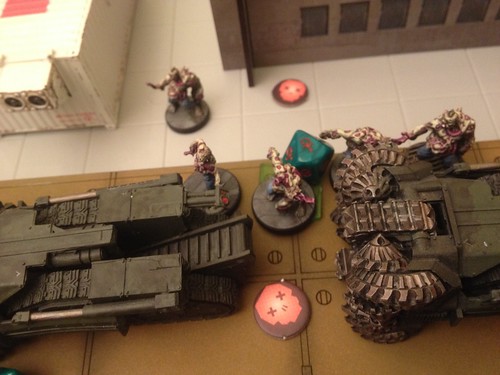 Adding insult to injury, the nano-virus left by a couple of Strain casualties managed to infect one of the surviving Samaritans. 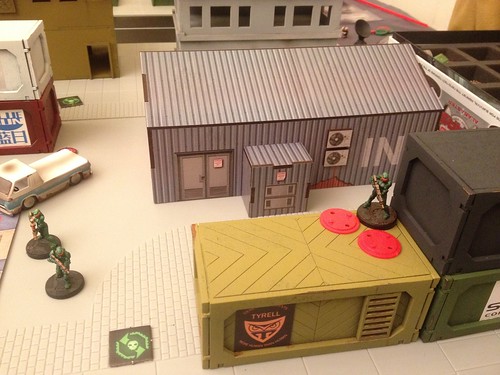 The game was a tense affair. Despite being defeated, the Vanguard gave a good account of themselves. They killed 15 Strain, and wounded another 3 or 4 of the 8 Strain who managed to get aboard the train.

Here is a prevue for the next scenario, entitled, Ticket to Die, or, as Kevin suggested, Strain on a Train:


From the rear of the train appeared Specialist Barker Zosa, clanking along in a powered exoskeleton, wielding a charged up pulse cannon (cue Samuel Jackson voice): 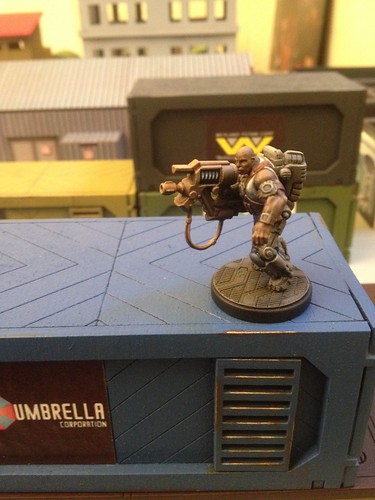 Sweet! Good game, Dave! Looking forward to the next instalment!

Looks great! Sorry I missed it.

Looked awesome Dave, sorry I missed it, was home sick.

Great stuff Dave - that table is something else!