When war was declared with Great Britain in 1812, the American navy was just in its infancy at that time and had nothing comparable to the numerous and large ships of the Royal Navy. However, the Americans built strong frigates crewed by aggressive sailors and commanded by competent captains. In duels, the American frigates would usually win.Well, not this time...

This scenario pitted the USS Constitution against HMS Guerriere in the the famous action off the East coast on 19 August 1812. The rules were a modified version of Trafalgar called Trafalgar Redux and the models were from GHQ. 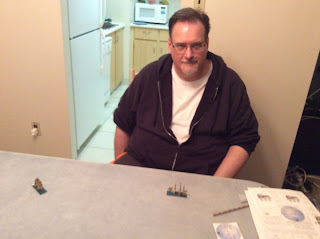 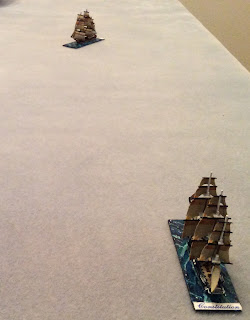 Sent to investigate, the USS Constitution just identified a British intruder in American waters. Get ready for battle! 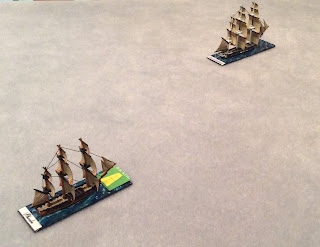 The American crew displayed excellent seamanship, keeping a good distance from the enemy, avoiding being shot by moving out of the British firing arc... 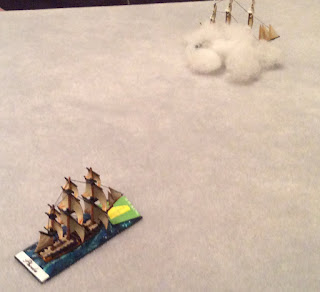 ... while shooting at the masts to slowly, but surely destroy the enemy's sailing capacity. Everything was historically correct so far. 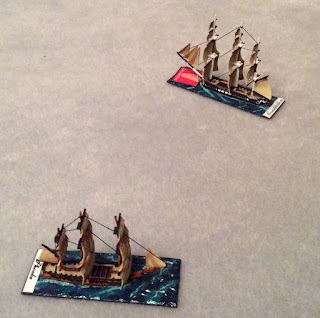 Then, a series of unfortunate events happened. The American crew failed a first maneuver test, a tacking maneuver, which meant that the USS Constitution was now stationary in the water and the British had the wind in good position. To understand how humiliating the situation was, a comparison is necessary. It's like, for a WW1 soldier, to fall head first into the barbed wires he was about to jump, with the butt sticking out in  the air. Another test for being taken aback resulted in heavy damage to the fore mast and severe casualties among the crew. The British frigate took this opportunity to do a stern rake which resulted in ruinous damage to the hull. 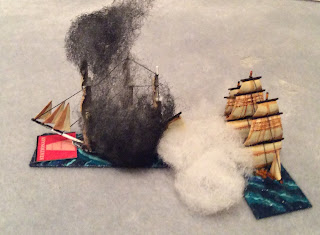 Stunned by how ridiculous the situation was, the American crew probably panicked because, in the next two turns, two more maneuver tests, just to turn the ship back into the wind, also failed. The American butt was still sticking out in the air and the British frigate, after an impeccable tack maneuver, came back for more spanking, right into the stern again. Ouch! Ouch! Ouch! This time, the USS Constitution took two critical hits, one resulting into a blaze which reached the reserve of black powder, which exploded, virtually wiping out the crew. The ship was still afloat, but the crew had had enough and the captain had to strike colours.

The rules work quite well for one on one battles, but I think I would like to give captains maybe one or two re-rolls per game to alleviate series of bad rolls.

Thanks Kevin for coming and trying this scenario. The outcome was not historical at all, but it was interesting and funny.

Email ThisBlogThis!Share to TwitterShare to FacebookShare to Pinterest
Labels: 1/1200, naval, Trafalgar, War of 1812

Thanks again for a great game, Sylvain! In this case, I'm OK that it wasn't "historically accurate." ;-)

Looks fun! I'm just getting into nappy navals but teeny tiny ships. I have a suspicion that there are a lot half built langton models in lofts around the world, these GHQ ships look good though. Best wishes, JeremyJ