Yesterday, Dave and Byron came to my suite for a game pitting British against French ships of the line. The battle of San Domingo was the last fleet battle of the Napoleonic wars to be fought in open waters. Of notice, H.M.S. Canopus was commanded by captain Francis Austen, brother of Jane Austen. One of the most dramatic event of the battle happened when the Northumberland moved between the Impérial and the Superb to protect the flagship. Some shots from the giant French ship went right through the Northumberland and into the Superb. But, of course, wargaming was to redefine history.

At the beginning of this fleet engagement, British and French ships had to be set at least 15cm apart (measured from base to base, not main mast to main mast) in their respective deployment zones, to reflect the scattered aspect of the fleets too rapidly engaged in battle. This included ships from the Louis squadron entering on the map, that will enter the board with a die roll equal to or lower than the current turn number. This made it very difficult to form battle lines.

The rules used were a simplified version of "Trafalgar" that I call "Trafalgar Redux". It speeds up the game considerably by halving the number of dice to be rolled. 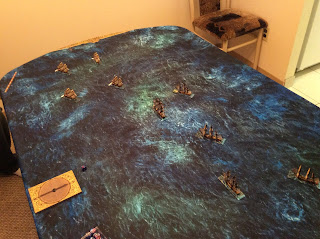 The British squadron commanded by rear admiral Byron Duckworth, recognizable with the white name tags at the stern, duly proceeded to intercept the  French ships of Dave Leissègues, with blue name tags.

As I forgot my sea board at home, Byron was kind enough to bring his own sea mat from "Dreadfleet". Oddly enough, the mat and the ship bases matched perfectly. 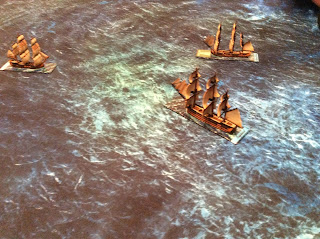 The Agamemnon, a 64 gun third rate, the smallest ship on the board, sails toward the Impérial, the largest ship, with 120 guns. Is this wise? 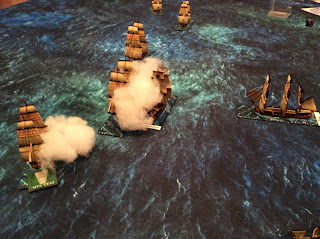 BOOM! BOOM! After the smoke dispersed, it appeared that the Agamemnon lost two masts while the Impérial was still in good order. Both sides were mostly aiming at the masts at this point of the game, trying to reduce the speed of the opponent's units. 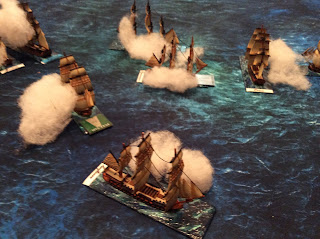 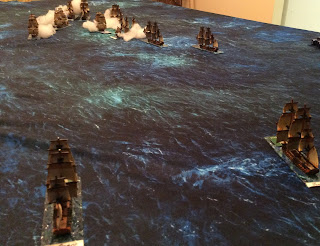 The British were able to get the second squadron on board. Rear Admiral Thomas Louis was eager to join the fight visible in the distance. 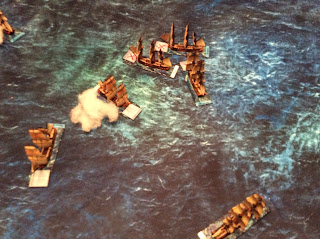 Meanwhile, in the central melee, a few ships collided with each other and became unable to fire. 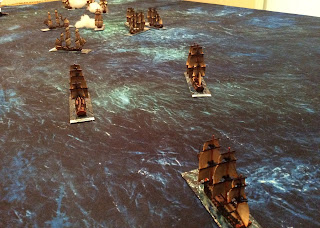 The three ships under the command of Louis, including the 80 gun Canopus, are getting closer and closer. Will this sceal the end of the French attempt to disrupt British commerce with the colonies? What could prevent a British Victory? 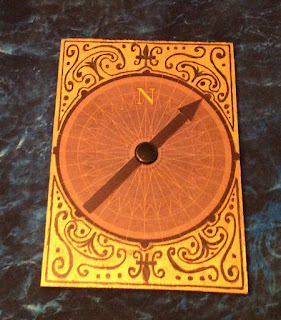 Wait a minute. What is this? A wind dial? So the wind changed direction. So what. I beg your pardon? It allowed a French victory? How is that even possible?

Because of the way the ships were positioned, after the wind changed direction, it became impossible for the British vessels still able to sail to catch three of the escaping French ships, including the giant Impérial. This was enough for a French marginal victory. This kind of event could only happen during the age of sail. 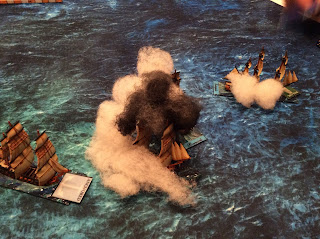 Here are a few images of the last turn of the battle. A British ship caught fire during an exchange of volley causing the reserve of black powder to explode. The ship survived though. 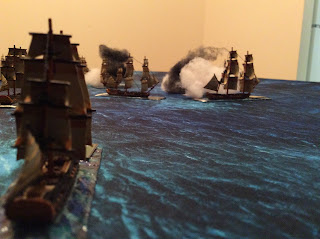 Louis was just about to join battle. One of the French ships, invisible because she is completely wrapped in smoke, caught fire during an exchange of cannon balls, stroke her colours down as a result, then blew up because of an explosion. 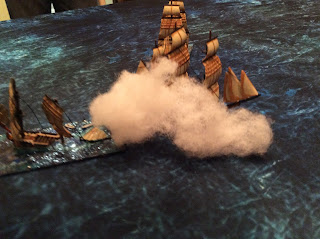 On her way to the edge of the table, after an incredibly graceful tack manoeuver, the Impérial sunk a British ship trying to block her way. French sailors can cause surprises sometimes. 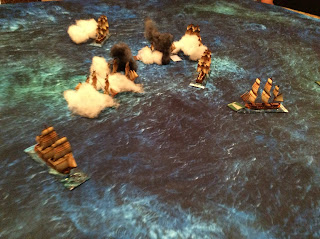 The action in the middle, on the last turn played. The black smoke shows were are located the two ships on fire, that eventually exploded without sinking. So the final result was: 3 French ships escaped, 2 were captured, 1 British ship was sunk and 2 were badly damage. The destruction and carnage felt very satisfying to the host. 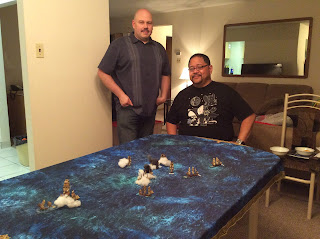 Byron and Dave, discussing the outcome of the battle after it was decided to end the game when the result became obvious. The mat really made the whole experience look good. I'll definitely need to get one. Again, thanks Byron and Dave for playing this scenario.

Sylvain, thanks again for hosting a fun game! That "incredibly graceful" tack maneuver was born of desperation as the wind changed, LOL!

Sylvan
Great to see that you hit your toys in table.
Cheers, PD

Great looking game; I like that terrain mat too!

It's great you got your lovely ships out for another scrap. As we've already done Trafalgar (which was a bit mental) we should tee up the Glorious 1st of June for our next outing.