Codex: Eldar was released at the beginning of June. Three months in, I have been able to absorb the nrew rules, and get some games in, just in time for the upcoming 40K Beer League, and the 2013-14 tournament season.

The dex is pretty balanced. There's a reason to field almost every unit in the army. Wave Serpents are now even more reliable, hard-hitting tanks. As such, Mechdar is still kind of a default way to run an Eldar list. However, bike lists and even all-infantry lists are again viable. The Warlock and Spiritseer Runes of Battle psychic powers are interesting, each one basically two powers, used as either blessings or maledictions. The new Bladestorm rules make basic Dire Avengers and Guardians truly dangerous to anything living. Battle Focus is a funky power granting most of the Eldar infantry the ability to Run before or after they shoot, increasing their range, or allowing them to fade away behind cover.

One notable exception to all the goodness are the Howling Banshees. With the new rules, against enemies in cover they now strike slower in close combat than Guardians. What the heck? This could be fixed by a single errata granting them Assault Grenades.

This year the 24 players have been divided into four factions: Imperial Space Marines, Chaos Space Marines, Craftworld Eldar, and evil Xenos (Tyranids and Orks). It's an interesting mix of forces. Again, most games are 1,000-point affairs, making for short, decisive games. Another feature this year is that each player must have a "core", an HQ and either Troops or Elites totaling between 300 and 500 points. This core never changes from game to game, but rather is added to to create a list for each scenario played.

I have chosen as my core a Spiritseer and a squad of Wraithguard mounted in a Wave Serpent. The Spiritseer is an effective, cheap HQ, who comes already equipped with psychic powers, weapons, and wargear for her 70 point cost. The new iteration of the Wraithguard come with S10, AP2 guns and grant some needed resilience to the army.

I am thinking of fielding the following as my go-to, 1K-pt force: 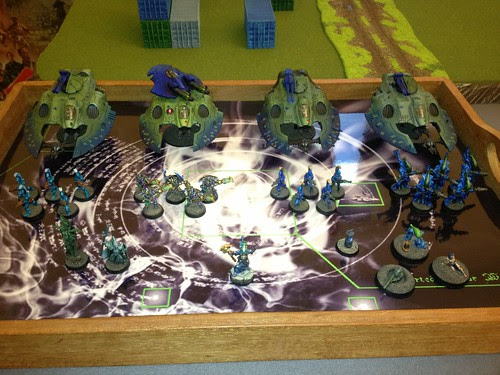 Three scoring units riding in fast transports; the Holo-fields are a no-brainer, granting an extra +1 to cover saves, including Jink saves. Wraithguard for their effective guns and Toughness 6. Avengers because I like them. Warp Spiders are even faster than before, and their guns hit at S6 or S7, depending upon the target's Initiative. The Night Spinner has been changed (most notably losing Twin-linked), but its large blast marker web hits at S7, or S8 against low-initiative models or vehicles. The CTM allows devious ploys, like moving on from reserve 12", moving flat out another 18", and still being able to drop a torrent S8 flamer template up to 12" away; you can reach pretty much right across a 48" table...

This past week I used the above-noted list in practice for the Beer League, playing a fun, furious game against Mario's Tyranids.

IIRC, he had with him:
We played The Relic scenario, with Vanguard Strike deployment. Mario chose the far northwest corner, hiding behind the chemical plant. I won the roll of initiative, choosing to go second.

The bottom picture is taken from behind the eastern table edge. 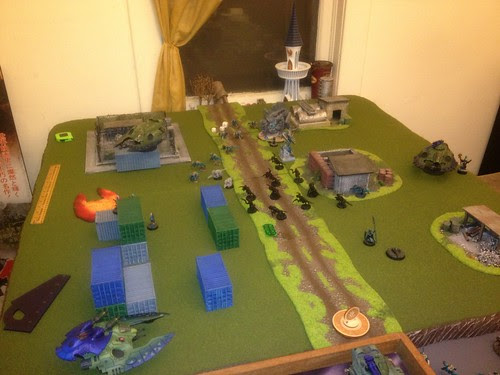 First turn, the Eldar managed to erase a small Termagant brood, scoring First Blood. Mario's Tervigons  rolled well early in the game, birthing almost 40 more Termagants before one rolled doubles (losing the ability to give birth), and the other lost to concentrated |Eldar fire. Both sides took heavy casualties into the mid-game. The Wraithguard got caught in close combat, but managed to survive 3 turns before finally falling. The Flyrant nailed an Avenger squad, then got caught in the open, and was gunned down by the remaining Avengers!

The sole remaining Tervigon had seized the relic, the object of the scenario, gaining 3 VPs. However, the Eldar had scored First Blood and Slay the Warlord. in the sixth (and final) turn, the Spiritseer managed to gain the enemy deployment zone, scoring Linebreaker and tying the game! 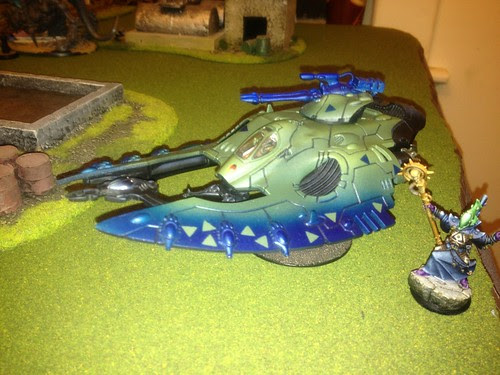 Coming in October, Mechani-Kon requires 1500-point lists. The following picture shows one possible iteration of such a force. 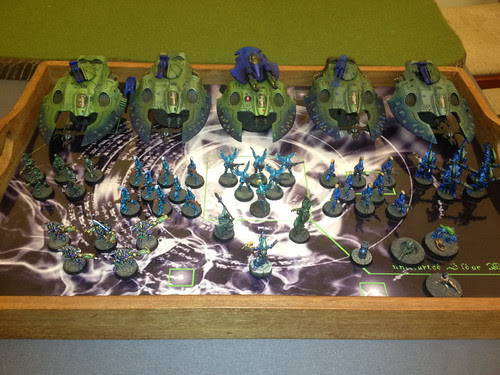 It takes the above-noted 1000-pt list, upgrades or enlarges the Spider and Avenger squads, and adds both a mounted squad of Fire Dragons, and a squad of Swooping Hawks led by an Exarch. With the new codex I am able to field units that have been sitting on the shelf for years. The Hawks are very fast, can Deep Strike without error, drop grenades that ignore cover, and can fly off the table if in danger.

Another option is to forgo the Dragons and Hawks, and run with mounted Dark Reapers, adding an Eldar-like resin cast Aegis Defense Line from WarGamma (the "Dradelian Noble" Linked Barricades). The added anti-aircraft punch of a Quad-gun would be most useful.

I remember having a great time when my wife and I attended the Las Vegas North American 40K Grand Tournament, back in 2011. Sadly, GW no longer puts on tournaments for their own games

A bunch of gamers in the U.S. have organized a brand new event for 2014, the Las Vegas Open, "The best three days in gaming that you won’t remember!"

For my fellow Beer League alumni, check out the scenarios for the Beerhammer 40K event, here. Cans of beer as game objectives. That you drink. I didn't know I needed this until I read about it.

Armies for the Championship and the Beerhammer events are 1750 points. Larger than we're used to here, but not so large as to break the game, like the 2,500 point 'Ard Boyz lists.

If Jen and I do go, I am thinking of a themed Swordwind list, led by the Phoenix Lord, Maugen Ra:
Total = 1747 points

Mauegn Ra would be embarked on a tank with the Dark Reapers. Being Slow and Purposeful, the Reapers  could dismount behind the Defense Line when required and still fire. The Phoenix Lord could man the Quad-gun (with his powers, making it a Twin-lined, 5-shot weapon), and also tank wounds meant for the rest of the squad. Maugen Ra is also very good in close combat, adding a bit of counter-charge capability to the list.

At the moment, I have no idea whether I can make the event. However, it sounds like a lot of fun.

I managed to finish my Spiritseer model just in time for the start of Beer League. I am currently working on Maugen Ra, and the Defense Line.
Posted by DaveV at 4:40 PM