Wings of Glory - The Hun Attack!

Last Thursday night's game was the latest in our long-running Wings of Glory/Wings of War campaign. The game was still set in 1916, pitting men and machines of the French Army Air Service (Aéronautique Militaire) against those of the Imperial German Flying Corps (Die Fliegertruppen des deutschen Kaiserreiches).

From the last game, the German's had their choice of three scenarios for this mission. They chose scenario 3a. modified as follows:

Mission 3a: Hold the Line: With key targets and locations located in the last mission, HQ has ordered the air service to clear the skies while the ground troops make an advance on them..

Victory Conditions: Mission Points. At the end of the sortie, the side that has the most victories wins the mission.

Setup: Mission should be played length wise on a 4’x6’ table. The Attackers  have an 18 inch deployment zone and the defenders have a 30 inch deployment zone. This leaves 24 inches of No-man’s Land. Both sides must start the sortie with their planes inside their deployment zones in a loose formation no more than a ruler length between panes..

Below, Conscripts Frederick. Bill and Kevin (not pictured) played Die Fliegertruppen, setting up three Albatross DIIIs in the left (eastern) section of the table. 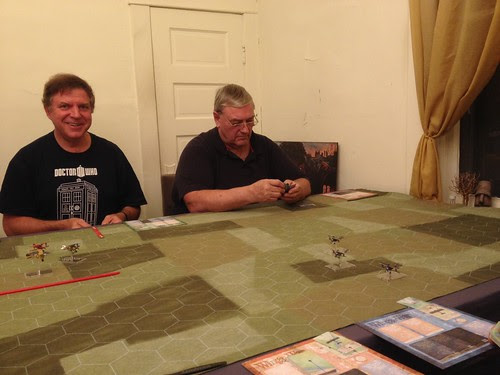 We had an odd number of players, so I stepped out of the campaign organizer role to assist Jim and Byron, flying a trio of Aéronautique Militaire Nieuport 17s. The planes can be seen angling southeast towards the three German machines... 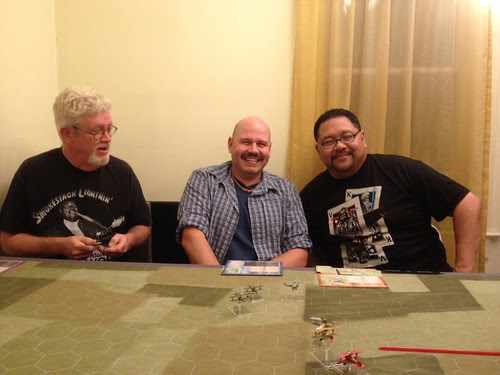 Up until that point I thought that this was going to be a canny game of maneuver. However, the opposing forces ended up flying straight at each other in a no-deflection exchange of machine gun fire. 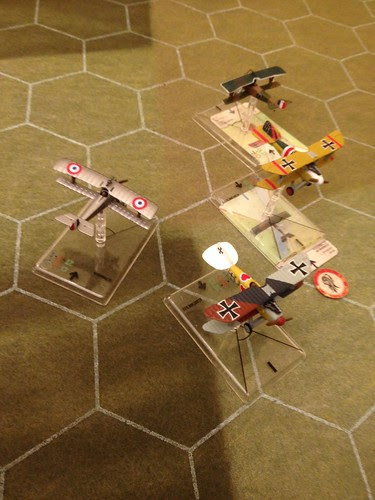 The first two phases after initial contact, my camouflaged Nieuport managed two heavy bursts against a couple of German aircraft. After the game, I found out that these close-range bursts had inflicted like 8 or 9 damage points to each plane!

However, the Germans gave as good as they got, damaging my plane severely. I Immelmanned back and went for Bill, who put in the finishing blow, sending my aircraft down  into No Man's land. 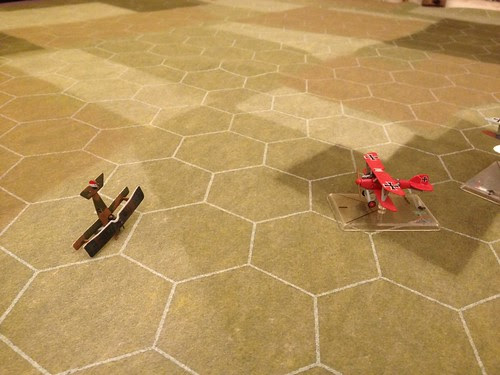 Jim made a wide loop to the south and west. Meanwhile, Byron got caught in a squeeze play between Frederick and Kevin, and was soon shot down. 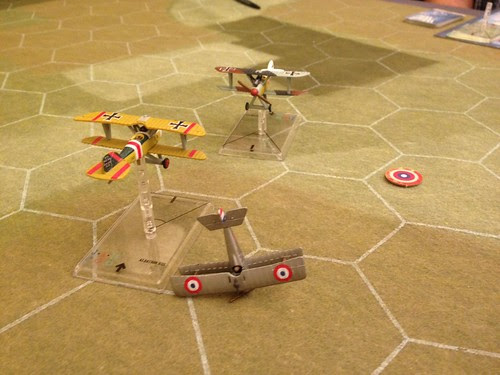 Jim got back into the fight. His rudder got jammed by enemy fire, so he was forced to go head to head against Frederick. They shot each other out of the air - Jim's French plane also fell into the mud of No Man's Land, and Frederick's Albatross disappeared in a  ball of flame! 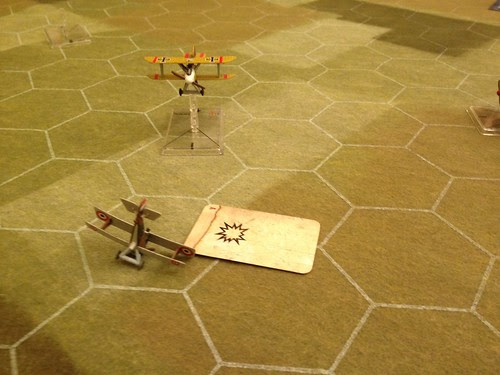 The takeaways from this fight? Maneuver to take shots on enemy planes from their rear; trading head-on shots leads to more pain than it's worth.

All the pilots who got shot down drew cards to see how badly wounded they were. Frederick's pilot, due to the nature of the incident, had a very high chance of dying outright.


If any pilot  manages to reach 5 victories (Frederick's Flight Leader is close with 3 1/2), he will become an Ace, and then be entitled to gain Ace Skills, special skills that functionally break the rules of the game (that is, to ignore some weapon jams, ignore certain damage effects, etc.). Double aces will get to choose another skill, or potentially upgrade an existing skill.

With 15 pilot points, Fredericks' lead pilot is also 5 points away from possibly winning the Knight's Cross.

The Germans currently have the advantage. Can they keep up their momentum?

Dave, I think Jim should get credit for a full kill as he was the only one shooting at my flight leader when he went down (even though you had inflicted 9 damage).

Shouldn't it be the 'Pour le Mérite' (aka the Blue Max) rather than the Knight's Cross?

Wings of War... one of my favourite games!

Great looking photos. I've been tempted by this game for ages. I can feel my willpower weakening as I type...

Frederick RE: Jim: I take your point. I have adjusted the scores accordingly.

Lee: It's loads of fun game, for sure. The various WoG starter sets available are a good way to get into the game. 3D prints are also available (e.g. from Shapeways) to model planes not covered by the official rules.