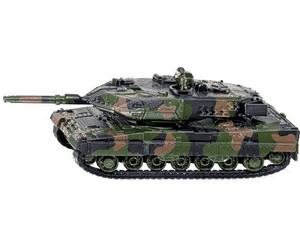 So, every 15mm army needs armour, right? And I was looking for something different (and let's face it, cheap) for my new 15mm NAC force. The infantry already roll around in modern Fuchs APCs made by a company called Siku, who happen to make a 1/100 die cast model of the Leopard 2. Can you feel the stars aligning here? I went on eBay and found the best deal on the Siku Leopards (turned out to be from a German seller on ebay.de, 8 euro each plus 9 more for postage) and a couple weeks later, they arrive. 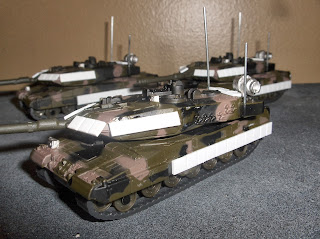 ...and after judicious application of wire antennae, plasticard bits and random metal junk, here they are. 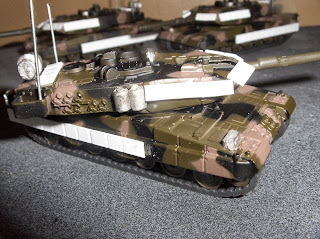 The canisters on the turret side and the other metal bits are from Rebel Miniatures. 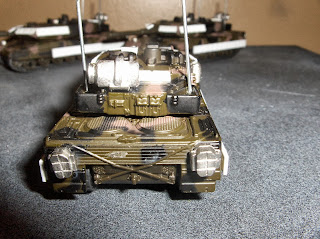 The greeblies on the hull rear match those on the APCs. Anti-personnel mines maybe? 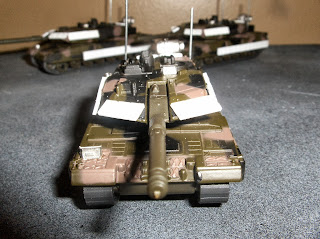 I cut plasticard strips, then scored them with v-shaped cuts. The idea was to suggest some futuristic kind of explosive reactive armour or suchlike. Plus it breaks up the recognizable "Leopard" silhouette a bit. 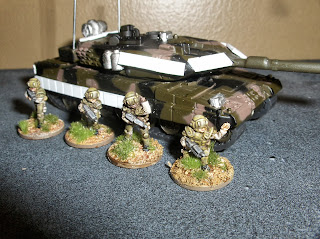 Here it is with some figures. The Leopard model scales out at exactly 1/100 so is at least notionally suitable for the figures. I'll be basing the tanks to match the APCs so the completed model will be a bit taller.

Nice work dude! The Control Battalion T-900s look forward to tangling with them. Or working with them, depending on the nature of the contract involved...

That should actually say Leopard 2A4.
Currently our regiment has some 2A6M's and some 2A4M's. Great site.

Hi anonymous - first off thanks for your service - can I ask what regiment? These tanks will serve in a sci-fi force hence the "futuristic" designation - basically imagining what Leo evolution might be in 50 years' time... with extra greeblies like reactive armor plates etc. Glad you're enjoying the blog!