I'm continuing to clear 15mm WW2 material from the painting pile.  Here are some more 15mm WW2 Soviets I wrapped up over the weekend.  The figures are all from Battlefront. There is a rifle platoon and a bunch of 82mm mortars.


The Infantry platoon is comprised of a command stand, seven rifle stands (four of them with LMGs) and a stand of SMGs.  I don't think I was supposed to end up with a stand of SMGs, and if I had thought this through a little more clearly before gluing things to bases, I believe I could have had eight or even nine rifle stands...anyways...

I think this might represent one platoon for Flames of War, which is not very much, particularly for the Russians.  For Spearhead it would represent the bulk of a rifle battalion (adding a mortar and a HMG to make it a complete battalion).  Again, for the Russians, not very much...but it is starting to add up.  I have a total of 27 rifle/MG stands painted for my WW2 Soviets now - about half of what I would like to have.


There are eight 82mm mortars in the package from Battlefront. It also came with a command stand, but I have so many of those stupid things I didn't bother painting it up.


I think this would represent two mortar platoons in Flames of War - enough to keep some German heads down.  For Spearhead purposes, where each base would represent a platoon, this is a health pile of 82 mortars, probably enough to fill out an entire rifle brigade, which would have 82mm mortars attached to each battalion, with another group of them horded together in some kind of mortar battalion.

I just wish the mortar platoon pack would have come with an observer team...oh well. 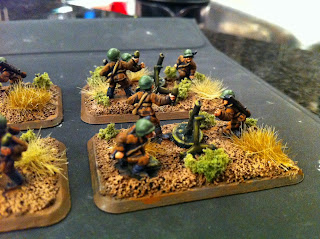 Beautiful work Greg! I like how you 'amped-up' the greens on the Soviets. It really makes them stand out on the bases.

Awesome they look great. The basing is brill.

That is impressive both in numbers and skill

These look awesome. I'm a big fan of the Eastern front, and these are some fine examples of the soviet horde.