The twin suns of Tatooine blazed down from a cloudless sky as Imperial Stormtrooper Detachment AK-567B trudged in a skirmish line across the Jundland Wastes. A huge green Dewback lizard accompanied the detachment, its tail swishing menacingly as its white-armoured rider swayed in the saddle.

The detachment leader's comm unit crackled. "What's the mission, sir?  Is this gonna be a standup fight, or another bughunt?"

Lieutenant Trantor keyed his comm. "Shuddup. Save the volts for your air scrubbers. Just over this rise there's a Jawa sandcrawler. There's been a tip that those droids we're after were there. We're gonna check for the droids then vape the crawler. Make it look like the local Tusken People or Sand Raiders or whatever did it."

The comm crackled again. "But sir - the briefing vox said that Tusken Raiders always travel in single file to hide their numbers - shouldn't we get in a march column?"

Trantor's voice belayed slight irritation. "Sure, spacetard - and Tuskens wear armoured boots like us too, right? Get your blaster ready. Let's make this quick."

Two weeks ago we played a Star Wars Miniature Battles game set in the Jundland Wastes of Tatooine. Stormtroopers attack a Jawa sandcrawler but perhaps the Jawas have some friends nearby to help them out...? 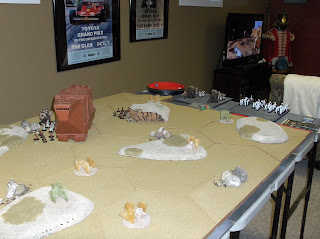 The opposing forces were drawn up - the Jawas and their sometime-allies a tribe of Tusken Raiders, versus a detachment of Imperial Stormtroopers. Points were slightly in favour of the Tatooine natives (about 260 to 230), but I intended to offset this by having all Imperials on the table at the start, while some of the Sand People would enter as reserves. 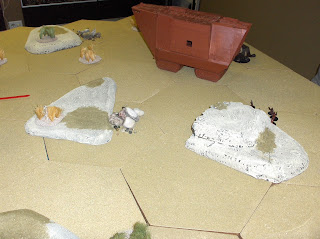 A major impetus for the game was the acquisition of this remarkable Sandcrawler, a product of one of my other hobby obsessions, collecting vintage Star Wars toys. The "Remote Controlled Jawa Sandcrawler" was one of the most expensive and therefore rarest of the toy vehicles issued by Kenner in the Star Wars release of 1978-9, and I managed to pick up a loose example for my collection. Although somewhat underscale for the 3 3/4" Kenner action figure range, it's perfect with 28mm Star Wars Miniature Battles figures! 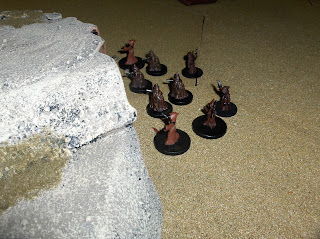 One group of Jawas started deployed behind a small rise. The other was behind the 'crawler, hobnobbing with the Tuskens. There were two more groups of Sand People nearby - both with Banthas - and these would come on as reserves as the fighting ramped up. 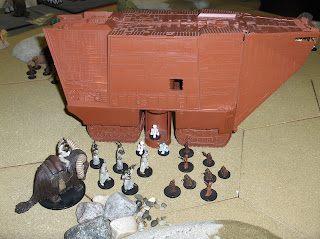 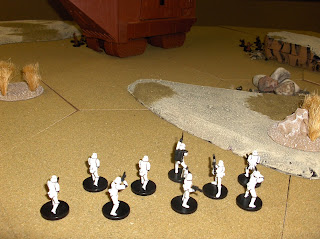 The Imperials came on in four squads - their objective: wipe out the Tatooine natives, search and then destroy their vehicle. 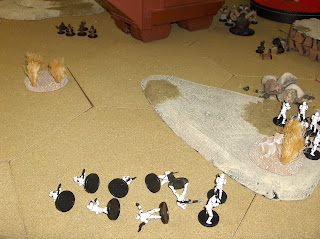 The Jawas turned out to be tough li'l buggers - their mass ion blaster fire decimated the Stormtroopers at first. 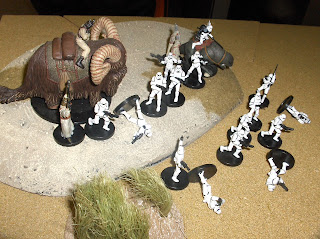 The Sand People, on the other hand, were pretty weaksauce. Not many of them had guns, and therefore had to get up close and personal with the invaders. Unfortunately, the Blastech E-11 turned out to be a much handier tool than the Gaderfii stick ;-) 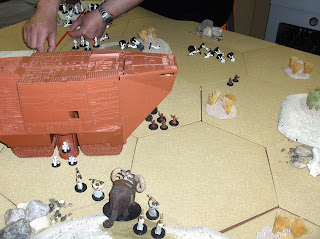 Jawas swung around the flank and put down some effective harassing fire on the Imperials. 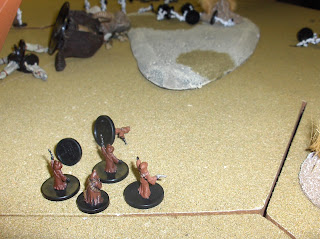 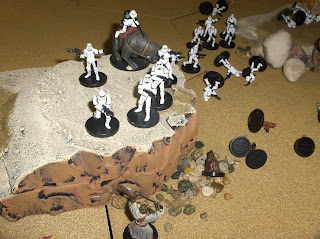 The Imperial gunline advanced inexorably, mowing down all who resisted. 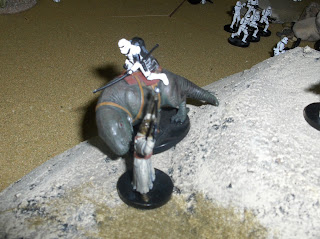 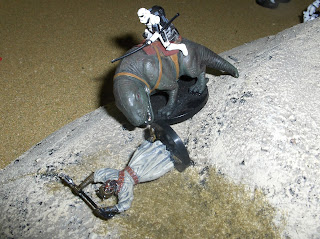 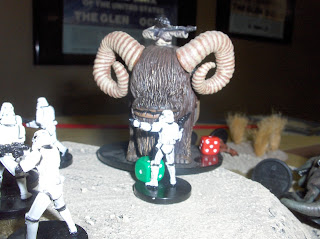 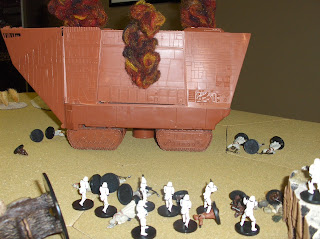 Eventually, all resistance was snuffed out and the Stormtroopers destroyed the Sandcrawler. Didn't find the droids they were looking for though. There's a small moisture farm just past some nearby dunes to check out next.

It was pretty fun game but once again, pointed up the failings of the SWMB points structure. Even with a ~30 point advantage the Tatooine natives were quite overmatched - Stormtroopers may be a bit too cheap for their considerable abilities. A neat scenario which we may play again sometime!
Posted by Dallas at 10:46 PM

Very cool looking game, I will have to do this game in the future.

I assume you are not going to give that sandcrawler the paint job it is begging for? ;)

The only good Jawa is a DEAD Jawa! That's a great battle report.