While waiting for the latest round of stuff for my Golan Heights Project to dry etc. I had some fun today painting up some pint sized tanks - 3mm/1-600 scale tanks from Oddzial Osmy. These are available through the excellent folks at Pico Armor.  The quality of these sculpts - particularly considering the insanely small scale - is incredible.   Often derided by the pointy-headed TMP denizens with lines like "oh, I guess you would need counters for the infantry, or to even see what it is hah hah", the amount of detail that Oddzial Osmy manages to cram on these tiny models speaks to incredible sculpting talent.

I have some modern Canadians and Russians in this scale, based in groups on bases.  What is so neat about this scale is that it offers the nutty gamer (like me) the chance to try and show "what it really looks like" on the table - a small table.  My T-72 battalion - it really is (well, it is very close) a battalion of tanks - 33 of them, spread across on the same number of bases I would use to represent a battalion in Spearhead with 6mm/1-285 models in Spearhead.  With the 3mm scale you can game high level divisional breakthroughs, and simulate games where the units cover a lot of territory (or at least try to).  It's fun.
And yet.  And yet.  On Curt's Analogue Hobbies post about a 1:1 Civil War unit (check it out here), he mentions the curiosity of wanting to see an entire Civil War regiment lined up.  My hobby mind is tormented the same way about armoured units.  I sort of have that with my Canadians and Russians, but   even with the small scale, they are still crammed on the bases.  So despite the tiny size of the models, the tanks are still all packed together, creating an axle to axle look that I strive to avoid, even as I play games stacked with armour in all sorts of scales - yes, I am the problem. 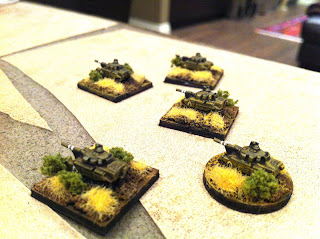 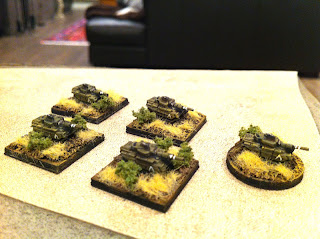 Inspired by that 1:1 Civil War post from Curt, I wondered what individually based Ozzdial Osmy tanks might look like?  If they were individually based, the tanks could spread out where it made sense, but with the small vehicles, you could have a lot of them on a normal-sized game table.  But what would it look like?
In my research for the Golan Heights Project, I have found the battles of the 1973 Yom Kippur War lend themselves well to this experiment.  They were primarily fought by tank units, and featured LOTS of tanks.  While I certainly will paint a pile of them for 15mm scale (after all, I'm nuts and I love painting tanks), the 3mm/1-600 scale would allow for an average table to fill with tanks and still not look too bad in terms of the axle-to-axle effect. 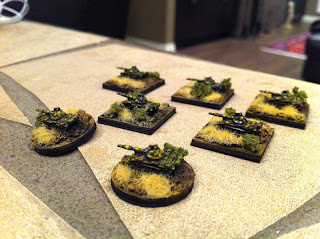 Pico Armor products are very reasonably priced, so the experiment is one of minimal expense.  I based some tanks on 20mm square 1.5mm-thick wood bases from Litko, using 30mm round bases to represent the tanks of company and battalion commanders.

I did a couple of experimental WW2 tanks as well - a Tiger II (yes LOL) and some T-34 variants. 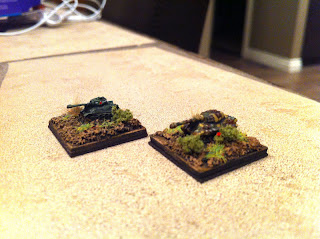 I was happy with the results - this was a fun diversion. These tanks paint up really, really fast. I will add a few more during my next pause, and then at some point I might try and rack up a "Valley of Tears" type game for the guys. And see what I can come up with for basing infantry - not to worry, it won't be 1-to-1...

Great work but especially the bases as they bring them alive as well!