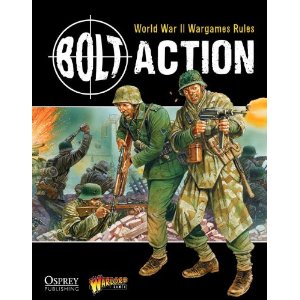 For our Wednesday game last week we played the new Bolt Action 28mm WWII rules from Warlord Games. Since I'm planning to run a demo of the rules at an upcoming local show, Warlord kindly sent me an advance copy of the rules in Word format. This version, while final, lacks the flavour text and illustrations that will be in the commercial hardcopy version, so I recommend picking up the book when you can :-)

The Word version was perfectly serviceable for our group's game and I found the rules well-written and sensibly laid out. Concepts are borrowed from other rulesets but we found BA to be quite elegant and easy to pick up with a few fresh ideas of its own. Standing on the shoulders of giants, as it were... 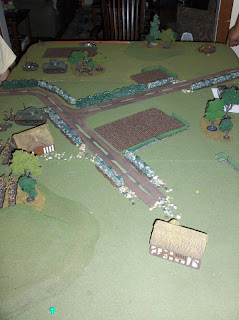 Conscripts Bill, Frederick, Brian and Dave V. came out for the game. For our battle I laid out a 6'x4' table of typical French countryside. A small cottage and barn, some fields and stone walls and hedges, woods and hills. We were playing a late-war battle between Canadians and Germans, at the 1300 point level. (BA provides a points-based army list document for each of the major combatants of the period - British/Commonwealth, American, Russian and German). The scenario I chose was "Envelopment" - with equal points, the attacker scores VPs for each unit in the defender's deployment zone or exited from the table at the end of the game. The defender scores VPs for destroying attacking units. The Canadians were defending - you can see a Canadian Sherman and Sherman Firefly, along with a Universal carrier, deployed at left above. 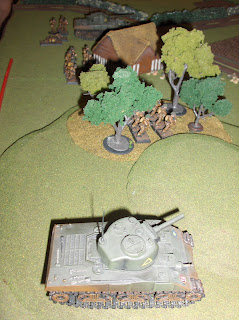 Canadian infantry and a Sherman on the Allied right flank. 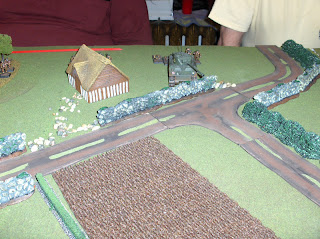 View from the German lines. 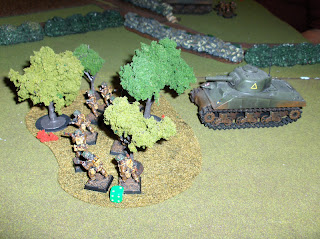 Troops are classified as "Inexperienced", "Regular", or "Veteran", with a corresponding Morale rating of 8, 9 or 10, respectively. "Morale" equates to "leadership" in the Warhammer paradigm, with checks taken on 2d6 and a "pass" being a roll equal to or lower than the Morale value. Each Pin on a unit adds one pip to the roll (making it harder to pass) and the presence of an officer subtracts. At 1300 points, the Canadians deployed an HQ section, three 10-man infantry sections, an MG section with Carrier, a PIAT team, two Shermans and a Sherman Firefly, all Regular. The Germans got three 9-man sections each with a Sdkfz. 251, an HQ group, a Panzerschreck team and a Hetzer, all classed as Veterans. 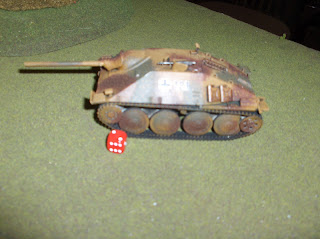 Here's the Hetzer entering play. In BA, play proceeds as a result of a random draw. Each side is assigned a dice colour (in our case red for Germans and green for Canadians) and one die is placed in the cup for each unit on that side. In our game this meant 9 red dice and 10 green ones. A die is drawn at random from the cup and that side activates one unit by placing the die next to it. There are six "orders" or actions that a unit can take - Fire, Advance, Run, Ambush, Rally or Down - and each corresponds to a die face, in that order. In the above picture the Hetzer has been activated with an "Advance" order which means it can move and fire. 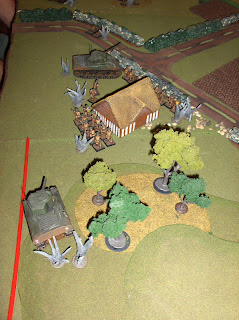 Most of the provided scenarios even out the disparity between attacker and defender with even points by allowing a "preparatory bombardment" that hits every defending unit on the table. The effect is usually to place one or more Pin markers on the unit but sometimes the bombardment results in actual casualties. The Pin markers make it more difficult for units to fulfill their orders - each marker on a unit subtracts one pip from the target Morale roll, and in order to do anything a unit with Pins must first pass this Morale check. If the test is passed one Pin is removed and the unit resolves its action. If it's failed, the unit goes "Down" and takes no further action that turn. 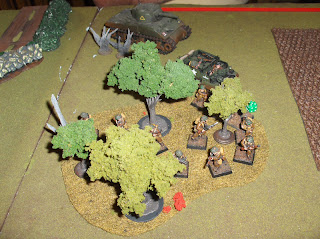 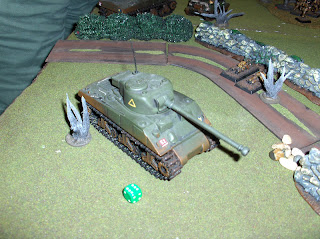 The Firefly failed its Morale check to fire at the approaching Germans and goes Down instead... which for a vehicle means reversing away from the nearest visible enemy. I like this mechanic as it seems realistic... I imagine that the Firefly crew imagined the woods to be crawling with Panzerfaust-toting SS maniacs and decided that discretion was the better part of valour! 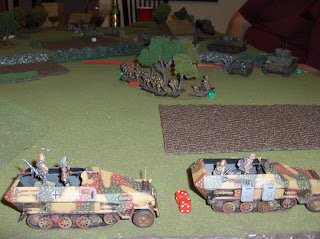 In the meantime, Dave V. raced two of the Hanomags up the flank. The scenario awarded the Germans VPs for exiting the table and after some initial confusion the Germans gunned it... 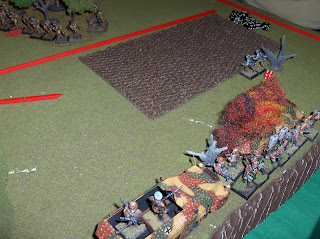 One of the Hanomags is destroyed as the Panzerschreck team at the edge of the field tries to cover the advance. Passengers in destroyed vehicles are not automatically killed, but the consequences of this happening in our game tended to be not very severe. Would like the thoughts of others on that, but my sense is that it would be pretty disconcerting to be riding in a 251 as it is destroyed by AT fire. 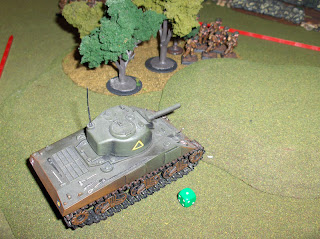 Sherman on "Fire" orders aims at a German Hanomag. Shooting is pretty straightforward in BA - everyone needs a 3+ to hit, modified by range and cover. A damage roll is made for each hit - target number depending on the target. A Regular infantryman is killed on a damage roll of 4+ but it takes a 5+ to kill a Veteran. Armoured vehicles have damage rolls of 7+ and higher - meaning that small arms can never kill an AFV, to do that you need an AT weapon that has a damage roll modifier, sometimes adding 5 or more to your damage roll. A roll equal to the target number is a "glance", a roll exceeding it is a penetrating hit. A roll is made on a results table to determine the damage, and it tends to be deadly... vehicles that are hit and damaged will be on fire or destroyed over half the time. 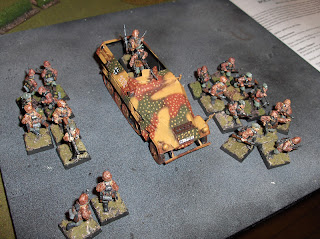 The game itself was not particularly bloody, probably mostly due to the fact that the attackers were well mechanized. Here's what made it off the table for the Germans, giving them a clear victory despite their handicap in armour - one Hetzer vs. the three Shermans. A clear example of how keeping sight of the victory conditions can make up for a seeming disparity in forces.

I quite enjoyed playing with the Bolt Action rules as they are similar enough to our house rules and the Warhammer rules with which we are all familiar, yet they do add some interesting and flavourful new elements (like random activations and the order dice) as well. My only concern with them is that random activation element - for example, WW2 tactics specified a set-piece assault, with elements tasked to soften up a target while others advance by bounds and ultimately assault the suppressed target. This may not really work in BA just because of the random activation. We'll have to play more to determine is this is really a factor in need of addressing - I am planning to commemorate the 70th anniversary of the Dieppe raid this week with a game, and I think we'll try the BA rules again. Stay tuned!
Posted by Dallas at 11:40 AM

Sounds like a decent set of rules. Likewise, my only concern from what I've heard is the random activation mechanic. Worst case scenario, you can just house rule it to alternate activations or alternate turns.

Looking forward to hearing more from you about BA!

These sound pretty basic... which is no bad thing in my book but are the rules worth their price tag?
Also is there a limit as to the number of 'pins' a unit can accumalate?

Steve - there is a limit to the number of Pins a unit can accumulate. Once it receives a number of Pins equal to its Morale rating (8, 9 or 10), the unit is removed from play.

A unit has a Pin placed on it every time it is hit by an enemy unit (but just one Pin per shooting unit no matter how many hits are caused, except in the case of certain heavy weapons that give more than one Pin).

Great stuff Dallas
That German flanking for e seemed to almost fall off the table :-)

Good report/review, Dallas. Looking forward to the next game! (Sorry to have missed THIS one!)

Also, just found this post on the Warlord site regarding morale in Bolt Action:

Thanks for posting this great report/review. I've been kind of on the fence about whether to order it to have a look at... but I think I might just check it out now!

A). Regarding the random activation. Is is simply pick a dice and the color (i.e. a red die for Germans) means that a German unit can activate? Or is their specific dice per color corresponding to a partircular unit (mean that your Panzergrenadiers might just run in the open before a mortar team has had a chance to pin down a unit that might fire upon them)?

B). Regarding the order options and the dice. Once a unit has activated are orders issued and the die used to denote which order the player has chosen? Or is it some kind of completely random order system?

Have some Warlord 28mm stuff and my friend Sean and I are considering trying Bolt Action. We also both have Rules of Engagement (haven't played yet). Thanks in advance!

Hi Stephen. Pulling a red die means ANY German unit can activate, it's the German player's choice which one. The player picks which "order" the unit receives (fire, advance, run, ambush, rally, down). The die is left beside the unit showing what order has been chosen for the turn. Simple and elegant!