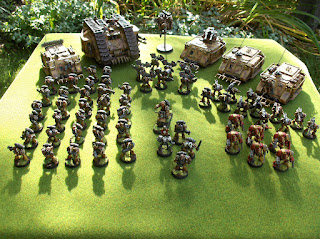 As threatened, yesterday I took the lads out into the yard for an impromptu photo shoot of my entire RT Howling Griffons Space Marine army. Not quite to the level of Fred Reed yet, but unlike Fred's, mine are all metal ;-) 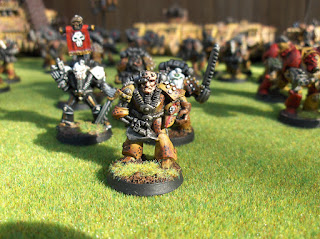 Here's the commander. Haven't gooten a name for him yet. I do have an unpainted Perry twins' Imperial Commander diorama that I'm planning to paint as Orlando Furioso, Chapter Master. In camouflage of course!! Behind him stand the Chaplain, Apothecary, and a Space Marine Tech Support trooper. 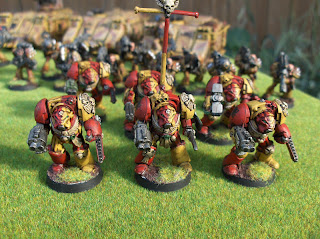 Here's the Terminator squad, with Devastators behind. 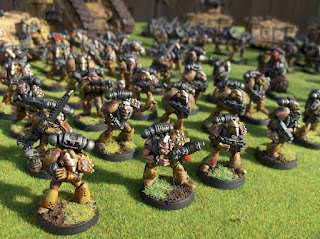 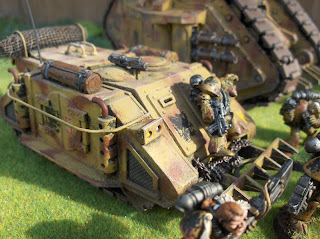 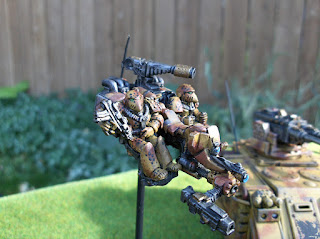 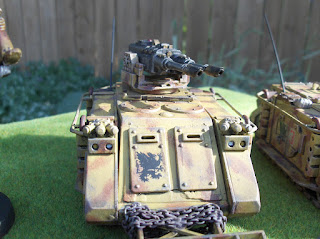 The amazing changing AFV... one minute it's a Rhino, the next minute a Predator (see below)... right now it's a Razorback with twin lascannons. Resin turret is from Puppets War in Poland. Great stuff. 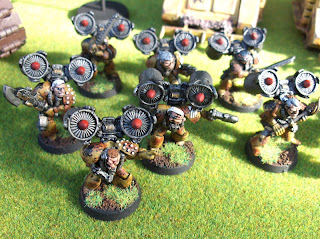 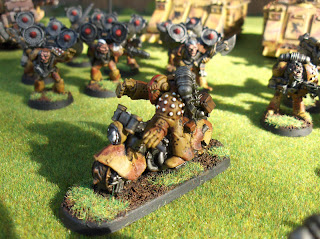 Commander on bike, with power fist of course! 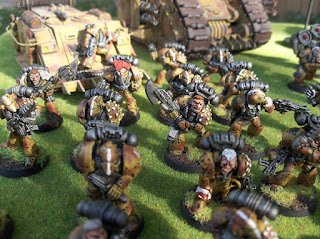 More of the Brother marines. 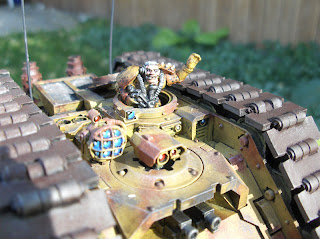 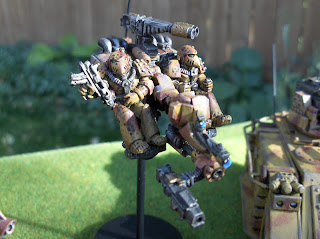 Landspeeder again. I love this model. So... Rogue Trader-y. 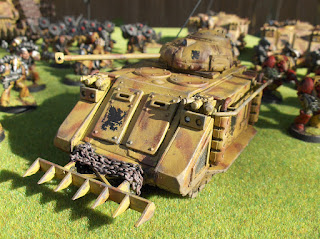 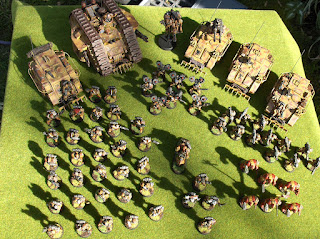 Overhead shot of the lads. Can hardly wait to get them all out for a 6th Edition game. Must be 1500 points here easy - on a point-per-weight basis anyway!! Still a bit to add though - I'm thinking Dreadnought(s). Modern style? FW Contemptor? Mr. Peanut? Watch for a new poll question!
Posted by Dallas at 10:13 AM

Great looking army. I have a Space Wolf army that I haven't used in about 15 years. I used to enjoy the miniature battles that we generated using the original Rogue Trader rules.

Thanks Robert! You oughta get those Space Wolves out on the table again!

Ah, the glory days, when Space Marines had expressions on their faces. Fantastic army you've got there!

Wow!! They are breathtaking all together in the sunlight. Congratulations on an amazing army. And Mr. Peanut! Please add Mr. Peanut.

1Incredible! I've picked up a few Marines from this era on eBay, and they're just great characters (in contrast with the plastic "Beaky" box marines which are cool but as faceless as possible...) I can't imagine having a stash like this though!

Very nice, Dallas! I really like seeing the old Speeder - such a great model. The jump troopers must live in terror of 'bird strikes' with those huge turbo-fans on their backs!

Great stuff Dallas. Particular congrats on managing to get the speeder to stay together.

I'm well impressed with this. I love this range of figs. Nice to see a large amount of original jump packs there as well. I haven't painted quite as many in my RT Marine force as yet but have pretty much the same figures either finished and uploaded on my page or on the to do list. Nice work!

I take that back. Not original jump packs on closer inspection but they look great nonetheless.