The latest version of the Warhammer 40K rules was released on June 30. (Here is a photo of the lineup to the till at the local GW store, when the line had shortened after a couple of hours.)

After perusing the rules and discussing tactics and strategy for a couple of hours, I joined Conscripts Brian, Dallas and Kevin for lunch at a nearby Quizno's. Afterward, I went to AlexB's house, where several gamers (including the organizers of 40Kegger, Astronomi-con, and Mechani-Kon) were taking the new rules out for a spin. With two tables available, and everyone bringing 1000-point armies, games went fast. I ended up squaring off against Astro's rules guru, Keith. I rolled with mech Eldar led by a Farseer. Keith rolled with his Adeptus Arbites:

We chose to do one of the basic Eternal War missions. We rolled the "Crusade" mission, fighting over four (D3+2) objectives on the table. Each such primary objective would be worth 3 Victory Points. In this mission, only Troops selections count as scoring, and only when they have their boots on the ground. No more endgame zooming around, zipped up inside my tanks!

I elected to use one of the new psychic disciplines, choosing the default Divination power Prescience, which is like Guide but better - the target friendly unit gets to re-roll all misses, both shooting and close combat.

Looking south, the four objectives were placed generally towards the centre and eastern portions of the table. The river was counted as a toxic sludge kind of affair. Keith won the deployment roll, and chose to go second. You can no longer use null deployment, so I castled up a few skimmers, and left an Avenger Wave Serpent and the two Hornets in reserve. The Farseer rode with the Fire Dragons. Keith set up everything in a line across the north from the centre to the east. 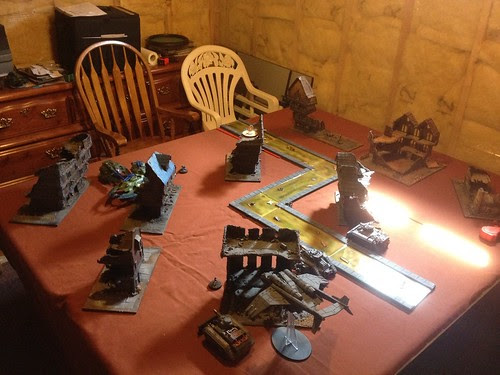 Moving east and north, the moving Eldar castle pulled off some Hull Points from a couple of vehicles. Vehicles are easier to damage, but move more and are more easily able to get cover saves, especially skimmers that get a jink save of 5+. 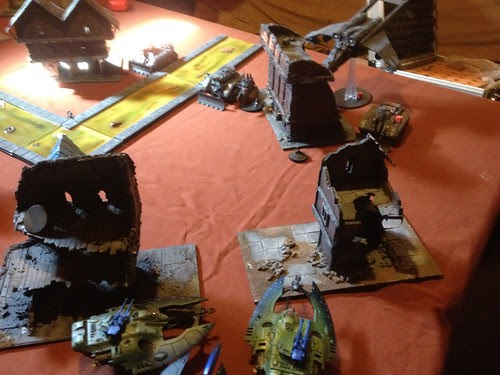 Casting was a 5th edition ploy (to give each other saves) that DOES NOT WORK now. Blast markers inflict damage at full strength to the limits of their radii. Accordingly, Keith dropped a Demolisher shell on one Serpent, damaging it and destroying the Warp Hunter and the Dragons' Serpent!

Note to self: always keep skimmer tanks moving and at least 3 inches apart! 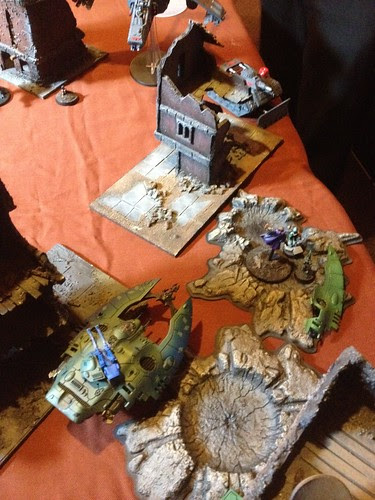 A subsequent shot from the flamethrower tank killed the Farseer (S6!) and a Dragon, leaving only an  Exarch alive. These two shots scored two VPs for Keith, for "First Blood" and "Slay the Warlord". These Secondary objectives remind me of Astronomi-con and the NOVA Open, which feature alternative ways to win games.

Passing his morale, the Exarch charged the Hellhound, easily destroying it with a melta bomb. The Valkyrie was shot down by an Outflanking Hornet, which had come on from the east from reserves.

The surviving troops from the Valkyrie unloaded everything they had into the Hornet, taking all its Hull Points, destroying it (in the photo below the empty base is the location of the wrecked Hornet, the unicorn marker represents the destroyed Hellhound). 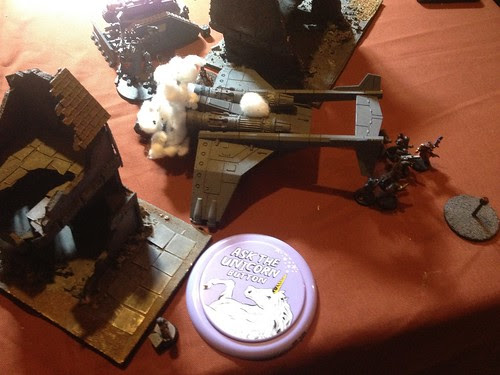 The Exarch felt frisky, and advanced on the Arbites and Commissar, wiping out all but two with his Dragon's Breath Flamer, despite "Look Out, Sir" shenanigans used by Keith to try and protect the squad's Sergeant with the Commissar. 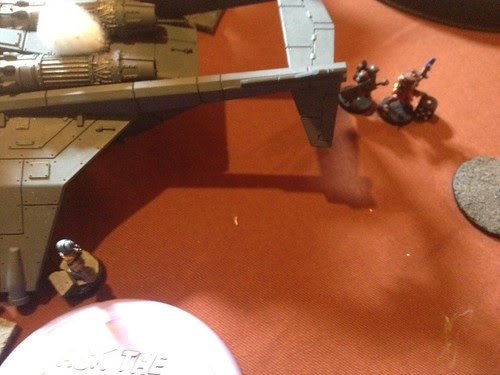 The Exarch finally went down to a Plasma Pistol shot. 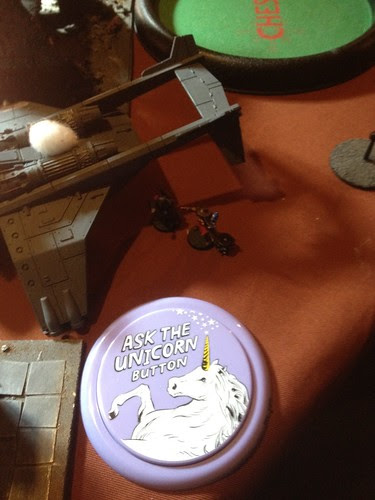 The Commissar then headed south, to join the party starting there. The lone Imperial Guard trooper moved west into the ruined building to control the northmost objective placed just outside. The second outflanking Hornet subsequently blazed the Arbite away, despite his Going to Ground to increase his cover save. Keith now had only one scoring unit on the table.

In the centre, the Chimera was immobilized on terrain and was subsequently destroyed via Hull Points. Its troops disembarked to attack the southernmost objective. They tried an assault, but received enough casualties such that, when the closest troopers were removed, they were unable to roll high enough to charge into contact. Closing in to assault is harder now, which bodes ill for close combat formations like Gaunt broods and Ork Boyz mobs.

Below, the Avenger Serpent to the east has just immobilized itself on bad going (the crater where the Warp Hunter blew up), but its Avengers were able to move up 6" to bring their fire to bear on the Arbites in the centre. Keith stands to the right, while Lance looks on in amusement. 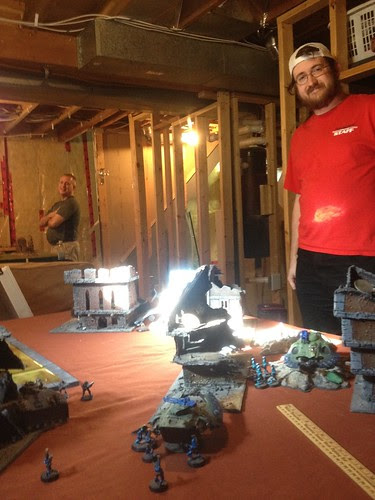 By the end of the 5th turn, the last of Keith's scoring units were gone, and the Commissar and Sentinel went down to Eldar tank fire. However, his Demolisher tank was still mobile and able to fire.

Two Avengers in blue armour held the southern objective. Despite Running, the teal Avengers were about 1/4" too far away from the objective to score. The Demolisher thus tried a shot against the two hapless blue Dire Avengers, killing one... 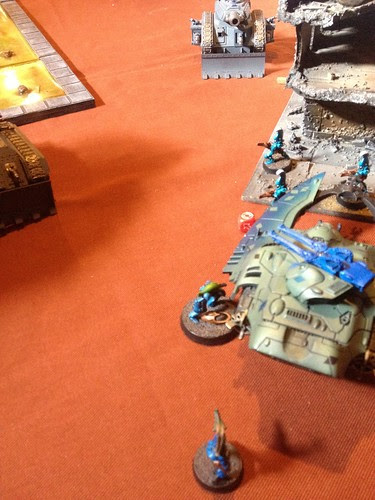 ...whereupon the lone surviving Avenger passed his morale and Keith rolled a "2" for Random Game Length, ending the game.

The game was very fast and fluid. Vehicles are able to move and fire more, with the new movement and snap fire rules. They are harder to suppress, since glances do not roll on the damage table. However, vehicles are more vulnerable to destruction due to the Hull Points rules.

Aircraft are new. Eldar do not have any dedicated anti-aircraft weapons other than the Forge World Fire Storm anti-aircraft tank (yeah, I painted such a turret to go onto one of my tank hulls) and Nightwing Interceptor. I thought hard about fielding a Fire Storm, but at a base 180 points it is too costly to field when for that price I can get a Serpent and most of a Hornet. I may have to rely on the plethora of Eldar twin-linked guns to take on enemy planes.

The way deployment and reserves work, you cannot null deploy. In fact, you lose if you have no figures on the table at the end of a turn. Reserves are easier to get (3+ on turns 2 and 3, automatic on turn 4). So my usual "Reserves Denial" tactic is gone, and gone with it is the burning need to field an Autarch. A cheap Farseer gives anti-psychic defense with Runes of Warding, and the new psychic disciplines are cool and powerful.

For most of the new scenarios, scoring units are Troops choices standing on the ground. I may end up fielding full sized Dire Avenger squads with Bladestorm again! Some of the new scenarios turn other Force Org choices (Heavy Support and Fast Attack) into scoring units. "The Relic" scenario has a single objective that can be picked up and carried embarked inside vehicles, like in several Astro scenarios. All very interesting.

I spent the last couple of weeks going round and round trying to come up with an Eldar list for 6th ed. Ironically, I have ended up with a 1000 point list similar to what I would have fielded for 5th, barring the presence of the Farseer:
Slightly fewer Vehicle Upgrades, to allow for an extra man in each squad. 1500 points may add a Night Spinner, a full squad of mechanized Avengers, and some Warp Spiders.

I need  to play several more games to get into all the changes. Dark Reapers seem more dangerous now, especially if their Exarch has a missile launcher and Crack Shot (no cover saves!). Swooping Hawks and artillery may be coming back into my forces. However, I still see no need to field my Howling Banshees - they cannot even charge out of a stationary transport any more. The general consensus from the gamers I talked to was that 6th ed. 40K is a more tactical game, and a new and interesting way to play. I look forward to the challenge the new edition has brought!

Thanks again to Alex for hosting, and to Keith for a great game.

Interesting thing I noted reading through the basic rules - it looks like moving effects apply on a model by model basis. As long as you maintain unit coherency (2"), some figures can move while others can remain stationary - great for Heavy Weapons! It used to be that if any figure in the unit moves, the whole unit is considered "moved" so Heavy Weapons couldn't fire. It probably won't make a HUGE difference since you have to maintain coherency, but at least it makes more sense!

Actually in the olden days you could leave the heavy weapon stationary while redeploying the rest of the squad, or at least I remember playing that way at some point. They didn't have Internet FAQs back in the day.

The reason I wanted to comment was the tidbit where you loose if you have no models on the table. It seems to me the Americans and their tournaments had the optimal strategy of putting your entire army in reserve with the optimal counter of being putting your entire army in reserve. Thus wasting the entire game of a turn in which you'd driven or traveled 100s of miles to play six games of 40K...

Of course I also think they put too many models on a too small of a table at their events, necessitating the put everything in reserve strategy just so they can move their half a dozen or so unpainted Chimeras/Razorbacks...

Anyway good job typing up the first battle report I think I've read. I don't think the rules changed a damn thing for me. I'll paint what I want, field what I can. The new Chaos Codex may be a bigger change. I will use allies as I have plenty of old models that never see the table, that can now be used as allies.

With the casualty allocation rules it also means heavy or special weapons can gain ablative wounds. It's an interesting choice. Special weapons and pistols have a short range, so do you try to get them close as possible to their targets, or protect them?

Good point, Dave, at least there is a tactical choice to be made now, rather than in the "before times" where the last to die from shooting was always the sergeant/HW trooper.

Muskie, I must confess that I am guilty of using the "no deployment" or "null deployment" ploy. I remember facing Mike Knudsen`s Dark Eldar, where we both kept everything off the table at the start. Annoying for your opponent, for sure.

Allies will be interesting. I am thinking of adding some Tau or some of the Crimson Fists Terminators I have been painting. Despite what the rule book says, I don`t see how the Eldar and Dark Eldar would be battle brothers, rather just allies of convenience against, say, Chaos forces.