After a few small diversions I was looking forward to sharing some more progress on my Golan Heights project.  I have had these models finished for a few days, and kept waiting for a chance to take some decent photos, as the lighting in my house is just awful for pictures.  I tried again first thing this morning, and I guess my house is meant to be a monument to soft light - so sorry for the quality on these.

I have added three T-62s and a group of nine infantry to my Syrian forces.  The T-62s are from Old Glory, and the infantry are from Peter Pig.

As I have said before, the Old Glory T-62s are average sculpts at best.  The turrets are a little squished, the detail is a little soft, and the casting on the tread assembly is....an adventure.  I use a lot of weathering on tanks, but I went extra hard with the powders and dry-brushing on the treads and road wheels of these vehicles to cover for the various casting defects and soft details.

My batch of custom ordered bases arrived from Litko, so these tanks have bases.  This is the first time I have based 15mm vehicles - I used to think basing vehicles was silly, but I think it turned out well, and gives a bit of a more uniform appearance with the infantry.  I will go back and add bases to the T-55s and ZSU-23-4, while the rest of the tanks and other AFVs will receive their bases prior to priming from now on.

One obstacle I should have expected, but did not prepare for with the vehicle bases - they warped! It only makes sense I guess - they are thin plywood, and the moitsure from the paint, humidity etc. would make them vulnerable to warping.  I think I will order metal bases for the next round of vehicles....

﻿ ﻿
The infantry are Peter Pig troops from their "Professionals" selection in their modern range. These were test models, so they are not meant to represent a specific squad and there is a mish-mash of weapons - several RPD MGs, a couple of officers and a couple of guys with RPGs. I don't believe Syrian infantry sections were that heavily armed...

I based the infantry individually, and I used the bases sold by 15mm.co.uk as opposed to the thinner bases from Litko.   I used these bases for two reasons: one, I had some handy, while the Litko bases were on order and, two: I think the thicker bases will make it easier to pick up and move the figures without having to grab the figure itself.. 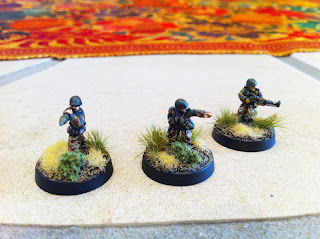 It is hard to see in these terrible pictures, but the infantry have khaki pants and green jackets with camouflage splotches applied to both.  It is almost impossible to find a colour reference of a Syrian infantryman from the 1973 war - the Osprey book does not have one, and I have never seen one on the Internet.  So I just bodged from pictures of their uniforms used in Lebanon (would they have been that different? Probably not, I hope...). 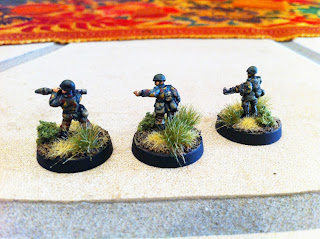 One note of caution to others - I used the new GW "145" paint range on the infantry, and it worked well for the most part.  But I have found that the "Agrax Earthshade" wash - this is meant to replace the universally useful and awesome "Devlan Mud" from the previous range - will often leave an incredibly glossy finish once it dries.  It's not the end of the world, but it is still annoying, and if you want to use it, be sure to have some Testor's Dullcote or similar product handy


At some point I might do some infantry based in groups (as seen in games such as "Flames of War") but I really like the individual look of the infantry in this scale, so I will stick with it and see how it goes.
Posted by Greg B at 5:30 PM

Those look great! The thicker base will be much easier to handle, for sure.

I like what you did with the thanks and the bases do work on the infantry....

Great painting! I really dig the individual base style, you do it well.

Great painting job. You really brought out the detail on the T-62s.

Great work! I am really digging this project.

Those tanks might be limited, but you have sure brought out their potential. Very nice - and I like the camo livery, too.

Moderns isn't really my thing, but the temptation represented by blog postings such as these make it difficult to resist...
Cheers,
Ion