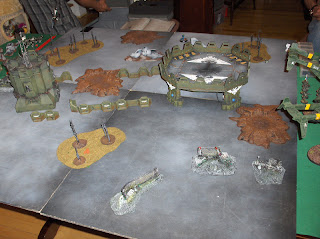 Last Thursday we celebrated the release of 40K v.6 by having two small-point games at my house. This is a style of play that Conscript Dave V. has been enamored with of late; 1000 points played on a 4'x4' table. So I set up out a sub-urban layout with the infamous LED Skyshield pad, an Imperial bastion, some craters, a crashed ship, and some other random stuff to provide cover. Dave came with his Eldar and Greg B. had his Elysian Drop Troops list with Valkyries and a Vulture... I thought discretion the better part of valour and encouraged Greg to take on Dave in the first game. 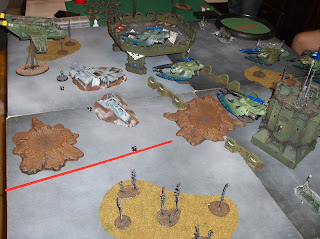 The less said about that, the better, I think... Dave's deployment zone was soon swarming with a "castle" of Eldar skimmers while Greg's aircraft, being "Flyers", were obligated to come on as Reserves, even though they are his troop carriers and have the "Skimmer" special rule also... in 6th edition if you're a Flyer, it's Reserves for you, no choice in the matter. 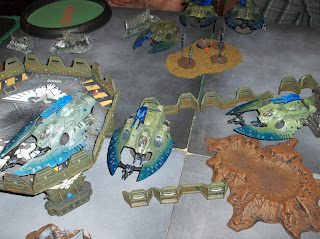 This kind of put Greg on the back foot as he had to deploy something in Turn one, so it was a couple small units of Guard (including a Command squad) that were sacrificial lambs to the Eldar skimmers. Fortunately for Greg his Flyers arrived promptly from Reserve but luck did not go his way as they were quickly suppressed or Immobilized (which, strangely enough, when it happens to a Flyer that is Zooming, means that the Flyer must continue Zooming for the rest of the game). Greg couldn't deploy his troops from their transports in time to shift the Eldar from the objectives... result: Eldar win. 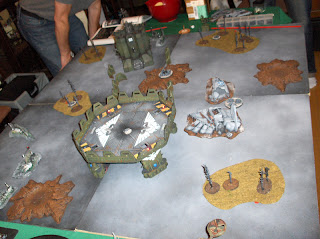 Five objectives were laid out and can be seen above - on top of the landing pad, between the two wrecked ship bits to its right, in the crater above it, in the yellow woods at middle left, and in the yellow woods at centre top right. Control of each was worth three VPs with one VP awarded for "first blood" and killing the other player's Warlord. We rolled for Warlord Traits before the game and I got lucky scoring a "6" on "Strategic Traits" - my Daemon Prince counts as a scoring unit. This would come in handy later... 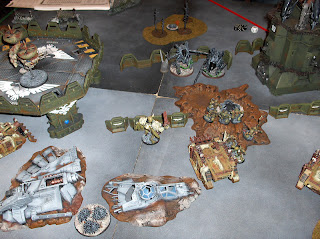 Picking up the action in Turn Three we have a squad of Marines on the centre objective, about to be attacked by the Tyrant and Gunfex... Daemon Prince intercepted this by charging the Tyrant. 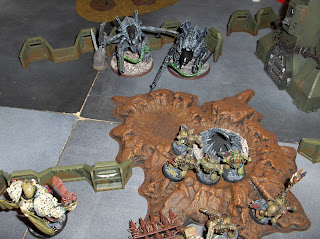 The Prince about to charge the Tyrant, who's had a wound put on by Marine shooting. 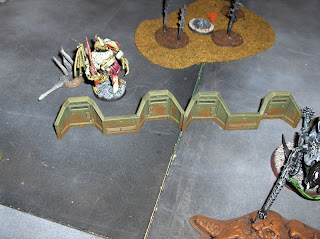 In the ensuing close combat the Prince killed the Tyrant (1 VP) and then dashed off behind the Aegis defence lines, giving the Gunfex a choice - charge the Marine squad or take on the Prince and move farther from the objective. Gunfex chose option "b"... 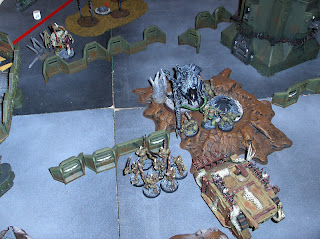 Fex charges the marines and wins combat, but thank goodness for Toughness 5 - the Marines can make Feel No Pain rolls and a couple succeed. More importantly, the change to the Fearless special rule (discussed below) means that the Marines no longer take "overkill" wounds for losing combat. Summoned Daemons are to lower left of the crater moving on the objective just out of shot. 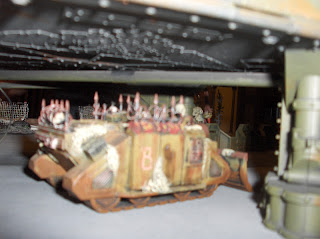 Vindicator was almost forgotten about, lobbing shells from underneath the landing pad! Deviation was our friend this night as one of the large templates deviated right on top of the Warrior brood, killing 3 of them and ending the unit as a credible threat. 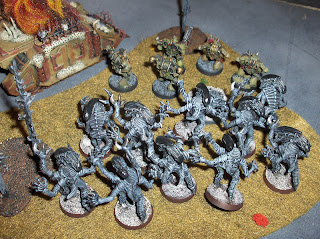 On the Marine left, a brood of Stealers emerged from Reserve but too close to the Blight Drone, which effectively wiped them out with a template shot from its pus cannon (ewww). However, on the other flank, the second Stealer brood emerged a quickly positioned for a charge on the Marines holding the objective there.

No contest - the Marines got eaten. But it was too little, too late, as in the centre the Daemon Prince killed the Carnifex. leaving the Marine squad to hold the crater objective, and flew over to a second objective... while the Plaguebearers held a third.

The final score in the game was Marines: 10 VPs (three objectives plus Warlord kill); Tyranids: 4 VPs (one objective plus first blood). I enjoyed the game but credit good luck for no small measure of the win. The favorable template deviation onto the warrior squad made a real difference in the outcome, I think.

The one rule change that I liked a lot is the change in how "Fearless" works. Veterans will recall that in 5th, if a Fearless unit lost combat it didn't check Morale, but took a number of excess wounds equal to the loss margin of combat. "Hey Phil, we lost combat. Do we run?" "No, we're Fearless, we're awesome!" "Oh wait a minute, we lost by three so three more of us die" "WTF????"

In 6th, there's no more of that. Fearless units never check Morale, take Fear checks or get Pinned. However, they cannot Go to Ground (for an improved cover save) or take advantage of the new rule that allows units trapped in combat with an opponent they cannot hurt (like a Dreadnought or Wraithlord) to voluntarily leave close combat. All in all I think it's a decent tradeoff.
Posted by Dallas at 4:21 PM

I was going to ask if the Plaguebearers were allies or lesser demons but they appear to be the latter. The Blight Drone is also listed as a Flyer in the Forgeworld Vehicle Update so did it start in reserve too?

Finally my Plaguemarine insight is Blight Grenades are Defensive Grenades and Defensive Grenades now give you the Stealth USR when shot at by an opponent within 8". This means if you remember it, Plaguemarines always get an invulnerable save against anything shot at them from within 8". Of course Power Armor and FNP is probably better, but it was a quirk I worked out recently.

I think the new edition makes some good improvements on some of the rules (seems like the brain fart "true line of sight" is gone), but scales back in other (now you have to keep track of vehicle hits - this is a big, big step back in terms of game enjoyment).

On balance, I think this edition did improve the rules of the game. But overall when something is this broken, a few tinkers can't really fix it.

And even when the rules are OK, it is the various "Codexes" that apply a fun-killing, sleeper-style choke hold my on attempts to play -and enjoy - the 40k game.

Boutique factions like the Elysians stand no chance against the firepower of the Eldar. Particularly when they can't get on the table.

I knew that my game would be over, and how it would be over, before a single die was tossed - being forced into "reserves" (which isn't actually a "reserve", but a "pointlessly random arrival") assured that I was toast - period.

So, BBQ the Xenos - and use the codexes to start the fire...

Muskie: The FW update came out one day after the game was played. The drone was used as a skimmer.

RE: hull points: I find any such bookkeeping annoying.

RE: table size: I don't mind playing 1000 points on 6'x4' tables; 4'x4' is just the standard that GW and tournaments like 40Kegger use for that points level. I've actally had fun playing Astronomi-con scenarios (which are balanced for 1500 point lists) with only 1000 point lists - lots of challenge.

RE: Eldar: Their general lack of decent Troops choices and armoured Flyers (AV12) means having to rely on fast units like skimmer tanks and bikes.

RE: Reserves: Putting stuff in reserve now just gets my Eldar shot off the table, too. Tau tabled my Eldar last Tuesday. In 6th edition I am now fielding everything on table, since if going first the Eldar will have a shooting advantage, and if going second there will be hopefully enough left alive for a decent, immediate counterattack.