A poster on TMP the other day asked if anyone had a comparison shot between some vehicles from Red Star Miniatures and some vehicles from Sloppy Jalopy.  I have some from both, acquired in my various rummagings in modern gaming, so here are a few pictures to help with the comparison for anyone who is wondering.

Like all such posts on TMP, this one elicited a discussion arc that seems to flow the same way - scale is not a size, the differences are slight, no they are not, etc.  Just look what happened to this guy when he floated a discussion on 1/56 vs. 1/50 - in short, don't bring it up on TMP unless you want to accumulate stifles and derision.

I'll save my editorial perspective (worthless as that is) for the end.  In the meantime, here are some different pics of the different kits that have seen action with us and our 25-28mm modern and ultra-modern gaming.  Apologies for the unpainted vehicles...

To help a little with the perspective of a gamer, I added some painted infantry to the shots - a 28mm "Chemical Commie" fro Eureka, a 28mm VDV trooper from Mongrel, and a 40mm Russian Federation infantryman from HLBS (from a line that I believe is no longer available....)

Now some BRDM sized vehicles - a 1/43 scale (allegedly) from "Russian die cast" on Ebay, and a 1/56 scale BRDM with an AT-5 Spandrel launcher from Sloppy Jalopy...

Finally, a little fun with some tanks...the T-55 is 1/56 scale from Force Of Arms, the T-55M (with reactive armour) is actually from a James Bond toy series, and is 1/50 scale, and the T-72 is a Kitech kit, which is (very allegedly) 1/43 scale.  The scale of the Kitech kits needs to be taken with an enormous grain of salt, given that ALL Kitech models have an undercarriage of exactly the same size, with the same road wheels! 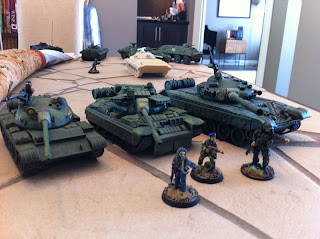 I have snipped and whinged numerous times about 1/56 scaled vehicles.  The tall foreheads (particularly on TMP) will smack you down, lecture you on how you are wrong, not the models, that it is scale creep with the castings etc. etc. All of this may be true - but 1/56 scale just looks off - it's too tight - just odd - I call this the "1/56 effect".  But they are still nice models.

1/43 scale on the other hand looks fine for the tanks - but then I am basing this on a Kitech kit - who knows how close to "correct" the overall model is, and what scale it really is.  But I can't have my Russian infantry ride in 1/56 BMP-2s with 1/43 Kitech tanks on the table - the BMPs look way too small, or the tanks way too big, or both.  I will replace my Kitech tanks over time with Imprint T-72, T-80s and T-90s.  But you can't beat the price of those old Kitechs when we got them....and we have had some very, very fun games with them.  The Kitech tanks are still the only model I have ever used a hammer to assemble.

I have found that 1/50 "looks" the best for me when it comes to 28mm gaming.  The HLBS stuff looks awesome, but I suspect it was scaled to match their larger 40mm figures.  I don't have Red Star figures, but if they are a little bulkier - i.e. "heroic 28mm" - then they should look great with the 1/43 stuff and OK with the 1/50 stuff.

For all my subjective blather, however, it depends on what is available.  You will have your own opinion, and may very likely agree with the majority on TMP who would find my perspective uppity, ignorant and full of delusion (and you may be right). Sloppy Jalopy and others have put a nice 1/56 stuff out there.  Meanwhile, Imprint is expanding a range of 1/50 stuff.  The HLBS stuff is excellent. too. Take your pick, fill your boots, and roll some dice! Screw the scale.
*******
UPDATE - *Correction - July 11, 2012 - the HLBS models are 1/48 scale, not 1/43 scale as was originally stated in this post.  Sorry about that! GB.
Posted by Greg B at 2:14 PM

Personally i think 1/50 is the best scale for vehicles to fit with 28mm figures. What the "tall foreheads" often neglect to consider is that the 28mm figures stand on bases that can increase their perceived height considerably, which contributes in no small measure to the "1/56 effect".

For my part I'm really liking the 1/43 stuff I've picked up from Matchbox and Rio recently. They definitely are chunky, but they don't look like clown cars like alot of the 1/50 scale vehicles I've seen.