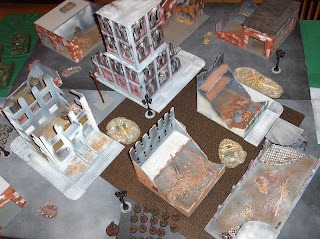 On Thursday night, Greg brought out his "Chemical Commies" to do battle with my MOPP-suited US Army infantry, a pure '80s style throwdown. The scene is West Berlin, D+3. The city has been pulverised by a conventional and chemical bombardment and the Soviets are on the move, rolling through the city. Conscripts Indo, Mike A. and Hugh ran the Reds while I controlled the NATO force. Greg ran the game; Mike F. and Brian added comments from "behind the lines" ;-) 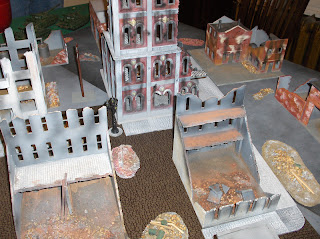 I laid out a 4x4 foot table for continued amortization of my "Stalingrad" terrain ;-) The Russians entered play from the top of the picture above, with three T-80U tanks and three fireteams of infantry. Their goal was to get as many elements off the opposite table edge as possible, in six turns. 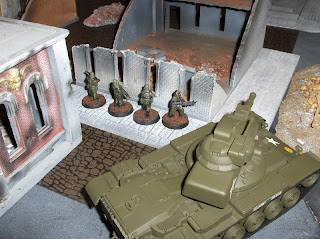 NATO set up their M60A2 "Starship" tank (provided courtesy of Dave V. - thanks Dave!) in an ambush position, eager to test its futuristic gun/missile system against the Soviets. A four man fireteam - one of four deployed in the battle - waits alongside. NATO also had a Bundeswehr straggler with a TOW missile launcher on the table. 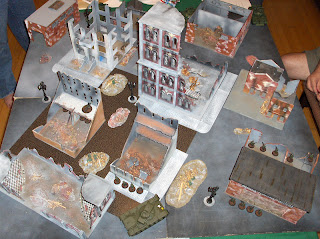 You can see the NATO deployment well from here: from left to right, fireteam in the ground floor of the tall ruin second from bottom, with TOW on second floor; fireteam behind the building next to it with M60 tank; fireteam behind the brick factory building, and last fireteam at the front of that building at right. T-80U just visible at top right! 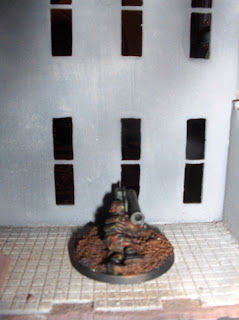 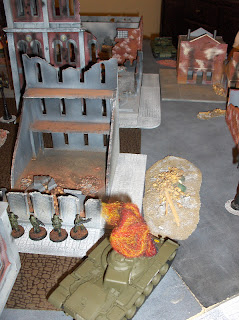 The Soviets won initiative and moved their T-80U up to fire on the M60. Reaction test was made for the M60; the Soviets won that test and blew up the M60. 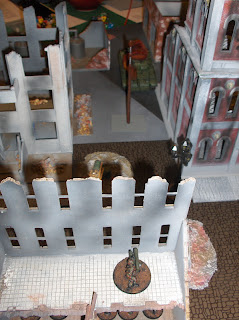 In the middle they activated another T-80U and moved forward; the TOW missileer reacted by firing and blowing it up :-) 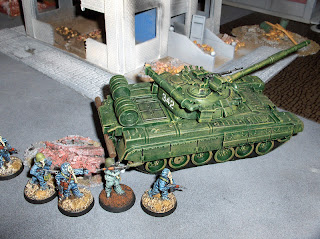 On the Soviet right flank, the last T-80U and supporting infantry moved up, fired on by the NATO team in the building. 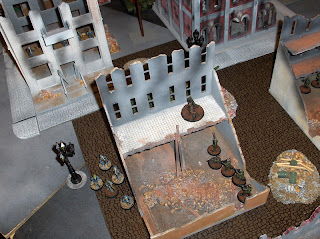 Subsequently, the infantry peeled off to attack the NATO team on the ground floor (they had moved back in Reaction to the T-80U taking aim at them with its main gun, and managed to flee before a 125mm round came crashing in on them). The TOW man shot at the T-80U afterward but succeeded only in knocking out the main gun. The T-80U drove in front of the building. 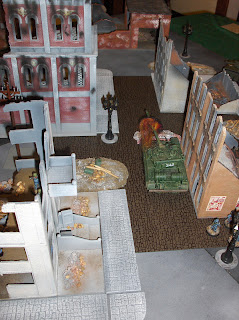 Unfortunately the TOW has a minimum range of 6" so couldn't fire at the tank directly below! You can barely see some Soviets on the second floor of the building at left, preparing to hose down the TOW gunner. He thought discretion the better part of valour and Reacted by moving away from their fire, out of the building and toward the top of the picture, trying to get in position for flank shots on tanks exiting the table. 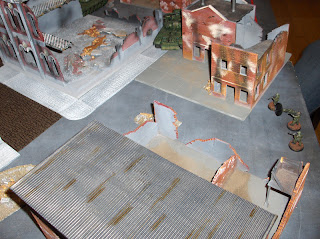 On the other flank, the NATO fireteam, armed with a LAW rocket, left cover to maneuver out for a side shot at the approaching T-80U. One man was hit by Reactive Soviet fire... 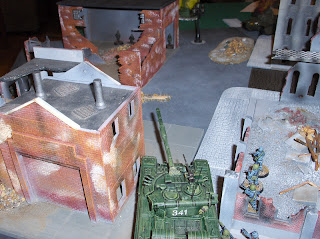 The other NATO team, also equipped with a LAW, positioned itself to threaten the tank's flank if it turned to face the fireteam to its left. (You can see him at the inside corner of the brick building at top left). How clever I am, I thought! 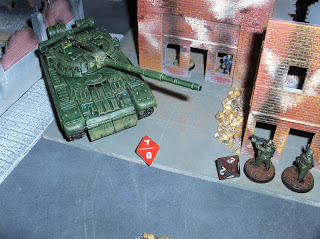 As the T-80U turned the corner, dice were thrown for the Reaction test... as you can see, I lost :-( and the tank proceeded to light up my fireteam with MGs. The LAW rocket fired from the other fireteam exploded harmlessly :-( 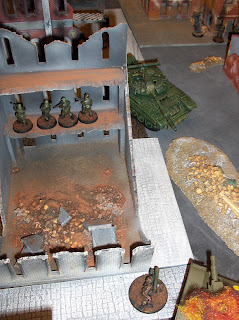 The tank with the damaged main gun managed to escape the table, and on the sixth and last turn, the last remaining T-80U (the one that just lit up my fireteam) is poised to escape. Russians have the initiative, my TOW is in position and a LAW rocket-wielding infantryman is in the brick building just out of shot to the right... 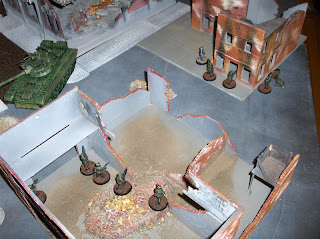 There he is - his base is just visible at lower left. Hugh activated the tank to move off and Reaction tests were made... result: my TOW gunner reacted first with a shot! The tank moves next if it's still able, then the LAW man acts last. Dice were thrown for a side shot with the TOW... not enough to cause any damage. The tank zooms off table, the second Soviet element to escape. 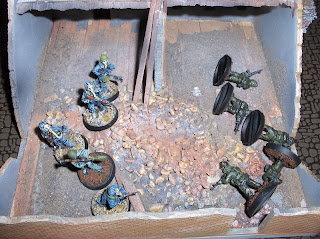 The game ended with Indo's fireteam absolutely ventilating the NATO fireteam in the building. After pounding each other for three turns (and some amazing chem-suit saves by the commies) my dice finally failed and the team was wiped out. At least the Soviets couldn't escape the table to fulfill their victory conditions! Small consolation for the Americans, though...

So the game ended with two Soviet tanks escaping, one with a damaged main gun. Decent result for NATO I think, although the TOW crapped out on some key shots that might have made a difference. LAW rockets were pretty much useless against the tanks - even from the side - but that's OK, it fit the hapless last ditch nature of the scenario.

I really liked Force on Force for this modern game. Greg really has the hang of running it, and it may be slowly converting me into a fan of the "reaction" system, it certainly adds a great deal of tension and decision points to the game. Although for our really large Modern games I think we still favour simpler IGO-UGO rules like our proprietary "Red Storm" set, for a game of this size FoF is the (nuclear) bomb!
Posted by Dallas at 4:15 PM

Great report Dallas. Bit of a tough outing for NATO, but on the other hand they did their job, delaying the WarPac advance.

I am really enjoying the Ambush Alley game engine - but "Red Storm" will still prevail for the truly epic smack-downs, where we fill the table with stuff.

This is great stuff!