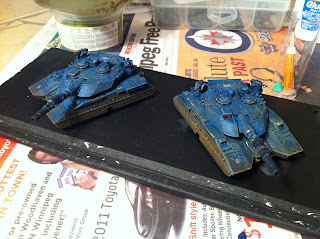 I managed just a bit more progress on the 15mm sci-fi project this weekend, adding a pair of Khurasan's excellent "Siler" heavy tanks to support my Federal forces. I needed some serious firepower to deal with the UNE Superfortress Dallas has added to his Earth Force Marines. You can see from the the picture below that the Siler tank's main gun looks pretty serious. 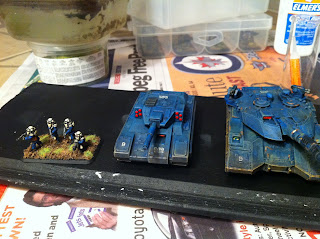 The Silers are bigger than the tanks from Old Crow, and resemble a near-future version of a Leopard 2A6 with the sleek turret. At the same time, they are very, very low to the ground, almost resembling hovertanks or grav tanks. In fact, they sport four sets of treads, two on each side. 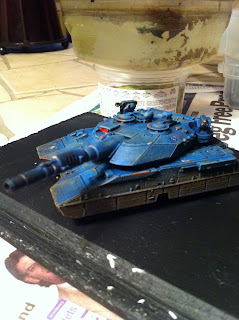 The tanks also sport some very cool anti-personnel cannons on the back corners of the turret. All around a very cool-looking model, and the quality from Khurasan was top notch. 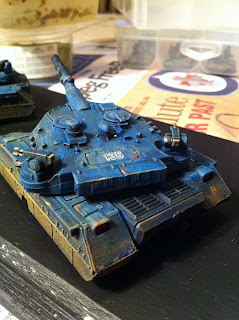 I expect the Silers to play a role somewhat like that of the Shadowsword tanks in 40k - slow, ponderous vehicles out hunting for big game, preferably from a hull-down position, with some minor anti-infantry backup weapons to help out in case of immediate trouble. 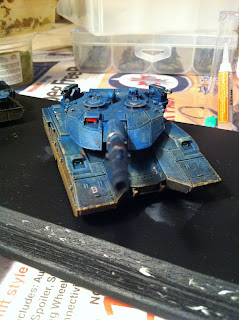 I still have a big 15mm to-do pile - including some more vehicles, and much more infantry (Federal heavy weapon teams, another federal infantry platoon, and reinforcements from the "Control Battalion"). But real life is intruding. These were literally the last models I managed to finish before our pending move to a new house made hobbying untenable. The paints are now packed away, along with the figures, and I look forward to getting some more painting going in a couple of weeks!
Posted by Greg B at 8:33 AM

Wow - those look great (and scary - I worry for the safety of my Merka 5s and Superfortress!)

I broke down and got one of those for my rebel force. I'll try painting it up, so it has a 'liberated' look to it.

Looking great. I like the blue scheme combined with the mud and weathering. Looks great.