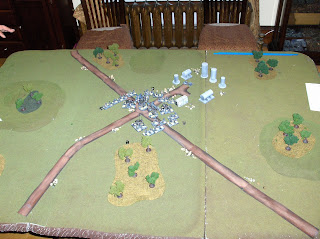 After a drubbing for the humans at the hands (manipulators?) of Mike F.'s aliens, we teed up another battle, this time between my human force and the Machine Army I painted.  How could I lose??

The scenario was "Reconnaissance" from the FWC rulebook.  Basically the attackers deploy in the middle of the table, and have to send units to the table edges and back, gaining a Victory Point for each table edge reached, and double VPs if the unit that reaches the table edge makes it back to the deployment zone.  The defender gets VPs for preventing this, and for killing the attacker's forces. 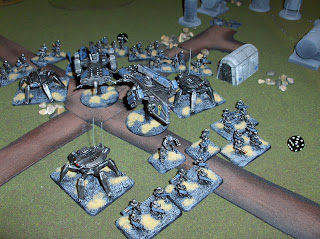 The Machine Army was the attacking force and deployed from drop, in the middle of the table, near a small industrial complex. 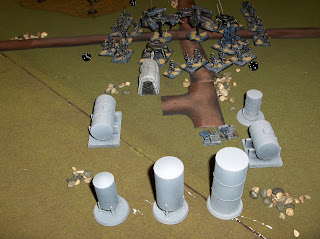 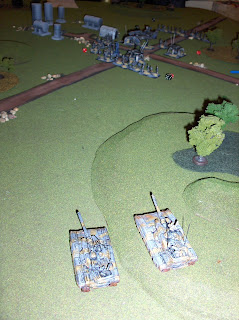 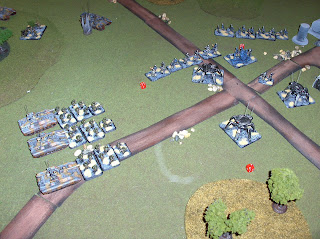 Human troops deploy from their AFVs and prepare to light up the Machines. 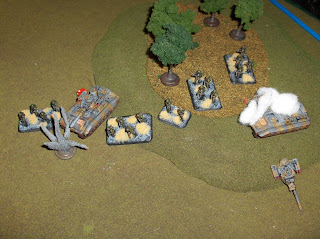 
The Machine advance was inexorable!  In the end, the game was a marginal Machine victory.  Although the humans virtually wiped out the Machines (scoring 2 VPs for inflicting double the casualties they sustained), the Machines reached two table edges and scored 3 VPs total.  Another fun game with the new toys!
Posted by Dallas at 9:20 AM

Thanks for the battle report and pictures. I especially enjoy your creative scratchbuilding skills of both the industrial complex tanks/towers and fencing.

Thanks Jay! I can't take credit for the storage tanks, though. They are HO scale model railroad terrain, but have proven a very useful investment for both 15mm and 28mm games.