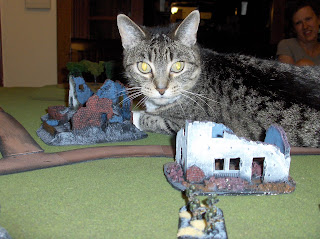 Last Wednesday we played a game of "Future War Commander" in 15mm, supervised by our cat, Leonard. 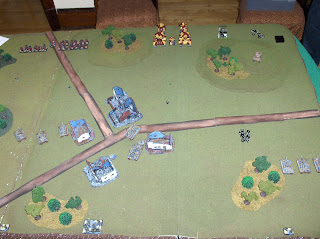 We played a standard "kill 'em all"-type scenario from the FWC rulebook.  Conscript Mike F. brought out ~2,000 points of his Critical Mass aliens (top of picture) - some power-suit infantry on foot, two big tanks, and two APCs with mounted infantry.  I rolled out with six APCs (each with two stands of infantry aboard), two tanks, and two combat flatbeds as Scouts (just out of camera range to the left). 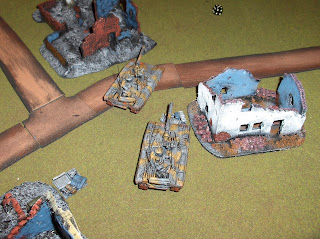 My two tanks took up a firing position in the ruins of the village, sighting in on Mike's two big tanks opposite.  Unfortunately my overall commander shat the bed rather continuously throughout the game, only making his command check once in six turns! 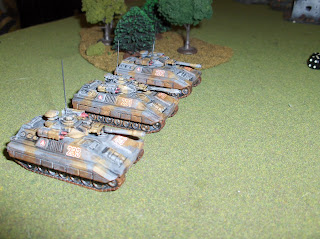 The APCs with mounted-up infantry moved forward towards the enemy lines... it didn't go well... 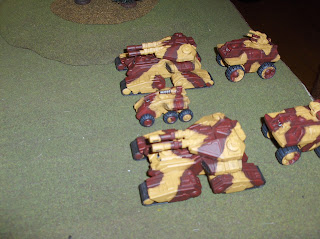 Mike's tanks and APCs moved up, firing on and destroying one of my tanks in the early turns.  Brian moved his infantry-laden APCs up to flank this group and had some success, blowing up a tank and an APC with shooting from his anti-tank stands and APCs.  His detachment were definitely the  Hobgoblins of the battle, achieving local success in a disastrous overall outing. 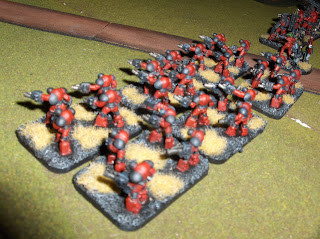 Mike's infantry looked good as they side-stepped into the cover of the woods. 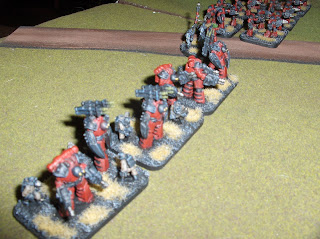 Mike's heavy infantry were killers (5 attacks at range 60cm, 6 hits each with a 4+ save IIRC) but expensive at ~240 points per stand! 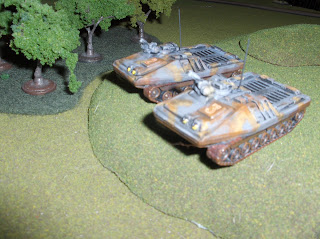 My Scouts ranged in on them with a heavy orbital strike that almost knocked them out... 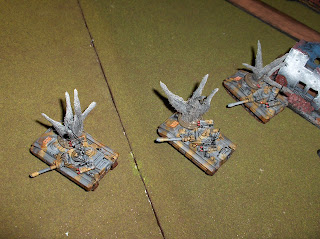 Unfortunately "almost" was the operative word, as the heavy infantry lit up the APCs with three successive shooting actions that put all the vehicles and mounted infantry out of action.
That's my one beef with the "Commander" series of games (and we saw it in a previous Cold War Commander game too) - one unit, with some lucky command rolls, can shoot and shoot and shoot and shoot until nothing remains of its target but the proverbial smoking boots, and there is damn-all you can do about it.  To my mind this is a bit of a broken element in the command system.  At least with multiple move actions, the commanded element is moving farther away from the element issuing the orders, and therefore incurs further penalties for distance, making the lucky rolls more and more difficult.  With shooting, the penalty to command is only one pip per order (as long as you are within command range) and this can be pretty easy to make.  For example, Ld10: first shoot order on a 10 or less on 2d6; second on a 9 or less; third on an 8 or less (still very doable); fourth on a 7 or less (still a 58% chance of success!).
And that was the story of the game - bad command rolls by me + great ones from Mike where needed = victory for Mike.  Our side ended up finally bailing out due to army morale breakage.  I guess this was due to the rules working as they were supposed to, and I shouldn't be a whiny little b!tch about it, but the end result felt a little one-sided to me.  Comments on this below please... but in the end, a fun game with pretty toys, so I can't complain too much!  We'll try FWC again this week.
Posted by Dallas at 10:52 AM

Didn't we come up with something to help deal with that machine gun 125mm from that cold war commander game?

I think we limited it to two activations. Another idea would be to impose an extra -1 Ld penalty for subsequent activations, and/or give a chance of running low on ammo and not being able to do multiple shoot actions for the rest of the game.

I think the reaction fire abilities are one way to moderate a bit of this silliness, but yes - it can be lame...

I have to say I just found your blog and it's great to see people posting FWC reports. Stunning minis, by the way, both of you. In terms of gripes with the system will you let me - humbly - disagree?
Reading your report I feel you made some inherent bad choices, brother. Opportunity fire is a one-shot fire option (at -1, btw) and I think that's what you have a gripe with. That leaving your troops out in the open leaves them susceptible to the enemy opening up and mopping them into history in a flash? Well sorry, mate...but what would YOU do? This is a WARgame, you'll agree. Had you positioned yourself in cover by the time your opponent's turn came about you wouldn't have suffered three or four rounds of shooting. You stay in cover, if and when when you do come out your opponent gets a SINGLE opp fire phase at you at -1. If you screw up he still starts his phase at -1 (so the 10LD you mentioned drops to 9 and so forth)
That said, sometimes, things just go pear shaped and that's as good as it gets.
I enjoyed reading this report and look forward to more, and hope you read my post as what it's meant - loving constructive criticism of how you PUT yourself in a bad spot and paid the consequences. Next time...duck!
LOL!
Ciao!
S.

Thanks for the comment, Comrade! Thinking back, it's not the op fire we were concerned with... it was multiple fires in a unit's own turn. Whether the target is in cover or not, this can lead to really unpleasant results. Fine to say "you should always be in cover at the end of your turn" but you know as well as I that this is not always feasible, due to table layout, scenario objectives, etc. Fire and movement/ moving by bounds can't save you against the hot dice, and in this particular game my command rolls were so dire that there was not much that could've saved me... perhaps it's not to everyone's taste, but the limits we've placed on firing make sense to us, whether explained by low ammo, target obscuration by smoke/dust, etc. It makes a more enjoyable game and that's our prime goal.

Hi, I too stumbled across you by accident. I play loads of BKC, CWC and FWC so was happy to see your report, many thanks for posting it. If you will indulge me I will just say having read your gripes (been there BTW) in my experience 2000 point games are too small, you end up feeling like the dice decide what happens all the time. We play 4000-6000 and finish in 3 hours with great results. Also, we pile on more terrain (from Old Crow) and limit artillery with gentlemen's agreements.