It's a little late, but just wanted to give a big "thank you" to Dallas and Mike F. for rolling out to Brandon on June 5th for Prairiecon. We ran a game of Robotech Saturday afternoon, and later in the evening Dallas ran a game of "Sink the Star Destroyer" (Editors' note - I may have used the wrong name, so Dallas might have to fix that).

With the exception of one gentlemen who perhaps needed to get out of the house a little more, the Robotech game was a lot of fun and looked good thanks to Dallas lending me his industrial buildings which made for a fine "Mars Base" where the Zentreadi and the Robotech Defence Force could shoot each other to pieces. Dallas and Mike were enthusiastic players on the alien side. While the plague of terrible rolling that started with our play test on June 3rd continued for the Zentreadi, the overall result was still a victory for the aliens, if for no other reason than the RDF players were using some pretty beardy "tactics" - like Veritechs hiding behind the destroids, for example - what VT pilot would even go near one of those loser things?

I took a ton of pictures of the game, but somehow lost them (ARRGH!). So here is the surviving pic. I'm so lame! 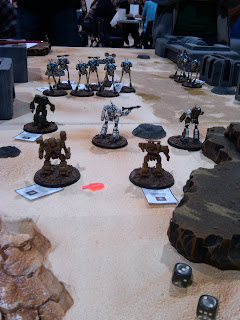 Thanks again to the organizers of Prairiecon for letting us come out to run a game, and to Dallas and Mike F. for supporting and playing!
Posted by Greg B at 1:07 PM