Battle Report - so I guess that was Lasalle...

Last night we assembled at Dallas' place for a first try at the Napoleonic game Lasalle, using 15mm figures. As you might notice from the title, I was kind of underwhelmed by the rules. More on that later in the post.

The game was very basic, set on a 6'x4' table which featured a crossroads near the middle as an objective. We certainly were not attempting a particular famous battle, but rather a plausible small encounter that might have happened somewhere in the 1809 campaign. A hefty Austrian brigade was on the defence, with two regiments of Cuirassiers as reinforcements off table. The French were on the attack (of course) and rolled in with an infantry brigade and a regiment of Chasseurs and one of Hussars. Each side had an artillery battery.

Thanks to the arrival of the Cuirassiers, however, and some red-hot rolling from Bill together with some not-so-hot rolls from Dallas, things got pretty rough for the main attack. With no Cav support on his side, the Cuirassiers started to stomp on Dallas' infantry. The Austrian infantry, with their huge battalions, got in on the act too. Caught by the combined arms, and with my cav too far away to help, Dallas' attack columns got whomped.

Despite the high casualties, we did punch back. My "diversionary" attack actually got some good results, with the Hussars shattering an Austrian battalion that could not manage to make it into a square. Dallas got a pound of flesh too, running over an Austrian battalion in the woods with a well-coordinated punch by a pair of attack columns.

The game ended in a draw - we were actually pretty close to capturing the crossroads too. Both sides were near their breakpoints. But I have to credit the Austrians - they really bloodied the French nose.

Here are some pictures from the game: 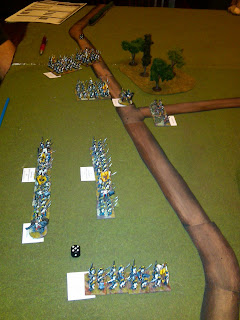 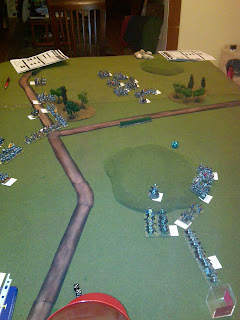 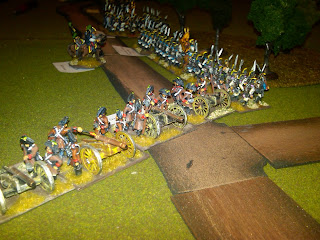 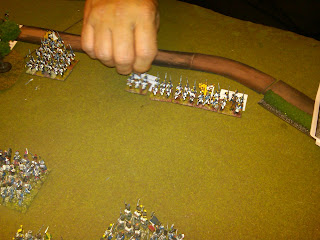 I have to say the rules were a let-down. I had really high expectations for this really intelligent, Shako-consensus-shattering new game and in the end it was a struggle to interpret the rules (which are not that clear in many cases) and there are some things that were just bizarre, like an Austrian line charging a French attack column and ending up with a huge advantage. Generally speaking, the plus-size Austrian units had huge advantages, and in line they can sweep everything in front of them. How did these guys lose the war?

Another whacky feature is how the game turns are counted - one turn is actually just one set of actions by one side. Most of us recognize that as a half-turn. I think the intent, with random turn ending, is to try and incent the players to get everything done that they can, because you could literally end up with the game ending before you have a chance to respond. But the feel was off, and it leads to constant confusion in the rules because this idea of a turn is hugely non-intuitive.

Another nit - no conforming. Considering all the other things you abstract in a game like this, a lack of process where units conform to each other once they contact is a pain, and the board gets cluttered with all sorts of odd angles, bonky formations and frankly looks terrible.

Any positives? Yes - the structure of the game turns. It takes some getting used to, but Mr. Mustafa has really engineered something cool there. Basically, you start a turn by "reacting" to what has happened - you shoot, make countercharges, and resolve the combats. Then, you move. It's neat, because as the commander, you get to unleash your charges, but you don't get to see how they will work out in your own turn - you just have to wait and hope. Seems right to me. It's great effect, but as I said it takes some getting used to, because it is very different from other games.

In the final judgement, the rules were disappointing. I'm not about to write off Shako, even with its challenges, to dive into Lasalle. At the same time, it's too soon to write off Lasalle. The first game with any new rules set can be bumpy, so we'll definitely have to try it again sometime. But don't watch for me to rush out and paint any damn artillery limbers :)
Posted by Greg B at 9:31 AM

Though, of course, I wasn't there, I feel like I have to say that the results of the line vs column fight sounds pretty much what should have been expected. Unsupported infantry in column facing a combined arms force deployed in line should get the smack-down. From everything that I've read of the period column formations were designed for maneuver, not to engage in combat. It was the line formations which were typically preferred for close quarter firefights and melees as the fighting frontage was much larger. This is why many first-hand accounts describe the failure of column attacks. They were great to keep conscripts in formation but a lousy use of tactical manpower.

I'm not sure about the whole unit conforming thing. If memory serves me correctly Shako does not allow units to conform either. Grande Armee does but its set at the Corps level and it feels right set at that level. I kind of like the tactical feel of units not conforming to one another, especially with a battalion level game, but this is just my preference.

Well, I guess next up is Black Powder, eh?

...oh and I quite liked the look of the artillery all deployed out in multiple bases...

Very good looking game. Something about the appearance of massed Napoleonic troops.