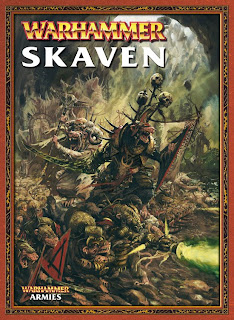 For some time now, I've been thinking about a new army for Fantasy Battle. (Disregarding the thousands of points of unpainted Bretonnians sitting in a box in the closet, of course)

In particular, I've been thinking about Skaven. I've never had Skaven models for any of the Warhammer games, although many years ago I painted a box or two of Clanrats for a friend in a trade, but I always had a soft spot for the furry li'l fellas. In fact during the Blood Bowl craze of early 2010 (we haven't actually played it yet) I bought (and recently finished painting) a Skaven team. Pics of those will be coming soon.

Anyhow, when a Skaven army popped up at an amazing price on bartertown, I jumped on it. After three weeks and a bunch of unanswered emails sent to the seller, I was beginning to smell "ripoff" but yesterday a big box arrived... 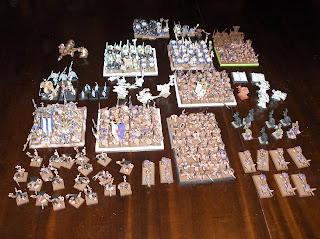 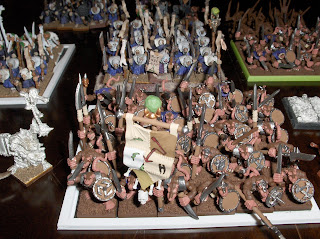 Of course I'be detail painting and relying heavily on the magical properties of Devlan Mud, and finishing the bases, but it shouldn't take long to get most of this stuff table-ready. The characters and some of the other stuff is unpainted but that's perfect, as those are the centrepieces anyway, I'm just happy that the huge blocks of rats are well on their way to completion. 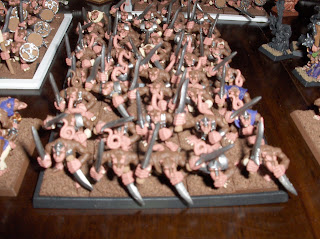 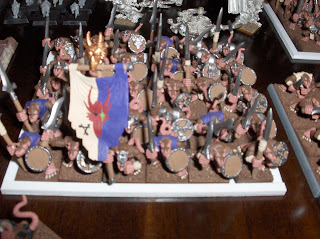 I bet that alot of people have lucked into armies like this, partly painted that is. I'm intending to post periodic progress reports on how the tune-up goes. It may be more work than I anticipate but I think it will be good fun. "Die-die man-thing!"
Cheers
Dallas
ps stay tuned for the new 40K army coming soon as well... what is the matter with me??
Posted by Dallas at 10:34 AM

Have you checked out some of the new rules for Warhammer Fantasy 8th Edition? Changes to things like wheeling and charging have made even slow armies more dangerous.

Yes, but the book's out at stores and people have read through it. For example,

I was just catching up on some rumours while you were posting that, Dave... wow - big changes for WHFB!

Dallas - glad to see you moving in all sorts of directions. It's good to have company...

True line of sight for the new fantasy? Classic case of fixing what is not broken....sigh...

They sure love that true line of sight.

Dallas - How much Bretonnian stuff do you have? Any surplus by chance?