After Action Report - Note To Self: Paint More Grenzers...

Last night we assembled at Dallas' place for a game of Napoleonics, using the Shako II rules. The scenario was based on the battle of Teugen-Hausen in April 1809, when the Austrians, during their invasion of Bavaria, had an opportunity to knock out Marhsal's Davout's 3rd Corps.

Dallas, Cam and Mike F. went with the French side, while Dave V., Bill and myself rolled on the Austrian side. The game was set on a 6'x4' table, with Teugen on one side, Hausen on the other, and hills and forests dominating the middle, and a road and a clearing being the most direct rout between two towns. The objective for each side was to capture the the town on the other side.

The Austrians had an advance guard and two brigades moving down the road starting almost on top of two of Davout's brigades. One French brigade in particular was loaded with experienced batallions who enjoyed elite morale ratings. Head on collision ensued right from the start of the game. 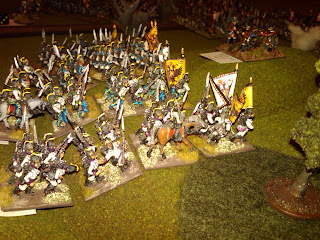 The French side was quite concerned at the fact that the Advance Guard for the Austrians, run by Dave, was almost on top of them at the start. The Advance Guard had two regiments of light cavalry, some Landwher (poor quality infantry) and some Grenzers (average conscripts drawn from border marches toward the Ottoman empire).

Although the French were griping, I figured the Advance Guard would be lucky to be a speed bump in the face of the French vets. On the Austrian side, we hoped Dave would die gloriously (or failing that, at least die in place) while we moved up and flanked the French with our massive field battalions.

And indeed, although they had no cavalry on hand, the French units ventilated the Austrian cavalry and defeated them in two turns, at the cost of a few skirmish stands. Even though Bill's brigade moved into the gap to fill in for the empty saddles, I was concerned, because my flanking brigade was taking a very long time to move to its objective. 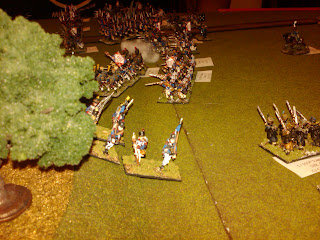 The French flank - I never got there...

Bill's brigade started to get lit up as well at this time. But Dave V impressed everyone (well, on the Austrian side at least) with an incredible performance by his Advance Guard. Although the history books indicate the Grenzers were conscripts drafted from the border area of the Ottoman region, based on Dave's rolling last night, Grenzers appeared to have been an elite formation armed with machineguns. 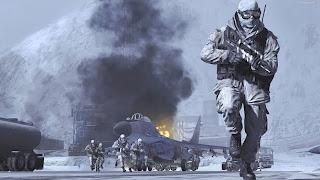 Dave V rolled "6" after "6" for his musketry witht the Grenzer unit. They ventilated two elite French infantry battalions, and halted the charge of a third, basically stalling the advance of the elite French brigade, even as Bill's brigade of regulars began to waver. For the French side, Mike and Cam had a tough time hitting the broad side of a barn, much less the "Croation Sensation" Grenzer battalion that was in the way.

To add insult to injury, the Landwher battalion defeated a battalion of French regulars in melee! 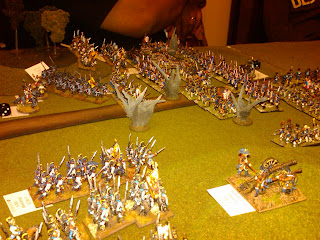 Austrian grots hold the line, while regulars eat cannister and start to fold

Even with this heroic effort, by turn 8 the French were starting to punch through, so while we had to call the game at around midnight, it was definitely tilting toward a French victory, even if it would be one with a bloody nose.

Thanks to all for coming to play, and to Dallas for hosting once again!
Posted by Greg B at 11:28 AM