Heroes of the Riddermark

It took a while, but I finally finished my dismounted Heroes of the Riddermark. I still have five mounted heroes which are already in progress, but they will have to wait for another post. With the exception of the Éowyn figures, all the rest had a ton of fine detail on their vambraces and greaves that took much longer to paint than I had originally anticipated, hence the two week gap since my last post. I was also unhappy with the flesh tone I had initially selected for Éowyn (Vallejo Light Flesh) which came out looking too pale and pink. After a few attempts to fix it with some washes, I decided it wasn't going to work and scrubbed all three figures back down to the black primer using Simple Green cleaner and a toothbrush. I guess that is one of the advantages of doing the faces first.

My nine heroes were photographed in front of a 3D puzzle of Meduseld, the great Golden Hall at Edoras, the capital of Rohan. To my knowledge, with the exception of the Rohan Royal Guard, all of these figures are out of production or have replaced by new sculpts. 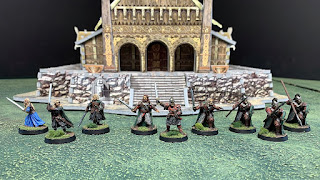 Below are Hama, Captain of Rohan and Doorward of Edoras, Éomer, Marschal of the Riddermark, and Gamling, Captain of Rohan and Royal Standard Bearer. (The mounted figure carries the Royal Standard, and a newer sculpt released by GW has the dismounted figure also holding the Standard. I have a second Gamling figure that came with a bulk eBay purchase that I may convert by putting a standard in his hand.) Éomer had the most raised detail that needed to be picked out with a fine brush, but was the easiest of the three to paint due to not having a lot of deep recesses where it was difficult to get a brush. 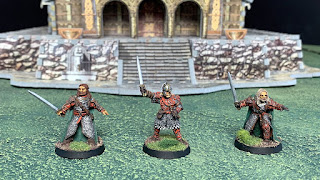 Next are three different sculpts of Éowyn as a woman of Rohan, or in armour from the Battle of  the Pelennor Fields. They came from different GW boxed sets of heroes from their Middle-earth range. (Heroes of Helm's Deep, The Fall of the Witch King, and Heroes of the West) Other than having to start over on the faces, these three were the easiest to paint as the armour consists of plain leather vambraces and riding boots. I am happy with the final result. 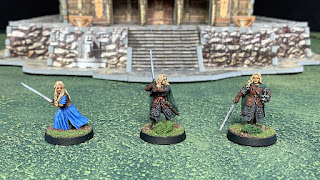 Lastly, three men of the Rohan Royal Guard. A lot of fine detail on vambraces, greaves, and shields bogged down the rate of progress on these, but I like the rich green on their cloaks and shields. They are now ready to do their duty as the King's bodyguard. 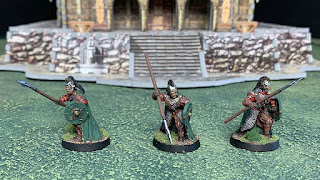 Next up will be the five mounted Heroes of the Riddermark. After that, I think I will need to take a break from all the fancy detailed armour  and work on some grot Mordor orcs or Fighting Uruk-hai.

Until the next post, stay safe and healthy. Hopefully we will be able to meet around the gaming table soon.

I'm a bit jelly- I have A LOT of LoTR figures but few of these heroes and you have done a great job of them.

They are rather fantastic I must say