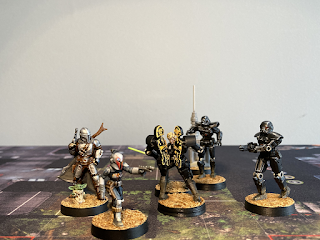 In Season 2 of the Disney+ television show, 'The Mandalorian', Dark Troopers were introduced as new villains for the Star Wars galactic heroes to overcome. They kidnapped Baby Yoda (Booo!), and helped defend Moff Gideon's light cruiser. These evil mooks were given a comic book origin; this third generation of trooper were no longer armoured humans, but powerful droids.

I wanted to introduce a few of these impressive troopers to our games of Star Wars Legion, but they are not manufactured by Asmodee or Atomic Mass Games. There is a strong community of sculptors and gamers out there, creating rules and figures for as yet unreleased or non-canon characters.

Accordingly, I picked up a couple of suitable 3D printed figure sets online to use as proxies: a 5-figure strong "Authority Dark Droid Squad" and a set that consisted of a "Rescuing Hero Wizard" with "Sliced Droids". For the latter two, one is crushed as if by a giant invisible hand, and the other is sliced in half from head to crotch, showing off its interior machinery.

[The header photo above shows the Jedi Master Luke Skywalker figure I painted, fighting off a couple of Dark Troopers, as Mando & Baby Yoda (which I purchased for a fundraiser), and Sabine Wren (also my painting) prepare to deal with another.]

These 7 models are nice renders. I don't have a 3D printer, so I ordered resin prints, which had fairly subtle artifacts of printing (those horizontal lines). They are brittle; a couple arrived broken, but the resin broke clean and were easily repairable with super glue.

Studying stills from the show, they are basically black shiny armour with a few metal bits showing at the elbows and knees, with glowing red eyes and 4  lights on their chests. The armour really reflects lights sources.

After undercoating them with Chaos Black I under painted the guns with Vallejo Grey Black and painted the joints with various grey acrylics. I kept the rest simple. I arbitrarily selected a single light source located to their front and slightly to their left sides. I worked up reflections and catch points using indigo and titanium white oil paints. Other amour highlights were slightly rendered with neutral grey oil. I picked out the eyes and chest lights with GW Evil Sunz Scarlet. The sliced up one was further detailed with various orange and yellow acrylics and oils. Groundwork was Golden Garnet Gel (Fine), painted to match the sandy bases of most of my other SWL models. To finish I dirtied up their legs with Vallejo weathering powder, fixed with Vallejo Pigment Binder. 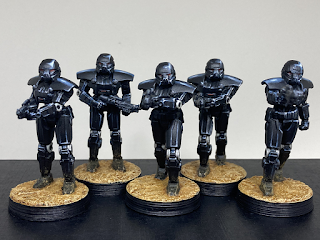 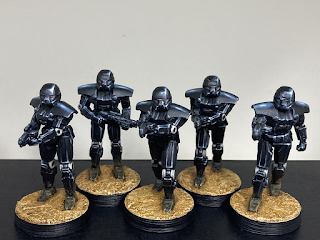 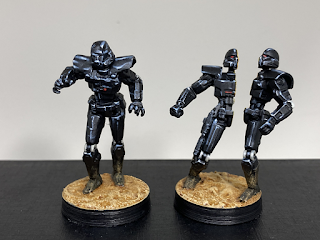 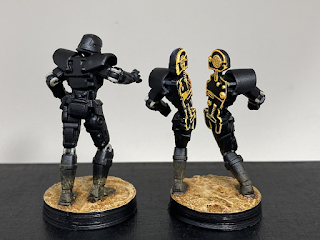 In the game these models are tough, shoot a strong gun, and are fearless, but they are not strong in close combat. Plus, characters with lightsabers will trash them. There's also online social media groups for unofficial game cards. 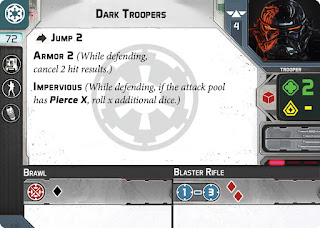 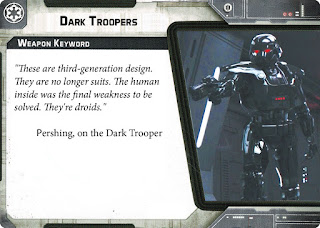 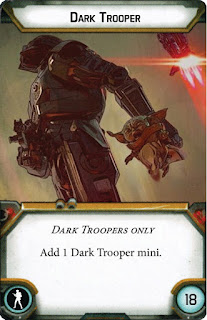 These were fun to paint and are a menacing addition to my Star Wars Legion collection.

Wonderful painting. I love how you treated the reflective armour.

So cool! I love the split apart Dark Trooper!!!

Nice work, especially on the reflections!