This is the second part of my 'Heroes of the Riddermark' project. It consists of five mounted figures depicting Théodred, Éomer, Gamling, a Rohan Royal Knight, and Éowyn. I had actually started the project by painting the horses, but then moved to the dismounted figures before coming back to finish the mounted characters. As much as possible, I tried to match the colour palette between the foot and mounted figures of the same character, so I kept the completed dismounted figures on my workbench to use them as a reference. I painted two of the horses as bays, two as chestnuts, and one as a dun, so only one new colour scheme for my horses having already done a chestnut and a bay on some mounted Gondor miniatures. 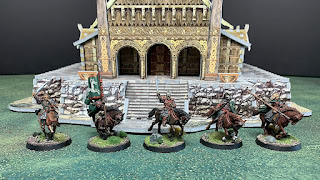 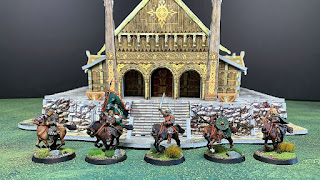 Théodred was a Prince of Rohan, and the only son and heir of King Théoden. He was slain by an Orc-man in the First Battle of the Fords of Isen. I copied the paint scheme on his armour from the Games Workshop website, and painted his horse as a dun. Alas, I only have a mounted version of Théodred. Dismounted figures are still available, but only as a part of a set, which makes it an expense proposition for only the foot figure. 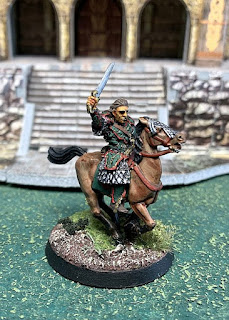 Éomer, Marshal of the Riddermark, is the nephew of Théoden, and one of Rohan's foremost warriors. I gave him a bay to ride. He will make a nice addition to the tabletop. 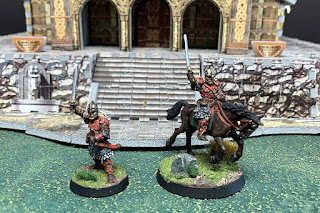 Gamling, Captain of Rohan, is the Royal Standard Bearer. This was probably the most difficult figure to paint due to the sculpted standard with all its folds and creases. There is no raised detail on it, so I had to paint the running horse freehand. It was why I did this one last. I also mounted him on a bay. 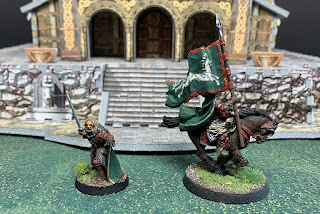 A Rohan Royal Knight, he is part of King Théoden bodyguard. I mounted him on a chestnut with two white socks on its front legs. I still have a two more of these in unopened blisters, but I will leave them for another day. 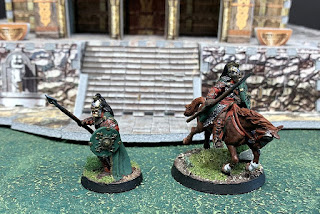 Éowyn, Shieldmaiden of Rohan, is the daughter of Éomund and Theodwyn, younger sister of Éomer and niece of King Théoden. Disguising herself as Dernhelm, she fights at the Battle of the Pelennor Fields, where she and Merry kill the Witch King of Angmar. I mounted her on another chestnut. Since it was the only horse of the five without a chanfron, I gave it a blaze. 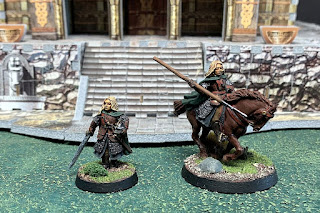 With the exception of Éowyn, all the other figures have very intricate designs on their armour. I found I could only paint one a day before my shoulder and neck muscles started to tense up trying to maintain the fine control on the tip of the brush.

Time now to move on to 'building an army worthy of Mordor'. Stay safe and healthy until we can meet around the wargames table again.

You've done a great job on all those figures - your freehand banner for Gamling is better than my version of that figure, that's for sure! \
I'd love to hear more about that building in the background!
Cheers,
Michael

Fantastic work Frederick - and bravo on the banner, well done.

@ Mad Padre - the building is a 3D puzzle of the Golden Hall at Edoras produced by Wrebbit. The base measures 40cm wide by 50 cm long (16" x 20") and consists of 742 pieces. The scale is smaller than 1/56, but it works well enough on the wargames table. I bought it 15 or so years ago from a local puzzle and games store. Unfortunately it is no longer in production, but occasionally available on aftermarket sites like eBay (for over double what I paid).

These look really good - I especially like your Eowyn.