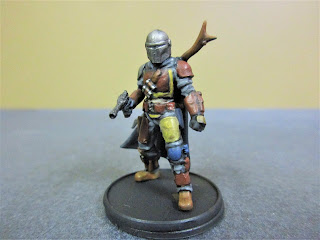 Knocked off a little painting a couple weeks ago... this 3D print of The Mandalorian, star of the eponymous Disney+ Star Wars TV show. 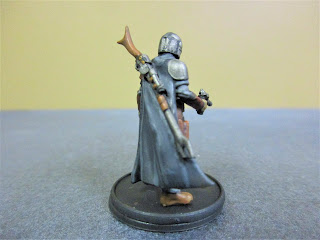 Conscript Dave V. had picked up the model online as a possible candidate to use with his Star Wars Legion collection. Unfortunately it's just a bit too small to fit well with the scale-creep 32mm figures produced for that game... which meant that he's just about right for my collection of true-28mm Wizards of the Coast "Star Wars Miniature Battles" figures. 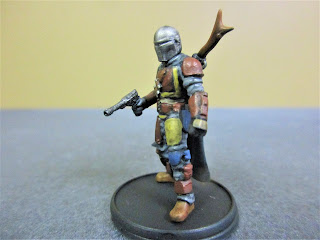 As you can see, it's really a nicely designed model and painted up well. I'd never painted a 28mm 3D print before so I was a bit surprised by all of the "runners" that required cleanup, but most came off quite easily... except for the one that broke off his pistol. But that was easily fixed with superglue. 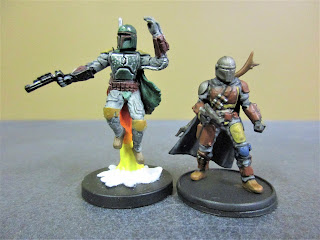 Here's "Mando" pictured with another dude in Mandalorian battle armour from the WotC lineup. Mando fits in great on his double-base - they're Warlord plastic bases left over from another project.

Like all of the models we've painted recently, we continue to wonder when we'll be able to get them out in a traditional tabletop game. It'll be especially fun to plan some scenarios for Mando, what with Imperial Stormtroopers, other bounty hunters, killer robots, and all sorts figuring into his TV adventures... I'll just need to scrounge a print of the Child to tag along with him!

Stay safe everyone!
Posted by Dallas at 8:41 PM

Very envious of that one, shame he doesn't fit with the new Legion stuff though.

Just use him and endure the "aren't you a little short...." gags.