While Dallas and Greg have been pumping out models with regularity, my progress has been slowed by school being cancelled and at home learning g being implemented. This program has been a failure in my opinion as although  technology has allowed us to attempt remote learning, it is not yet capable of the task asked of it. Thankfully the school year is ‘officially’ done and I’ve been able to carve out a few hours of painting here and there. First up there s a unit of troops for my 30k militia force. Models are from anvil industry and are armed with lasrifles. The rules allow you to buy augmented weapons which add +1 to the strength of las weapons making these long range bolt guns. A bolt gun isn’t anything to get excited about when your fighting  World Eater Legionnaires swinging a chain axe at your skull, but it’s better than strength 3 I guess. 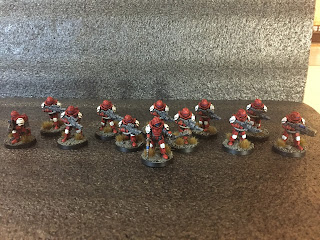 I’ve also reorganized my existing Imperial Guard army to fit in with the 30k list. It’s pretty basic and would be used to add some fodder for the Traitor Legions. I purchased some new turrets for my Leman Russ tanks from Kromlech. The turrets fit perfectly and have almost every weapon option for the tank. I opted for the demolished, battle cannon and twin lascannon turrets. I added some Sons of Horus transfers to show off their new allegiance. I’m sure Horus will be considerate of their crews lives. 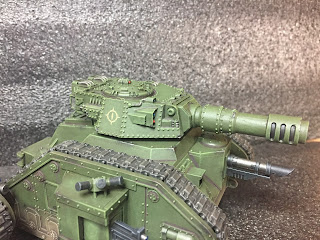 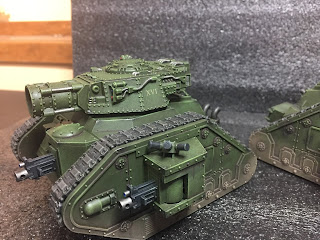 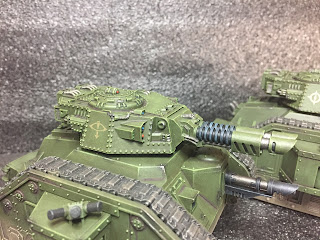 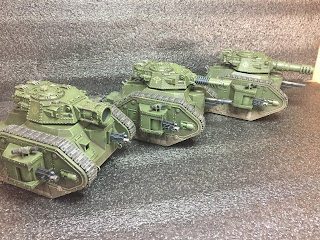 Great looking militia here Mike! Love the colour scheme. They'll be great as a Space Marine speedbump for sure ;-) or as an opponent for xenos or my Vraksian rebels!

Great looking stuff Mike - as Dallas says, excellent stuff for the Legion marines to run over - or to stand against Dallas' sinister rebel guardsmen.

Lovely work Mike. I really like the look of those militiamen and the new turrets are terrific.