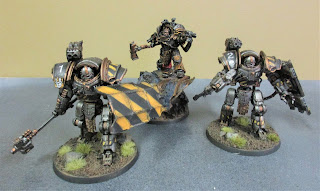 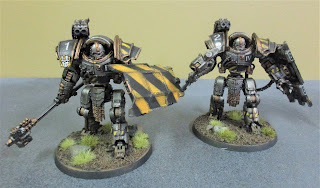 We'll have a look at the Iron Circle battle-automata first. These are robots, of course - creations of the Adeptus Mechanicus modified by the Primarch himself to serve as his personal Honour Guard. Apparently Perturabo assembled six of these machines as his "Iron Circle" following an incident where an Imperial Fists kill team managed to infiltrate his flagship, the Iron Blood, following the Battle of Phall. 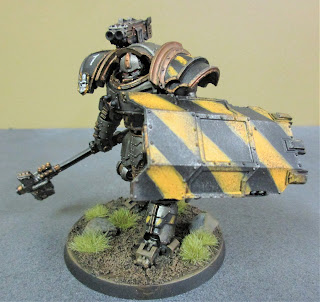 The Iron Circle are armed with Graviton Mauls and Karceri battle shields, as well as shoulder-mounted Olympia-pattern bolt cannon. The models are very straightforward to assemble, with the exception of two elements... 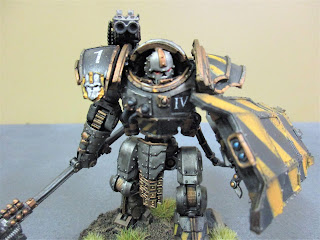 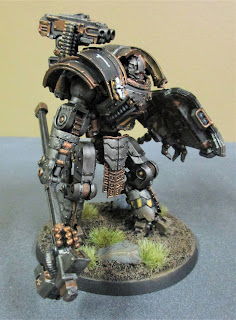 The legs, often a particular bugbear of mine, assemble easily due to the fact they go together in only one way. I often have problems assembling legs since it can be tough to ensure that the hips and pelvis of the model are level. However there's no problem this way with the Iron Circle robots. 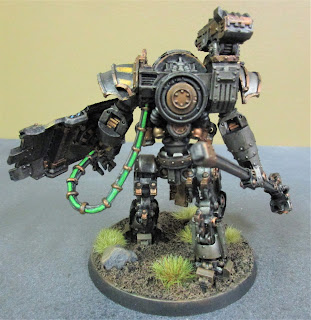 One of the difficulties, however, is pictured above - the long power cable stretching from body to left hand. Of course, modelers have significant flexibility in how the model is assembled and that precludes Forge World from providing a "pre-formed" length of cable. Their solution is to supply a straight resin cable and instruct modelers to heat it in hot water and bend it to suit placement on their particular model. You can guess how this goes in many cases... resin is insufficiently bendy and breaks into pieces when it's being bent to shape. This is exactly what happened with Unit 1. To fix it I had to run a piece of stiff wire, bent to shape, between the unbroken ends of resin cable I glued to the body and fist. When I was happy with the shape, I rolled thin cylinders of greenstuff and attached them to the wire, matching the cast resin cables. The final step was to build and attach the bronze cable stays, again out of greenstuff. Arrrgh. 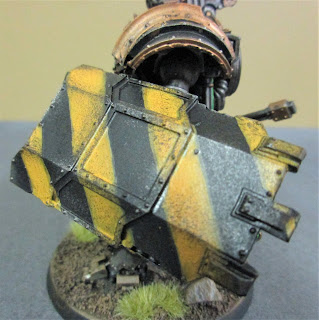 ANYWAY... the Karceri battle shield looks pretty cool painted "chevronny" in the good old IV Legion style. The shields were extensively chipped with a mix of Rhinox and craft black on the yellow parts, and Leadbelcher on the black parts. 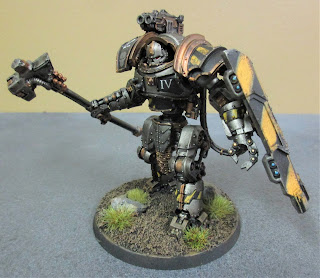 Unit 2 was painted in the same way - base Leadbelcher, bronze parts Brass Scorpion, yellow parts Zandri Dust/Averland Sunset, the whole washed with a mix of Agrax Earthshade and Nuln Oil. 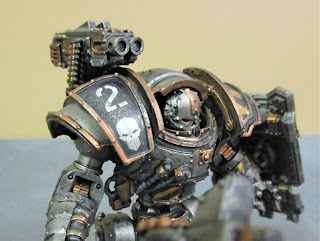 Here's the second beef I had with assembly - similar to the power cables, the ammo belts for the bolt cannon were straight resin pieces meant to be heated and formed to shape. Well screw that - I knew what was coming, so just cut some straight pieces of belt and attached them to the cannon. 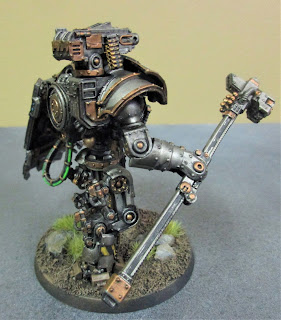 The maul is a wicked looking weapon! 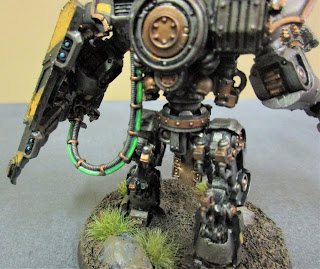 The cables on Unit 2 actually bent and formed very well - this is what they're "supposed" to look like. 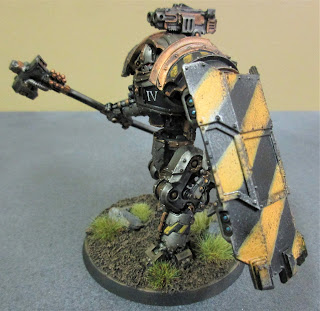 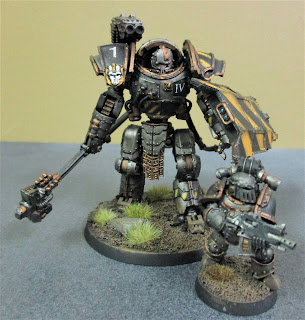 The Iron Circle robots absolutely tower over regular infantry models - in the foreground is a Space Marine in MKIII armour. 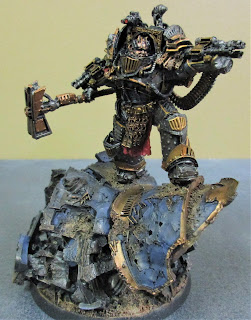 Now on to the big man himself, the Primarch Perturabo. I've actually been finished the model for awhile but figured I'd combine the post with the Iron Circle bots that were just completed over the weekend. 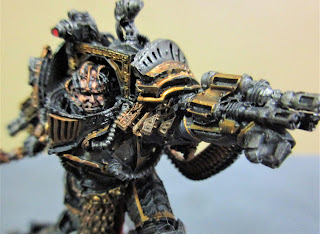 Lots of silver paint on this fellow also. I like the head sculpt but having seen another hobbyist's conversion of Perturabo wearing a helmet, I kind of wish that Forge World had given this as an option. After all, gritty siege specialists don't often run around without head protection. 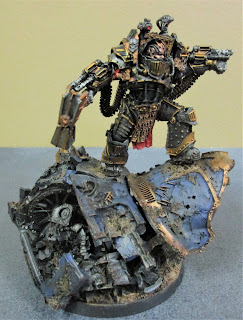 The provided display base is ridiculous and over-the-top, and actually took a little bit of thinking to figure out in terms of assembly. It's completely impractical for any kind of gaming use, of course, which leads to my work shown later in the post. 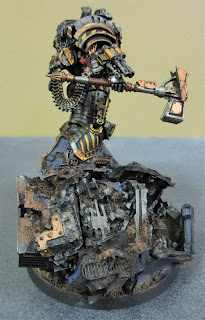 Perturabo can wield Forgebreaker, the massive Thunder Hammer forged by Fulgrim and used by Ferrus Manus (save Ferrus!), primarch of the Iron Hands Legion. The hammer was given to Perturabo by Horus the Warmaster himself, following the death of Ferrus Manus in the Drop-Site Massacre on Isstvan V. 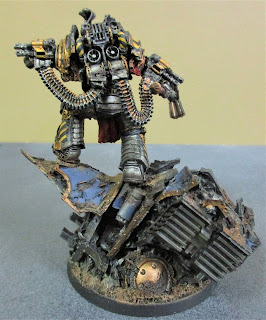 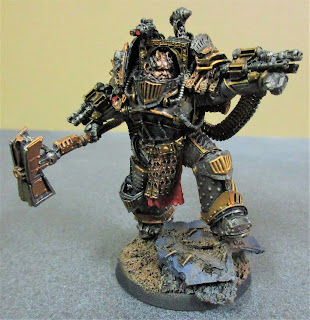 But wait! There's more! As the display base is pretty much unusable for gaming, I rigged up some magnets to base Perturabo on a 40mm base, using one of the parts from the display base as well. The magnets work fine but be mindful of polarity as always! 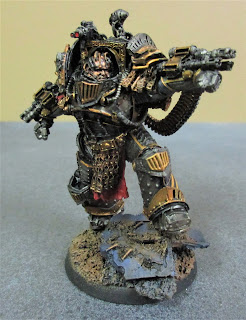 Finally, I magnetised Perturabo's right hand as well, so he can be played without Forgebreaker if desired. Again, all it takes is some small magnets sunk into his wrist and hands.

As Conscript Greg pointed out in a recent text, we seem to be headed for a GIGANTIC Horus Heresy game as soon as this lockdown lets up. I have to say that Perturabo and his Iron Circle Honour Guard were pretty satisfying to paint despite (more likely because of) the limited palette and simple techniques used. They sure look impressive I reckon!

Bravo Dallas, these guys look tough as hell! That's not only some fantastic painting, but top-shelf engineering - working with the cables, the green stuff, and then coming up with magnets that make for bases allowing the Primarch model to actually be useful in a game - all brilliant stuff.

Yes...I'm feeling another HUGE 30k game coming through the warp...just counting how many Legions we could involve in the game if we leverage everyone's collection...we would need to rent a community centre or something, I think...