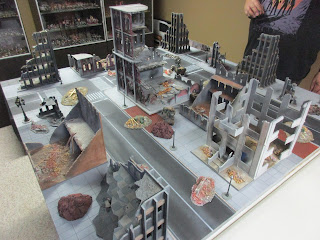 A couple weeks ago I set up our regular Thursday game as a "Cold War Hot" battle pitting Conscript Greg's and my Eureka Soviets in NBC gear (the infamous "Chemical Commies") against my own platoon of Eureka US Army troops in MOPP suits.

For everyone's convenience we decided to use Warlord's "Bolt Action" WW2 rules with some suitable updates for the 1980s. The scenario was pretty straightforward - the Soviets were on the attack, and the Americans were making a last stand in the downtown area of a nameless West German city. 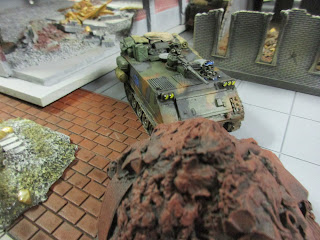 The Americans fielded a small platoon with transports - three M113s from (the now defunct?) Baker Company. 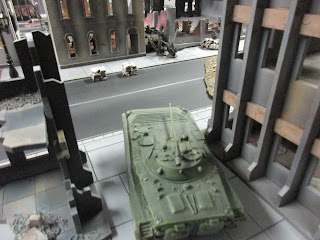 The Soviets attacked with a strong platoon transported in BMP-2 carriers. 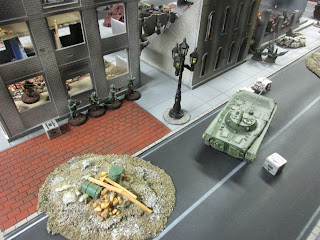 Soviets pushing forward along the street. There was a strong American squad with AT weapons in the building at top right. 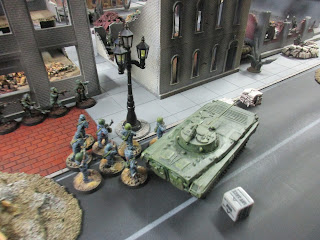 Infantry deploys from their BMP-2. 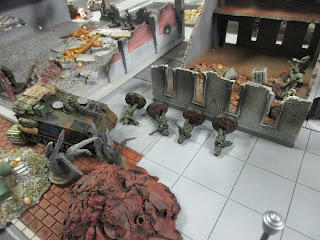 Over on the other flank things are getting hot as the Soviets push through a destroyed apartment block. 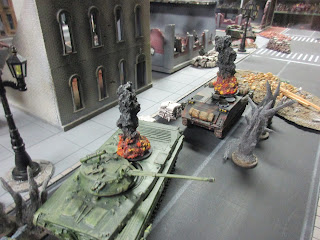 Brewed-up vehicles burn themselves out in the street... 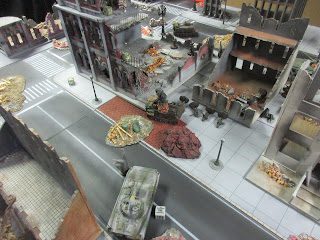 A point blank duel between a BMP-2 and M113 ends as you would imagine it would! 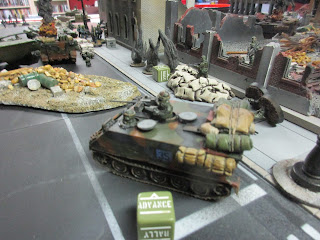 M113 crew thinks twice about driving down the street. 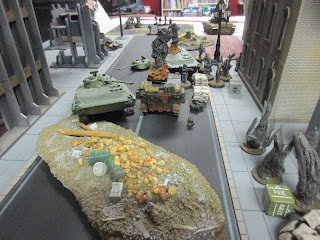 I "think" the Americans managed to hold off the Soviets, this time. However, the thing with Soviets in WW3 is "there's always more where those came from" and any NATO tactical win seems like just staving off the inevitable.

Anyway, we had a lot of fun with this game. Bolt Action works great for an infantry-heavy game no matter what the period, and only took a few minor tweaks to reflect modern weaponry (I should have made the 30mm autocannon on the BMPs hit a bit harder though!). It was certainly a blast to get out the old Chemical Commies and MOPP-suited Yanks for a spin on the table, too.

Sounds really interesting, we just gave it a run through in 15mm recently.
I would be interested in learning more about the tweaks you made as I have my own Modern Russians and thought about using BA for the Chechen war.
Cheers
Stu

This game was a lot of fun, and I do find the latest version of "Bolt Action" to be fun and adaptable.