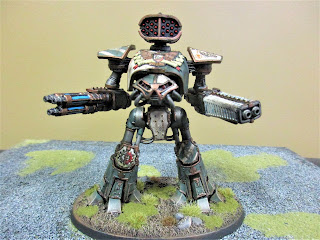 Titan escalation continues! The latest model to be finished is the amazing Reaver battle titan. I just love the look of this model and it's a great addition to the Warhounds and Knights I'd finished previously.

One of the cool things about the Reaver is the variety of weapon loadouts that are now available, and I've taken full advantage of these by magnetizing pretty much everything on the Titan. Shown above are the Apocalypse Missile Launcher, Laser Blaster (right arm) and Melta Cannon (left arm). 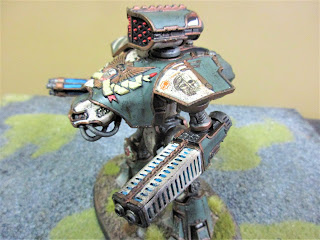 I also used the cool Legio Krytos decals on the titan. I think that I maybe use fewer decals than others in finishing my titans, I dunno. 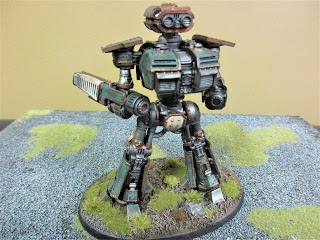 Rear view of the Reaver. I have to say I found some of the assembly a bit tricky, particularly the feet and lower armour plates. Certainly you have to be really careful in ensuring the legs and hips end up at the right angle (level or very slightly inclined forwards) or the torso assembly can look a bit wonky. I screwed it up a bit on this build but corrected it mostly with a very slightly angled magnet on the hip-torso joint. 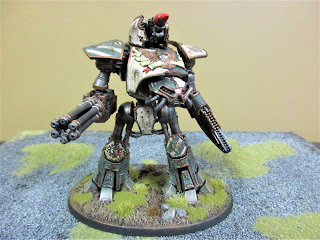 Alternate weapons - Void Missile, Gatling Blaster (right arm), Chainfist (left arm). The Fist comes from the alternate Reaver sprue and the Void Missile is from Forgeworld. The missile itself is also magnetised (with two teeny-tiny magnets) so you can remove the missile from the rack once fired. Cool! 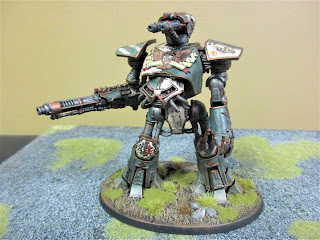 And here we have the Turbo Laser, Volcano Cannon (right arm) and Power Fist (left arm). 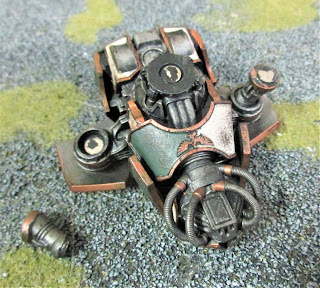 Some detail on the magnetising process. I used 5x1mm magnets here, gluing the right arm into place as it would always have a weapon of some kind - I figured I'd never want to build a Reaver with two melee weapons! I magnetised both ends of the left arm, so I can use a ranged weapon there as well, if I want. Gotta thank Conscript Greg for coming to my rescue with an emergency magnet resupply as I'd run out in the middle of assembling the model... I think I used 17 magnets altogether. 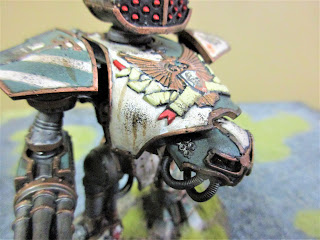 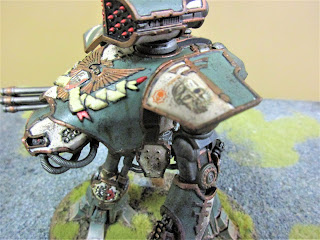 Some more detail of the weathering. 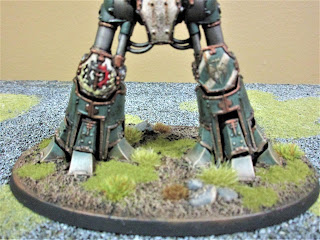 Sorry for the blurry pic - just wanted to show the decal on the left knee. 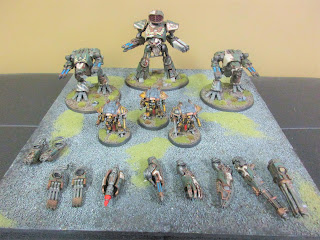 Here's the battlegroup so far - Reaver, two Warhounds, and three Knights. Next up will be the two Warlords I've not yet assembled, as I'm waiting for the box of 100 5x1mm magnets to arrive!
Posted by Dallas at 11:31 AM

Oh my goodness, look at the size of the beast! Fantastic work.

Fantastic! Love the family shot with all the parts. :)

Outstanding work Dallas! The painting is great, but so is the hobby engineering! I am inspired to try and attempt an "all-option" magnetized Reaver, and see if we can make that work...

Thanks for the comments fellas!

They look fabulous, Dal! Love the green and cream combo.