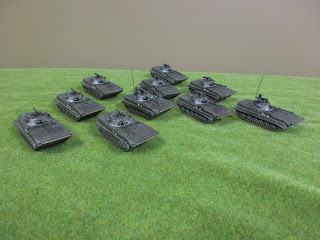 Another update in Team Yankee escalation - this time on the Soviet side for me, as I finish up my Soviet Opfor to use against my British and Bundeswehr Bunch (tm). 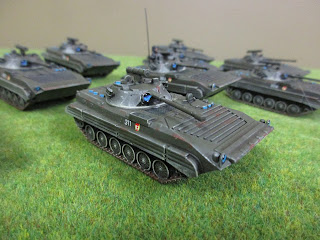 Last time the update was massive, covering my Hinds, Acacias, Shilkas and Motor Rifle company. As alluded to in that post, this one will add the "motors"... 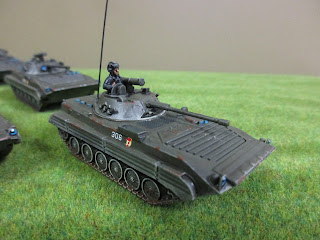 These are BMP-2s from Battlefront - two boxes worth. The BMP set comes with hulls and turrets to build either -1s or -2s and I opted for the latter, mainly because of their somewhat better in-game stats and concomitantly higher points cost. This can be important because of the disparity between points values for most Soviet vs. NATO stuff (USA, GB and West Germany anyway) - those sexy tanks are expensive and you need a lot of Soviet stuff to balance that. 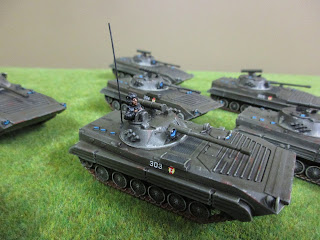 The BMPs are all injection-molded plastic kits and are very well designed and easy to build. My only gripe is with the tiny searchlight as it is easily broken. 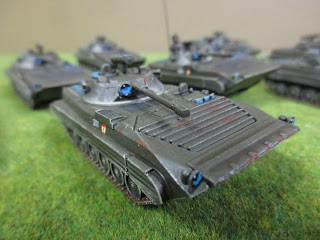 Such a sleek-looking APC - you know this was a trend-setter among the world's armed forces. Building two boxes (10 models) when combined with the two I built from the Yuri's Wolves set gives me 12 - enough to outfit the Motor Rifle Company. Sorted! 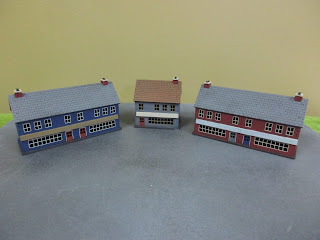 A project of an evening this week was painting these Shops from TTCombat's 15mm "World War" MDF scenery range. 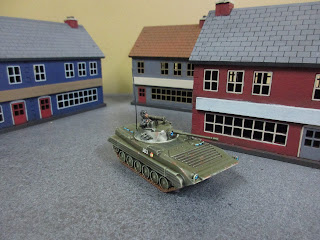 I really can't praise these models highly enough. They look great, are easy to build and paint, and are inexpensive to boot. Compare the cost of your favourite resin or pre-painted buildings from MBA or Battlefront to these... it's only 8GBP and change for what you see here :-) 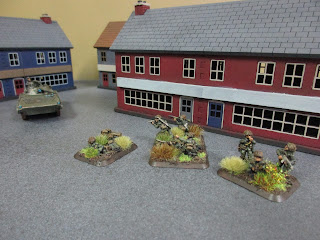 Scale looks good with these Bundeswehr troops defending their town. 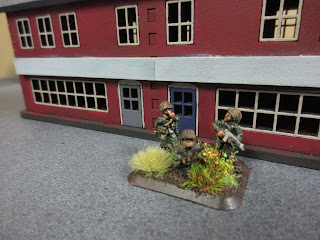 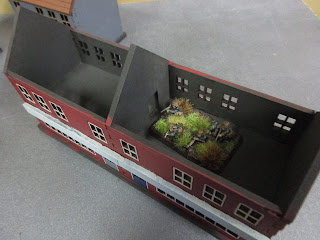 The buildings all have removable roofs and constructed second floors as well for easy model placement inside. I did a pretty basic paintjob on these and I expect they will do yeoman's work on our Team Yankee tables for a long time to come.

TTCombat are a great bunch - I emailed them with a compliment on including chimneys with these models (the Townhouses I have from them don't include chimneys and that's a bit of an oversight) and I quickly got a message back saying that they'll be adding chimneys to future cuts of the Townhouses. Can't ask fairer than that!
Posted by Dallas at 9:57 AM

The buildings do look good for the money!

Tidy. Very tidy. Particularly the enviable lens work! :-) Those buildings look good, but maybe a thin black/ brown wash and a light bone drybrush to bring out the detail? Like the removable roofs too.

Thanks fellas! @James... yes, I might go over with a wash. I did that with the Townhouses I'd painted from the same range but wasn't completely sold on the effect. Something about the texture of the MDF material changes the effect a bit.

Great work Dallas! Can’t wait to see those motor rifles in their first game, now that they have rides :-)

And shooting up those buildings will be fun, when we plan another struggle for a critical McPizza King location...

@Dallas - fair play, never worked with MDF myself so not sure how it responds to paint. Happy 10th birthday by the way! ;-)

Thanks James - hadn't even noticed that!!