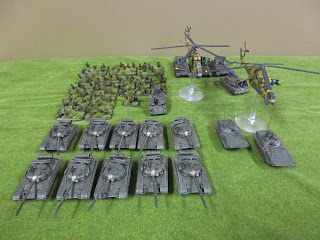 Unfortunately my painting (as well as blog posting) hit a bit of a dry spell over the summer, but I'm trying to make an effort to turn that around. This starts with picking up a paint brush. This week I've finished some models for my Team Yankee Soviet forces that I wanted to post. Conscript Greg has more Soviets than we'd ever use in one game, but already having painted West Germans and British, I wanted to have a small "opfor" that could ally with Greg's in a large game, or that could even stand for itself if Greg's models aren't available. I started with the excellent Yuri's Wolves boxed set and have continued from there... 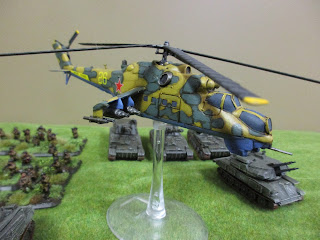 I picked up two Hind attack helicopters, just because Hinds! The Battlefront models are awesome of course and embody the extreme menace of these Soviet death machines! 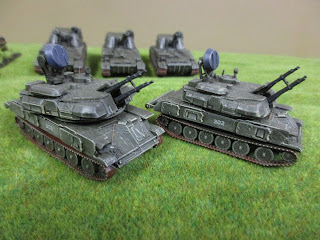 The anti-aircraft defence role for the battalion is filled by two ZSU23-4 "Shilka" vehicles. These models aren't from Battlefront but are some excellent and inexpensive models from Zvezda. It's somewhat fiddly to assemble the guns, but other than that the kits are great, and represent excellent value for money, especially when compared with Battlefront's premium pricing. 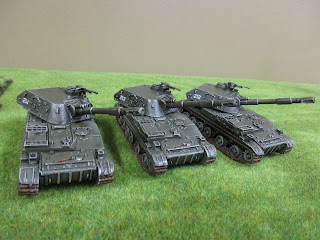 The latest addition is a battery of 2S3 "Acacia" 152mm SP guns. I'm a sucker for SP artillery and knew I wanted to add either these or the smaller "Carnations"... the sheer size of the pieces, plus the availability of special "Krasnopol" ammunition tilted the choice in favour of the 2S3s. 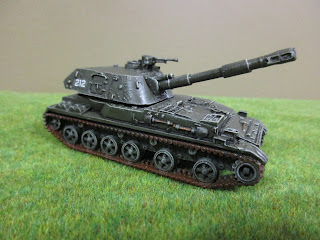 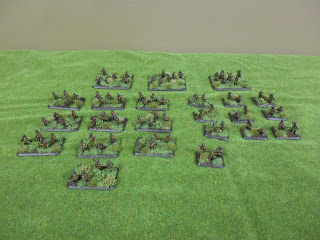 Of course the big hump to get over when painting the battalion was getting the infantry company done. Awhile back I'd bought Battlefront's "Motor Rifle Company" pack to paint. These are really nifty models. They come on sprues and are made of semi-hard plastic. Downside is that they can be slightly bendy, but this is outweighed in my mind by the fact that they require NO cleanup, they're lightweight, and they are relatively inexpensive. You get enough figures in the pack to make a whole Motor Rifle Company with attached AA, plus a significant number of extra figures - the Company is 79 figures but I reckon you get nearly 90 in the box. 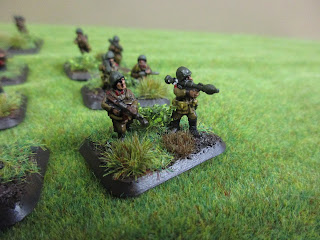 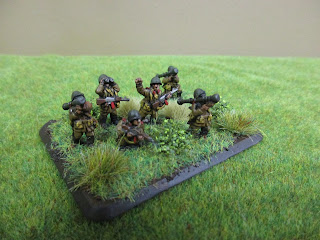 A large base with the attached SA-14 "Gremlin" AA missile team. 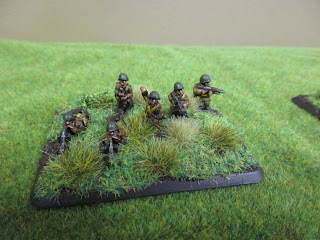 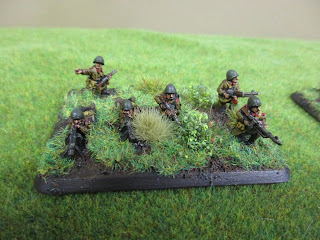 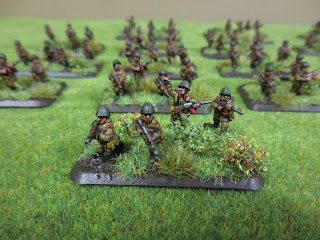 Ten AK-74 assault rifle teams make up the bulk of the company. 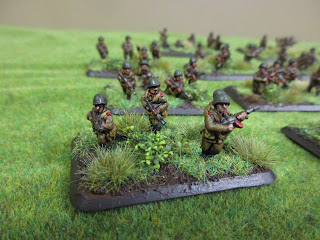 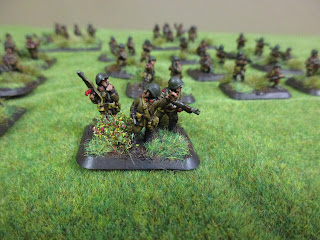 Plus the battalion commander brandishing his pistol of course!

The infantry received a basic paint job as I really wanted to just get them done. The base uniform colour is GW XV-88 (ugh) with web gear highlighted Zamesi Desert. Helmets and ordnance is Catachan Green. Rifle furniture is Mournfang Brown. Skintone is Cadian Flesh. After the basecoating the whole model was washed with Agrax Earthshade.

The models were glued to popsicle sticks for painting and once completed, were superglued to the supplied bases. I really like how Battlefront now mold their bases with holes to accommodate the round figure bases, making it much easier to position the figures and do the groundwork on the base.

Of course, being that these are "motor rifle" troops they do require "motors"! I picked up two boxes of BMPs last weekend on a Black Friday trip to the States and that should give me just enough, when added to the two I've already done up. After that, another five T-64s (also Black Friday booty) should pretty much finish up the battalion.

Fantastic work dude. Always great to have more Soviets! Love the Hinds...can now combine to have four of them stalking the table!

Nice painting...very nicely done, the bases look really good on your Mot Inf...I may borrow that as mine still have no ground to sit on...Cheers.

@Stanley Martens... the key to my basing is definitely tufts!! Easy to use and look great!