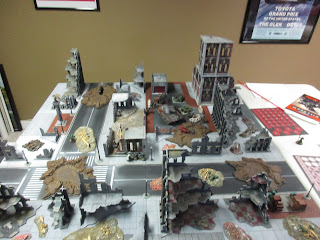 A couple Thursdays back we decided to dust off the Heresy armies for a game of GW's new opus, Kill Team. For those who've been living under a rock, KT lets players field real skirmish forces of 3-20 models and is a skosh more detailed in its gameplay than 40K. In truth, it's meant to be a gateway drug for new players... collect and paint a Kill Team and you're on the way to having a 40K army, or something like that... Of course, for grognards like us, Kill Team is more a matter of picking out some models from the 10-or-more 40K armies we already have, and playing a game with those. Not much danger of KT escalation hereabouts.

Anyway, Conscript Greg and I ended up picking very similar Kill Teams - his, Sons of Horus and mine, Iron Warriors. The scenario involved a very lost Herald of the Warmaster who needed to be picked up and "protected". 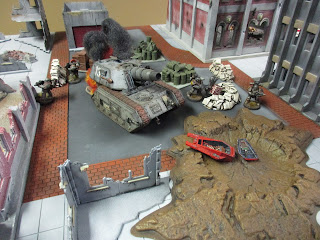 I laid out a congested urban table 4 feet square. We deployed in opposite corners. Four markers were placed near the centre of the table as possible locations for the Herald. The Kill Teams were tasked with finding the Herald and escorting him off the table. Above you can see some of the initial Iron Warriors deployment. We also placed a Marine with Missile Launcher on the third storey of the red-brick building at upper right. 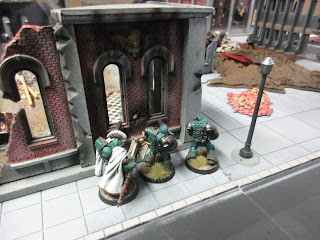 Sons of Horus deployed on the street ready to rush the objective markers/tune up Iron Warriors... 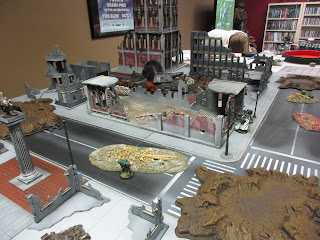 View from the SoH side. IW missile dude is in the building at centre top. 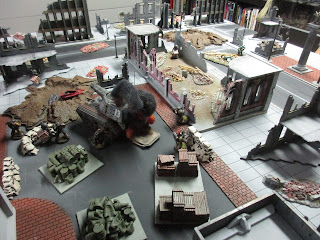 The battlefield as seen through the sights of an IW missile launcher. 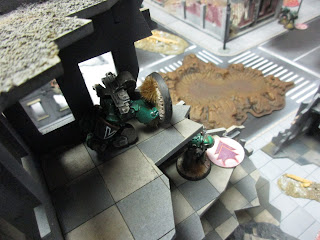 The first turn saw the ML score a counter-sniper hit on SoH heavy weapons Marine hidden in building behind their lines. 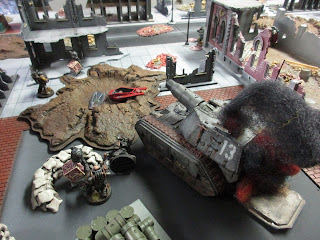 Iron Warriors rush to check markers in no-man's-land. Unfortunately for them the SoH had set up in overwatch and after a furious gun battle the Iron Warriors were down! 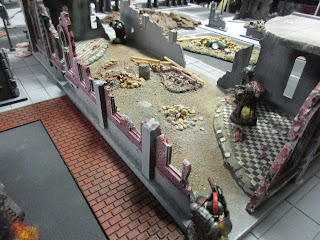 The other three markers having been confirmed as duds, the remaining Iron Warriors close in on the confirmed location of the Herald. SoH Marines are all around - on overwatch at top centre and out of sight by the wall at centre left and behind the building at centre right. 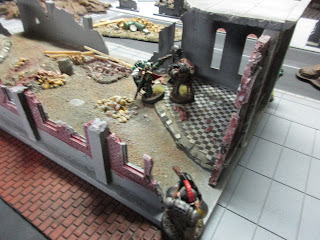 SoH boss closes on the objective, with a minion just behind the building in support. IW trooper did not live long but help was on the way! 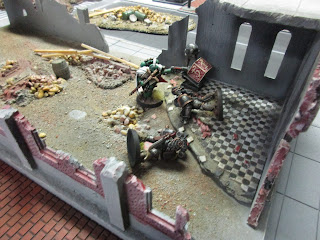 Oooof... that didn't work either as the SoH boss took out the "help"... 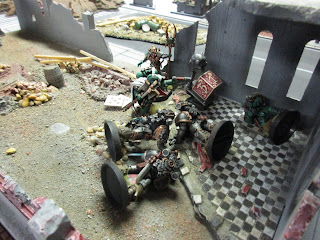 Never fear, here comes the IW boss... but the SoH leader took him out too. 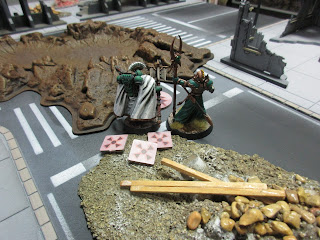 Sons of Horus escape with the Herald in tow!

That was a fun game with a real ebb and flow of fortune. With only 6 models per side, taking out one or two models really makes a difference! Note the "flesh wounds" being carried by the SoH boss in the pic above... I got pretty unlucky with Greg's wounding rolls but them's the breaks! I really enjoy Kill Team as a skirmish game as the departure from strict IGO-UGO is really fun.
Posted by Dallas at 12:21 PM

Yeah, you really feel those losses in Kill Team with lower numbers. I played my Imperial guard against some Drukhari a while back and my kill team had 18 versus their nine... so when both sides lose 3 in the first team, it's a little alarming for the Drukhari because it looks like they've been gutted and I'm still swarming the table...

Mind you around turn three when they all start hitting on 2+ in melee it all starts to go downhill for the guard...