A couple weeks back, as we always do, we had a big game to commemorate Remembrance Day. This year's game saw a return to the mud of Passchendaele and the battle that raged 99 years ago nearly to the day.

The particular part of the battle we re-created was the assault of No.1 and No.3 Companies of the Princess Patricia's Canadian Light Infantry up Bellevue Spur to Meetscheele Ridge and the village of Meetscheele. The Ridge was fortified with machineguns and pillboxes, and is represented on the table by the round raised hill at lower centre of the picture above. The village is just above it to the left, with ruined church and several buildings. The objective of the PPCLI is to take one of three objectives: the church, pillbox no.1 on the ridge, or pillbox no.2 on the ridge. 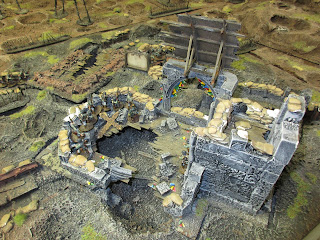 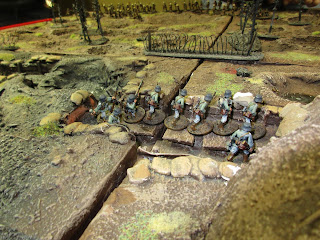 Germans occupying a trench just to the left of the Ridge. PPCLI seen at top. 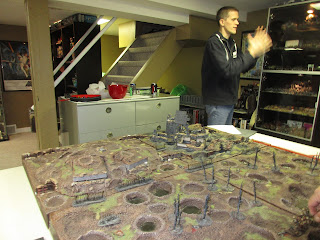 Conscript Mike explaining the finer points of the German defence... Pillboxes clearly visible at the front of Meetscheele Ridge.

The German defenders consisted of a three-platoon company and two machineguns. The PPCLI attacked with two companies - each of three platoons - three machineguns from the MG Company, accompanied by future VC winner Lt. Mackenzie, and one 18-pounder field gun. The battalion command section included the OC himself, Lt.-Col. Agar "Ever Thine" Adamson. Notably, No.3 Company was commanded by Acting Major Talbot Papineau, a personage of some distinction, touted as a future prime minister of Canada... who was later played in a CBC production by actual future prime minister Justin Trudeau (!)

Papineau went over the top with the men of No.3 Company at 5:53am. Just prior, he spoke his last recorded words to Major Hugh Niven: "You know, Hughie, this is suicide." 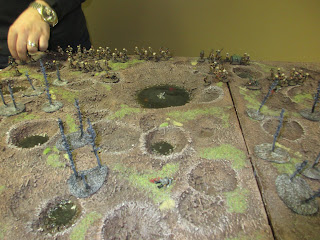 The Canadians have gone over the top and are working their way across no-man's-land. The terrain of Passchendaele was described as a hellscape of mud and fetid water-filled shell craters and I think that comes across. 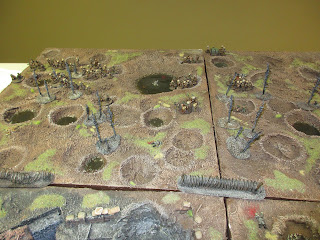 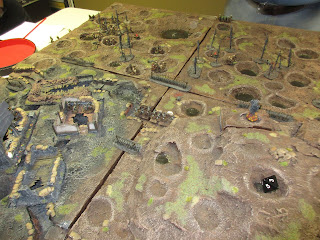 We used the Warhammer Historical "Great War" rules, as usual. This ruleset allows a saving throw of "6" for troops in a skirmish line where each model is at least 1" apart, but owing to the nature of the terrain, this was often not possible. fairly fitting I reckon. 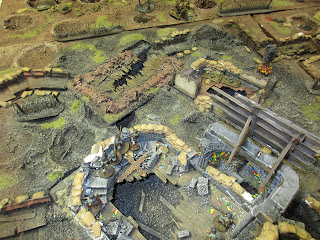 As the game began to draw near its turn limit, the Canadians had made it to the village, where a few doughty Germans hung on... 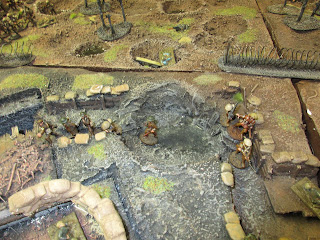 The PPCLI used the cover of basements and trenches to approach for the final assault. 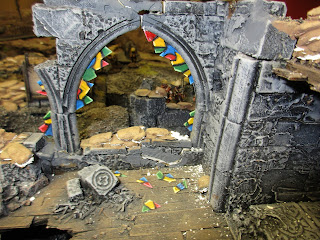 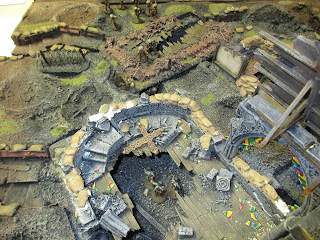 But in the end, time ran out for the PPCLI as a few Germans remained to contest the objective.

All in all, a bloody slaughter, as it should be, I suppose. It's always fun to amortize the trench table and I think a 4x4 layout was just about right for this game. Thanks to the guys for coming out to play, I hope you had fun, I sure did!
Posted by Dallas at 10:01 AM

This was a fantastic game Dallas - thanks again for hosting and running the game!