Fellow Conscript David Violago decided to run a Necromunda campaign a little while ago (well, too long ago really and I have been slacking) and I wanted to get into it and play some games in it.  However I did not want to use one of my old gangs so I looked around for a new gang to play.

What I found that I really liked was a bunch of figures by a company called Raging Heroes called the Jail Birds.  In my mind these worked perfectly as a gang for Escher.

Anyway, they took far too long to get done, and I still have a few more in the works, but I have finally started getting some games in with both David and Mike.

My leader is sporting a sniper rifle (counting as a Bolt Rifle for game purposes), Mickey Mouse ears, and sucking on a lolly pop, 'cause why not.... 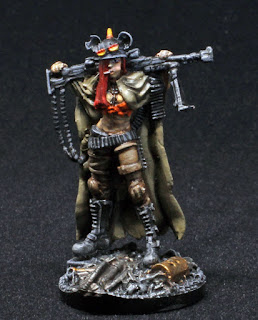 My two heavies, one with a flamer and the other with a grenade launcher. 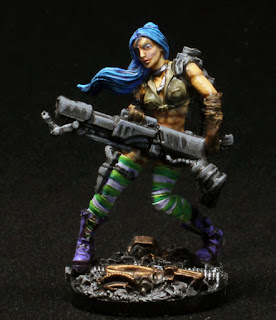 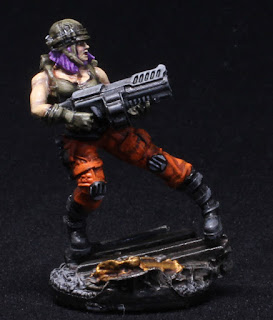 Next up are my gangers, a bunch of them with autoguns, lasguns, and some with pistols and swords. There are some issues with the pictures though as I just could not get the colours to match in the images and real life, something I really have to work on correcting.  I even have a lightbox and a good camera, I just can't make it work correctly. 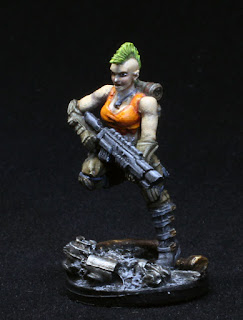 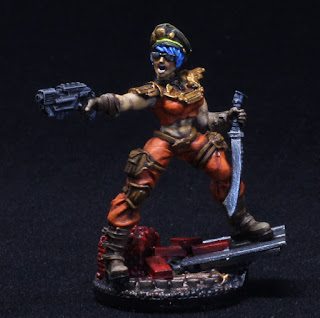 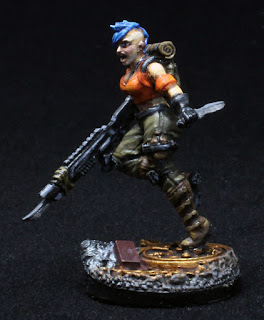 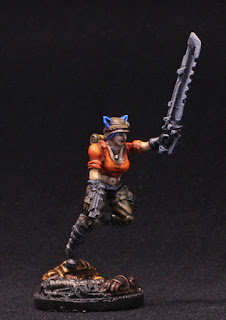 Lastly and some of my favourite figures are the Juves.  They are literally little girls with pets and guns.  Almost all of the figures have little pets or stuffed animals with them, and carry guns 2x their own size.  Since the guns are so huge and they are little, I count them as auto pistols, to symbolize the reduced accuracy of a big gun in little hands. 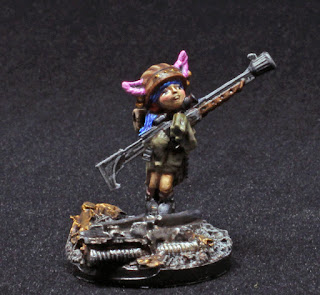 I tried to base all of them on urban rubble of some kind to fit into the Necromuda universe.

Now to get more games in!

Wow! These are absolutely stunning!

The sculpt are incredible, and your painting skills rally make them pop out!
I really struggle with female skin painting, would you be kind to share how you handle this aspect of painting?

@MajorTheRed - The skin really does not show up well in the photos, it is much better in person. As to how to paint it, each is a separate skin tone (the shotgun is an asian skintone, the one with the hat is a mexican skin tone, etc) so I have to go in general here.

I start with a dark flesh base (vallejo almost chocolate brown), then mix 1/2 with a lighter tone (vallejo basic flesh) and paint all but the crevasse and edges. Then repeat with just the lighter tone. I then go back and wash it all with a flesh wash (P3). Then start adding in the lighter colour again, then add in some rose colours on cheeks and lips. Finally I work back down with some darker shades or washed in any shadow areas that got too bright.

The most important part is EVERYTHING other than the initial colour needs to be cut at least down to 1/2 paint or less with glazing medium, and many times thinned down to 1/4 or less paint. Then use 3-4 thin layers. This gets rid of edges and allows subtle shading differences.

Again though, the pictures suck for showing this, I think only the Juve with the pig and the flamer show up at all well.

I am not great with flesh tones though, so take everything I say with a grain of salt. I keep trying to learn. A great place to check out for some tutorials is the Kingdom Death site (as the figs have a lot of flesh showing) as they have some excellent tutorials.

Definitely works as an Escher gang!

Lovely figures, really like the bright colours you have used as a contrast to the khakis and combats shades.

Look fabulous I hope they have fame and fortune in the underhive!

Lovely work, Byron! Really evocative of the faction. And I like the little mascots a lot.