With all of the Team Yankee fighting going on at the club, I decided I wanted to jump in as well.  However, being my normal difficult / contrary self, I had to do something a little different.

I really like the Team Yankee rules, as they are essentially FoW but with smaller forces (which is where the rules work better!), but have some visual issues with them.  While the 15mm models are amazing and highly detailed (I own some), I have serious issues with the scale.

Let me run you through some numbers that lead to my issues with the rules:

SEE THE ISSUE I HAVE???  Most of you probably do, while Conscript Greg probably threw his hands in the air and is ranting about math and games not belonging in the same universe together!

Therefore, I went to 6mm, where an M1 is roughly 1" and if we keep the same 40" range, we get a ratio of 1:40 which, while still far below real life, at least looks and feels far better on the table (at least in my mind).

So, onto the show and tell, and despite using the US main battle tank in my example above, I am going to show off my Russian force today. 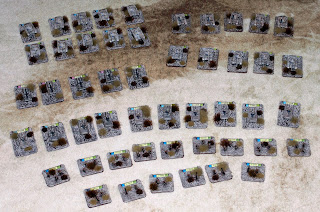 All the figure are either CinC or GHQ figures.  They are painted to be used with Team Yankee as desert war or as USA vs Iraq war.  Early on I decided that since Greg was doing European theater cold war gone hot stuff, I would do something different and focus on desert colours.  This lets us do either Team Yankee cold war gone hot battles, or Desert Storm battles. 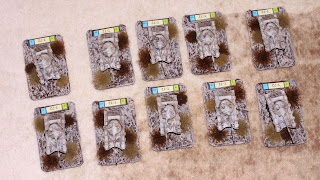 I know some pure historical games are cringing at that last statement, but tough....  I know that Dessert Storm had some different vehicles and that this is somewhat inaccurate, but many of the same vehicles were used, so for a game we can stretch it a bit. While I like historical battles, I am not caught up on exact recreation. I have no real need to worry about which version of which gun was at which battle, I really don't care.  If the figs are well painted, and reasonable resemble something, then all I care about is the game itself.  Is it fun and plays well, Awesome!  I took that view for this so that we could do fun games based in the Team Yankee "world" and use their rules, but stretch it to other areas a bit. 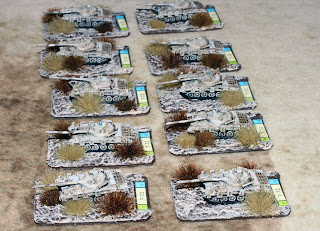 The Russian force I have started here has 20 T-72's, 10 BMP-1's, 5 BMP-2's, and a pile of infantry.  I followed the Team Yankee force creation rules so that it is valid for the game.
I based all of the vehicles and infantry to force some separation between them.  Having learned from Greg, it really bugs me when I see tanks parked side by side on a table.  with the bases being about twice the width of the vehicles here, even if you put the bases next to each other it would still look OK and represent at least 10-15' in real life between them (which is still too close, but better than some nimrods that park 15mm FoW tanks touching each other).

All of the bases were 3d printed to have lips around an area at the back to drop labels into for easy identification (in theory).  6mm is sometimes hard to tell apart at a distance, so having seen many people online use labels similar to these I decided to copy the idea.  Each label has three sections: Unit type (Tank, Infantry, Transport, etc), Description (T-72, M1, etc), and a unit number/colour (so if there are 5 T-72's in a unit but I have 2 units, there is a blue shaded 1-5 and a green shaded 1-5 to tell them apart). 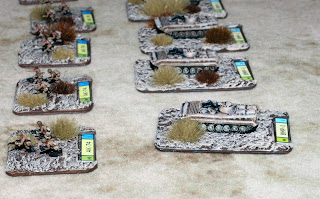 I loved painting these up as they are so insanely fast and easy to do.  Even though I was pretty fast and sloppy with painting them, at table top they look really good!  I am really starting to see the appeal of 6mm!

Still to do with the Russians is some aircraft, helicopters, and some artillery and anti-air firepower.  Coming soon!

Great work on these figures Byron! 6mm is a wonderful size to embrace modern conflicts. The "hub to hub" effect of tanks can certainly be jarring in a 15mm game, although I do love the 15mm figures and models. For all the wonders of the range of modern weapons, however, I believe it is quite viable to have very short-range encounters between armoured formations in the "Team Yankee" scenario - with fog-of-war etc those paper ranges can be short very fast...keep in mind the engagement ranges you mention were for "Desert Storm" which was, well, in the desert...

All that said, I think your project is brilliant! I'm looking forward to getting these fellows out on to the table, and this is inspiring me to crank out a bit more 6mm stuff myself!