More Epic 30k material for my fifth submission to Curt's Analogue Hobbies Painting Challenge - a mix of vehicles, ranging from APCs to some super-heavy tanks - most of which were in action at Dallas' place last week.

Up first are two more Rhino APCs from the XIV Legion, the "Death Guard". They missed the deadline for the last batch, so I tucked them in with this submission. These two models are old, original plastics from the 90s...I'm still always impressed at how well the detail has held up on these little guys. 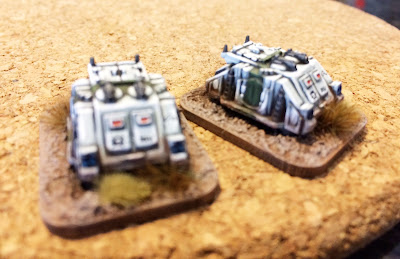 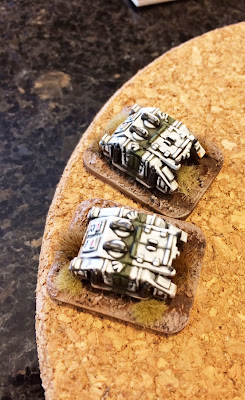 Getting a little heavier, three Land Raiders, the "Proteus" variant, from the VII Legion, the "Imperial Fists". These tanks are the mainstays of any Space Marine armoured force - hitting hard while carrying troops in (relative) safety. 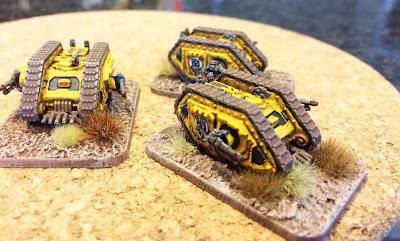 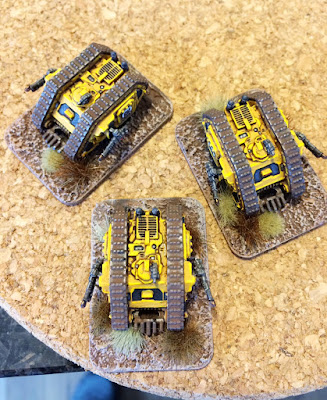 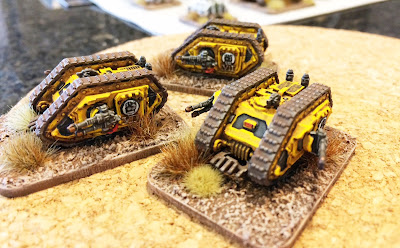 Up next is a battery of Whirlwind tanks - "Scorpius" pattern. There is one battery for the Imperial Fists. 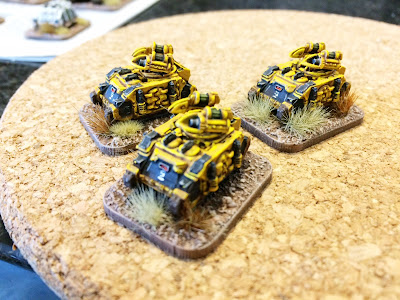 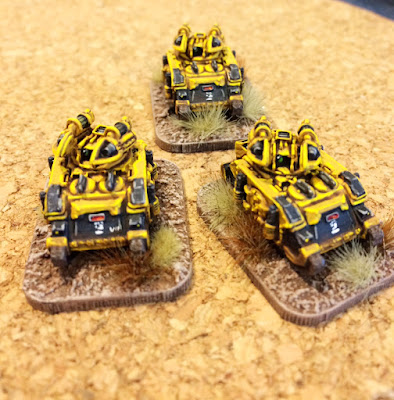 And another Whirlwind battery, this one for the XVI Legion, the "Sons of Horus". 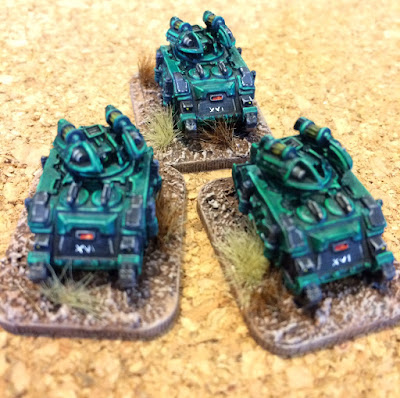 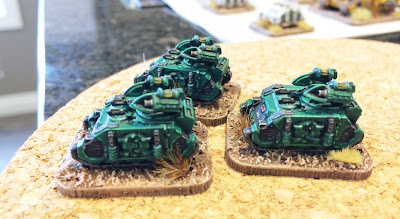 Now we move up to some super-heavy tanks.  This is a Cerberus Heavy Tank Destroyer, a sort of Jagdtiger of the Space Marine Legions.  This is a very heavy, scary laser array mounted on an extra-large and extra-armoured Land Raider chassis.  Fitting for the setting, the weapon can have serious side effects on its own vehicle...but I'm sure those are "isolated incidents", right? 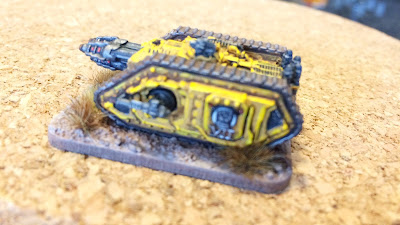 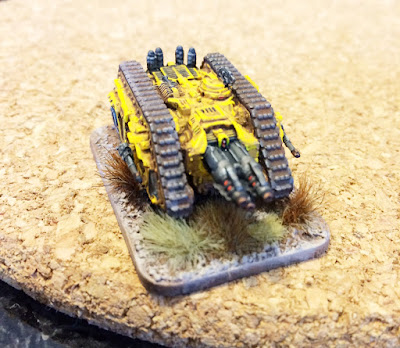 The scariest is saved for last.  Getting run over by Land Raiders, hit by rockets from Whilrwinds and zapped by the Cerberus is bad enough - but when a Space Marine Legion commander is really mad, he sends a few of these things forward - Fellblade super-heavy tanks.  Armed and armoured to end-of-days levels, these thing obliterate the enemy at any range. 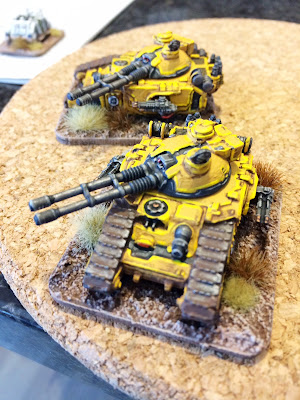 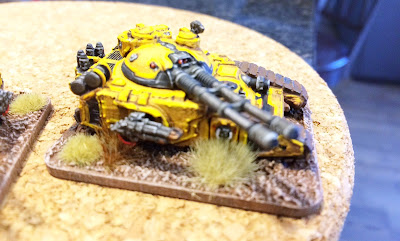 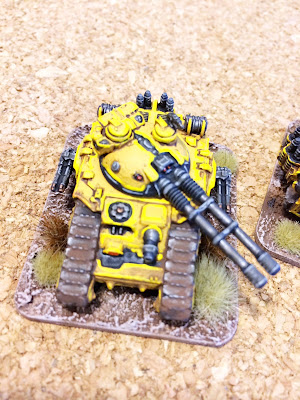 I have a lot more Epic stuff in the pending line for my painting desk, but now that I'm choking on the dust of others in my Painting Challenge side duels, it's time to crank the scale-o-meter back to 28mm, I think...hopefully will have some of that to share next week!
Posted by Greg B at 9:24 AM

Love those. I might just have to start an Epic collection soon...

btw, where do you get your bases?

Thanks Iannick. The bases are from Warbases. Infantry units and vehicles up to the size of Rhinos are mounted on a base of the same dimensions as the Flames of War "small" base (which I think might be 1" x 0.5", but double check that). The larger vehicles are on custom ordered sizes or varying sorts.

Excellent painting here.
I'm still looking for for these non-commercial models for my two Epic 30K armies. If You can help, please contact me at arturpendragon71@gmail.com

The Bad Moon Yellow scheme on these is incredible. Really eye catching! Not that the green and white ones aren't also nice :D

I'm also looking for those epic 30k models, I would love it if you could you email me at cedinacore@gmail.com with more detail of how to get them.

These look absolutely great. I love the 30k models you have here. Even the Land Raiders look different from the ones I have found and are sitting in Dettol at the moment! Where did you get these from especially the Fellblades, they look awesome!
As some others have said above it would be great if you could let me know:simonwhitley@hotmail.co.uk.

I would be eternally grateful.