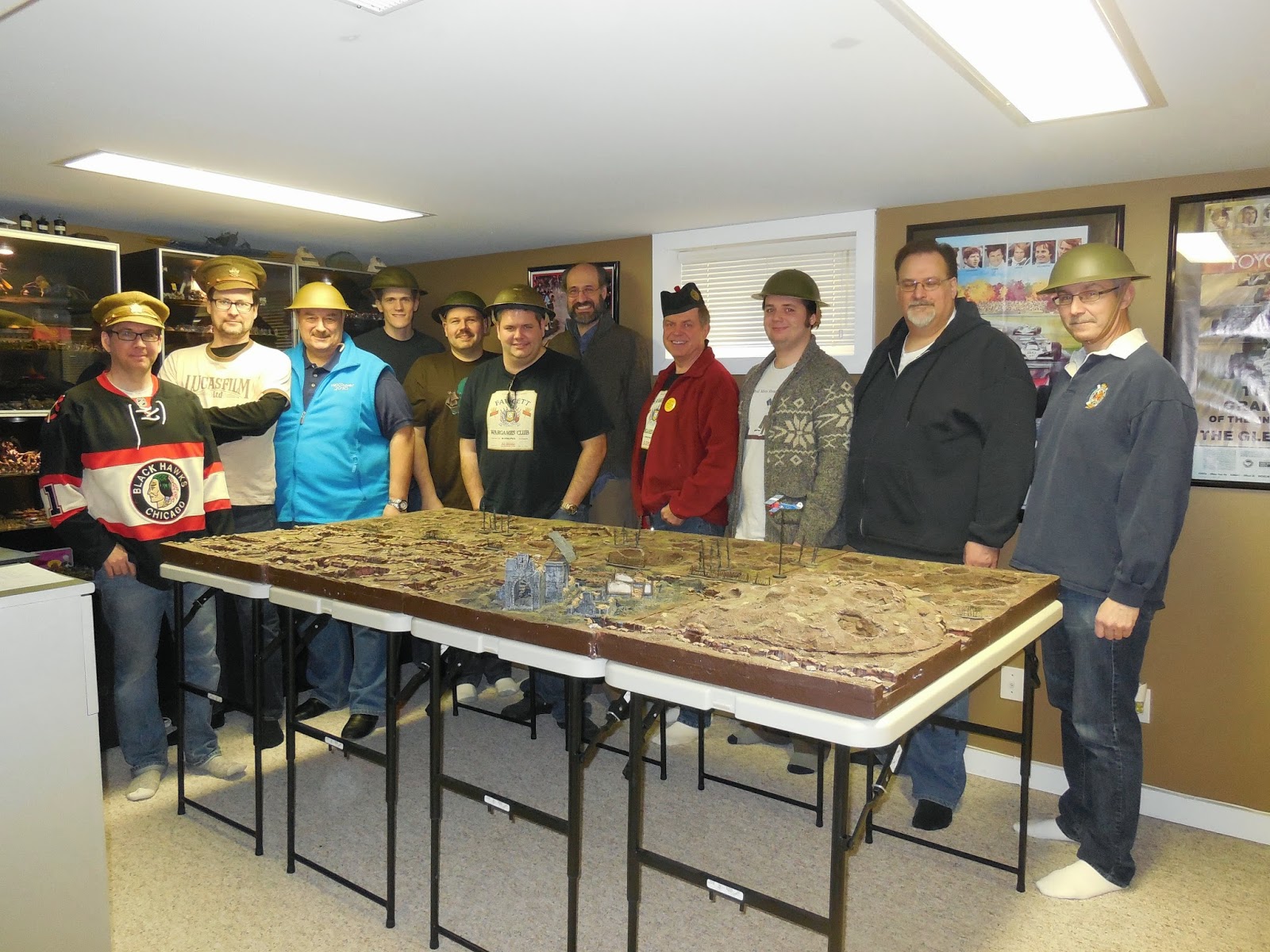 Yesterday, I hosted the annual New Year's Day Game and Lunch Extravaganza. We had a great turnout of Conscripts for the lunch and game - from left to right - yours truly, Conscripts John, Bill, Mike F., Byron, Greg, Brian, Frederick, Keegan, Kevin, and Hugh. Since the game will be set in the Great War, we're outfitted for the photo with some appropriate period headgear courtesy mostly of Conscript Frederick. 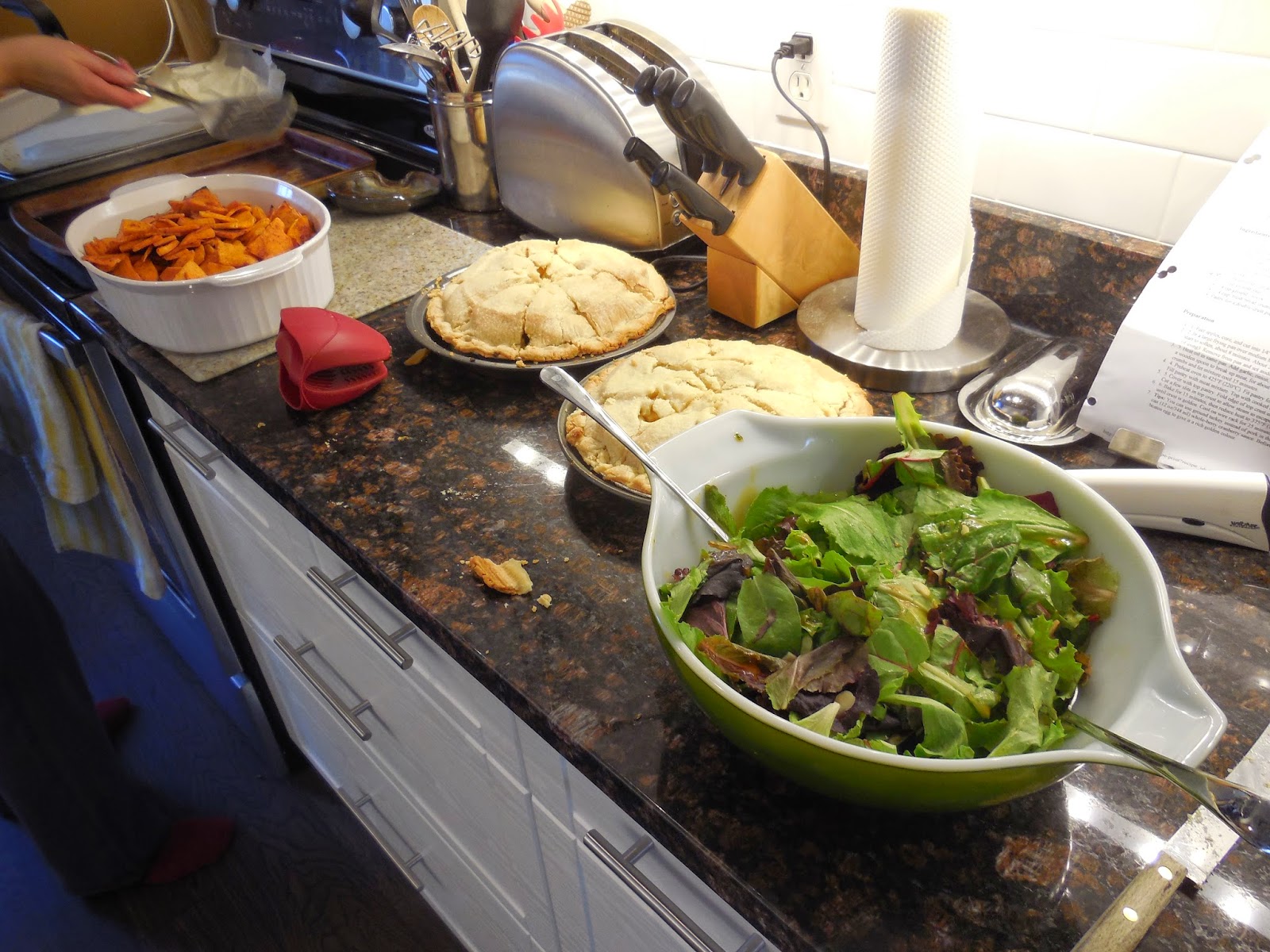 Of course, before the game we have to eat... Pam laid on a very nice spread of pork-and-apple pie, yam fries with cinnamon, and an orange vinaigrette salad. Carrot cake and dainties for dessert, too (thanks to Conscript Byron for the latter), with everything washed down with soda, and Rolling Rock beer courtesy of Conscript Mike. 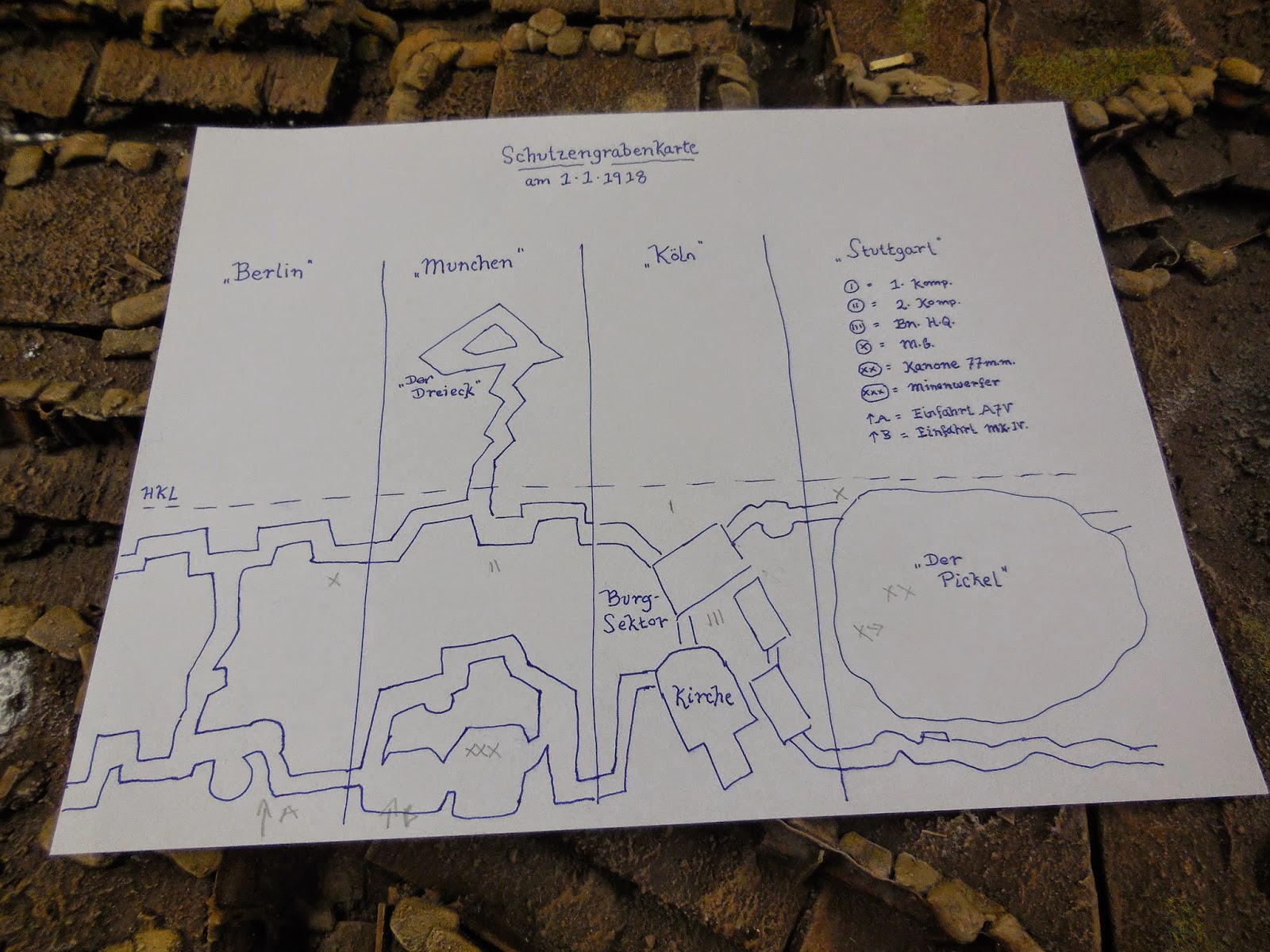 The scenario was pretty straightforward - The Big Push. The Germans deployed using the trench map shown above, while British infantry and tanks attack frontally with a cavalry squadron ready to exploit the breakthrough (!) 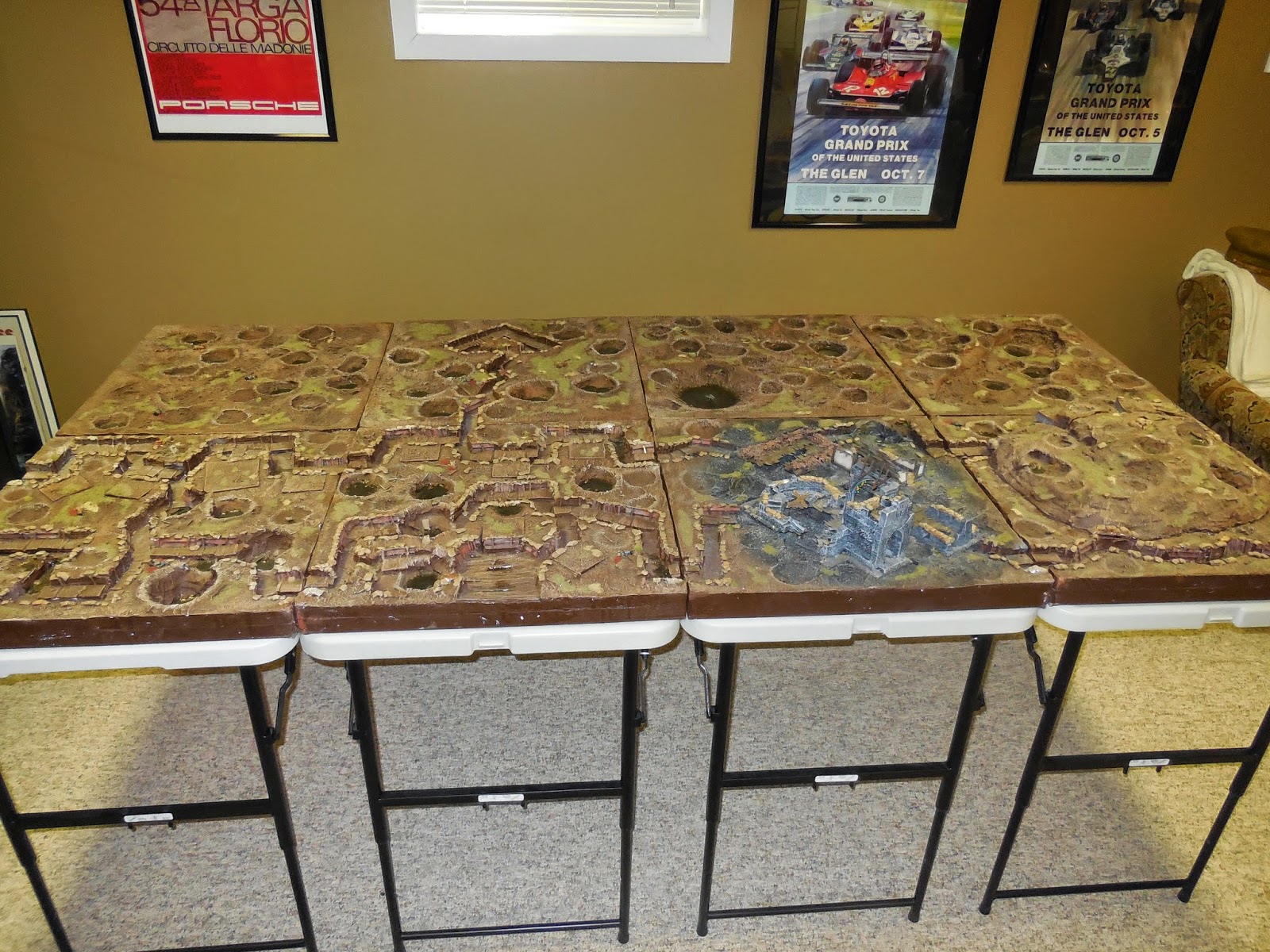 Here's the ground to be fought over. I'm reminded of that scene in "Blackadder" where General Melchett tries to cheer up George by showing him a sand table at his HQ representing the ground captured in the last advance... George asks what scale it is and Melchett replies, "it's actual size." 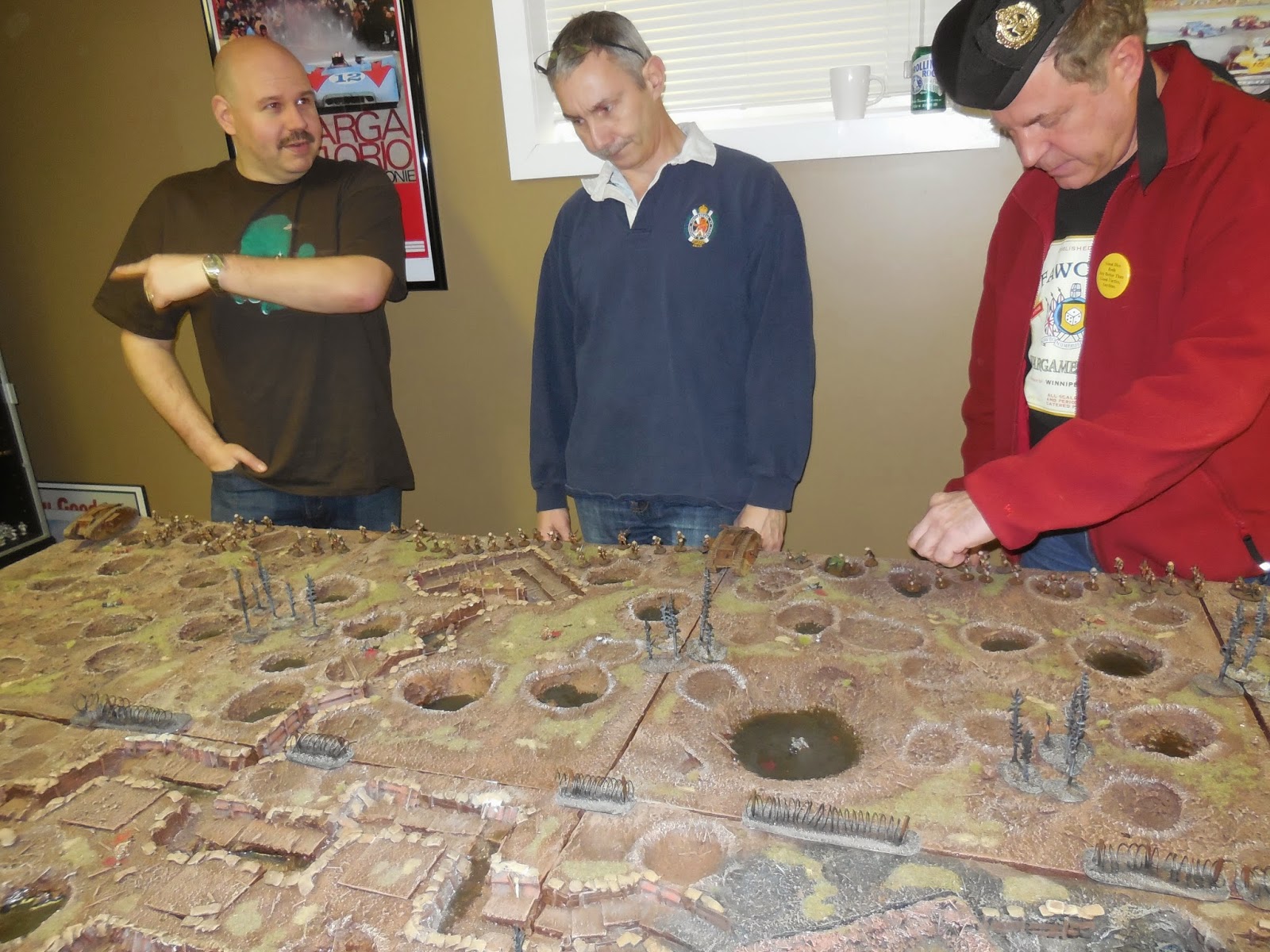 The British deploy as Conscript Byron suggests a flanking maneuver? Sorry Byron, it's the Great War, frontal assaults only ;-) 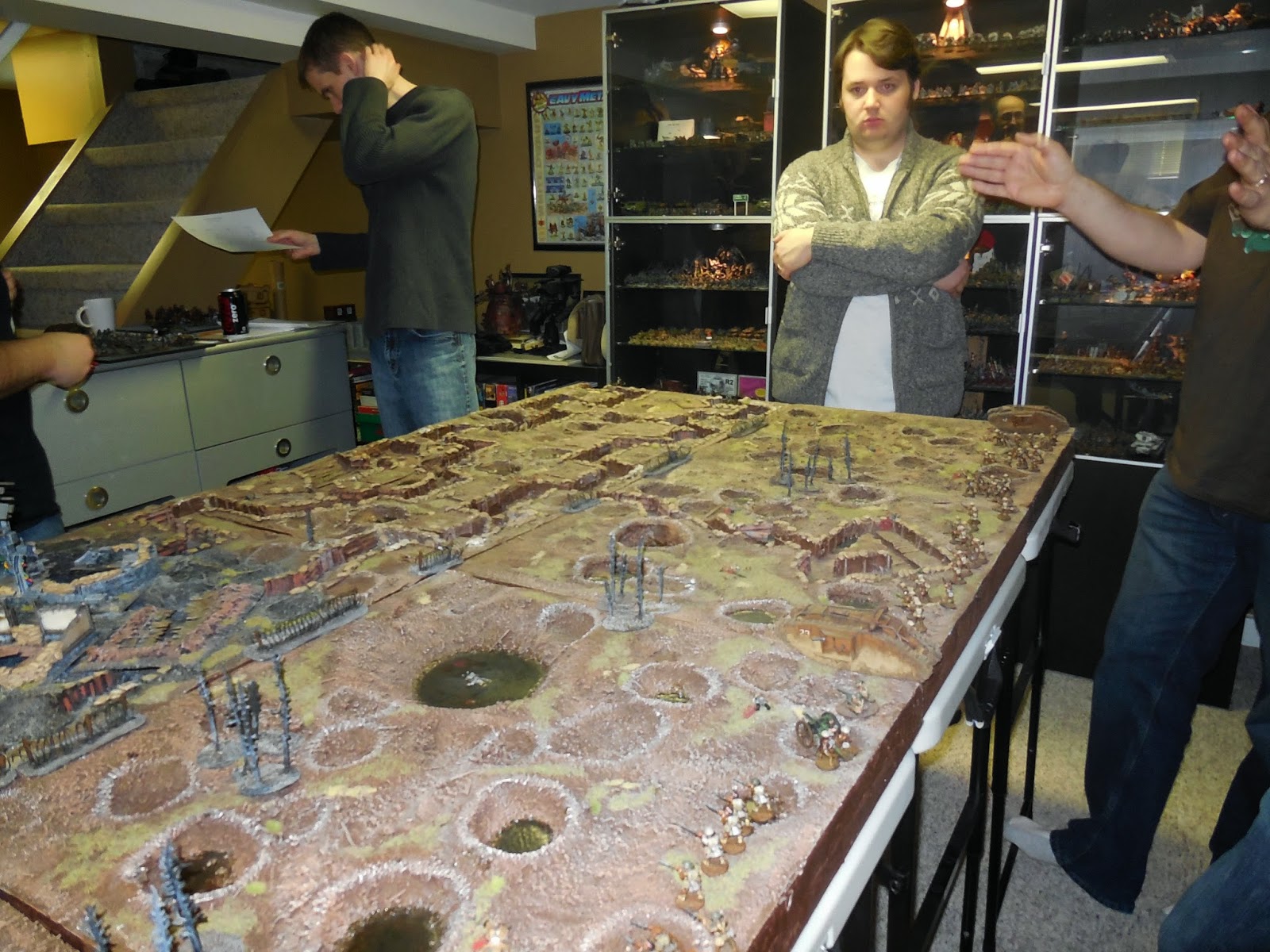 German head-scratching. The Huns deployed a battalion commanded by Major Junger, comprising two companies of two platoons each (led by Hauptmann Rosenberg and Hauptmann Remarque), two MG08s, a 77mm gun, and a medium trench mortar. In reserve they had an assault company of two platoons, an A7V tank, and a captured MK IV "Beutepanzer" (apparently NOT pronounced "booty-panzer" ;-) 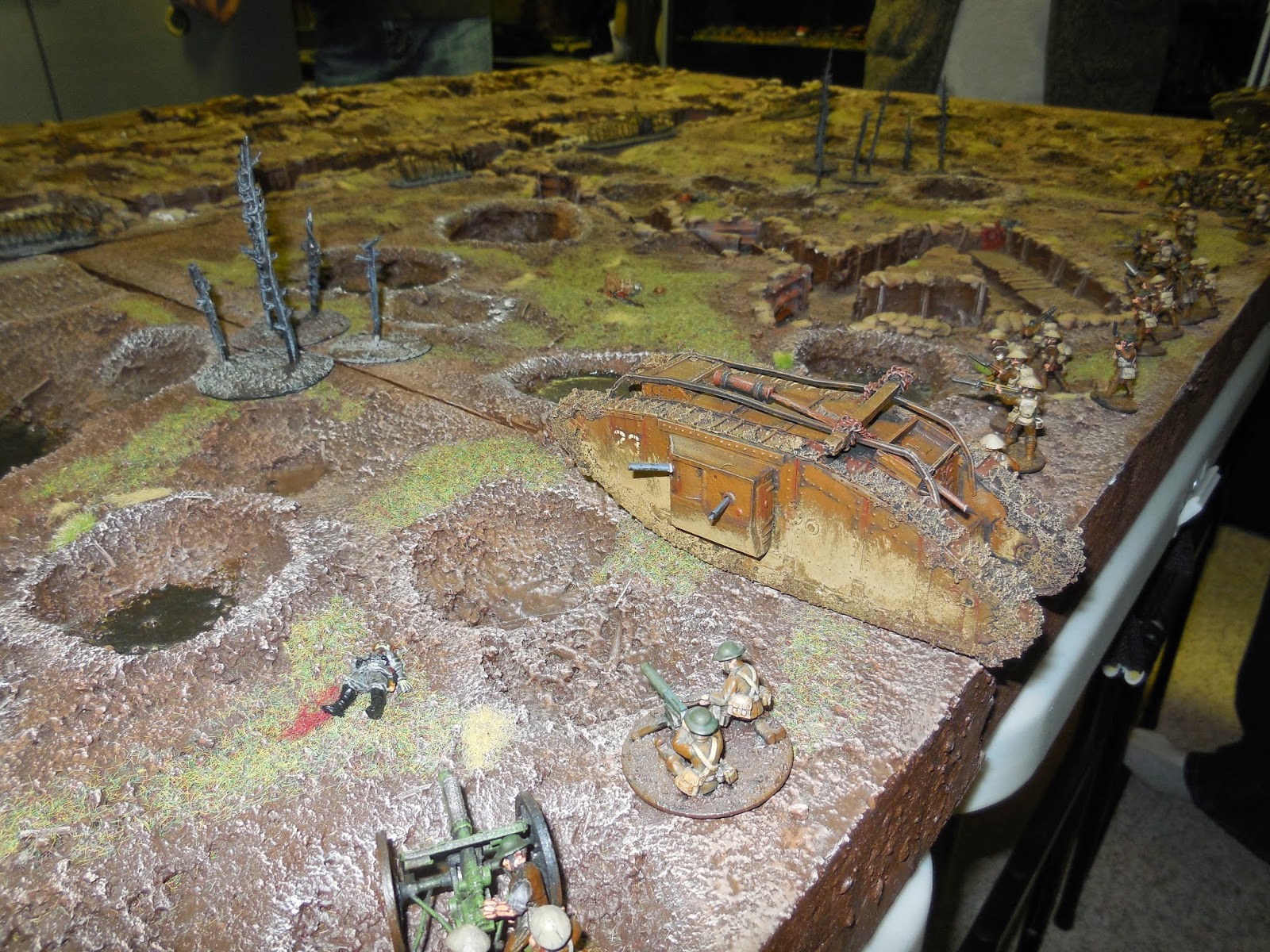 The British advance. Their machineguns were pretty effective in suppressing Mike's platoons and a few defenders were killed. 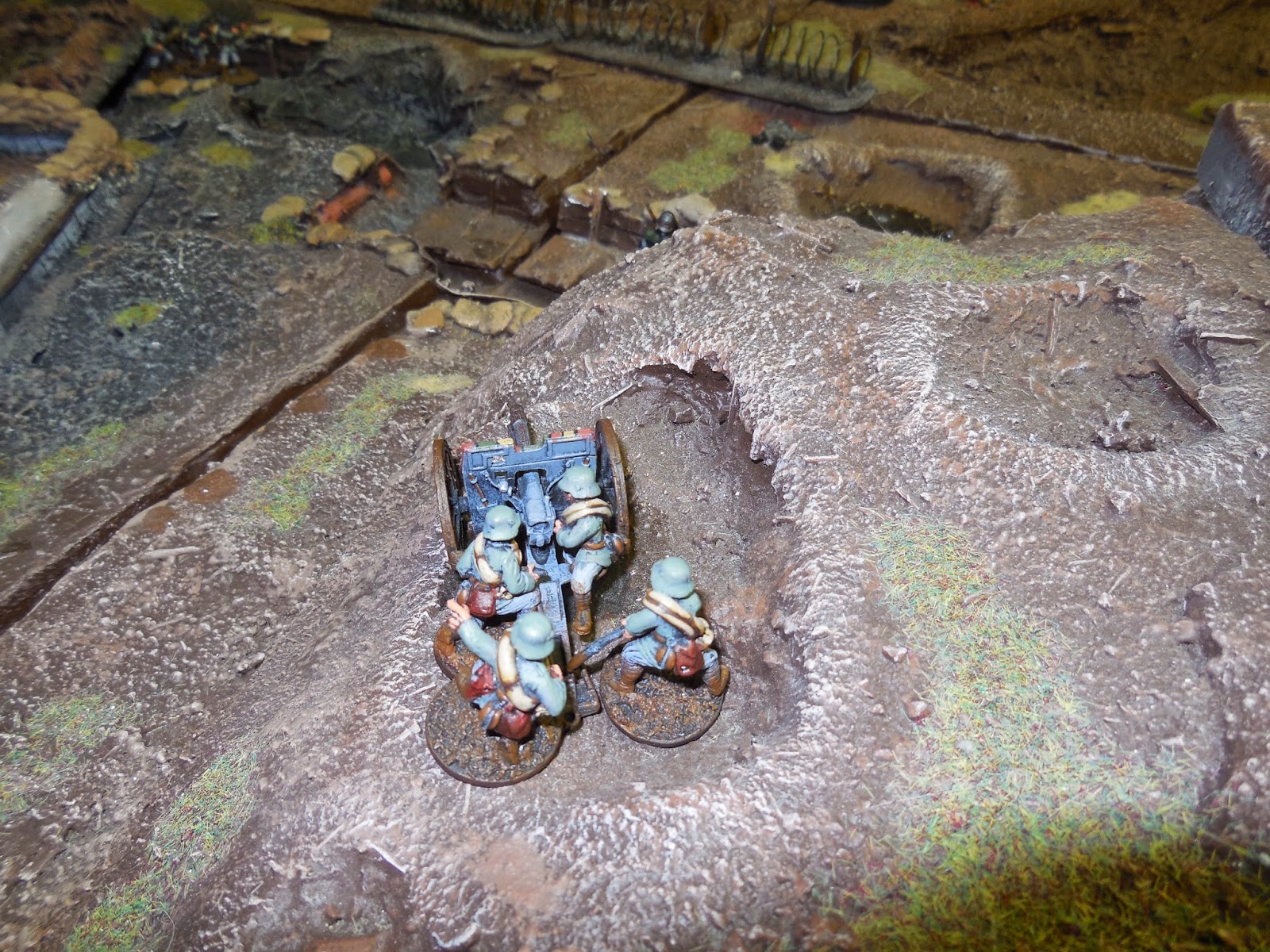 The Germans deployed their 77mm gun on "Der Pickel" (the pimple) and it commanded an excellent field of fire. Kevin was pretty deadly with it throughout the game. 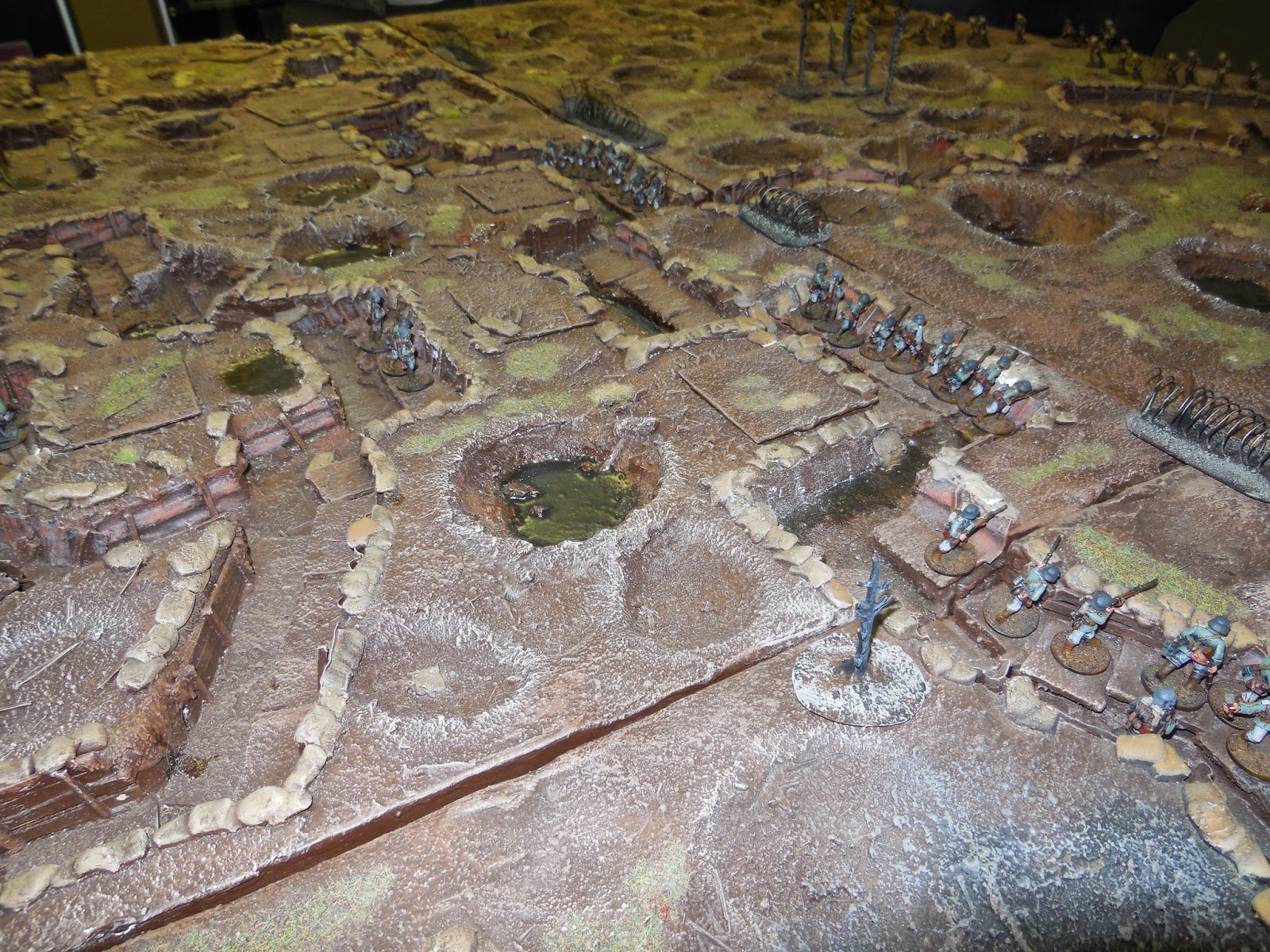 The Germans emerged from their bunkers and manned the front line trenches. 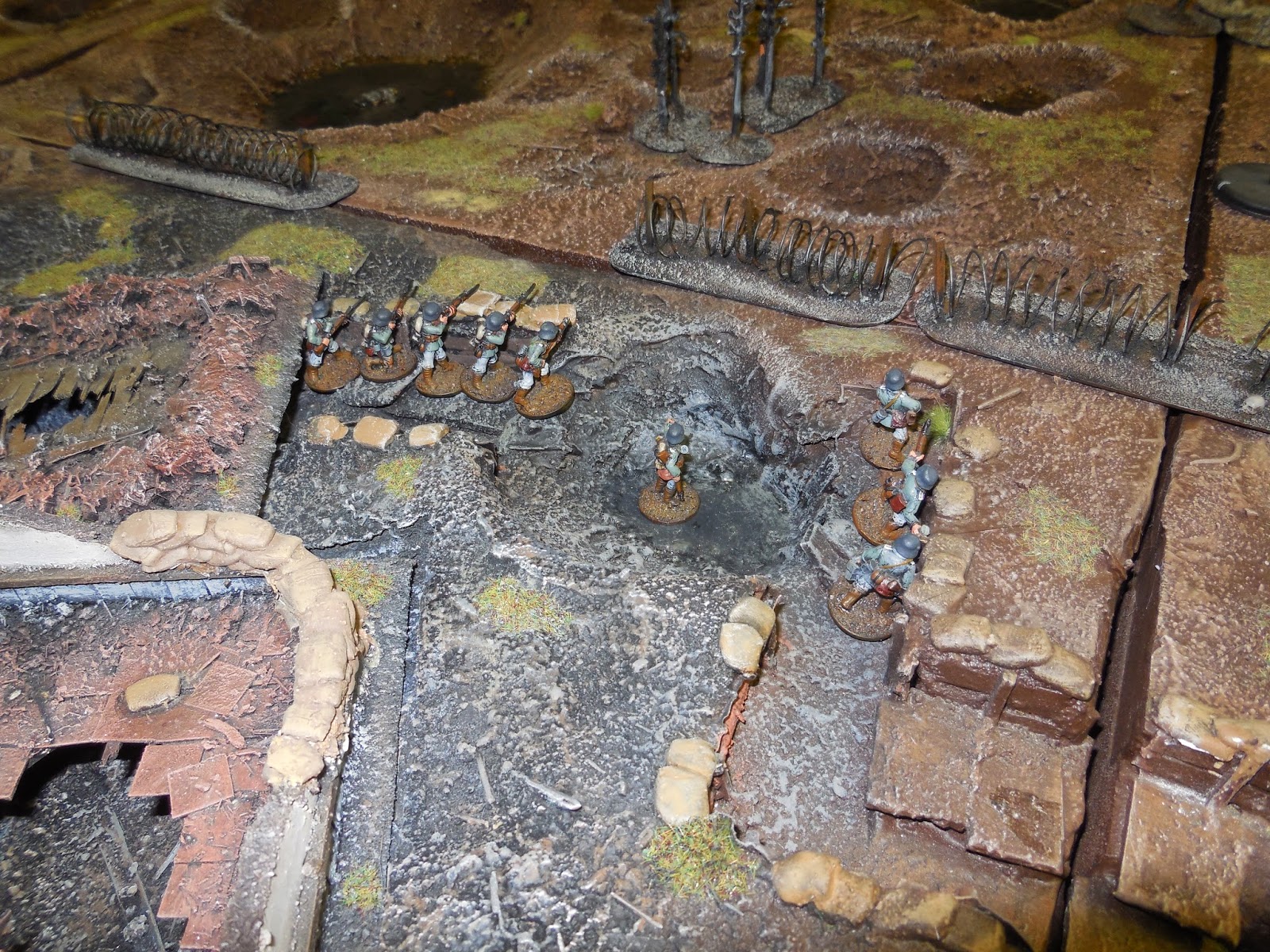 One poor fellow had to stand knee-deep in a flooded shell hole. Unit coherency can be a bitch! 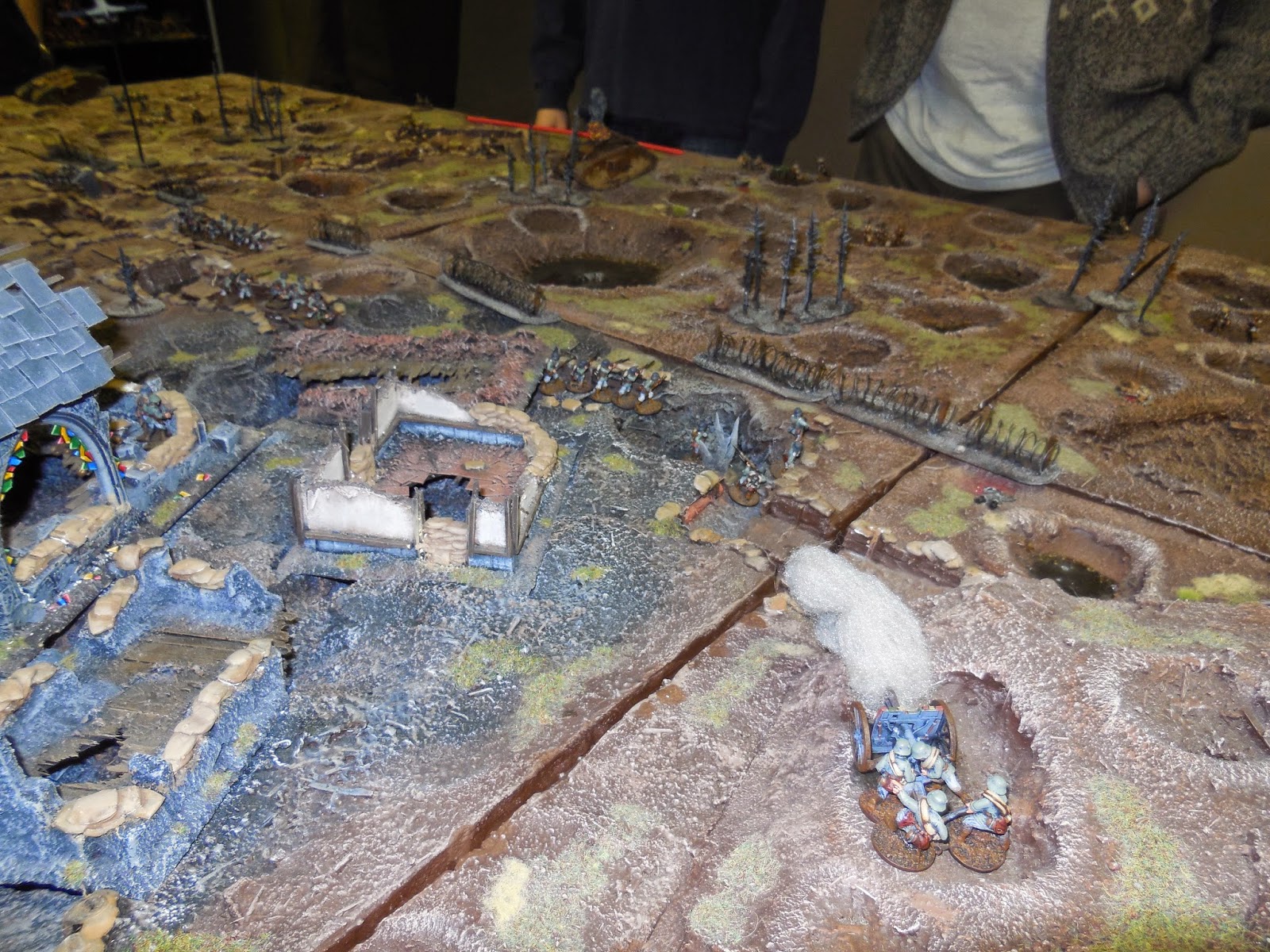 One shot from the 77mm knocks out the luckless MK IV tank. 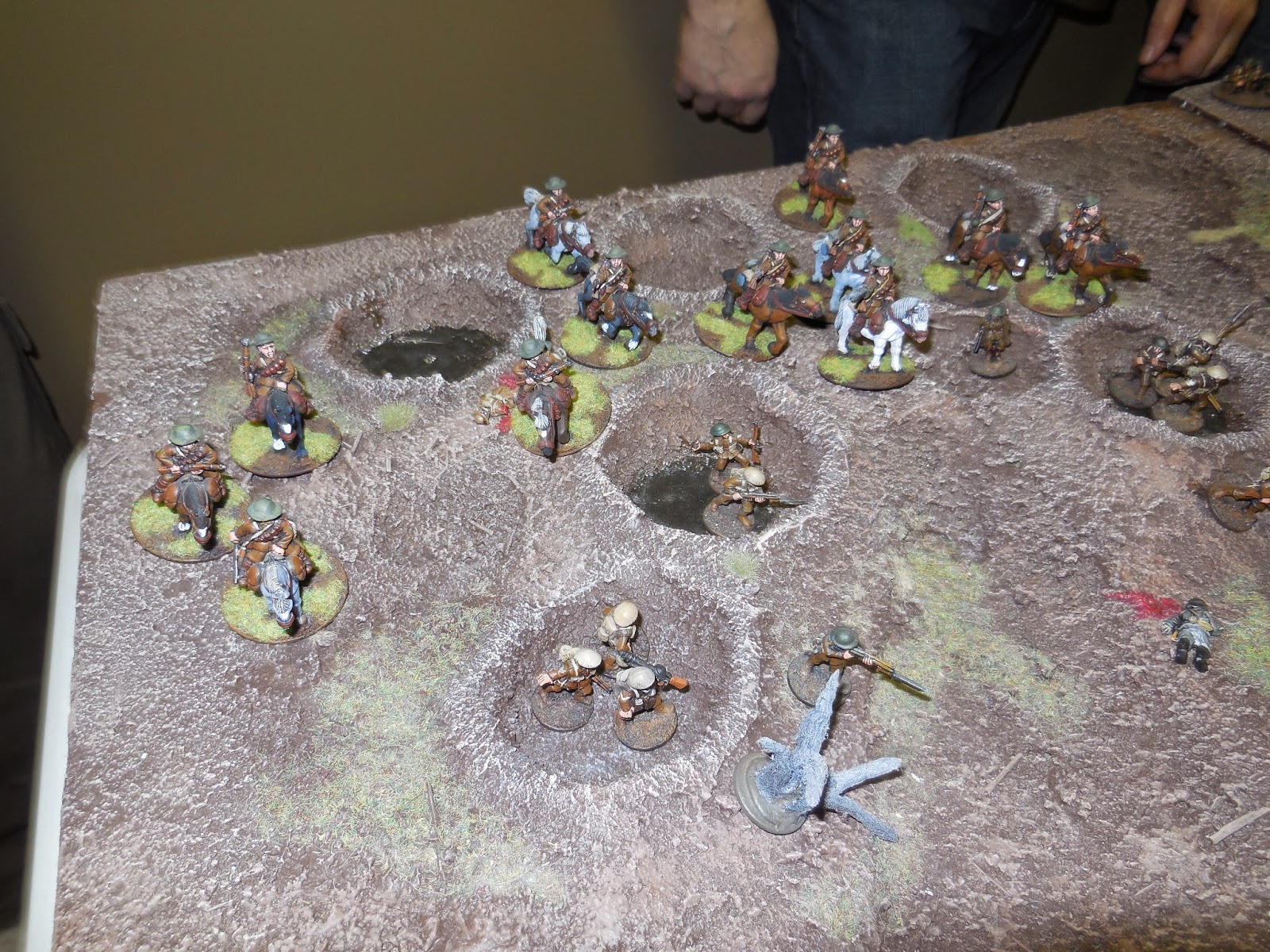 Anticipating an imminent breakthrough the cavalry appeared to exploit it. 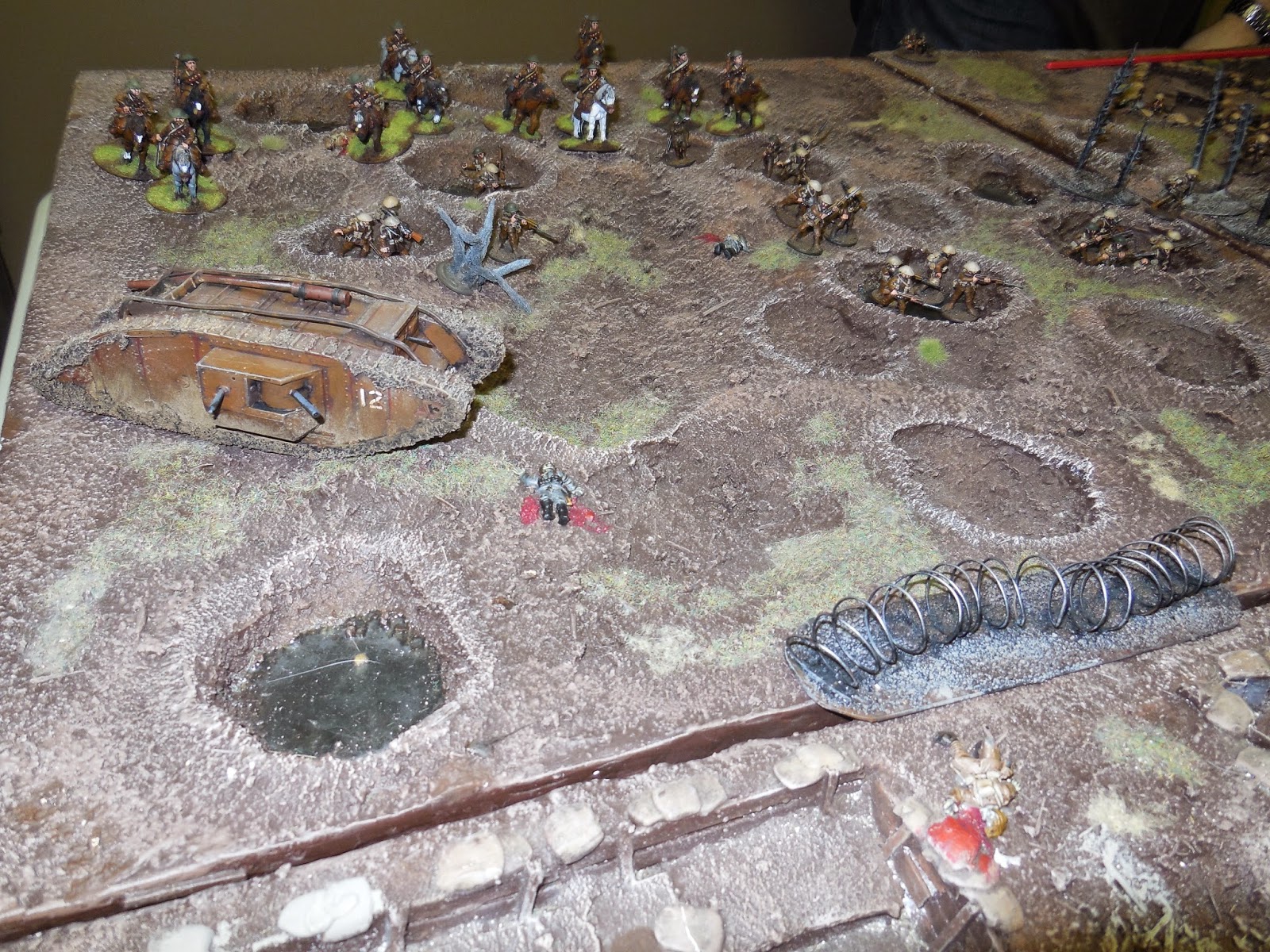 Keegan's tank had broken down but he still worked the guns as the cavalry advanced. 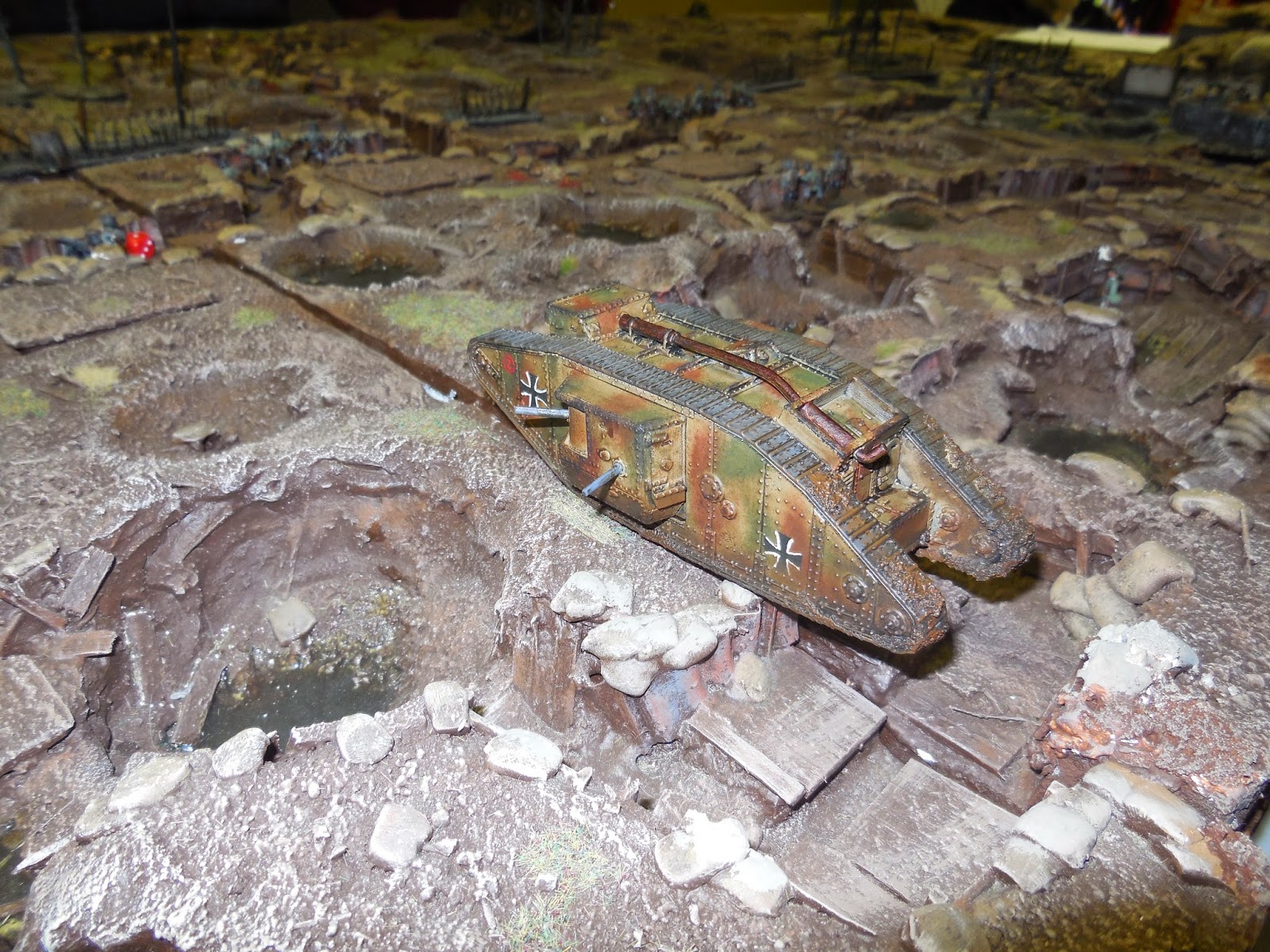 Late in the game the German MK IV appeared. The A7V never showed up as apparently it must've broken down on the way to the start line. 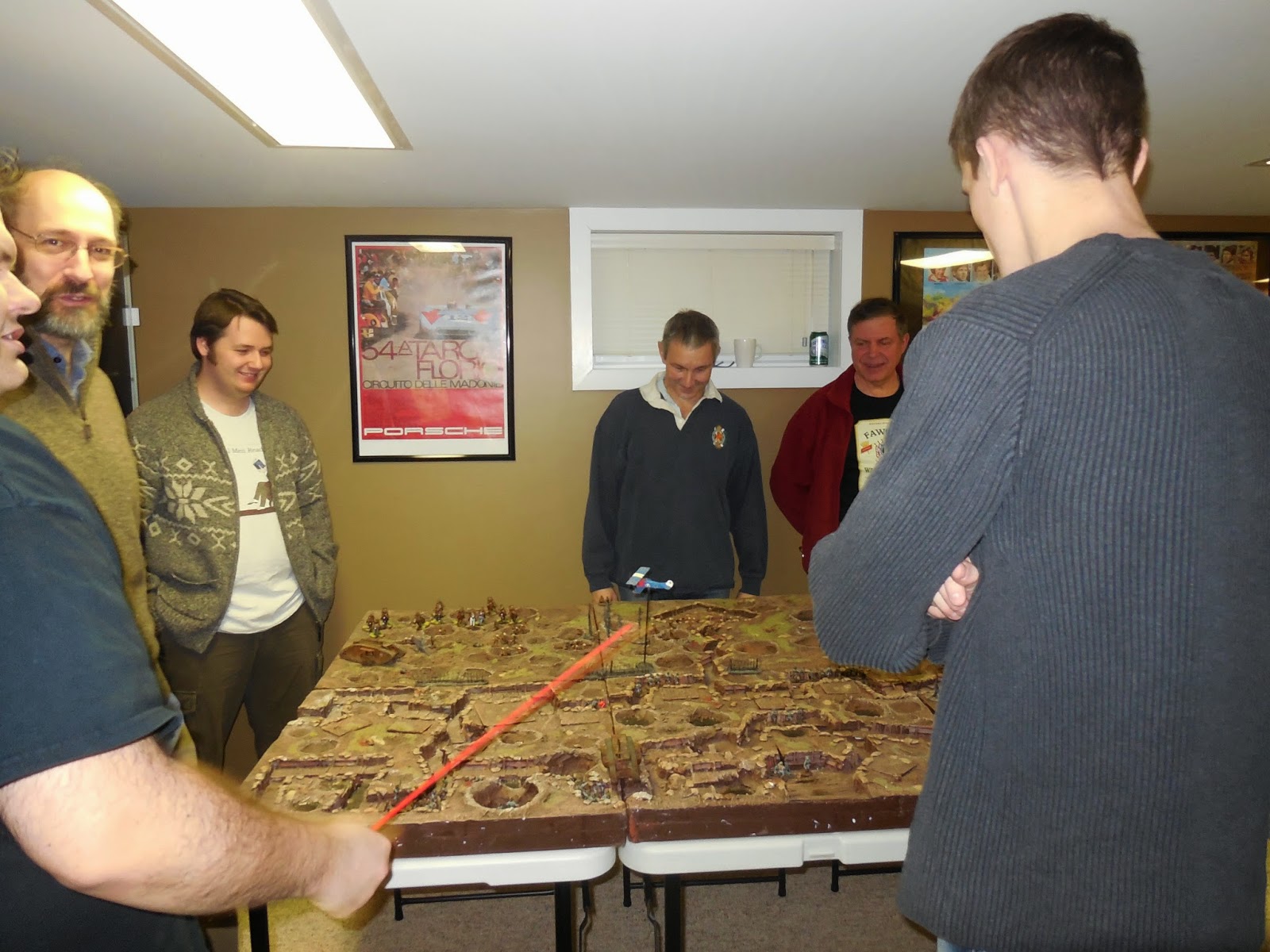 The lads ponder the progress of the British attack. 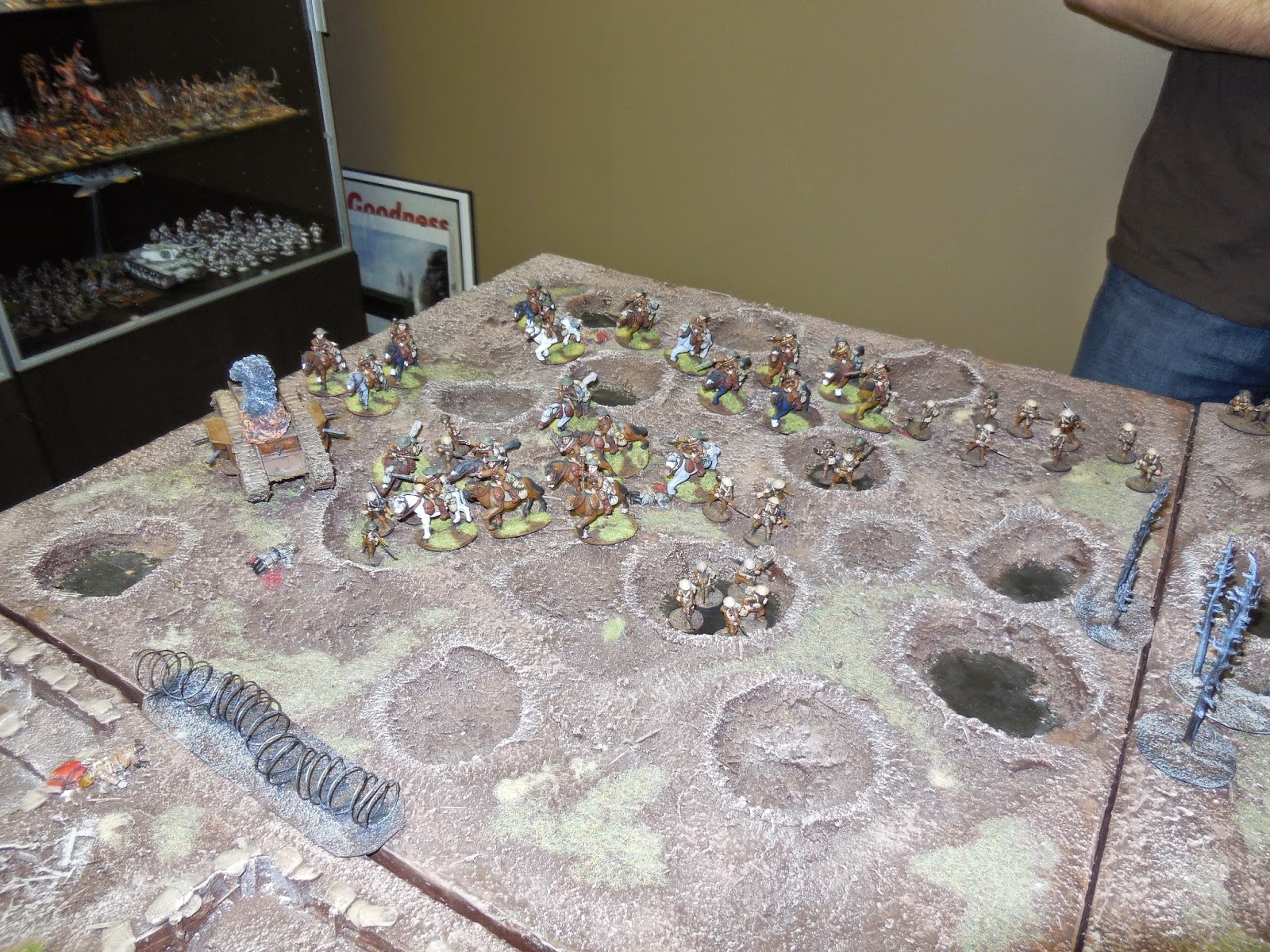 Another good shot from Kevins "77" knocks out Keegan's tank for good. Iron Crosses all around for that crew! 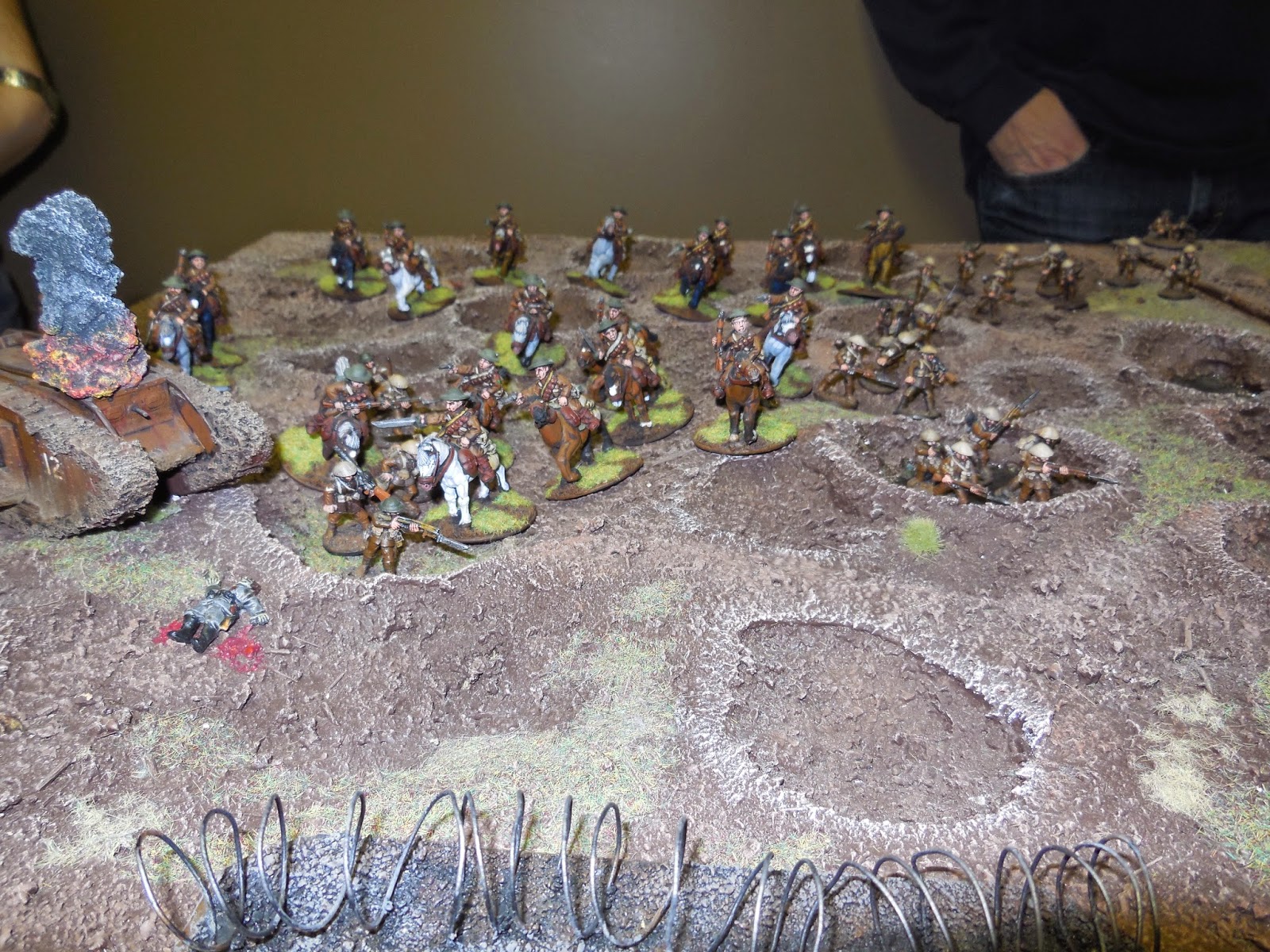 The cavalry surges bravely forward towards the wire. 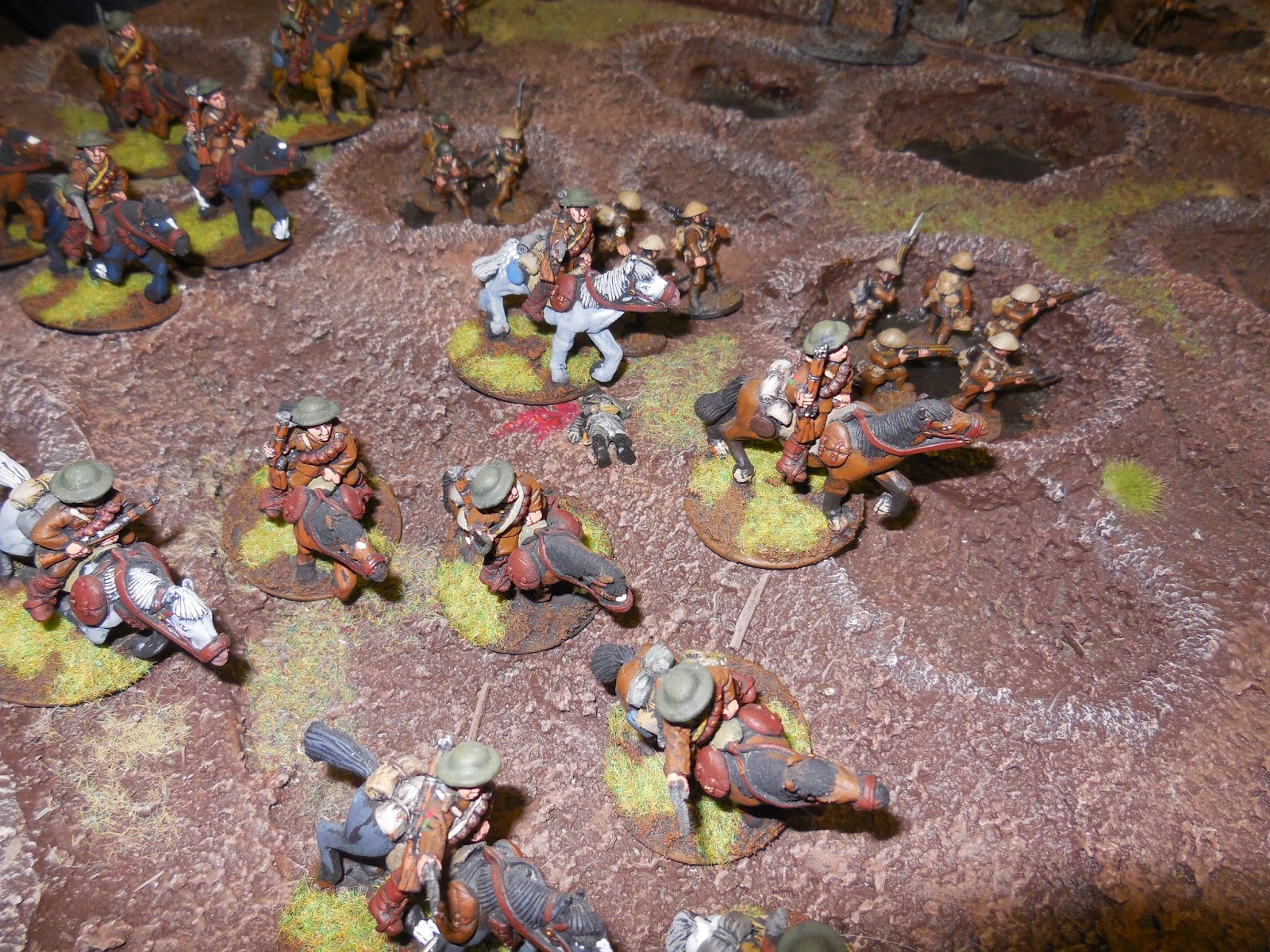 German fire has weeded out their ranks though... 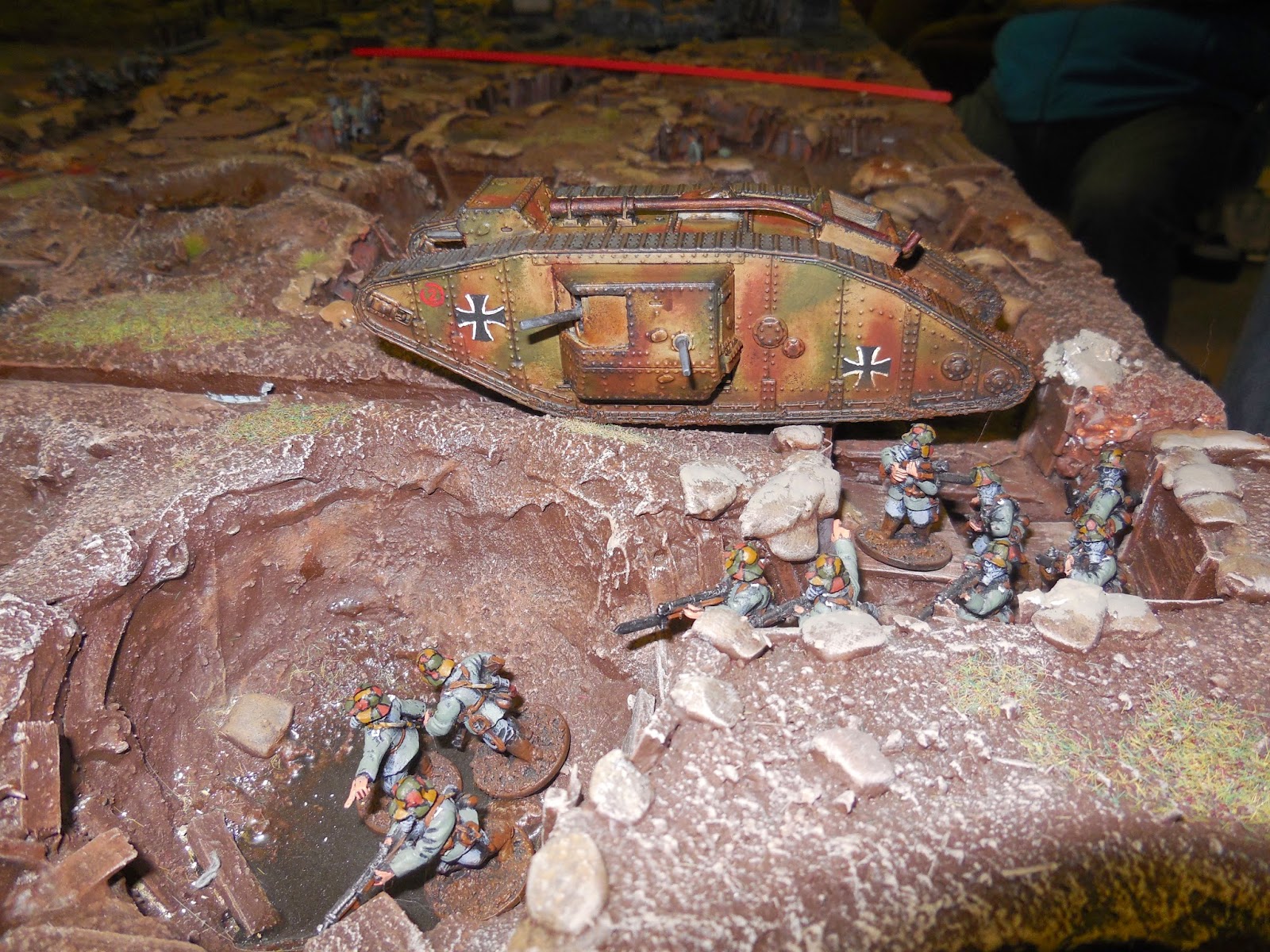 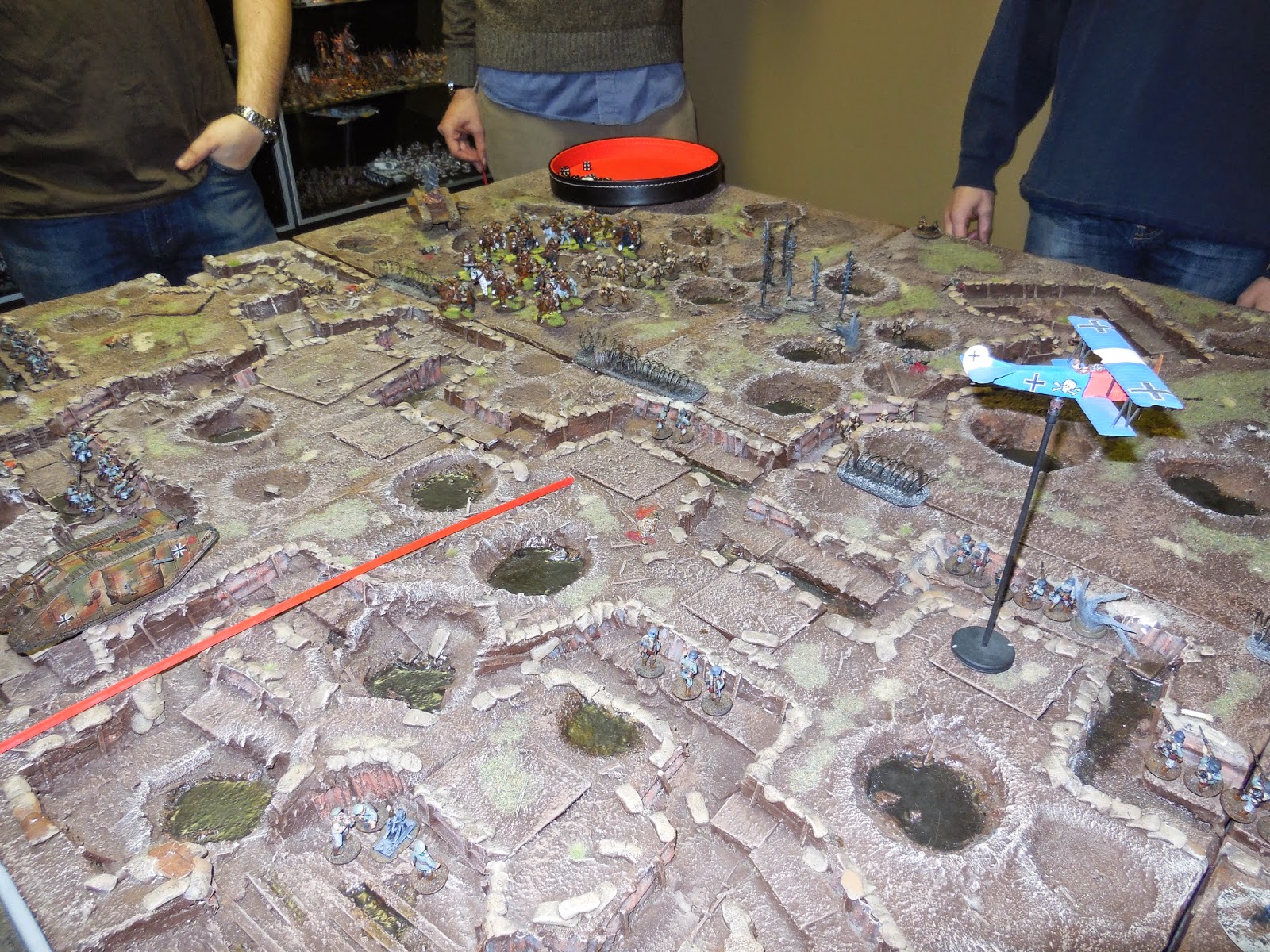 Fokker circles the battlefield, high above the death and destruction. 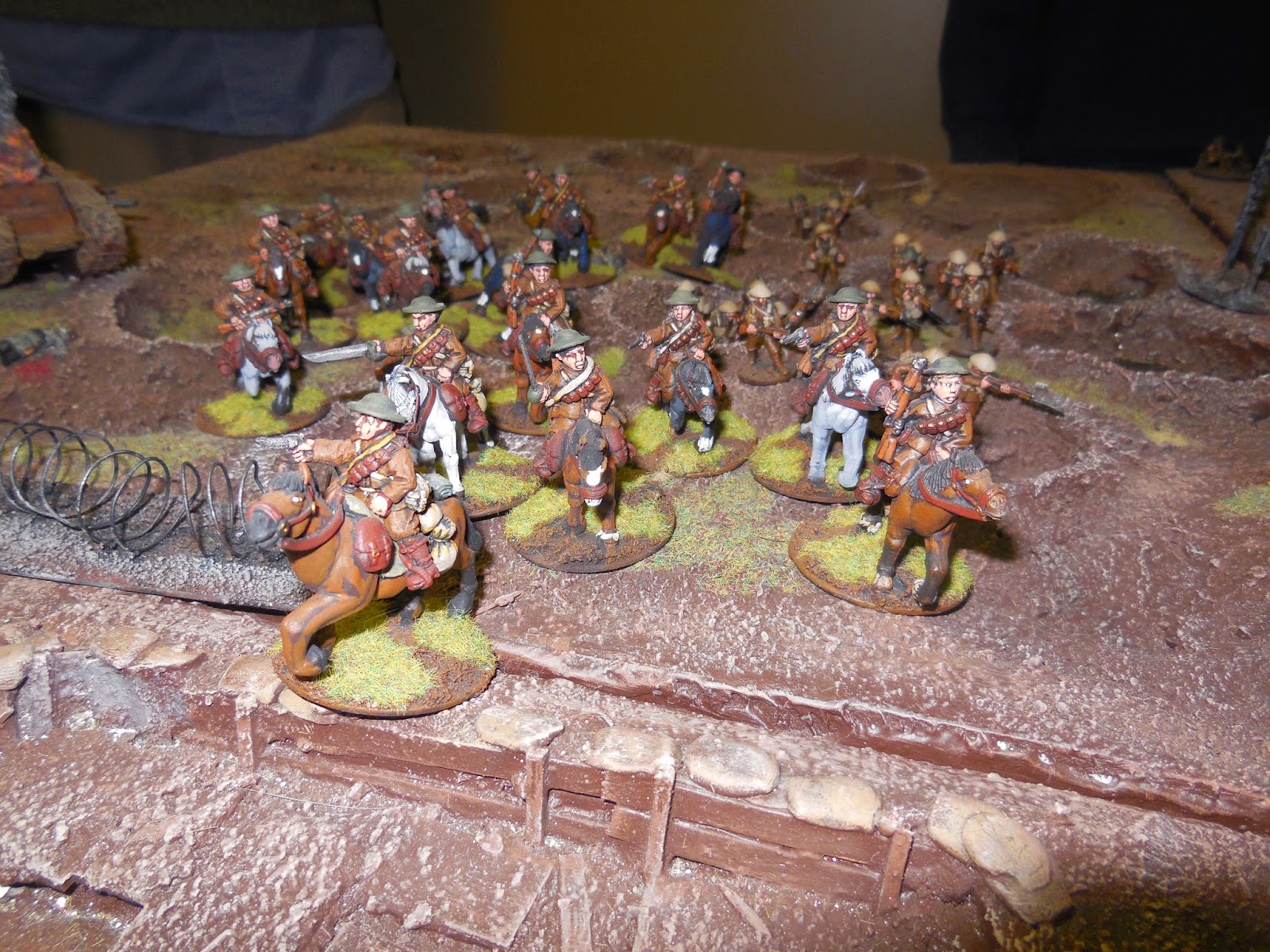 The leading cavalry troop just made it to the edge of the front line trenches. Some of their infantry comrades occupied the trench line just in front of them as the game was ending. 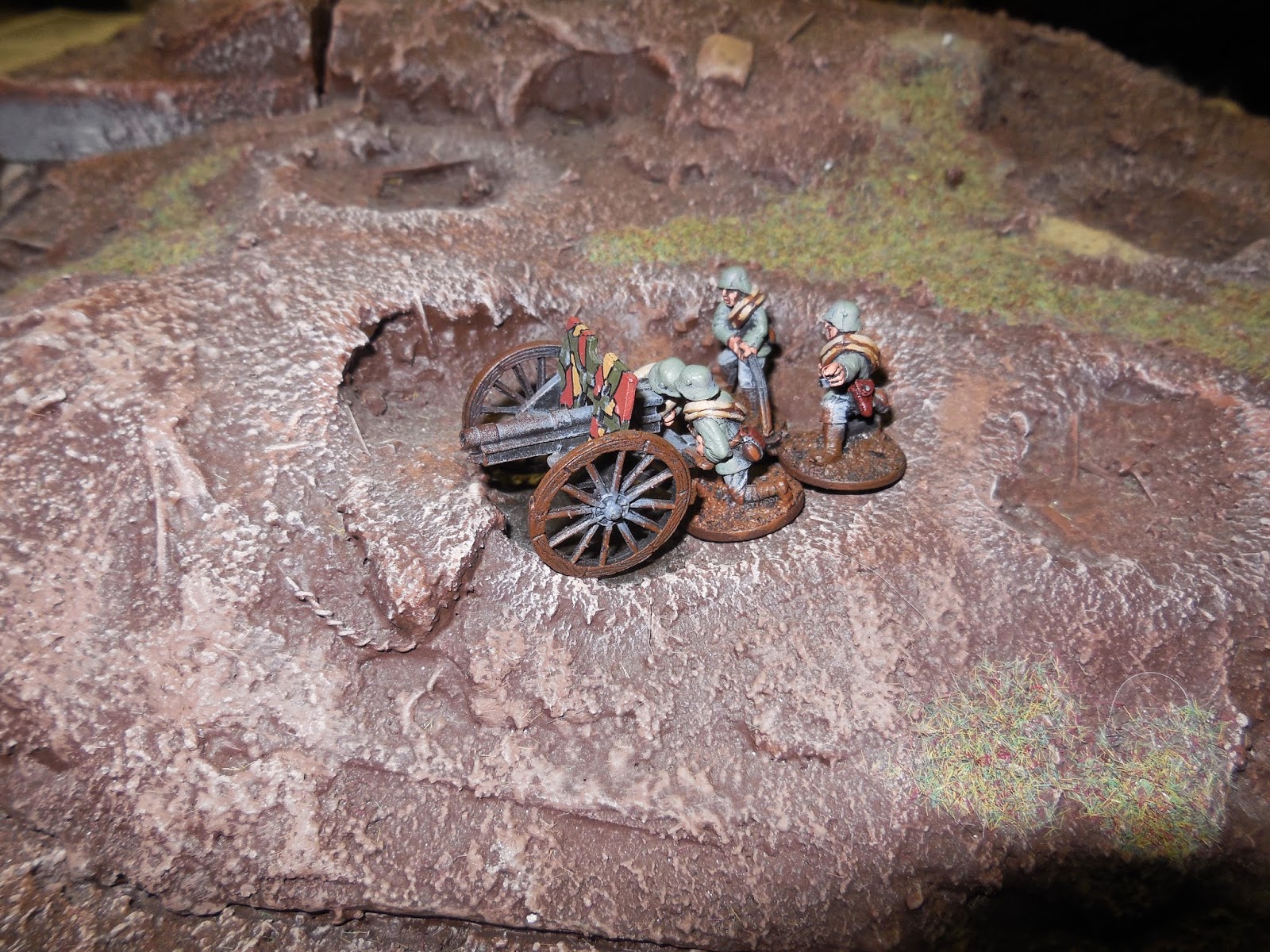 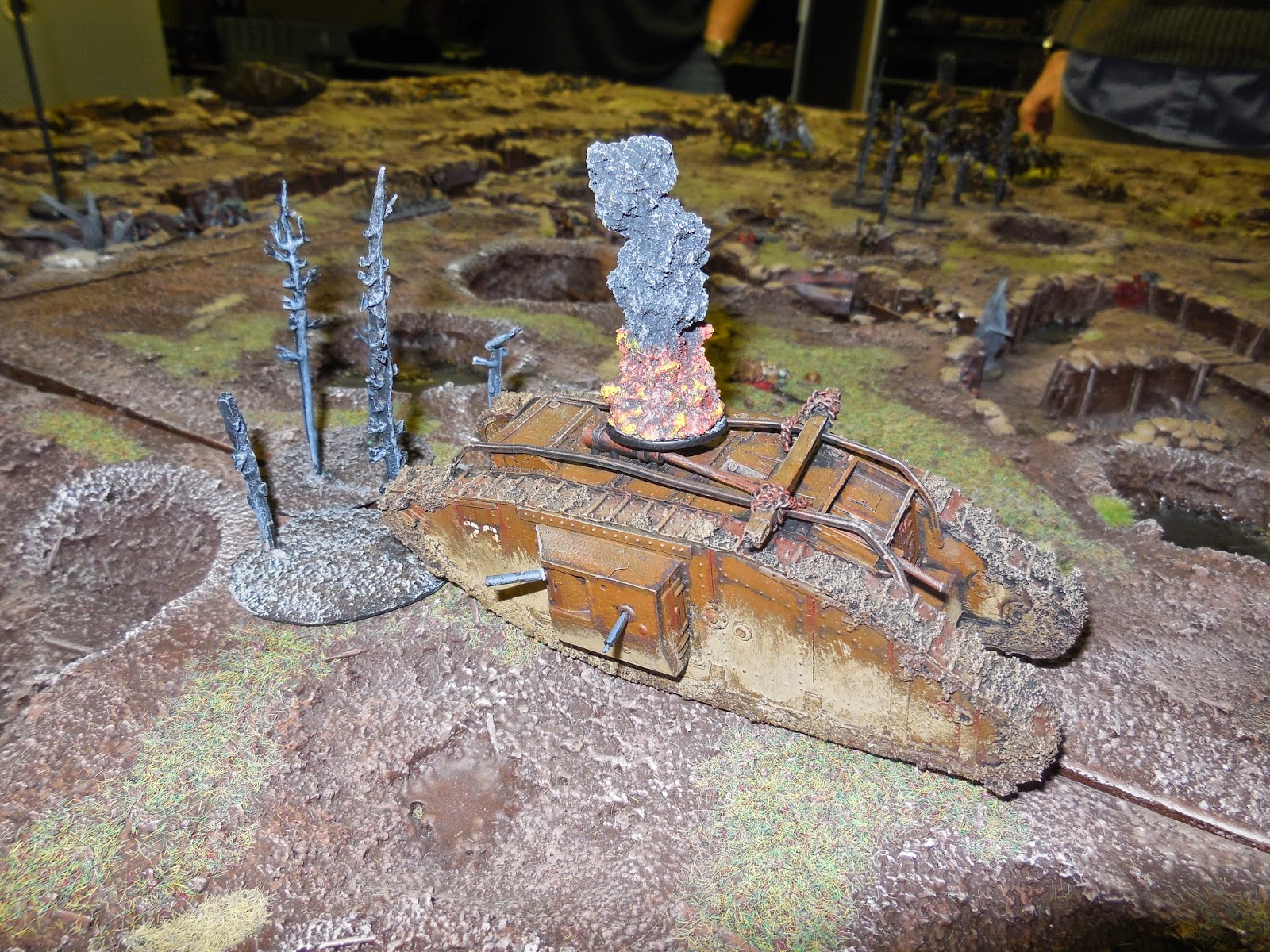 A proud fighting machine is reduced to battlefield debris.

Well, the game ended as expected - the British had made a minor gain on their right flank but the Germans reinforced their supports so the Brits would be in for a fight to hold on. I think when we play this game again I'll start the British a bit farther onto the table - maybe 12" in rather than the 3" or so in this game. It just gives a bit less ground for them to cover. Of course, starting in closer can be a slight disadvantage for them too, as their MGs have fewer turns with clear fields of fire, so that's a nice tradeoff. I'd tweak the rules slightly as well, to allow a "run" move of d6" in the Close Assault phase for troops who didn't shoot.

All in all I think a very successful and enjoyable lunch and game. The terrain sure looks great and I think everyone had a good time and enough fine food to eat - which is the whole point of the New Year's game.

Dallas
Posted by Dallas at 1:17 PM

Wonderful stuff! That you all seem to be having so much fun says everything you need to know. Happy New Year to each and every one of you from the boys at Canister & Grape.

What an awesome looking game! You don't often see such a great WW1 table.

Thanks for hosting Dallas! That was a great game.

And a huge thank you to Pam for the great food!