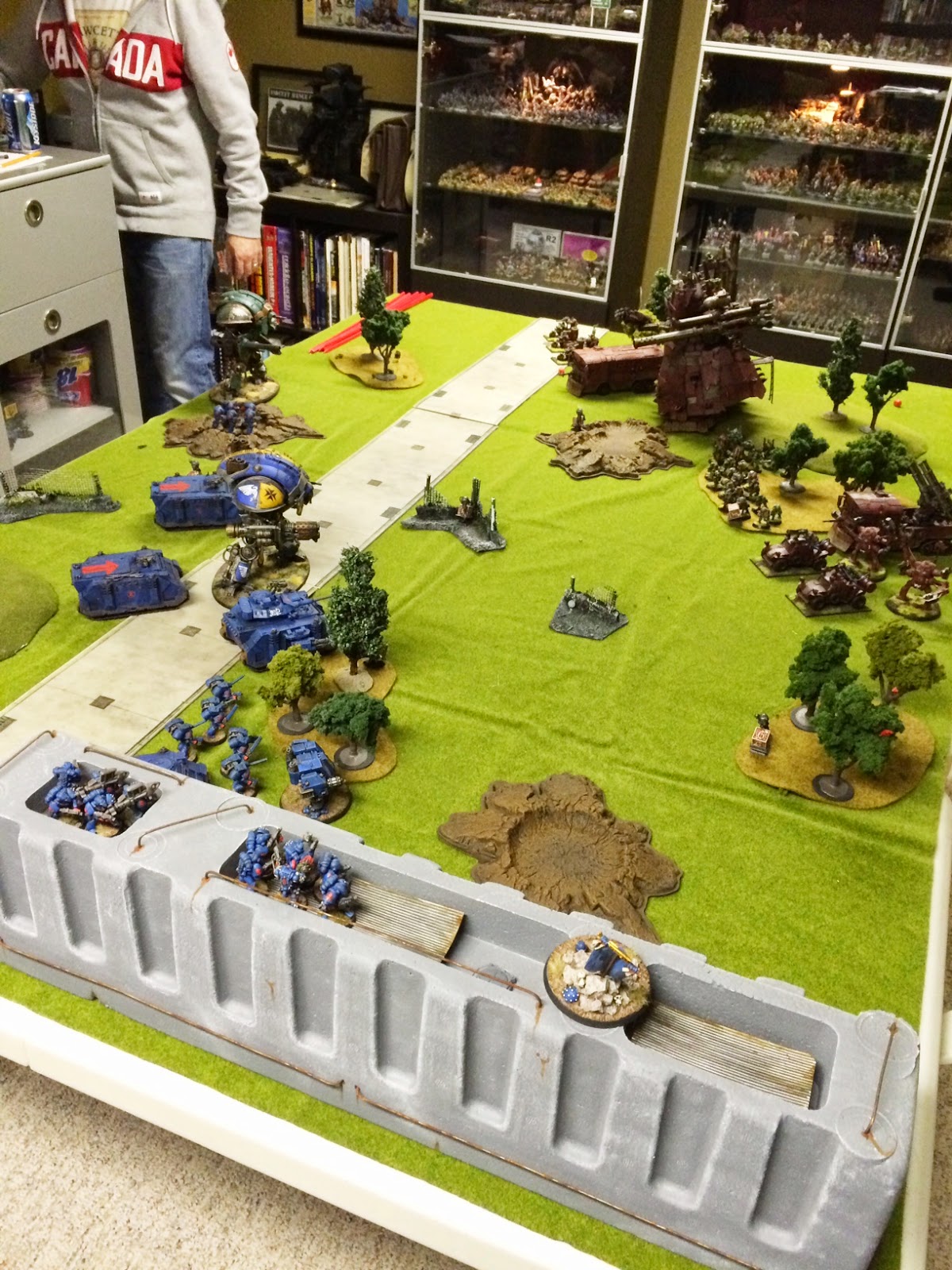 Last Thursday we decided to roll out some new models that hadn't yet been battle-tested - the Ork Stompa I finished last week, and the Imperial Knights that Conscript Greg and I painted last summer.
The game would be the culmination of the Rynn's World campaign we'd been playing for some time - the final assault by Thrugg Bullneck and his warband (along with the Stompa!) on the Imperial stronghold of New Rynn City, defended by Pedro Kantor's Crimson Fist Space Marines and two mighty Imperial Knights.
﻿ 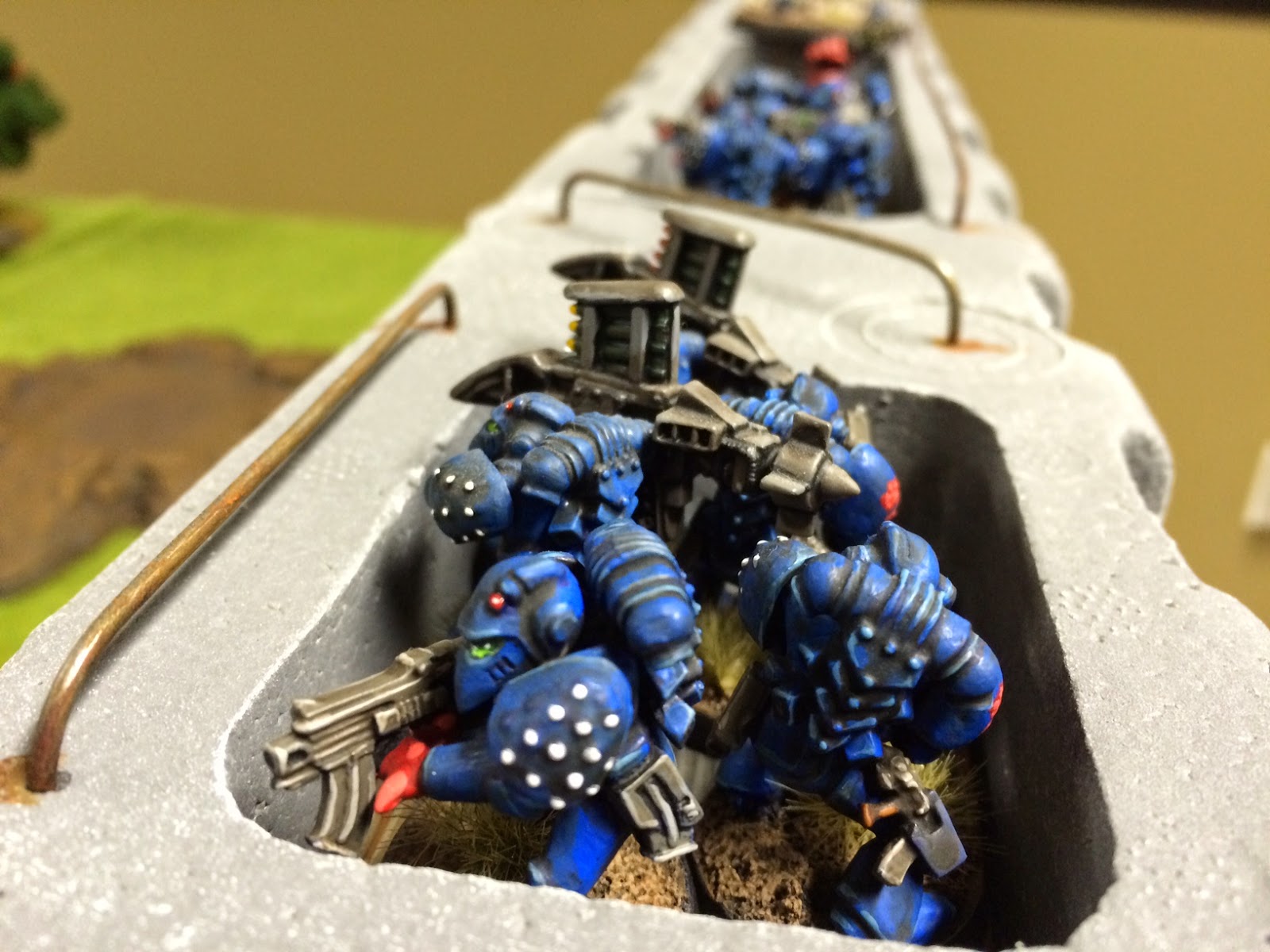 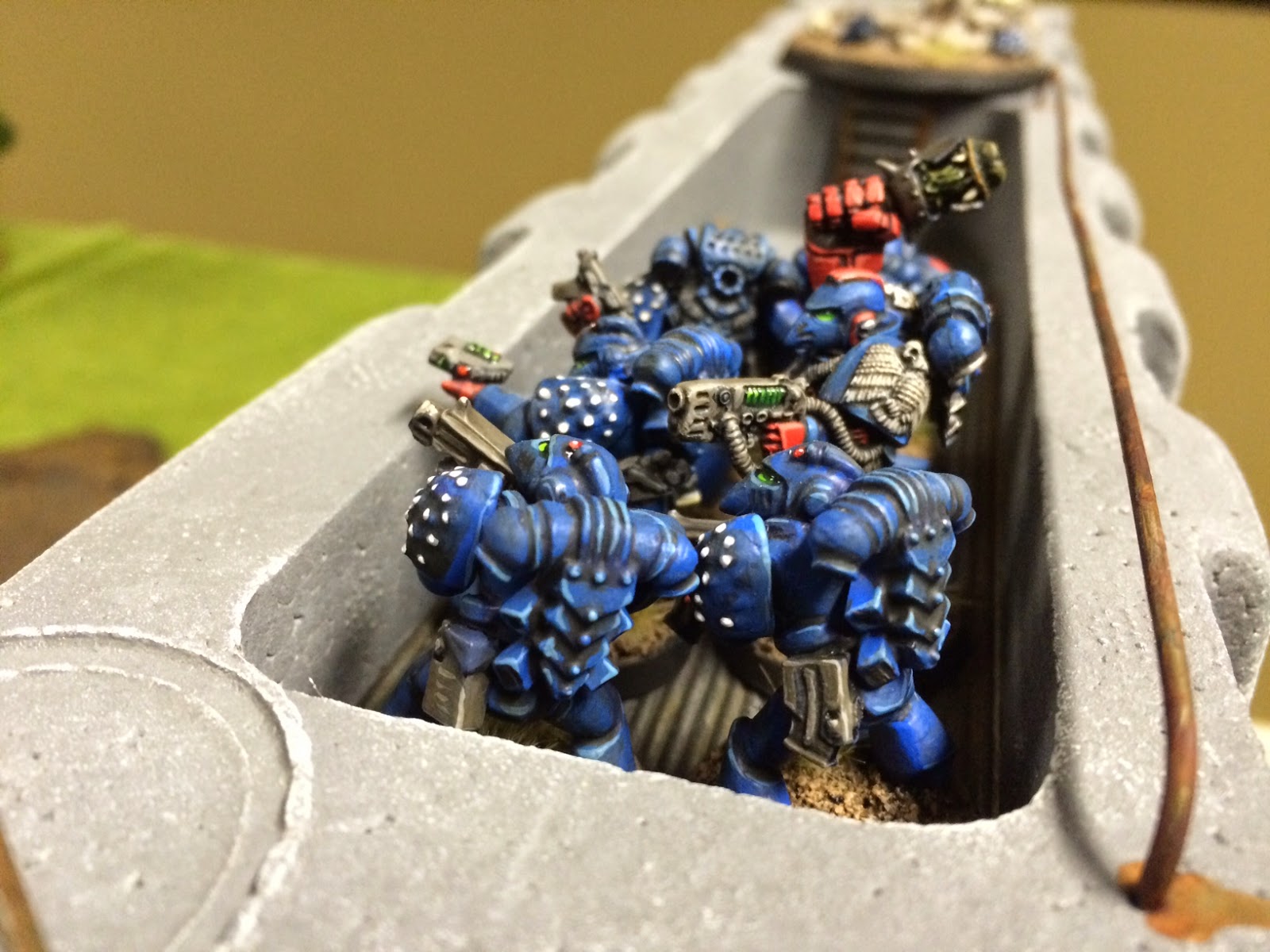 Space Marine Devastators take up position on the city walls. The scenario was simple - six objective markers placed on the battlefield, the forces lined up on the diagonal just like a beauty shot from the old White Dwarf :-) 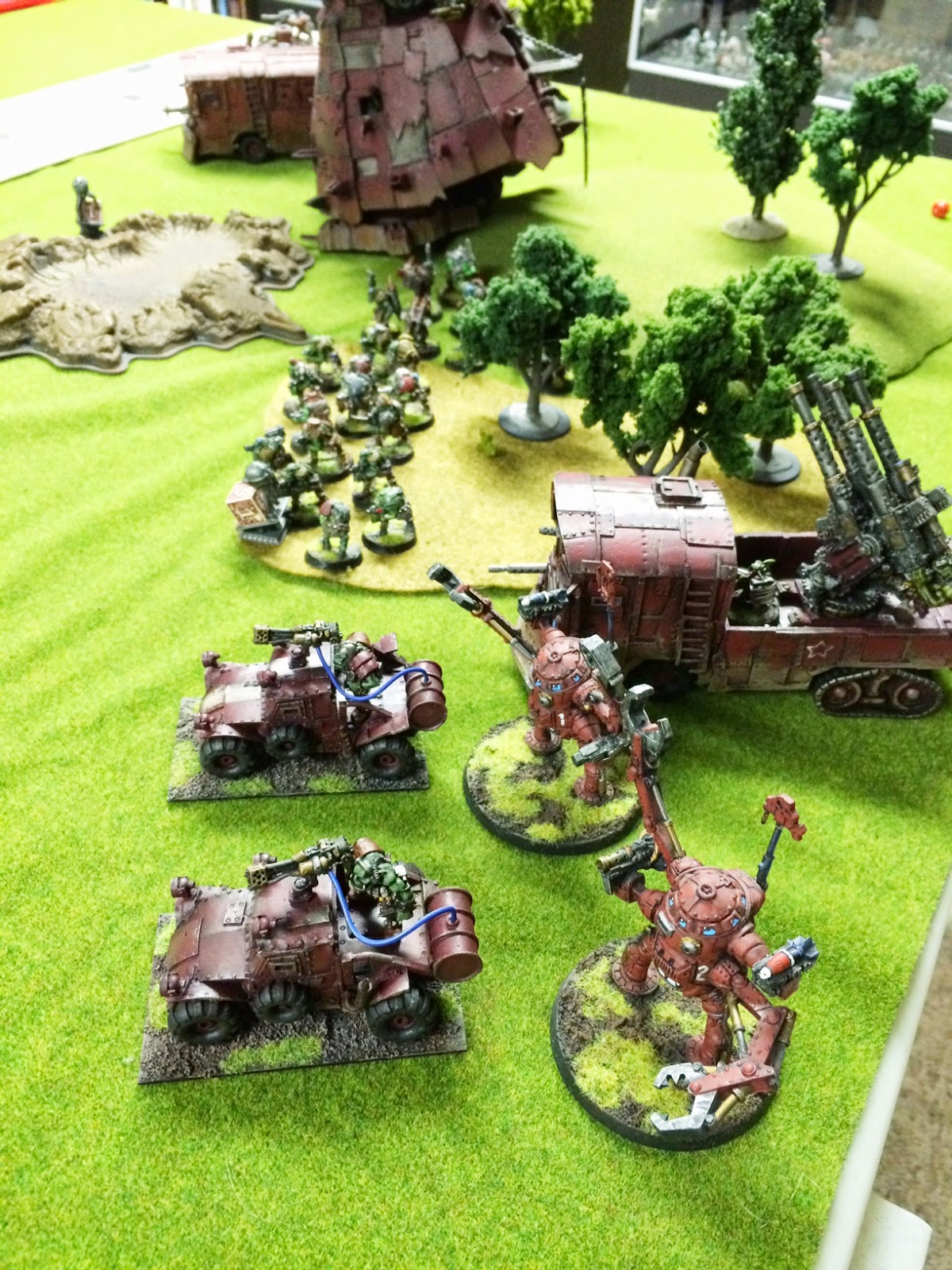 The Orks fielded, in no particular order: two squadrons of two and three warbuggies; two Deff Dreads, a Flakka Dakka wagon; three mobs of 15 Boyz; a unit of 5 Kommandos; a Battlewagon with Killkannon, a unit of 10 Stormboyz, and finally, Thrugg himself in mega-armor with 5 mega-armored henchmen. Oh, and the Stompa. 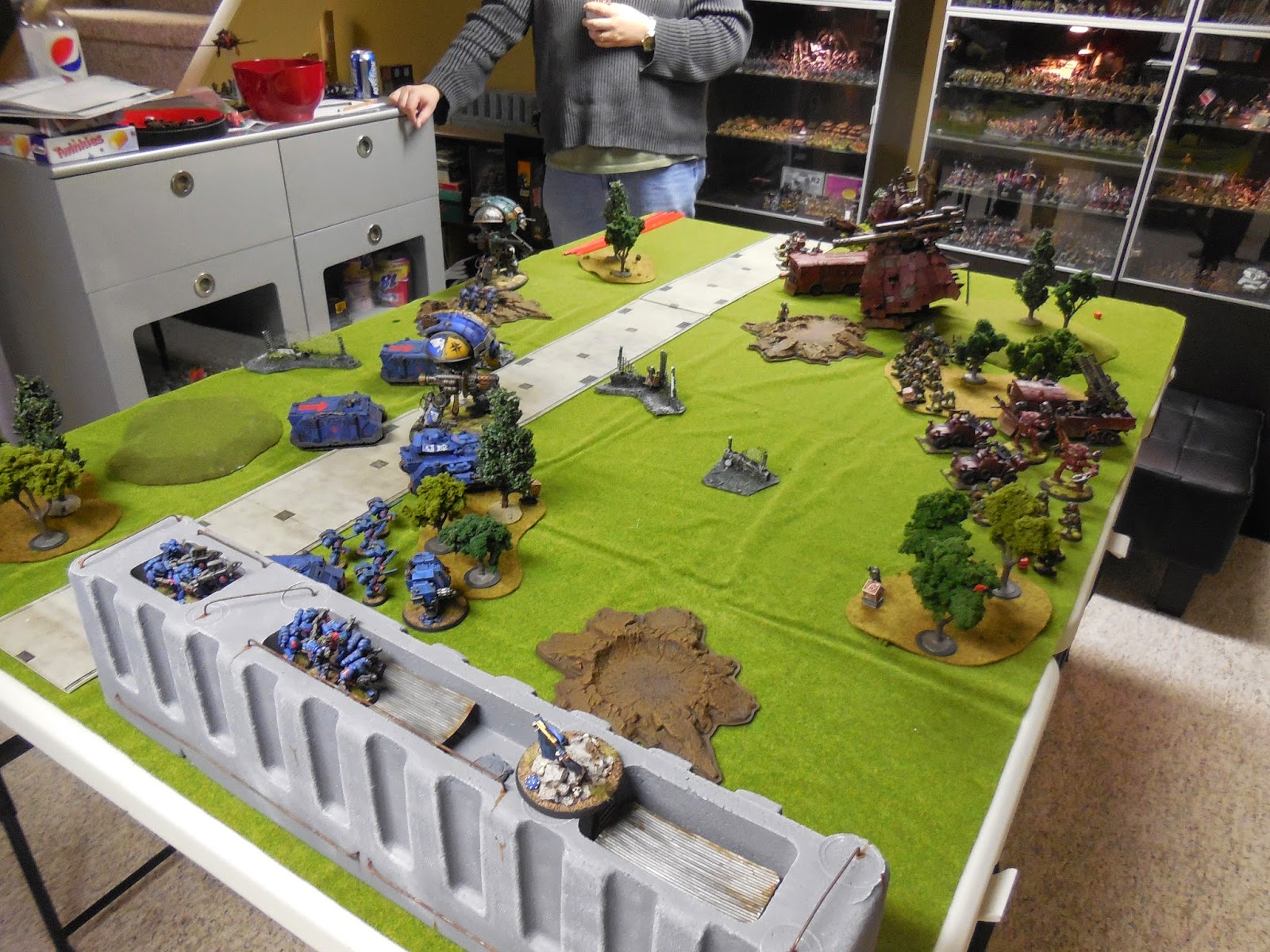 The Imperials came out with three squads of Marines in Rhinos, a Predator, a Devastator squad, a Terminator squad, Scouts, an Assault squad, and Pedro. Plus two Imperial Knights - 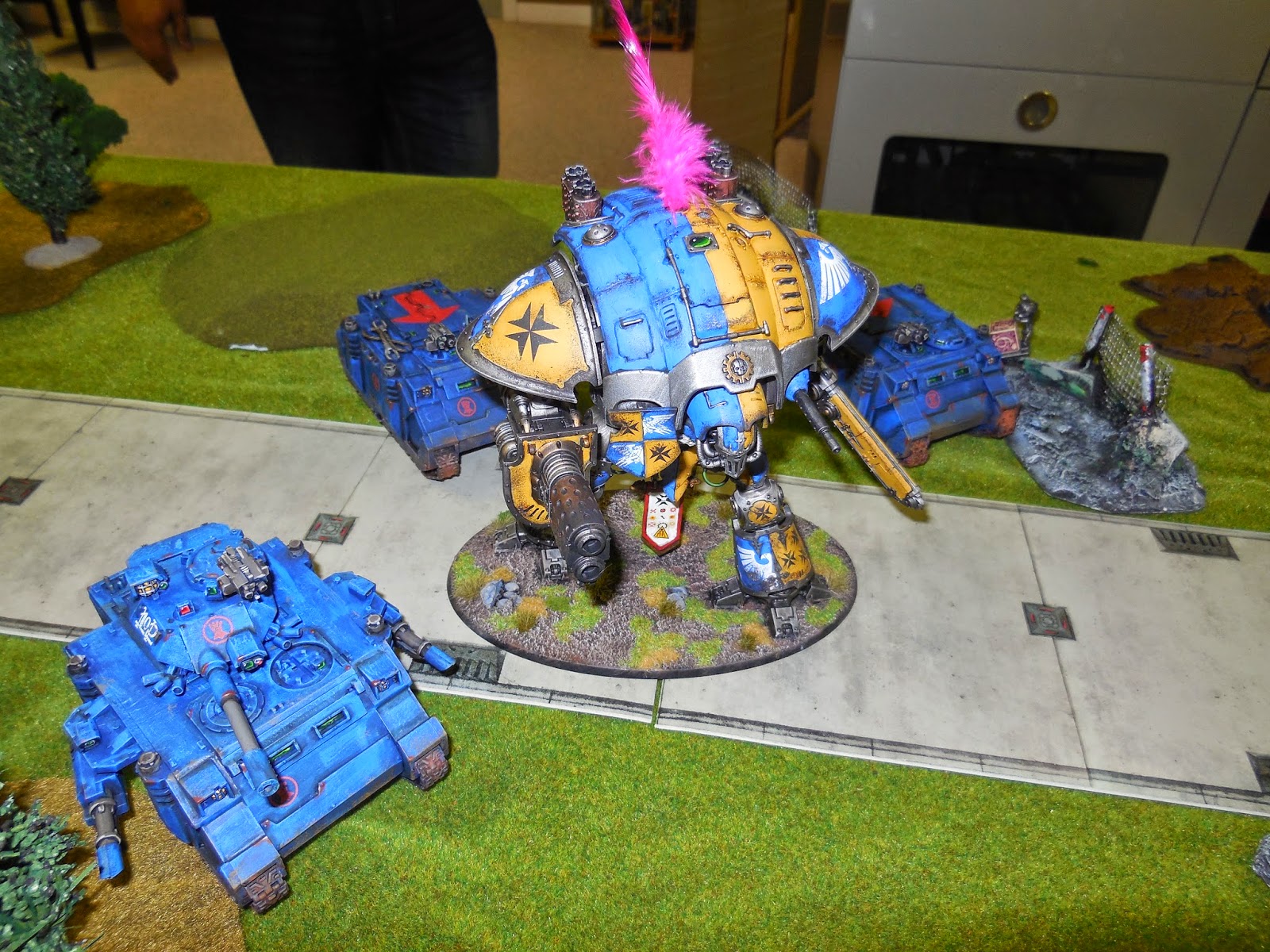 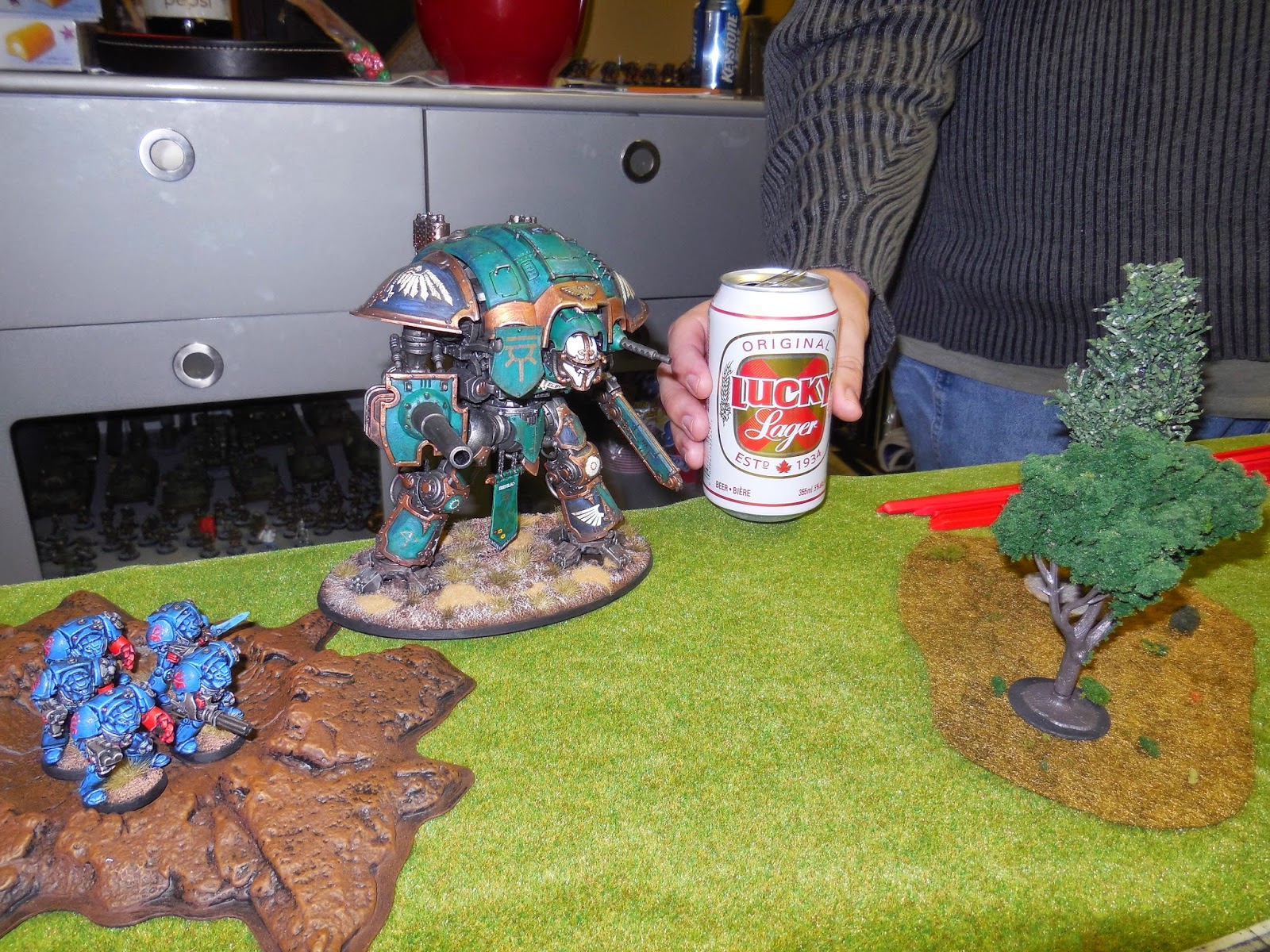 and the famous "El Booze"! 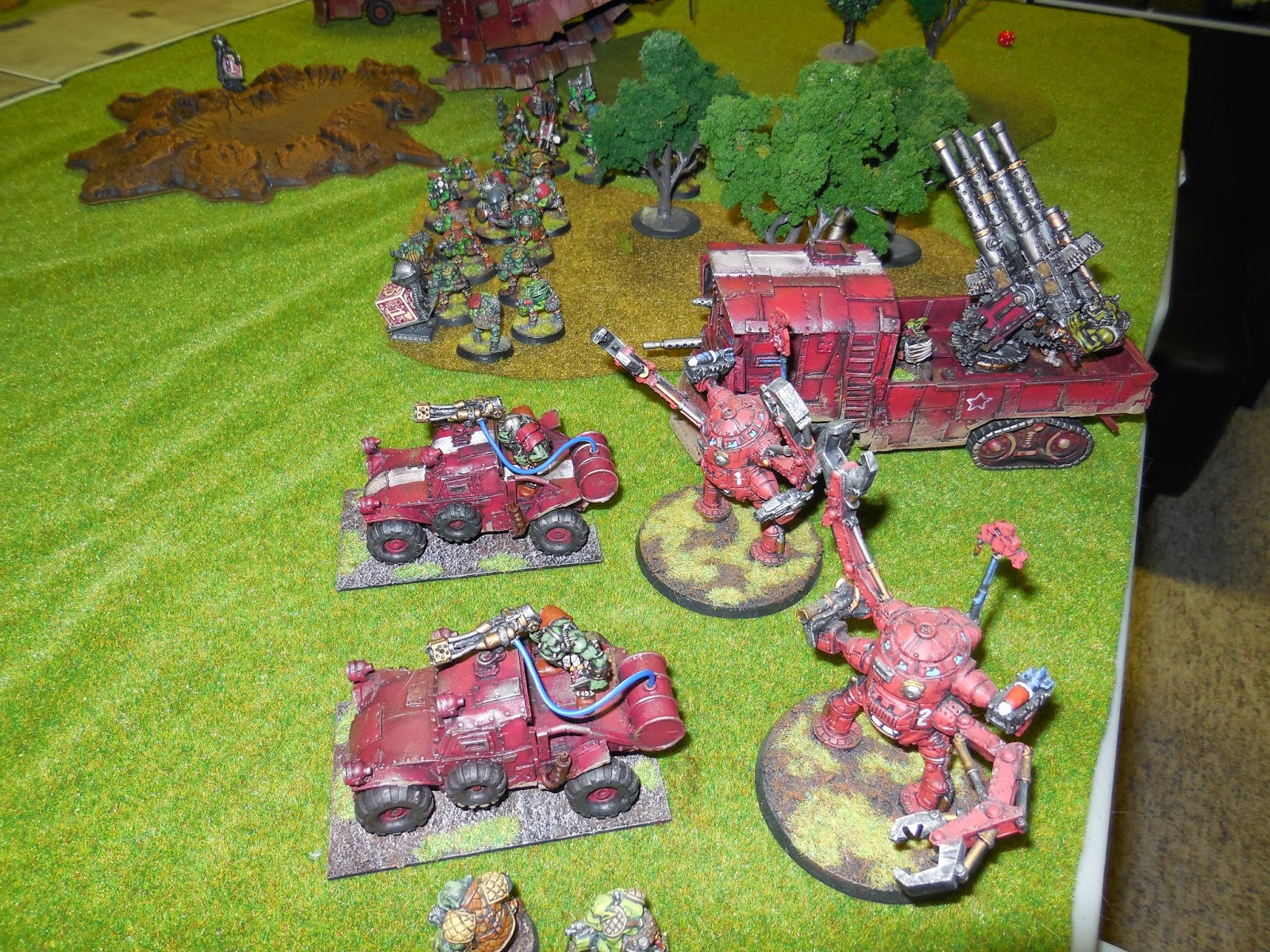 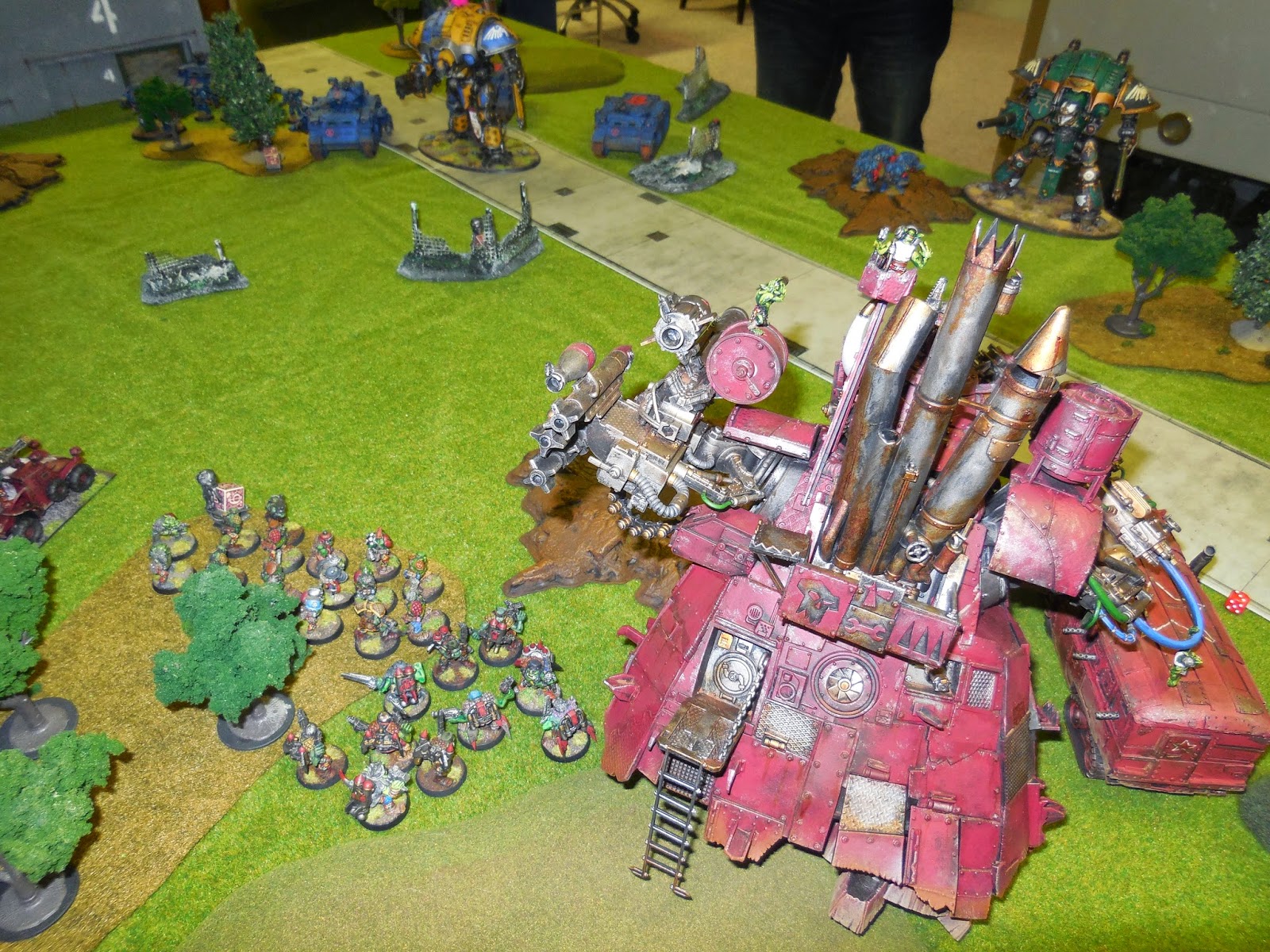 The view from the Ork lines as the Imperials take the first turn. 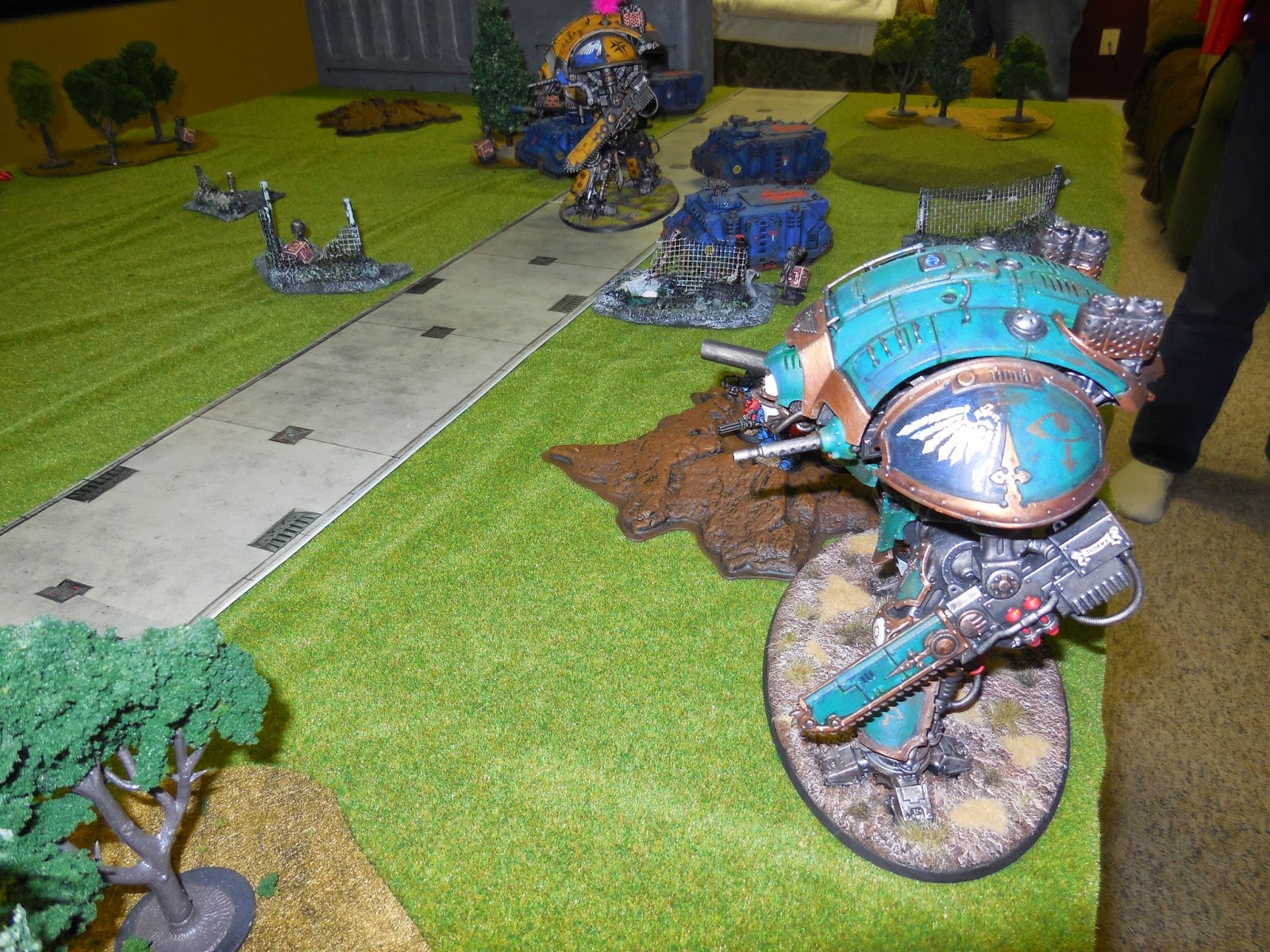 El Booze and the Blue Bomber anchor the Imperial line. 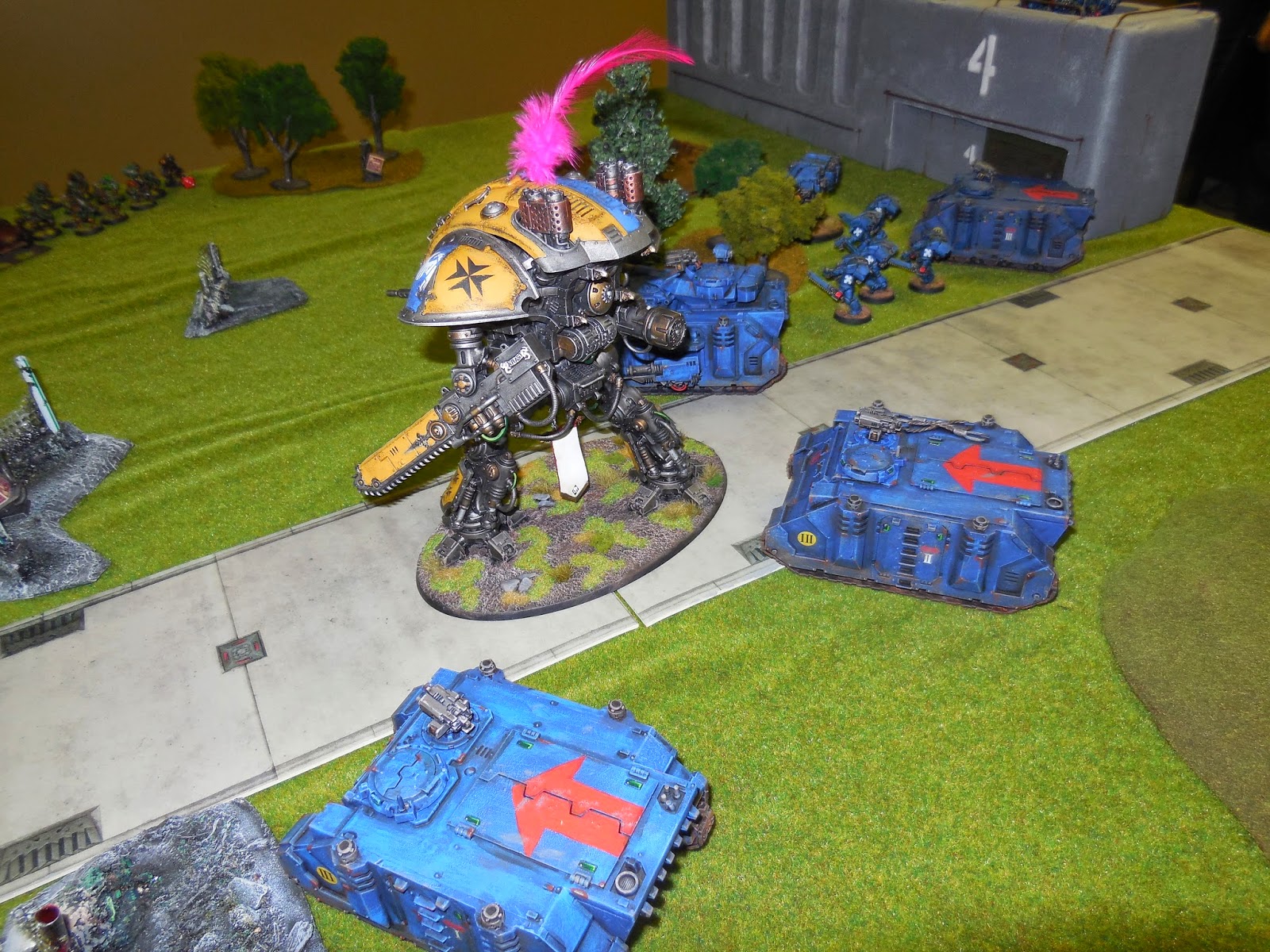 Rhinos move up covered by the Knight. 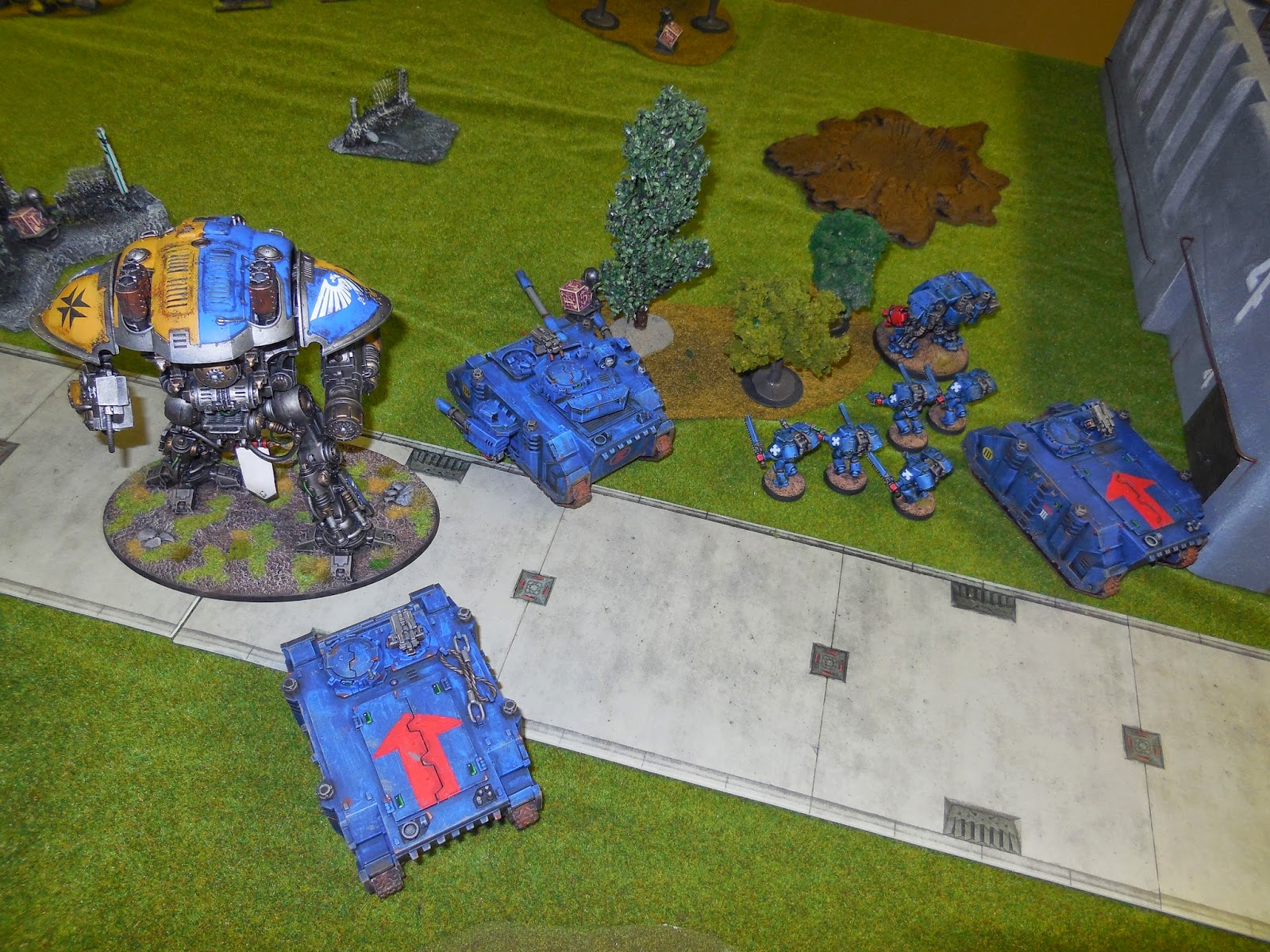 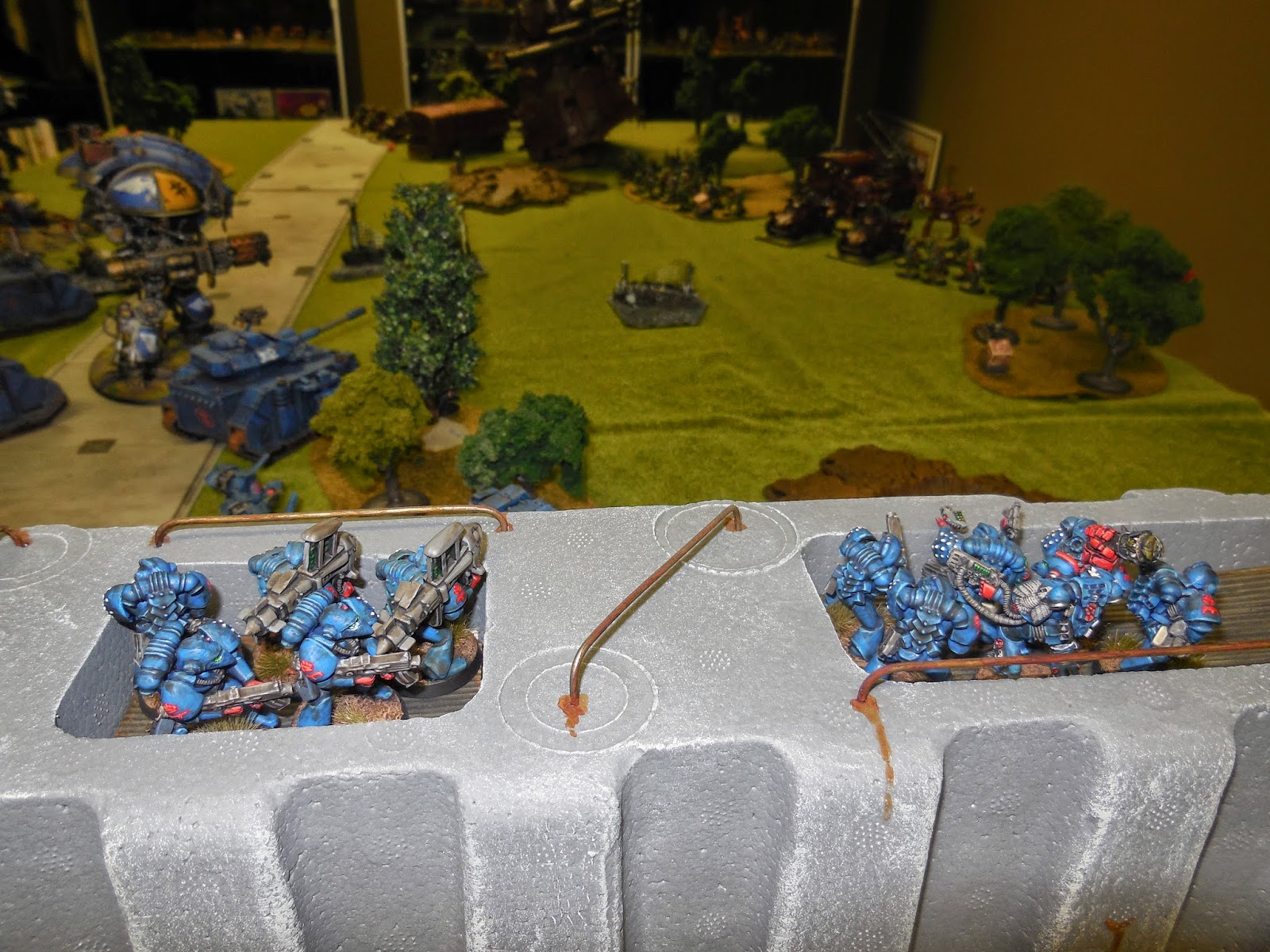 Crimson Fist Devastators rained a hail of missiles down on the Orks. 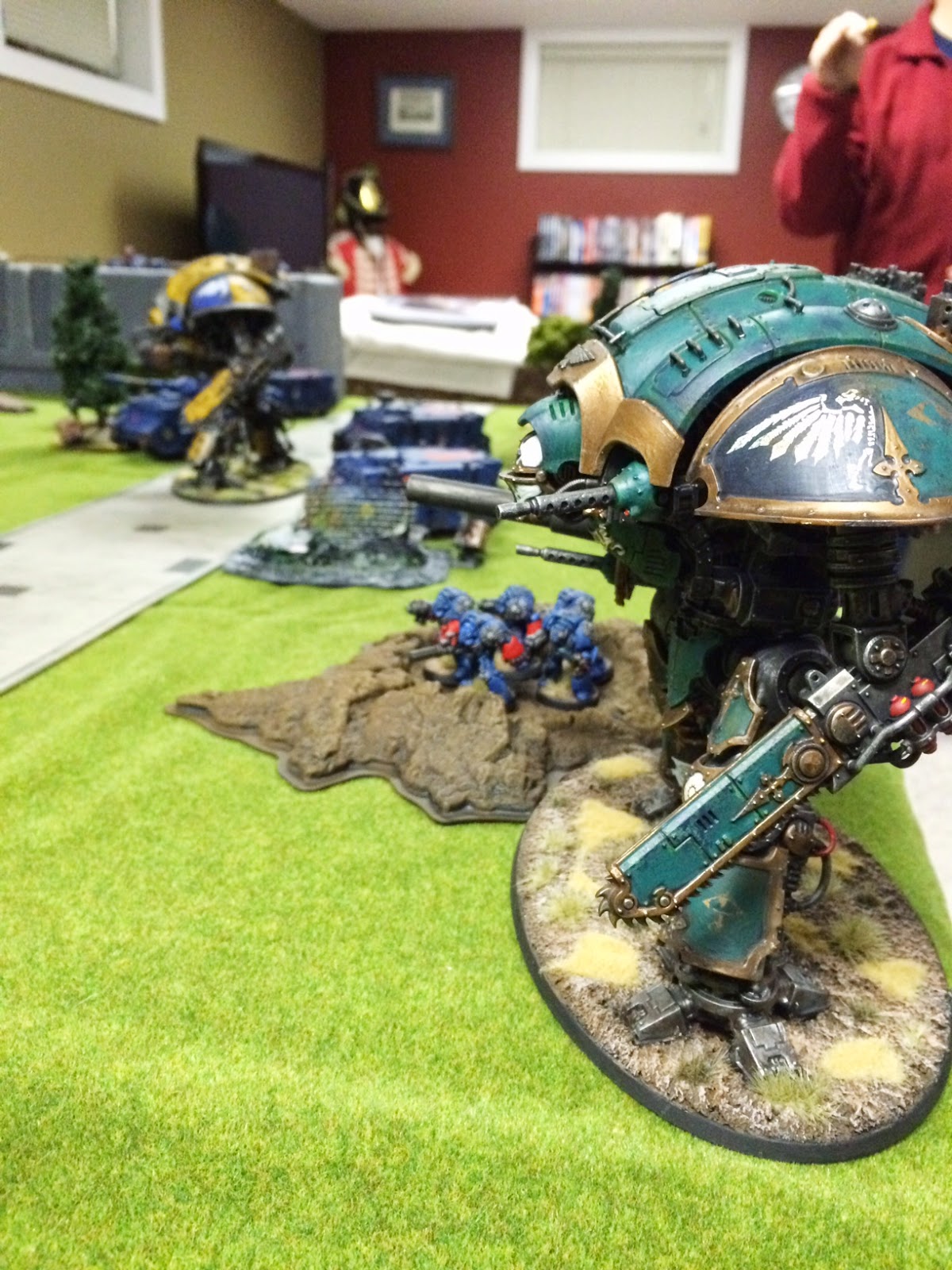 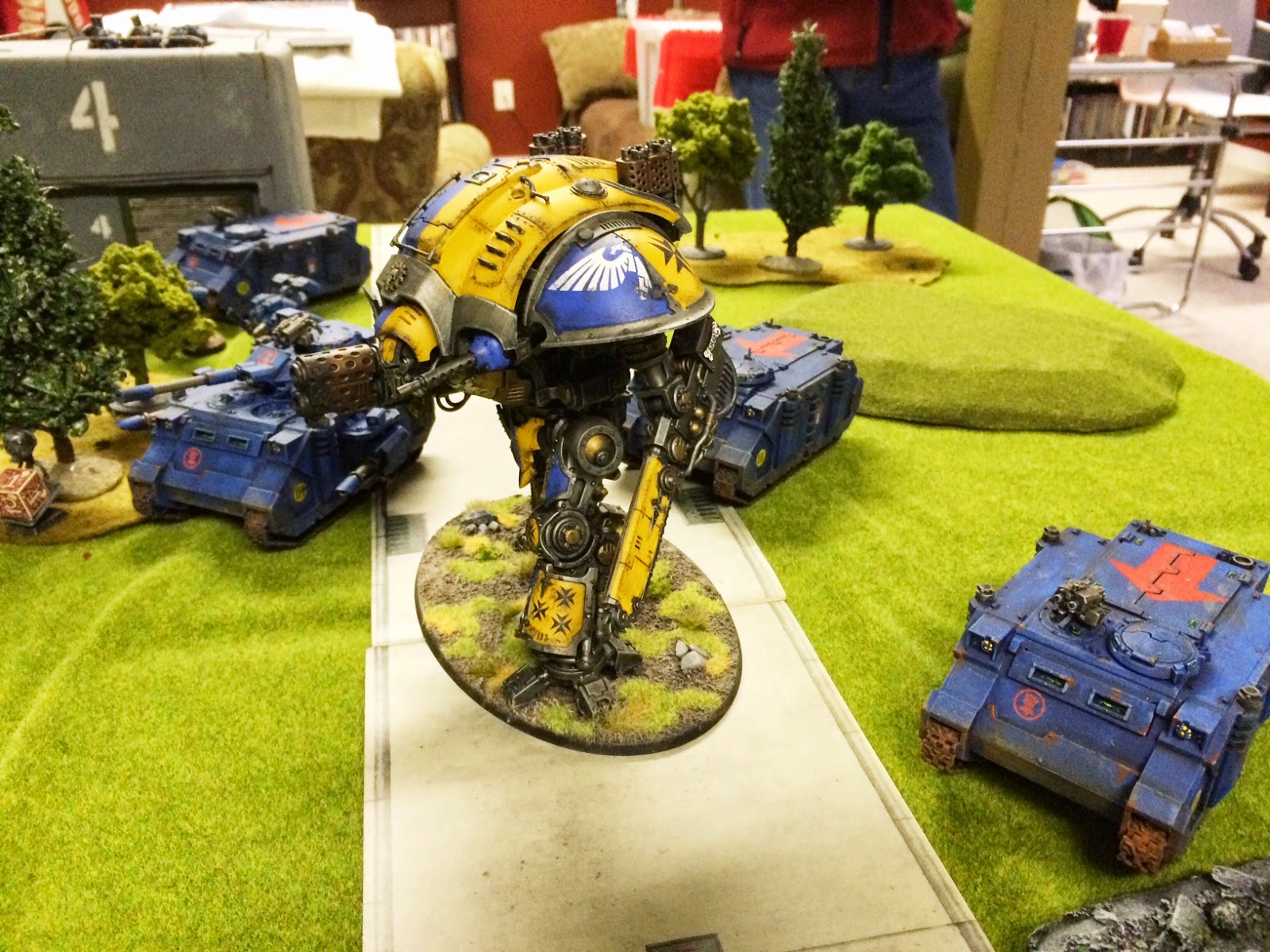 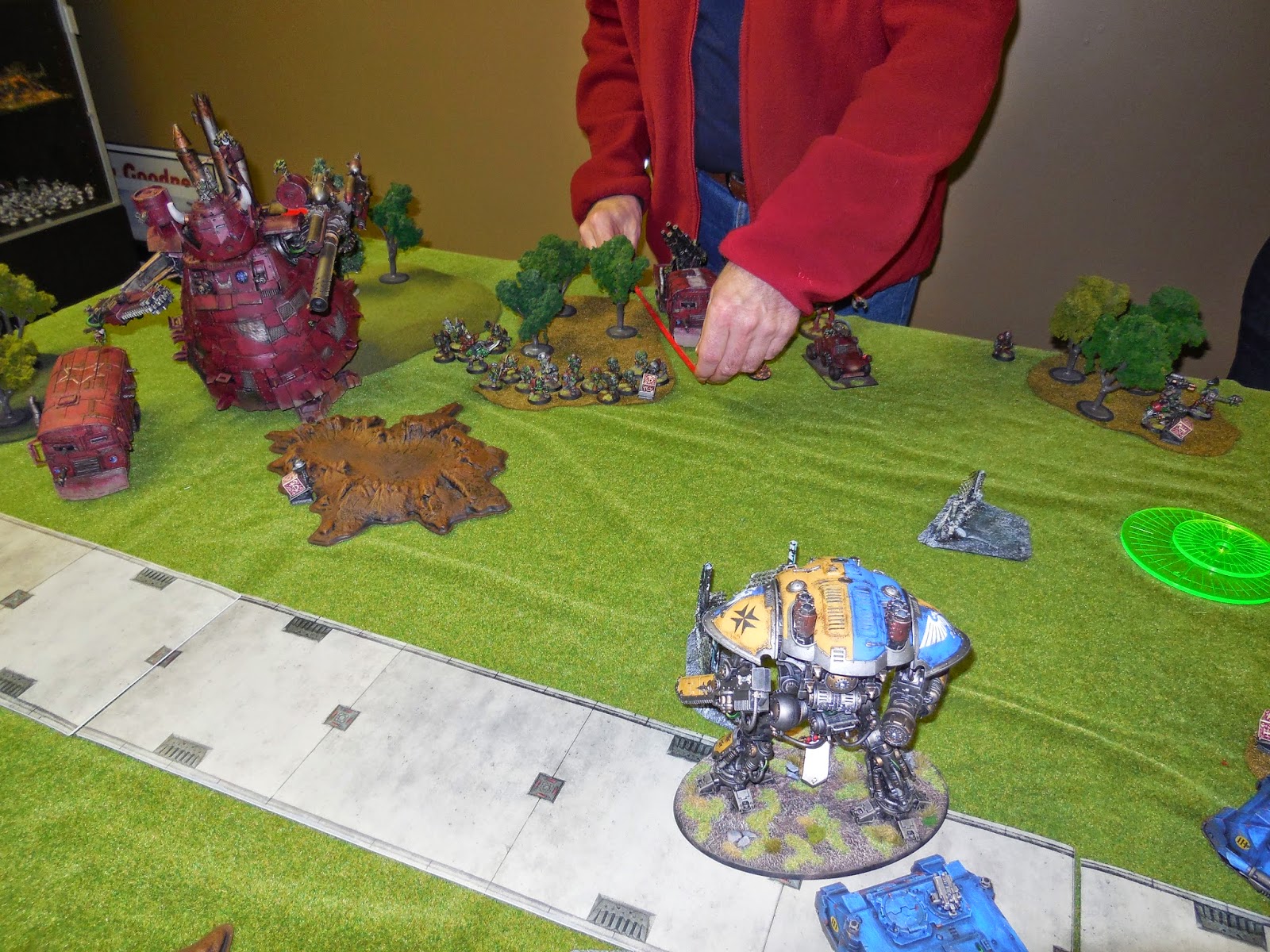 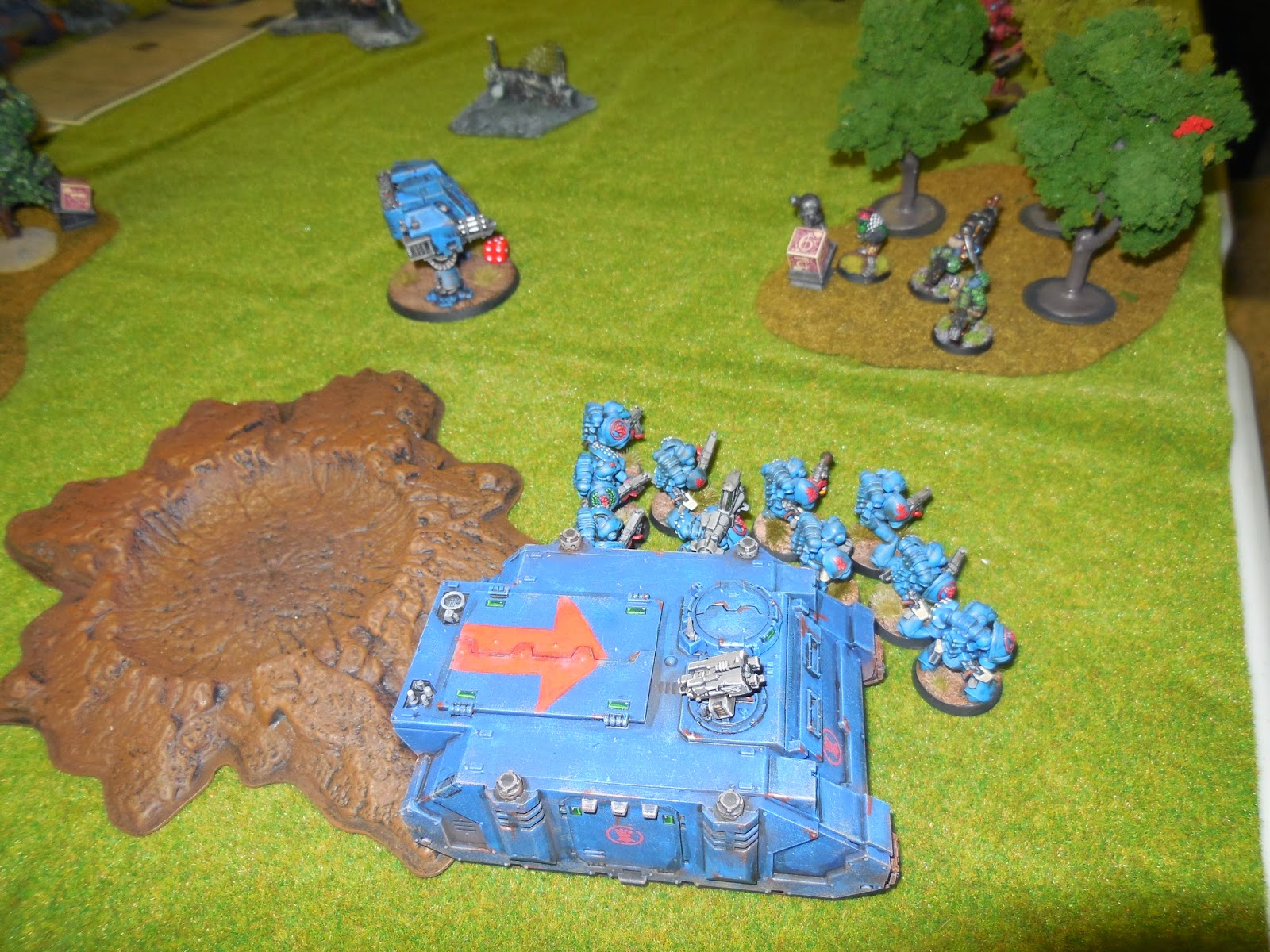 After whittling down the Kommandos with Devastator fire, the Marines disembark to prepare for the assault. Dreadnought has had its powerfist knocked out. 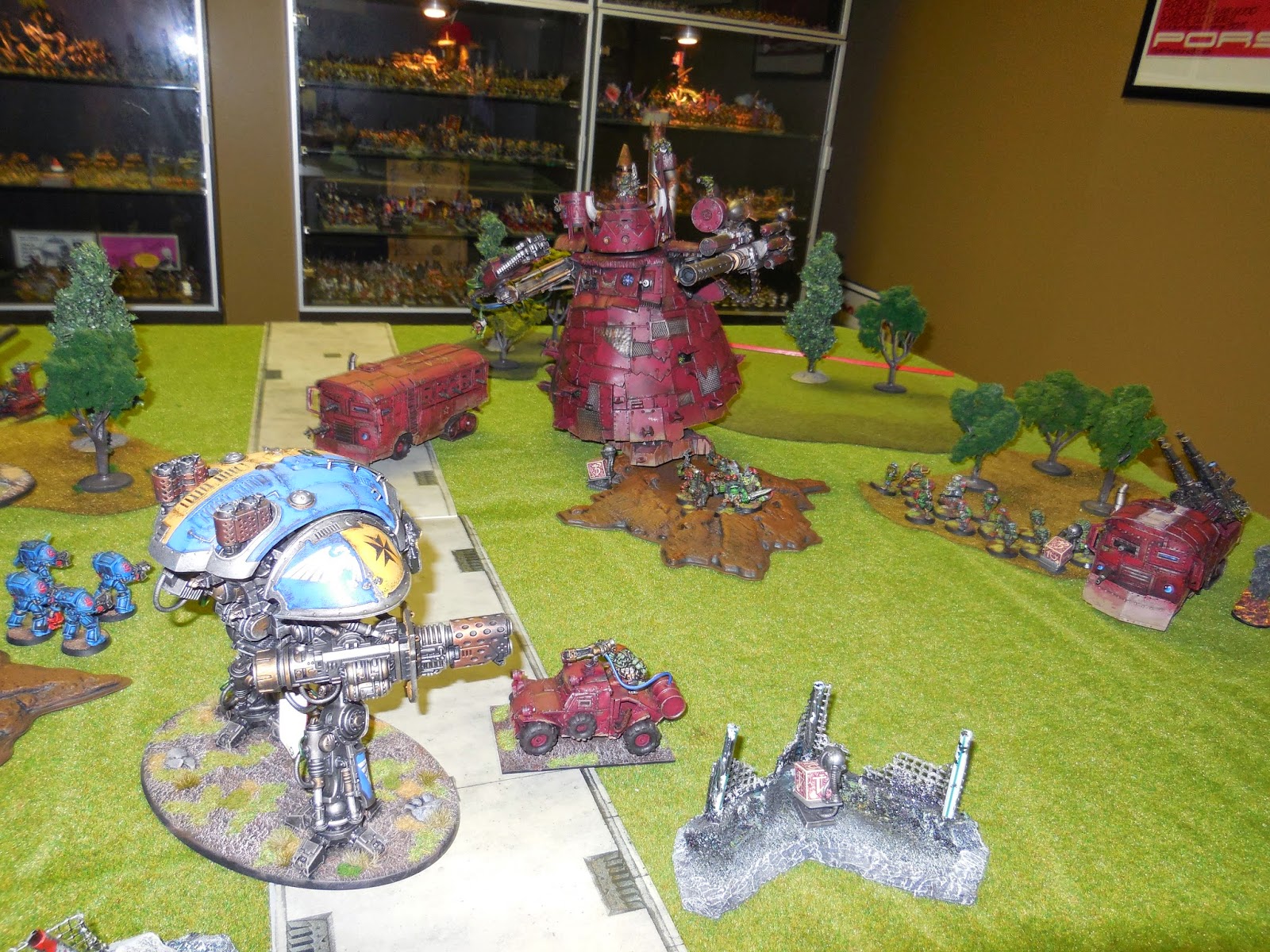 Warbuggy on a suicide run at the Knight. "Can a vehicle with no weapons do anything?" "Sure, you can ram things..." 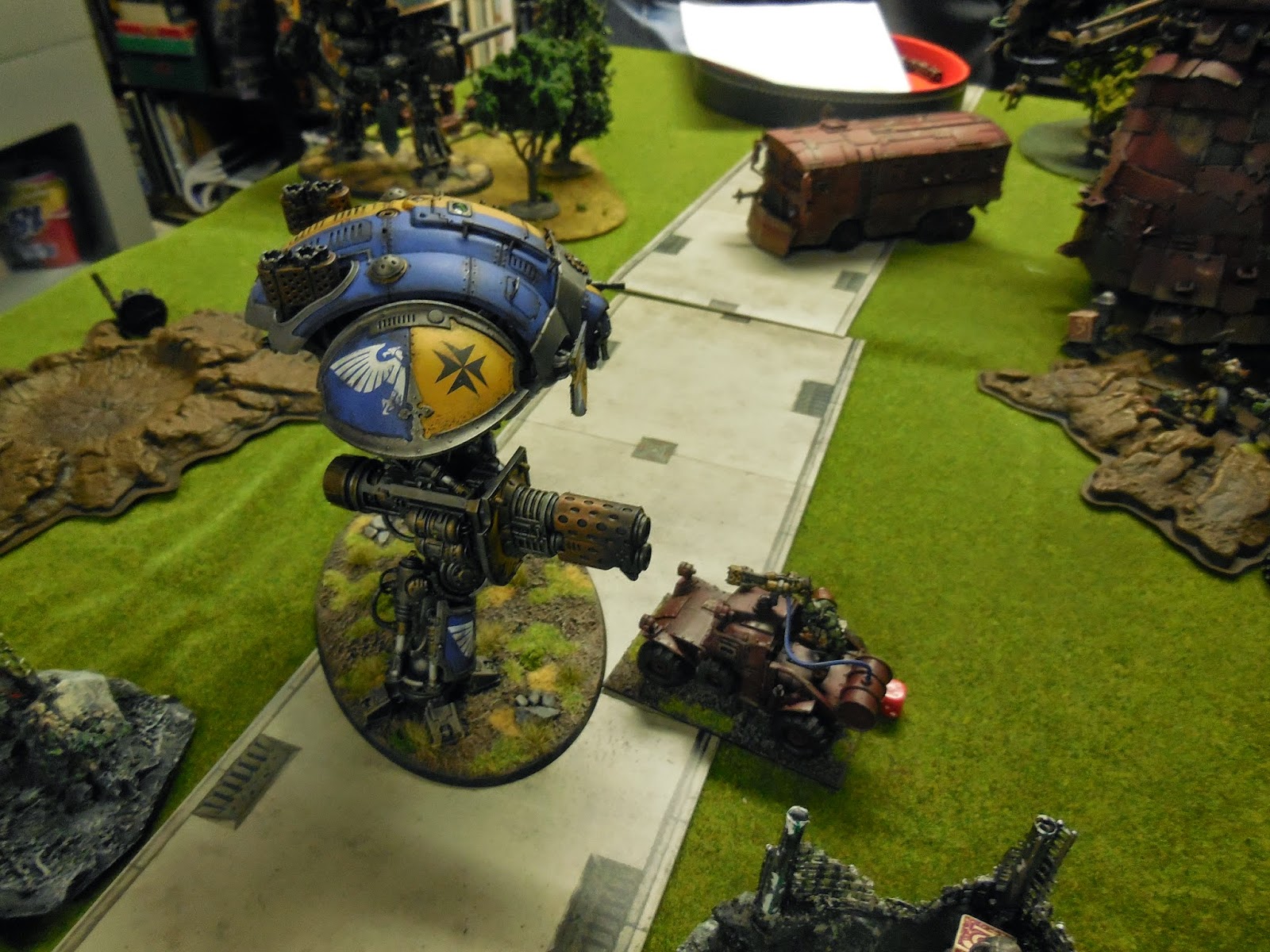 Aaaand this goes pretty much as expected... 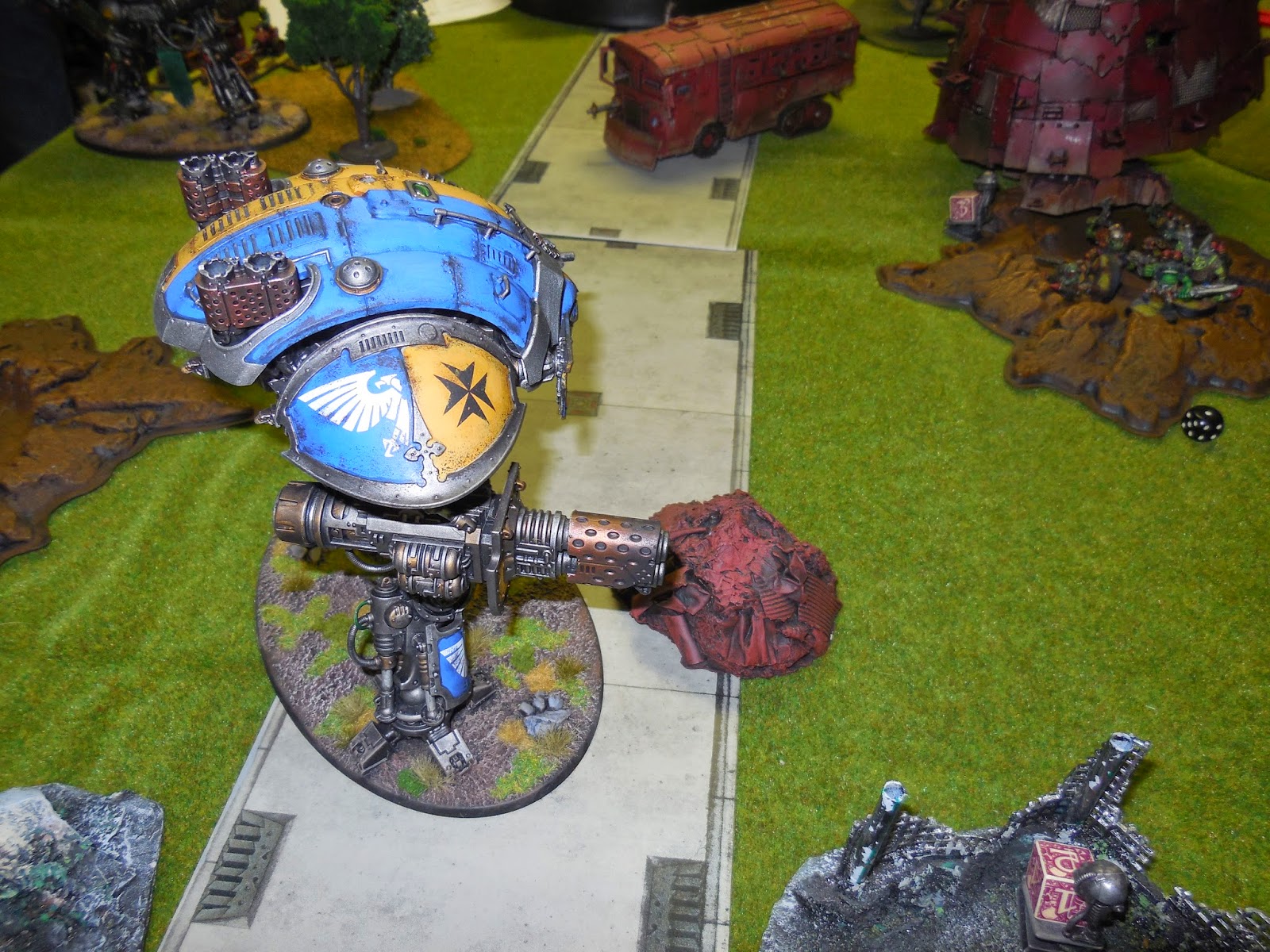 One pile of slag. 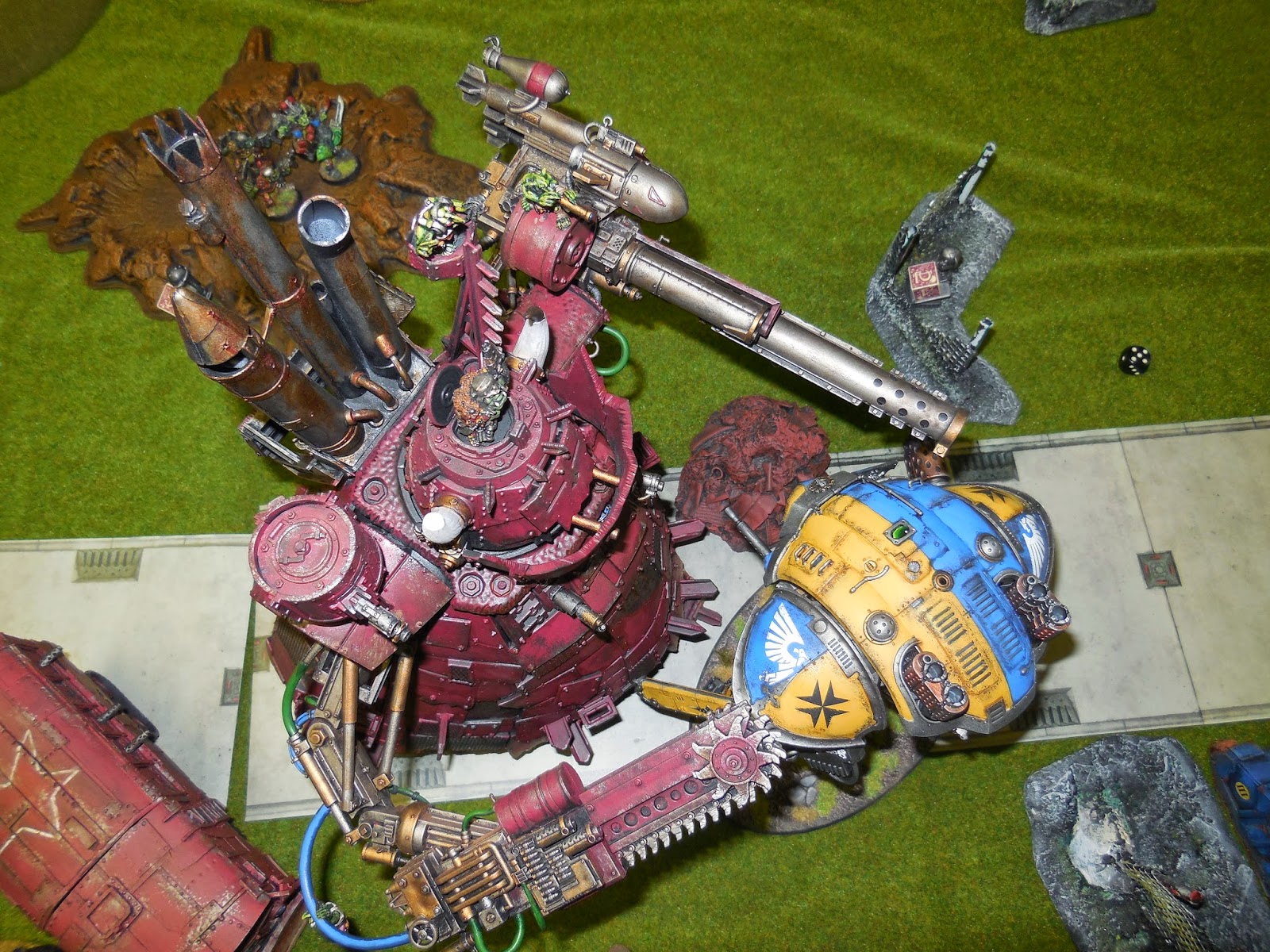 After lighting up the Predator with its main gun, the Stompa gets to grips with the Knight. I was actually feeling pretty good about this. 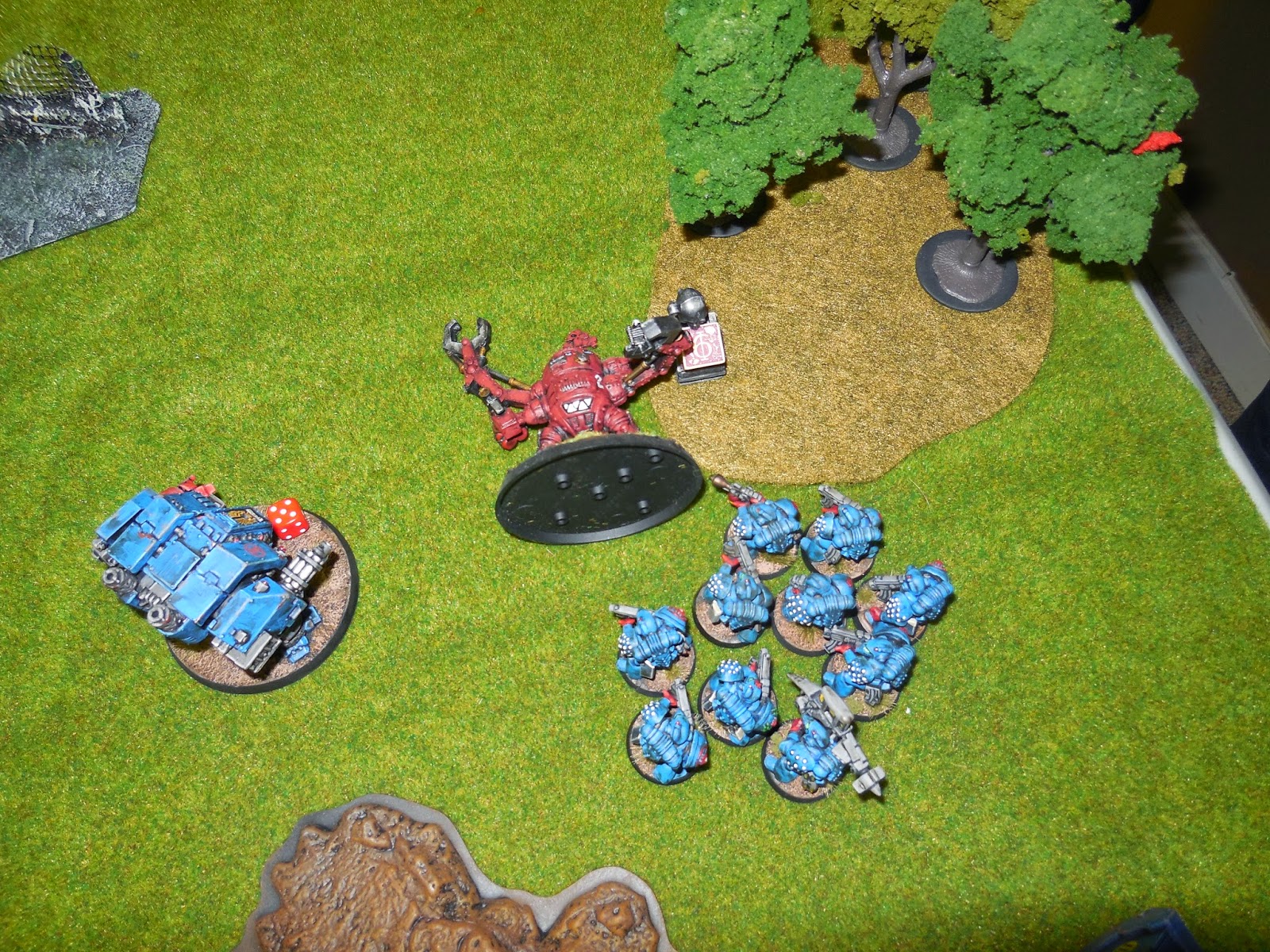 Over on the other flank, things aren't going that well. The Deff Dread charges in only to be felled by Marine krak grenades before it can swing a power klaw. 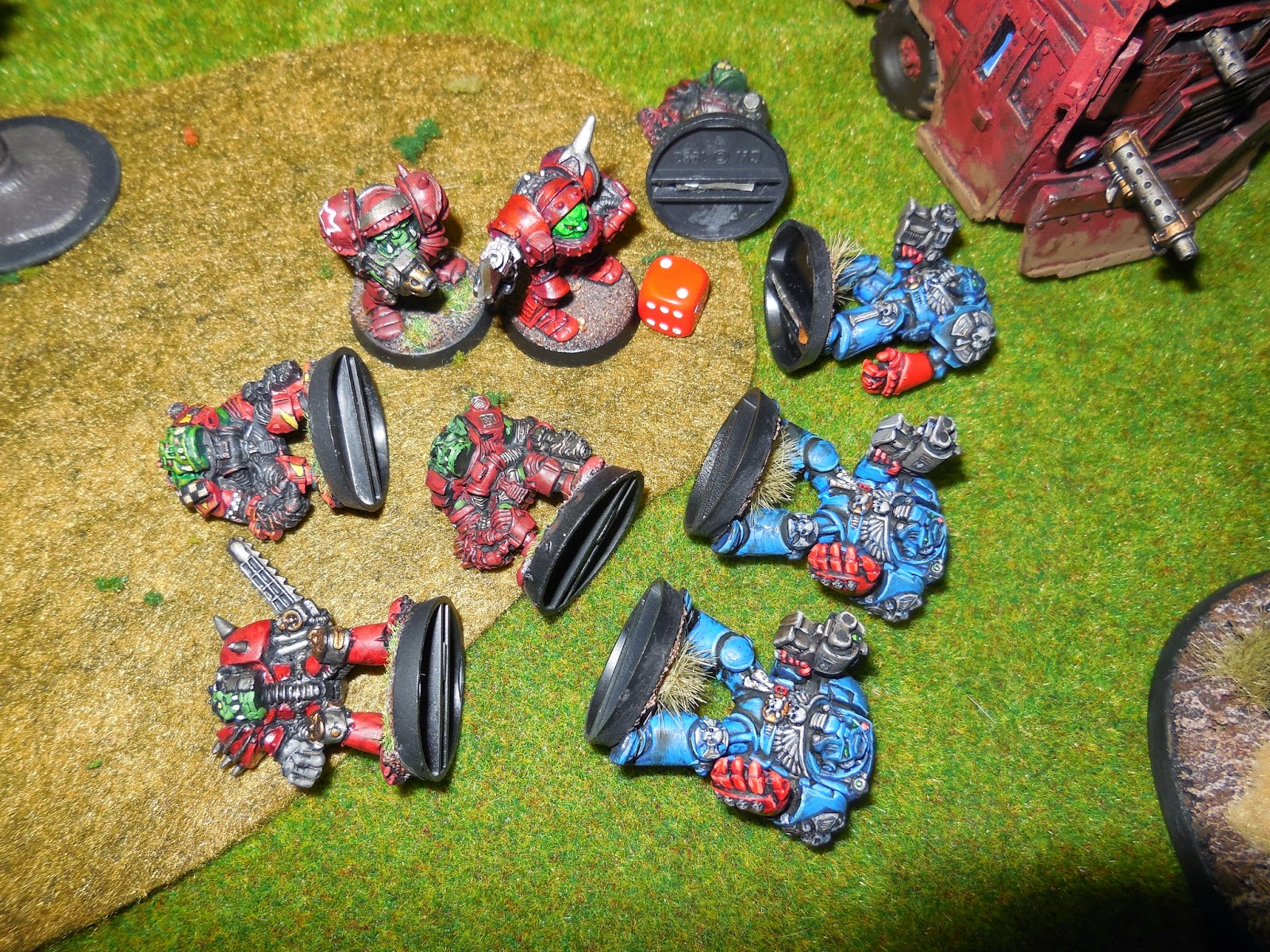 The three remaining Terminators had leapt forth from their crater to charge Thrugg and his mega-armoured ladz, who themselves had disembarked their transport to try and get some attacks in on the nearby Knight. The Crimson Fists died to a man but took down all but Thrugg and his faithful lieutenant. 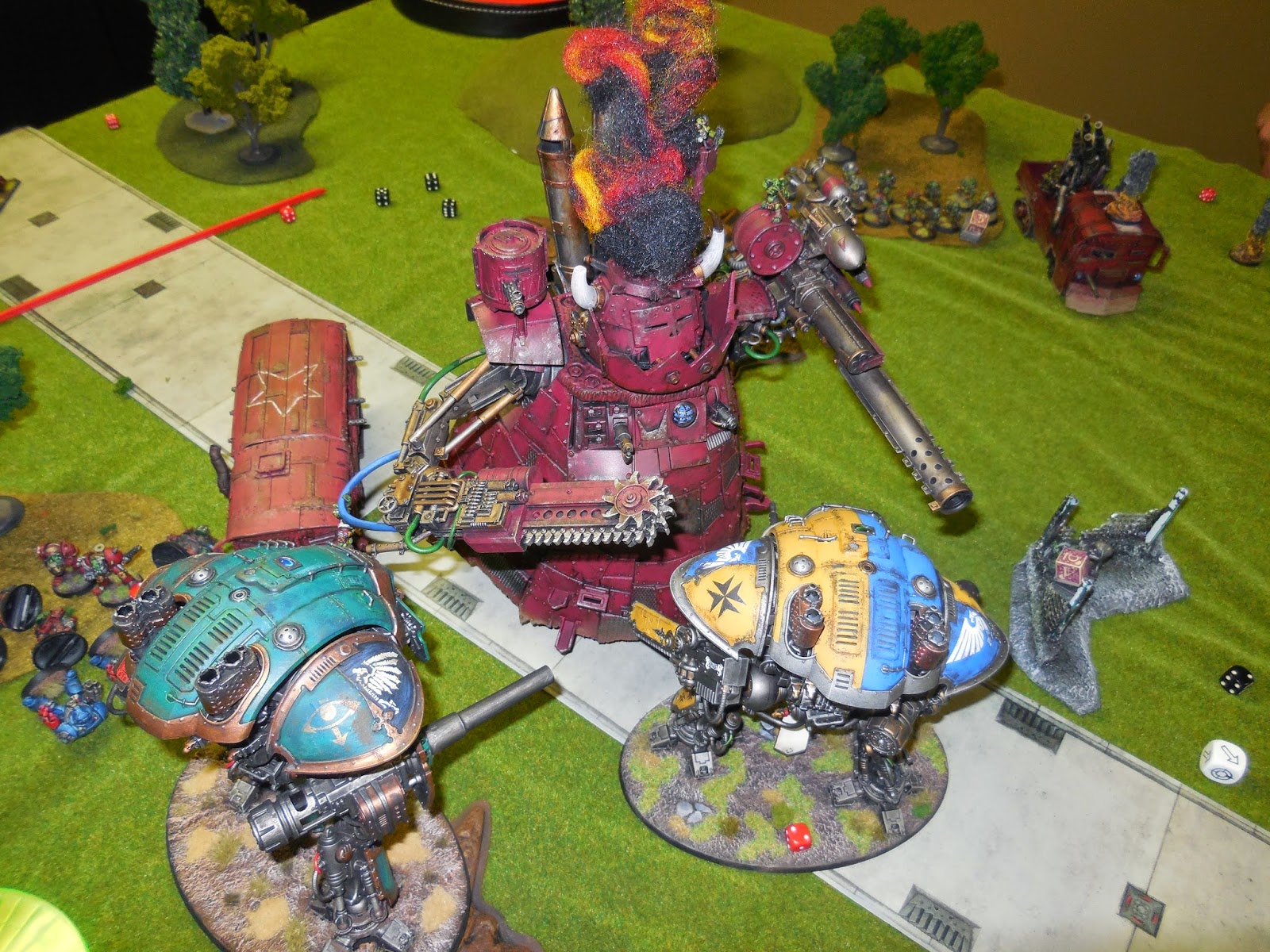 Unfortunately for the Orks, their ace in hole ended up as a smoking one. The Stompa whiffed on its first hit on the Bomber (rolling a "1" on the damage table)... the next turn, El Booze charged in and between it and the Bomber they beat the Stompa's azz into a shiny red pulp :-( 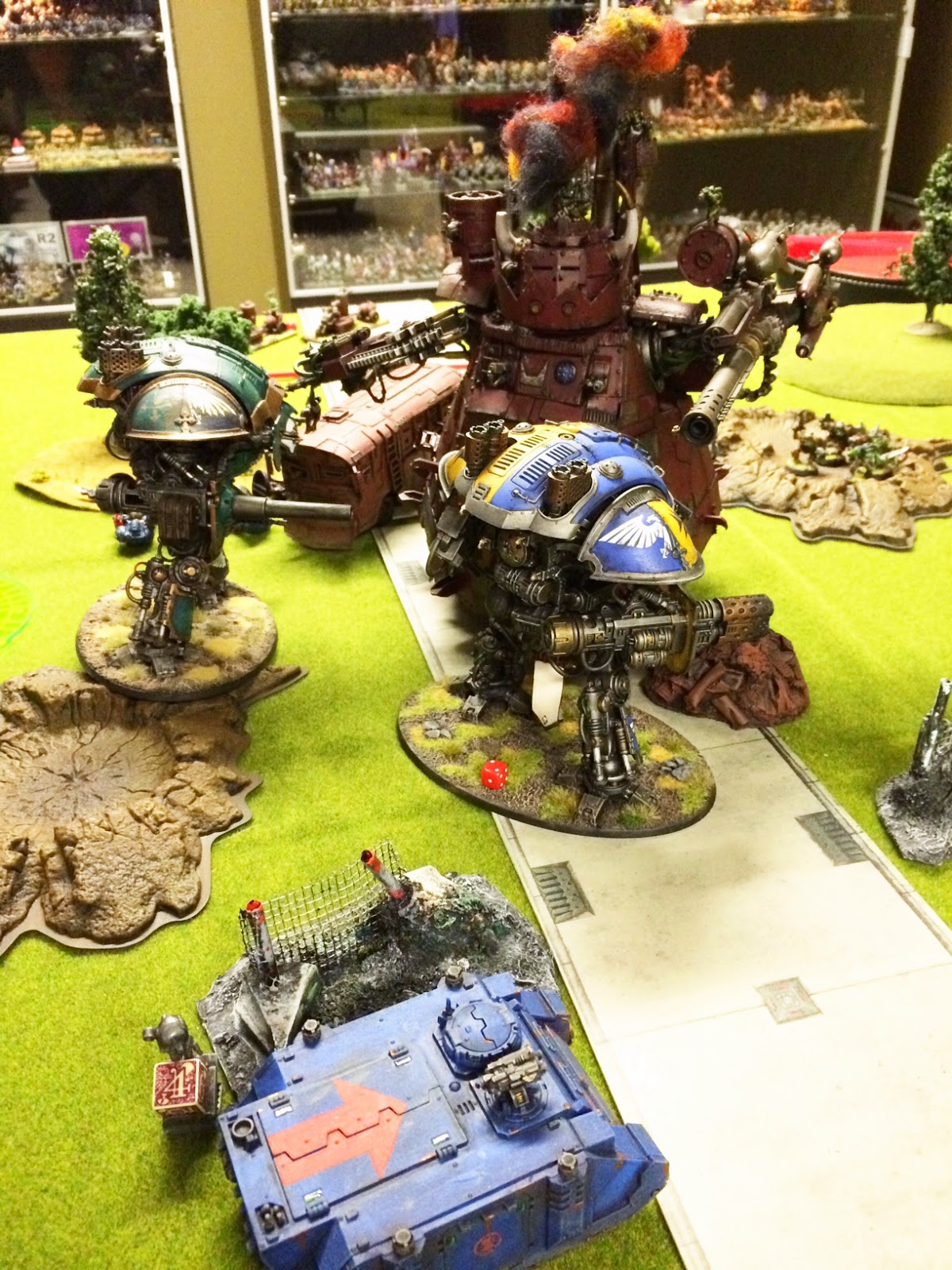 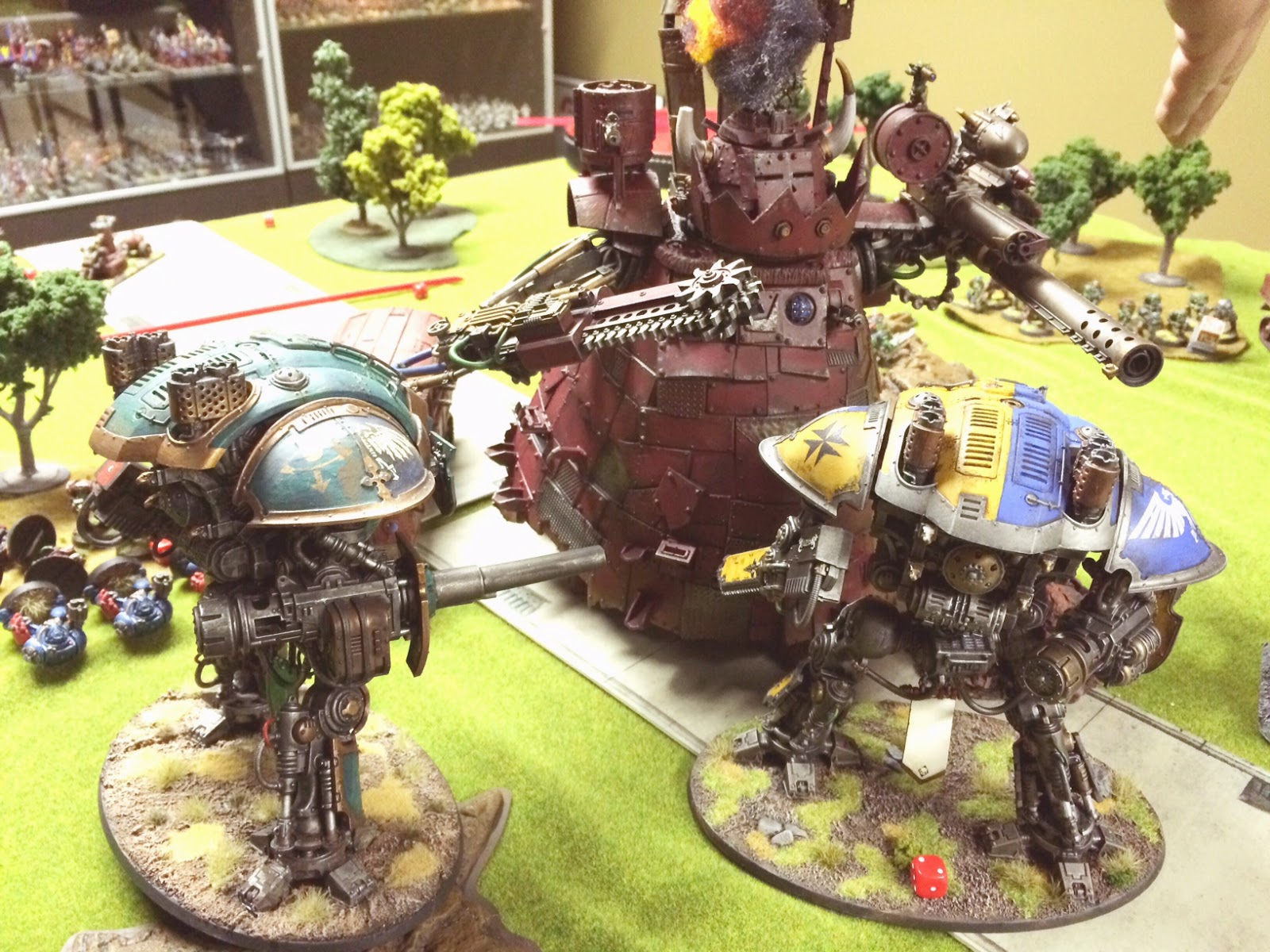 So while the Stompa went the way of all newly painted models, at least the Knights scored a massive kill on their debut by putting down the Stompa. We also realized what a poor matchup my Ork army is against Space Marines. I'd need a ton more Boyz, but I don't really feel like painting more figures. The list seems to match up much better against Imperial Guard... or in Rogue Trader games :-)

Anyway, it was fun and the fight for Rynn's World has been won by the forces of the Imperium. But I'm sure the Stompa will be back!

Playing on the Marine side, I can of course report this was a lot of fun. Dallas is quite right - the gaping flaws that have grown worse over time have rendered the Orks almost useless against Marines unless you paint some untenable and bonkers number of them. Rogue Trader is a much better way to play a Marines vs. Orks game.

But it was super cool to get the big walkers on the table!

Port the knights and stompas back to Rogue Trader?

Looks like a great time was had, and really, that is the point of this silly hobby.

@Lasgunpacker - well said :) but we usually find that we can "hybrid" the current vehicle rules into the game, and it works quite well - with that, the Stompa and the Knights could join a Rogue Trader game some day :)

Beautiful! Thanks for sharing the report and pics!