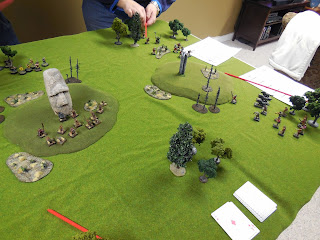 In accordance with ancient custom, once again this year I hosted a game on New Year's Day, accompanied by a delicious lunch prepared by my wonderful wife. One of my recent obsessions has been old-school fantasy gaming a la "Oldhammer", so for New Year's 2014 I decided to run a fantasy game. I wanted to run a multi-player game that would get everybody involved, so I picked GW's "Mordheim" for the rules, and set about designing a basic scenario and some 500gc warbands for the boys to push around. 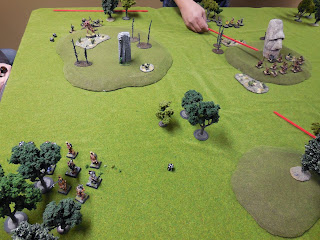 The backstory to the game was this: on New Year's Day, the magical energies of the Old World are at their peak. At the edge of the Chaos Wastes, warbands of adventurers gather to tap the mystical energies of the ancient standing stones. The table is laid out with three such stones. Each turn that a Hero is in base contact with a stone during the combat phase (and is not involved in combat), the warband adds d6 power points to its stock. If the warband's leader is in contact with a stone, the number of points added is 2d6. The game lasts for 8 turns; the warband with the most power points at the end of the game, wins!

Conscripts Greg, Frederick, John, Dave and Kevin came out for the game. Greg brought a Marienburger warband and Dave brought a really cool gang composed of old Talisman figures. John ran a gang of Orcs and their pet troll, Frederick took an Undead gang, Kevin selected Chaos Warriors, and I ran my newly painted Oldhammer Skaven - no model newer than 1987!

Frederick jumped out to an early lead that was unassailable - his Vampire moved very fast and his die rolling once in contact with the stone was astounding. He ended up with 30 points. His opposite number, Greg, had to leave early so we ruled that their stone had run out of power points ;-) I totally forgot my Skaven boss's "infiltrate" ability but our fast moving got a few models in contact early and garnered me 19 points. Although I whittled away enough of Dave's warband to force a bottle check, he passed the Rout test (with the help of a Bard re-roll at +1) and inflicted enough damage on the rats to force us to check... which I of course blew. Dave ended up scoring 8 points. On the far side, John and Kevin waged a see-saw battle that saw John's Orcs finally crack under the pressure of Kev's elite Chaos Warriors. Kevin scored 8 points and John made off with 5.

Thanks to the guys for coming out, it was a great afternoon spent watching the Winter Classic on TV and playing a fun game. But especially, thanks to Pam for making our amazing "pub lunch" of meat pie, BBQ potatoes and carrots, yam soup and apple peach cobbler. So yummy! And lastly, thanks to everybody who reads and follows our ramblings. It wouldn't make a lot of sense to do this blog if it weren't for you. Have a peaceful and happy 2014!
Posted by Dallas at 12:11 AM

Great AAR Dallas and I really liked the shot of the attendant Conscripts (Pam should be in the photo as well as she's an honorary Conscript to be sure!). Happy New Year y'all!