The SU-100, a surplus beast from the later period of WW2, served in the organic anti-tank elements of Arab infantry and mechanized divisions in both the 1967 and 1973 wars.  These two particular beasts - both Battlefront models - are painted in an Syrian-inspired 1973 camouflage scheme that included patches of yellow and grey over a dark green base.


These models will see action in scenarios where the Syrians are attempting to halt the IDF counter-attack across the "Purple Line" in 1973.

The quality of these Battlefront models is top notch.  They are from a "Guards Tank Destroyer" which includes five tanks, with options to paint them as either SU-85 or SU-100 tank destroyers.  I'm not sure what I will do with the other three - either paint them up for my WW2 Soviets, or paint them in Egyptian colours...we'll see...


The T-55 is from Khurasan, part of Khurasan's new 1973 war range.  While I was not very wowed by the Khurasan IDF infantry, this tank is really, really nice.  The body, turret and treads are all resin, and the accessories - cupola hatches, main gun, IR searchlight, cupola MG, etc. - are cast in metal.  You can build the tank as either a T-54 or T-55. One very unique feature with these models is the fact that you have the option to model the spare external fuel cannisters, common features of Warsaw Pact-era tanks, at the rear of the tank on or off.

The model components are a little fiddly, but overall it comes together quite nicely. Some of the detail on the hull is a little soft, particularly the indentations on the fuel tanks, but overall this is a clean, crisp tank with unique modelling options and a quality in metal accessories.  Well done Khurasan!

If there is any issue with these tanks, it is the size.  They are a touch small - not inaccurate, just smaller than, say, a Peter Pig T-55.  It's just a sniff of the "1/56" effect.  I don't think they would mix that well.  But that's no deal breaker.  These are nice tanks, and you can buy them in lots of ten if, like me, you need T-55s in company-sized allotments!

This is painted in colours that would work for the Egyptian army in 1967, as I am hoping to do some "Fate of a Nation" games.  Yes...Flames of War...you saw it here...but these tanks will also do in a pinch to represent the Egyptians in 1973, or the Iraqi tanks sent to help the Syrians in 1973. 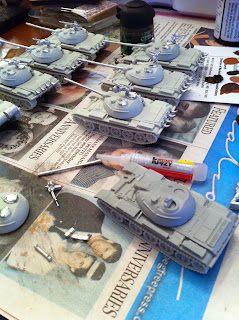 This was just a test model.  No matter what rules I use, I will need plenty of T-55s for Arab-Israli gaming. One tank down, and as you can see from the picture, a lot more to go...

Excellent work dude! I gotta get cracking on those Egyptian T-55s!