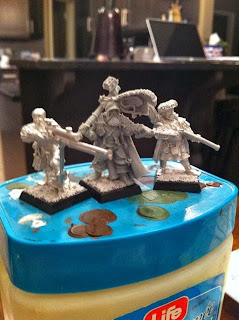 For a few months I have watched Dallas dive more and more into his "Oldhammer" interest.  I did not ever really play 3rd Edition Fantasy, so I can't exactly relate - Rogue Trader 40k is more my retro gaming passion.  But Dallas' interest has inspired me to dust off my relatively old (if not "Oldhammer") Empire force for Fantasy.  I haven't played a game with them since, maybe, 2007 or 2008, I think, and I cannot remember the last time I painted a figure to add to them.  So it should be fun to get started again! I found these three character figures in my pile-o-stuff in the basement, and will paint them up for the Analogue Hobbies Painting Challenge (where I am getting killed).

There are two Empire engineers, and one "Captain of the Empire". Dallas might recognize the Captain in the middle - it was a gift from him! Thanks dude! I often take forever to paint figures I receive as gifts, but I get to them eventually...
Posted by Greg B at 10:28 PM

Looking forward to what you make of them, will it get you itching to play again though?

The chap in the middle is languishing in my pile as well :-)