After struggling with a month of shift work in which morning, noon and night was experienced in a fairly random manner and thanks to some fantastic insomnia while trying to transition back to a dayshift schedule, I've been able to complete the Canadian Infantry of the 4CMBG. All I have left is to finish a U.S. Vulcan for additional air defense and the army is complete. 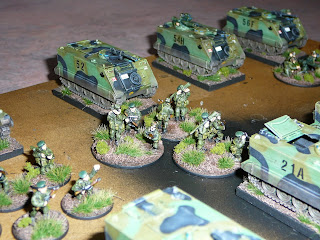 Here is an air defense unit with blowpipe missiles. I hope they don't miss! 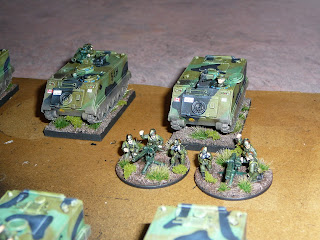 Here is a TOW unit next to an M113 TOW launcher. The M113 TOW is actually from Peter Pig and is supposed to be for a modern Humvee. Not quite accurate, but I love the fact that a dude is actually operating the TOW launcher. 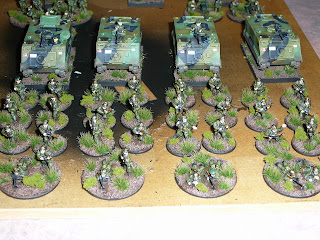 Platoon of infantry and a squad to support the TOW team. 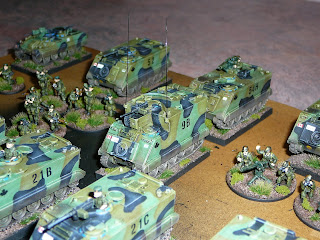 Finally there is the Command vehicle. There is no squad to go with this as I figure the vehicle will most likely act as a marker for command radius and not actually fight. So in all that will make a force of 4 Leopard 1's, a platoon of infantry and support units for air defense and anti-tank. Looks like Greg added some fairly modern stuff (by mid 1980's at least) to his force, so I hope we play with a high troop quality modifier.
Posted by MFraser at 6:07 PM

Sweeeet! Can hardly wait to see those guys in action.

Great looking force. I enjoyed reading as the project evolved.

Beautiful work Mike! Your insomnia is working wonders, keep it up. ;)

These look terrific. I'm just embarking on creating 4 CMBG in 6mm. Thanks for the inspiration!