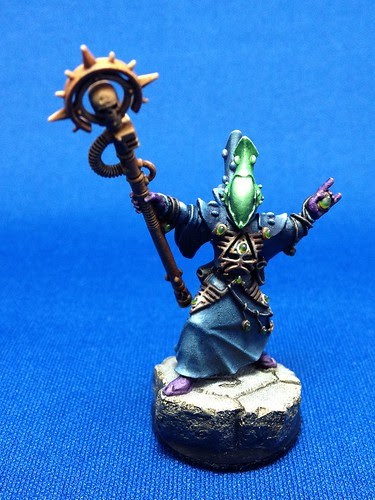 I finally finished one of Games Workshop's newer Eldar models, a Spiritseer, released back in June with the new Codex: Eldar. I really like the pose and the eyeless helmet; such psychic characters obviously rely on senses greater than that required to view the visual spectrum.

It's a Finecast resin figure that required some filling of various surface pits. I also swapped the staff head for one modified from a Grey Knight Terminator force staff. After cleaning up the figure, I pinned it to a 25mm resin base from Dragon Forge Design's Lost Empires line.

The figure was primed black, and zenithal highlighting was airbrushed in with flat white. The helmet, robes and extremities received multiple layers of Citadel washes. The rune armour, gemstones and other details were undercoated in various acrylics and layered in thin glazes of acrylic washes or artists' oil paints. 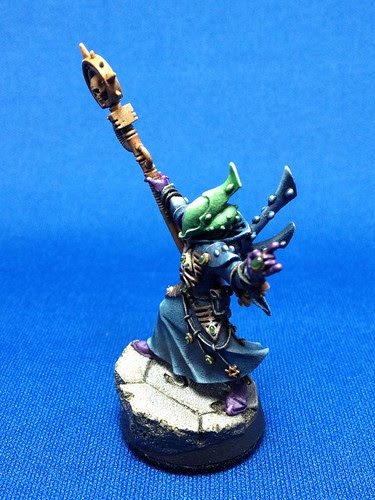 The staff, jewellery and pistol butt were glazed with Gryphonne Sepia and NMM applied. The base also received Citadel washes. To finish, I added some felt to the bottom of the base. 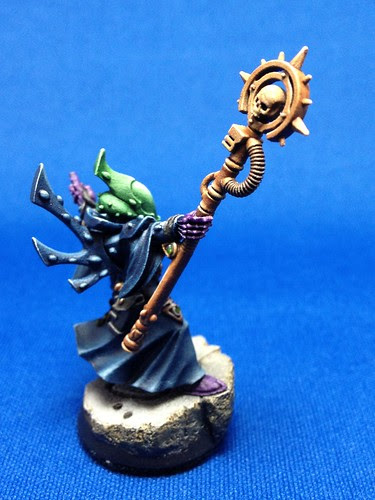 This figure is a bit of an experiment for me, trying to emulate the very high-contrast style of figure painters like Mathieu Fontaine. For example, the helmet received 30 or 40 thin glazes of Thrakka Green to shade, with the highlights punched up with Vallejo brush-on white primer. Very fine highlight points were done using Titanium White oil paint mixed with Liquin medium. I also don't often paint using non-metallic metallic techniques, which I applied here using various brown, ochre and white artists' oils.

I finished this figure just in time for the upcoming 2013-14 Winnipeg Warhammer 40K Beer League. This year I am part of the Craftworld Eldar faction, one of four factions vying for supremacy in a series of games over the next nine months.
Posted by DaveV at 8:59 PM

Not keen on their finecast due to quality but you've done very well there Dave.

Great looking figure, I suppose that given the amount of work you did post filling that it did not add that much more to the job but like said above it's the time of thing that puts me off some figures

Very nice paintwork Dave but I must say that I'm less than impressed with the quality of the casting itself. I can clearly see the resin 'pimples' and it seems to lack the crisp detail that you can get with metal. Seeing the results of these new models in the hands of a veteran hobbyist such as yourself leaves me a little puzzled to GWs decision to go this route with their business. In the end I guess its all about money.

I got the new plastic Farseer model, for example, which is truly beautiful. I didn't paint it yet, since I already have several painted metal ones.

Of the three new character models in the recent Eldar release wave (the Spiritseer, Farseer, and a Ranger named-character), only the Farseer is injection moulded plastic. Both the other models I got had problems with surface pitting and a surprising amount of flash. I had bought a Finecast Grey Knight Terminator character (Draigo), and had to return it for a new one since its sword and shield were miscast.

Doesn't look like metal is coming back anytome soon. IMO, all their new models should be injection moulded plastic.