"Check Your 6!" - Operation Pedestal : Can Malta be Saved?

Operation Pedestal was a British operation to get desperately needed supplies to the island of Malta in August 1942, during the Second World War.

Malta was the base from which surface ships, submarines and aircraft attacked Axis convoys carrying essential supplies to the Italian and German armies in North Africa. In 1941 and 1942, Malta was effectively under siege, blockaded by Axis air and naval forces. To sustain Malta, Britain had to get convoys through at all costs.

Operation Pedestal started on 9 August 1942, when a convoy of 14 merchant ships sailed through the Strait of Gibraltar, protected by two large forces of British naval vessels.

The game at Dallas' last Thursday night, June 11, recreated a portion of the action that occurred on the afternoon of August 13, 1942. All the model aircraft used were 1/144 scale. 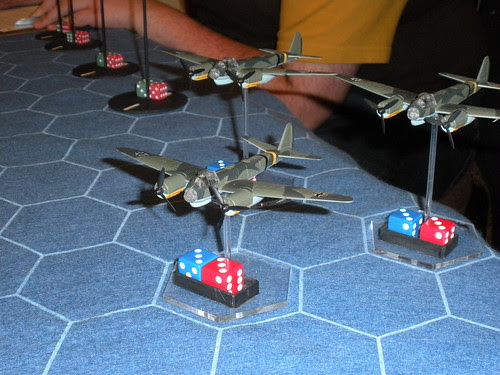 Kevin's bomber flight was escorted by a flight of Bf109Fs flown by Greg. Each element had a +1 wingman, and was led, respectively, by a +3 ace and a +2 veteran. 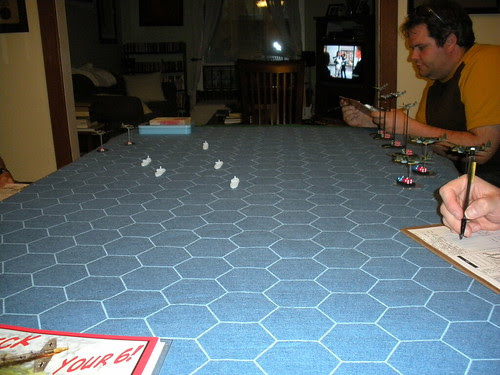 In defense, a flight of 4 Spitfire Vs from Malta flew cover, a pair of planes each run by Brian and Dallas. Their pilots' skills were the same as the German fighter pilots, although the British ace had only 8 machine guns as armament, no cannon. 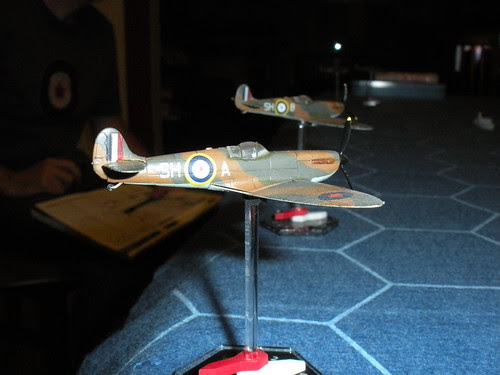 The object of the attack were five merchant ships (all scratchbuilt by Brian), controlled by the British players. The German bomber flight has penetrated the cordon of British naval escorts and is on its final attack run... 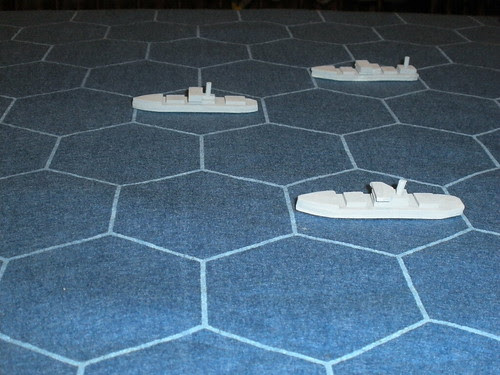 The trailing ship, the tanker SS Ohio, was reduced to half speed, having already been hit at 1050 hours that morning. The lead ship and the SS Ohio had light AA gun batteries. The SS Ohio was counted as having two batteries, representing resolute American volunteers from the recently sunk Santa Eliza manning the guns.

The flight of JU88 bombers started in the middle of the northern table edge. To the west Greg placed the escorting fighters. The RAF flight came in from the southwest and southeast table quarters. Below, the convoy steamed eastward. All action took place at Surface CAB low. No diving out of the fight!

The German bombers flew southeast toward the lead of the surviving merchant ships. Their fighter escort was a little behind and to the west. The RAF Spitfires all headed northwards in the general direction of the bombers. 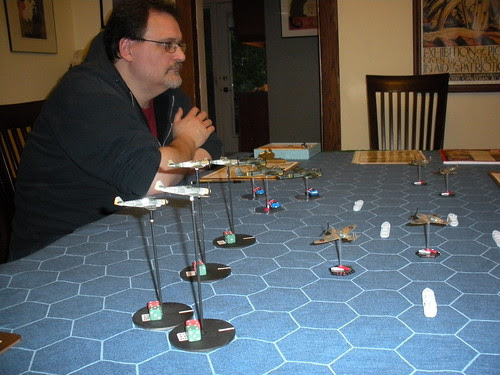 The bombers descended slowly right to the deck, angling for the lead vessel. Anti-aircraft fire rose up from the lead and trail ships. The Spitfires tried a shot but failed to do anything. The Bf-109's scored a lucky hit on Brian's wingman. 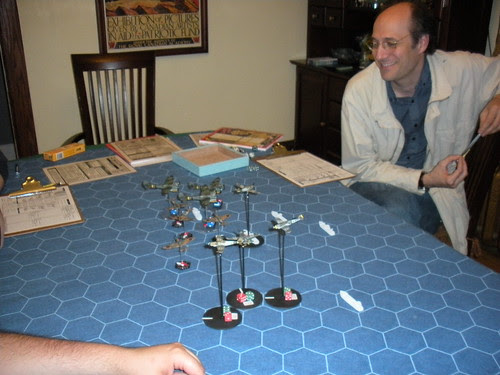 The action soon hotted up. Mistaking one of their own protectors for the enemy, the gunners on the SS Ohio accidentally shot down Brian's wingman! The other German aircraft let loose several long bursts, scoring lucky hits on Brian's other Spitfire, setting it on fire. The long experience of the Luftwaffe bomber crews was evidenced by two bomb hits, cutting the speed of two stricken vessels in half. 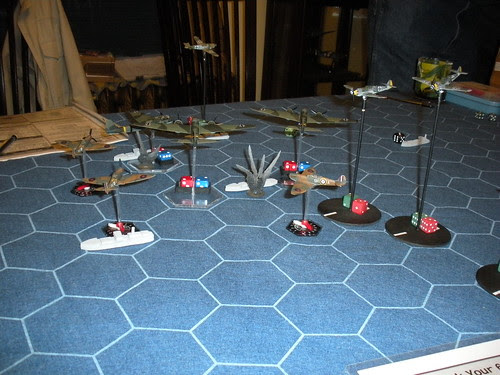 The third bomber then took over the lead of the flight, banking west in a run against the SS Ohio. Greg's fighters tailed Brian's remaining plane as its pilot desperately tried to bring his Spitfire to bear on the bombers. One of Greg's fighters ran out of ammo. Brian's pilot failed his piloting check and crashed into the sea. Meanwhile, Dallas' ace let loose a long burst into a bomber, but his bullets failed to score any significant damage. 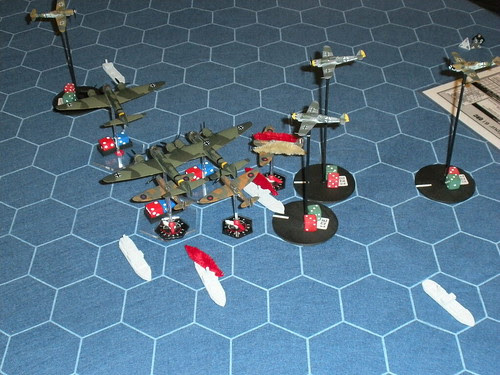 Sensing that he had a better chance of damaging the Luftwaffe fighters, the British ace Immelmanned around and shot up a surprised Bf-109, setting it on fire. The German fighter fired off a burst in return, failing to damage the RAF plane. The other two German fighters attacked a Spitfire whose sights were set on the last bomber; the Spitfire suffered frame damage from the German cannon shells. A burst of cannon and machinegun fire from the British fighter failed to hinder the Luftwaffe bombardier's aim. That worthy landed his stick of bombs right on the Ohio, leaving it dead in the water... 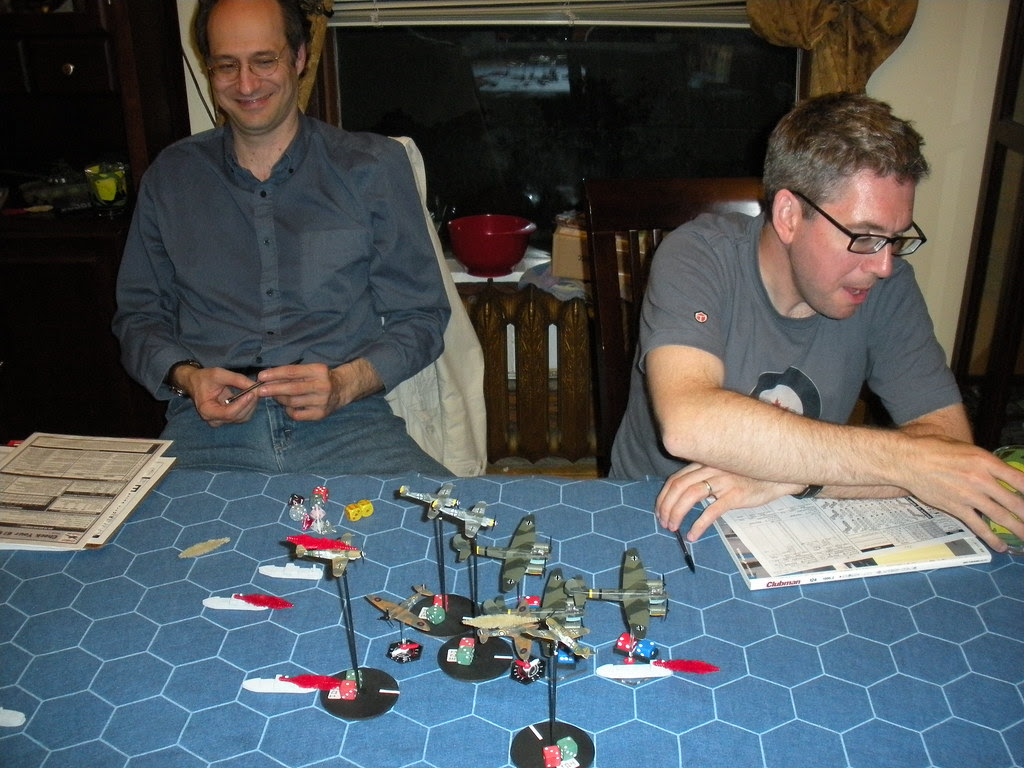 The game was then called. The only way the German side could have been more successful was if they had managed to sink one of the ships, either by concentrating their attacks on a single vessel or by sending the fighters down on the deck to try and strafe. (Historically, fighters from Malta were fired upon by the convoy in confusion because communications between the convoy and the RAF were out. In the end, only 5 of the 14 ships made it into Malta's Grand Harbour. Last to dock was the wounded SS Ohio, which had to be towed in, but whose cargo of precious fuel kept Malta in the war.)

Thanks to Dallas, Brian, Greg, and Kevin for playing. It was a really fun game to run. In after-game discussion, we raised the possibility of adding another pair of defending Spitfires, and a pair of Stukas. In due course I shall write up the scenario in proper CY6! format, encompassing these various options.
Posted by DaveV at 7:40 AM

Sounds like it was a pretty tough mission for the RAF (about right for Malta!), great write up!

On behalf of the German fighter squadron, I am honoured to present the crew of the Ohio with a Luftwaffe citation for bravery and accuracy with their outstanding AA gunnery....

That looks like an awesome game!
I just recently got my Dad (Chris Higgins) into Wings of War. But I'm sure we'd have a blast with this.
Is the game called "Check Your 6" or was that just the title of the blog?

It was tough all right... I ran two Spits (call signs SH-T and SH-Z) that were known as "sh*t" and "shizz" respectively...

Thanks for running the game and posting the report, Dave!

I'd been wanting to run another CY6! game for awhile now. The next iteration of the scenario will grant the RAF the possibility of having teh ace "Buzz" Beurling.

Truth be told, on those occasions when I actually get to run my Spits, I try to choose SH-T as my flight leader.

Sean, the games is indeed called "Check You 6!"

Here are some links:
http://mysite.verizon.net/fisherts/skirmishcampaigns/cy6/

I have the Battle of Britain campaign book, and found it very useful. Note that a future book is a Malta campaign.