The second game was an interesting exercise in timing and distance. The opposing forces were Fabio's Chaos Space Marines:

Lots of redundancy and resilience.

Scenario: Victory Points game. It was a desert table with some ruins and low hills scattered about, and an obelisk in the middle of the table. The entire board was subject to Night Fighting for the ENTIRE game. Also, there were three Ambull models available; they're Monstrous Creatures dating from RT days. Every turn at the top of the turn, any Ambulls not in play (including those killed earlier) would appear 6D6 inches from the obelisk, in a random direction, as they burrowed up from underground. Any units in contact would be assaulted, otherwise they would move normally in subsequent turns. Killing Ambulls wouldn't even score an victory points - they were a spoiler for both sides. Fortunately, their presence didn't alter the outcome of the game.

This was an interesting tactical problem. Night Fighting really limited both side's long range firepower. The vehicle-mounted Death Guard would be very good up close, and had a ~27" threat radius (disembark plus 12" move plus 12" rapid fire and melta range). The Swordwind would also be very good at such close engagement ranges, but the Death Guard would be a tough nut to crack if they worked together.

The Swordwind won the roll so went second. The Chaos forces set up the three Death Guard squads in their Rhinos in a small phalanx, in the northeast table quarter. The two Demon Princes set up behind them. The Obliterators and Emperor's Children were held in reserve, with the Oblits deep striking.

The Swordwind held everything in reserve; everything that could be mounted would do so, and nothing would deep strike. My plan was to try and separate the Rhinos from each other with hit and run tactics.

A couple of Ambulls appeared, in the northeast and southwest table quarters. No combat yet.

The Chaos phalanx moved in a southeast direction, skirting the central area. By their second turn, they were about three feet into the southeast table quarter. They were in a line astern formation, with the Demon Princes hidden behind the bulk of the vehicles.

Most of the Eldar Forces arrived second turn, except for the two HQ's. Typical. The Warp Spiders and Fire Prism came on, respectively, about one foot and two feet from the nearest Rhino. Everything else skimmed into the southwest table quarter.

The Eldar made some good spotting rolls. This allowed the Warp Spiders to see, shoot and immobilize the first Rhino. The Prism landed a focused shot on the lead Rhino, disarming it and wounding a Demon Prince standing next to it. The Spiders then jumped 9" back towards the Prism. The rest of the Eldar vehicles shot at and killed the Ambull in that table quarter.

The Chaos guys then got attacked by an Ambull, but it was no match for the swordsmanship of the Demon Princes: 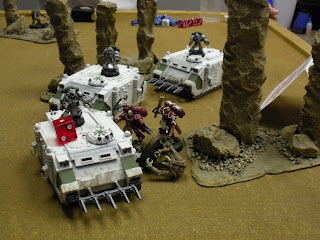 The two mobile Rhinos and the two Demon Princes moved west, trying to catch up to the swift Eldar. Disembarking, a meltagun nailed a Spider. The two Eldar characters showed up. They and most of the forces moved north. The Warp Spiders struck the closest Rhino again, immobilizing it. The Fire Prism moved about a foot west and again landed a focused blast on the same Rhino and the wounded Demon Prince. The Rhino lost its gun. The Demon Prince was wounded again. The Warp Spiders' second jump was only four inches.

The two Obliterator squads and the Emperor's Children finally showed up. Trying to teleport behind the Fire Dragons' Wave Serpent, one Oblit squad deviated and landed in the northwest table quarter. The other one deviated right onto the same Serpent. Oops. As a result of a roll on the Deep Strike mishap table, I placed that squad in the very northeast table corner, effectively putting them out of the game. The Children walked onto the table in the northwest quarter. 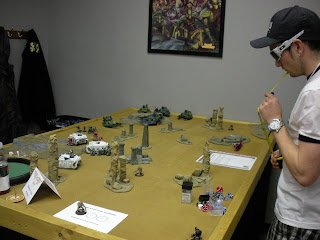 The first Obliterator squad managed to shoot down the Banshee's Serpent, forcing them to disembark. The wounded Demon Prince managed to catch and assault the Spiders, wiping them out.

The Fire Dragons disembarked and shot at the nearby Obliterators, killing one. The Banshees then charged and wiped them out. One Avenger squad dismounted. Their assault weapons' Bladestorm killed the already wounded Demon Prince. The Fire Prism killed a couple of Death Guard.

An Ambull charged the Fire Dragons. Through sheer desperation, they managed to fend off its blows, suffering no wounds.

The last Rhino and the surviving Demon Prince moved away from the action, seeking the shelter of a small hill and the support of the other Death Guard squads. 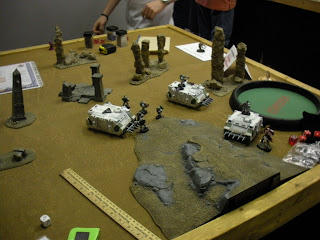 As the game wound down, the Eldar Avengers mounted up and moved with the other vehicles north and west. One Serpent and the Autarch moved to protect the dismounted infantry from an Ambull that was getting a little close. The Fire Prism lost sight of the Death Guard in the darkness. The rest of the Eldar vehicles laid fire on the Emperor's Children, who went to ground, killing only a couple. The Banshees came to the aid of the Fire Dragons, the Banshee Exarch killing the Ambull before it could swing again. 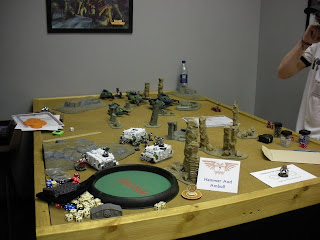 The Chaos forces had killed the Warp Spiders and had destroyed one Wave Serpent, for a total of 210 victory points. The Eldar had damaged two Rhinos, killed one Obliterator squad, and killed one Demon Prince, scoring 351 victory points. With only a 141 vp advantage to the Eldar, it was tie!

Though not a decisive engagement, the Eldar battle plan had basically worked. They had shut down the Chaos ability to concentrate their forces by denying them their mobility. If the game had continued, the Swordwind would have concentrated on the Emperor's Children then withdrew to the northwest corner, to try and seal a clear win.

Please click here for the third and final game's batrep .