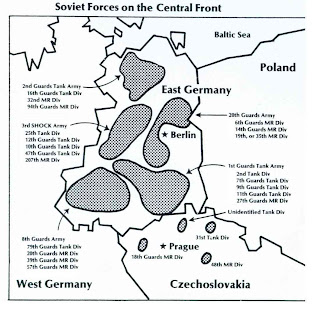 Now that balmy summer temperatures have arrived in Winnipeg, the Conscripts will cool off this week with some Modern Spearhead. The clock will be set to 1988, and our setting will change from the scenic splendour of the Fulda Gap, to northern West Germany, where the Soviet 2nd Guards Tank Army is blasting its way to the North Sea coast.

NATO doctrine calls for troops to trade space for time. The Bundeswehr don't quite agree, and a West German Panzer Division has decided to give the Russians a bloody nose. Be sure to join us on Wednesday night as the West Germans launch a sudden counter-attack. Will the Soviets be stopped? Driven back? Or chuckle at the attempted schnitzel speed bump as they roll on to the coast?
Posted by Greg B at 3:20 PM

We better watch out for Chemical Cam. Winning against him can be more dangerous than losing.

Pfft. Just because you cowards aren't willing to pull the trigger on MAD scenarios doesn't mean I won't call the West's pitiful bluff.

Hey - it's probably just malathion in that Scud warhead.